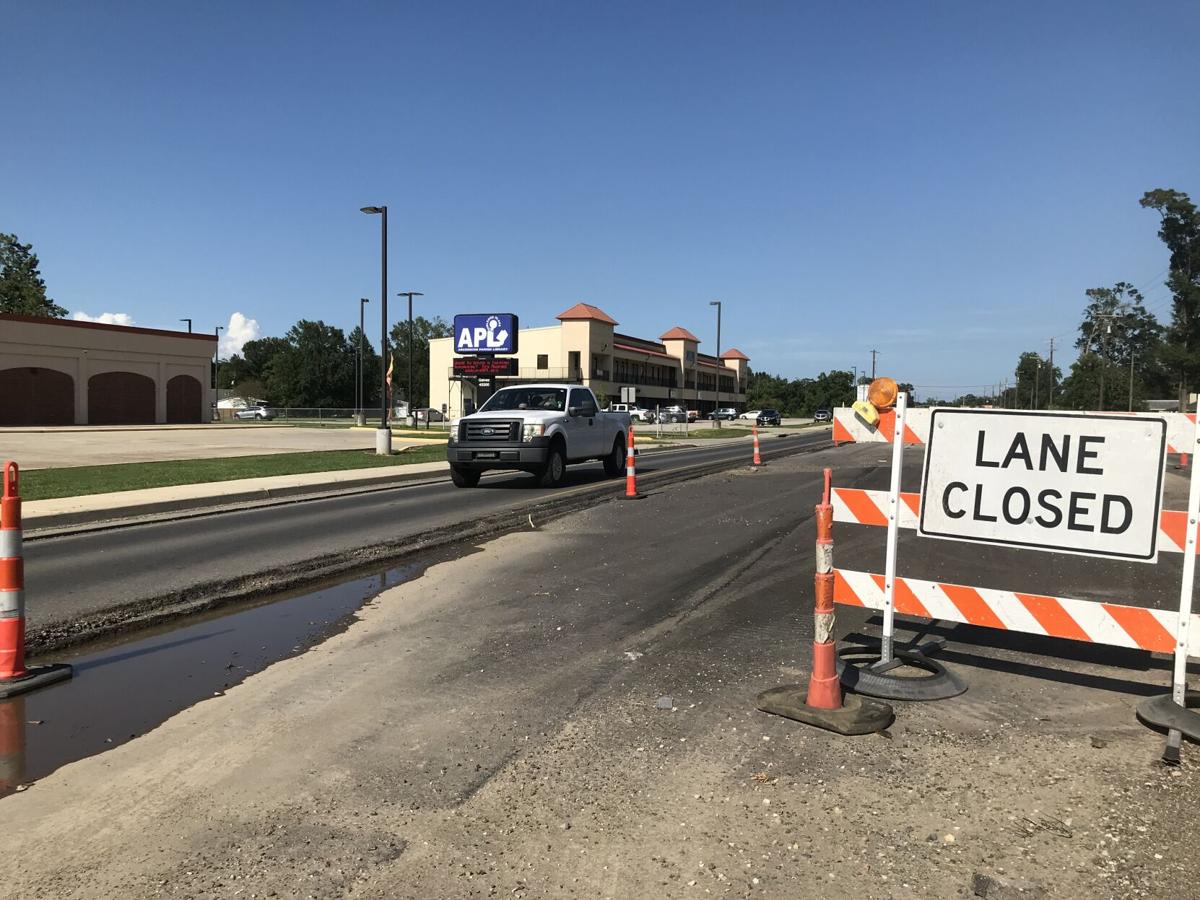 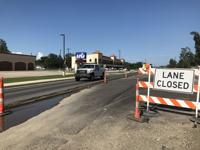 Afternoon traffic passes through a state construction zone on La. 42 and past the Galvez branch of the Ascension Parish Library Friday, July 17, 2020. Library officials are seeking a property tax renewal that would cut the rate by nearly 1 mill. Some are already eyeing the future millage capacity for roads. 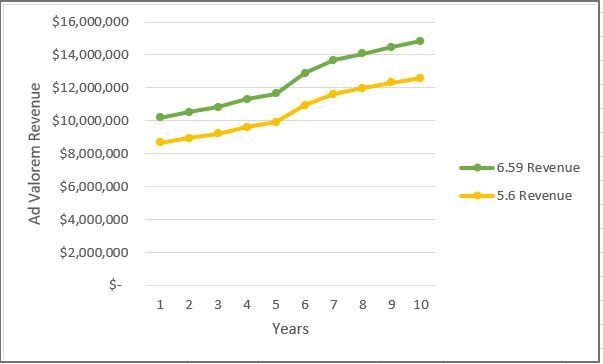 This table shows the difference in revenue growth for the Ascension Parish Library system from 2021 to 2030 between the existing millage rate and a reduction proposed on the ballot Aug. 15. Library officials are seeking a tax renewal that would lower the current millage rate by .99 mills, from 6.59 mills to 5.6 mills. The library has rolled back its millage rate in recent years to the current level but retains the legal authority to levy up to 6.8 mills. The ballot measure would reduce the maximum levy to 5.6 mills. Ascension library and Assessor's Office officials developed this graphic.

Afternoon traffic passes through a state construction zone on La. 42 and past the Galvez branch of the Ascension Parish Library Friday, July 17, 2020. Library officials are seeking a property tax renewal that would cut the rate by nearly 1 mill. Some are already eyeing the future millage capacity for roads.

PRAIRIEVILLE — When Ascension Parish voters head to the polls Aug. 15, they will be asked to weigh in on an uncommon question — whether to reduce a property tax.

Ascension Parish Library officials want voters to consolidate and renew the longstanding property taxes for the 60-year-old library system but at a rate 15% below current levels.

If approved, other parish officials say that could allow them to reroute money to improving roads without raising overall taxes.

Library officials say rising land values, new construction and an expanding industrial base will allow the four-branch library system to afford the cut in tax revenue and, along with reserves judiciously preserved by past leaders, continue previous expansion plans that include a new branch in St. Amant and big upgrades in Donaldsonville.

"We're hoping that this will be a good will gesture in our community and also show people that we are responsible with their tax money," said Jennifer Patterson, the library director.

In a parish that has roundly rejected new taxes for parish government over the past decade, some parish officials are now saying they may pursue the millage capacity the library could surrender to use for roads or other infrastructure.

"You know, I have had more than one councilman say to me, 'I would like to see it be utilized for roads,'" said Councilwoman Teri Casso, the council chair and a member of the library board. "I don't know of anything that is more needed in Ascension Parish than (roads) and that needs a dedicated revenue source."

If approved by voters, the library's two property taxes would be consolidated and reduced from a combined 6.59 mills to 5.6 mills. The tax is for 10 years. In 2020, 1 mill is projected to generate about $1.53 million.

A family with a $250,000 home would save $17.33 per year if voters approve the property tax reduction. Their annual tax bill for the library would drop to $98. Businesses would save considerably more.

The current library leadership has been willing to cut their tax levy before. During the 2016 reassessment year, the library board agreed to permanently give up 0.21 mills from the traditional 6.8 mills in combined property tax the system had collected for years beforehand with voter approval.

But, considered from a longer term view, the library's more recent push to trim its own tax rate represents a 180-degree turn from the past.

GONZALES — Improving roads, drainage and other infrastructure in Ascension Parish and finding a way to pay for that work without new taxes wer…

In 2010, as the council was then considering whether to put the library tax renewals on the ballot, then-Parish Councilman Chris Loar gave voice to an idea quietly discussed among some in the parish's political and business leadership at the time.

The parish library system and some other parish entities with longstanding dedicated property taxes were over-funded, they argued. Those taxes could be partially reprioritized toward the parish's ailing roads and other infrastructure needs without a tax increase and little pain to the entities that lost the revenue because of continued growth in land values and construction.

Loar proposed a 38% cut in the library's millage rate that could be rededicated later to roads. But he encountered opposition from the library's leadership and their patrons, who argued the reduction would gut services and expansion plans. Library officials prevailed in convincing a majority of the council to put the existing millage rates on the ballot that fall. Voters endorsed them more than 2-1.

A decade later, with those taxes back up for renewal, new leadership at the library system had gone into a two- to three-year dive into their finances and worked with the Assessor's Office before proposing the cut.

"We pretty much went down line by line and looked at expenses and what can we control and run better," said Henry Schexnayder, the chairman of the library board and a banker.

With the reduction, the library's annual revenue would drop by $1.5 million to $2.2 million annually. Based on the assessor's projections, the library would need six years to surpass what it would collect in the first year if the existing rates were renewed, when revenues are projected to hit nearly $11 million.

Large industrial tax exemptions granted in the late 2000s and early 2010s, when plants like CF Industries underwent major expansions, are expected to end in the mid-2020s.

Even with the downturn caused by the novel coronavirus shutdown, Assessor M.J. "Mert" Smiley Jr. said, the 10-year projections remain solid: "I don’t have any doubt, unless the economy would just take a huge dive, and we're recovering already. I don’t see those (revenue projections) as unrealistic at all."

The push to cut the library taxes has come as library officials are charting a more modern vision for the system. While plans include adding new buildings with plenty of books, the board has shifted from large stand-alone libraries toward a community center concept that joins them with other government entities and recreational amenities. These branches would also expand on electronic and other offerings to specific communities and younger generations more geared to online information.

"So, the library had to acknowledge, recognize and appreciate that it continues to have a role in this new way of gathering knowledge, but it has to be relevant. It could not continue to be the library of the '50s and '60s. It can't," Casso added.

Library tax issue may get on ballot

Parish and library officials say the library's decision to seek a reduction in the rate is independent of the discussions to use the leftover millage for roads at some future date. Ideas about using that taxing capacity for infrastructure are in the discussion stage.

Traffic has been a chronic complaint in Ascension for more than two decades. The parish's top-ranked schools and booming industrial sector have allowed Ascension to flourish into a Baton Rouge suburb. The parish population has grown by 65% between 2000 and 2019, hitting an estimated 126,604 people in July 2019, census data show.

But the parish only has a two-thirds of a half-cent sales tax dedicated to road construction. Approved by voters in 1994, the sales tax generates around $8 million per year, which officials say isn't enough to finance major capacity road projects.

Councilman Aaron Lawler, who followed Loar in representing one of Ascension's high-growth Prairieville districts, said he is open to using the forgone library millage for roads. He would prefer, however, a new sales tax because it generates more money and, he says, is more broadly shared. But Parish President Clint Cointment opposes the idea of a new sales tax.

"Right now, we're not keeping up," said Lawler, who is the council transportation chairman. "Not just with growth, but with what has happened in the past. We need improvements."