In a letter to staff Monday, Louisiana Attorney General Jeff Landry defended his handling of sexual harassment complaints against one of his top aides, encouraging staffers to report misconduct but complaining that "a hostile media environment" has affected the office. 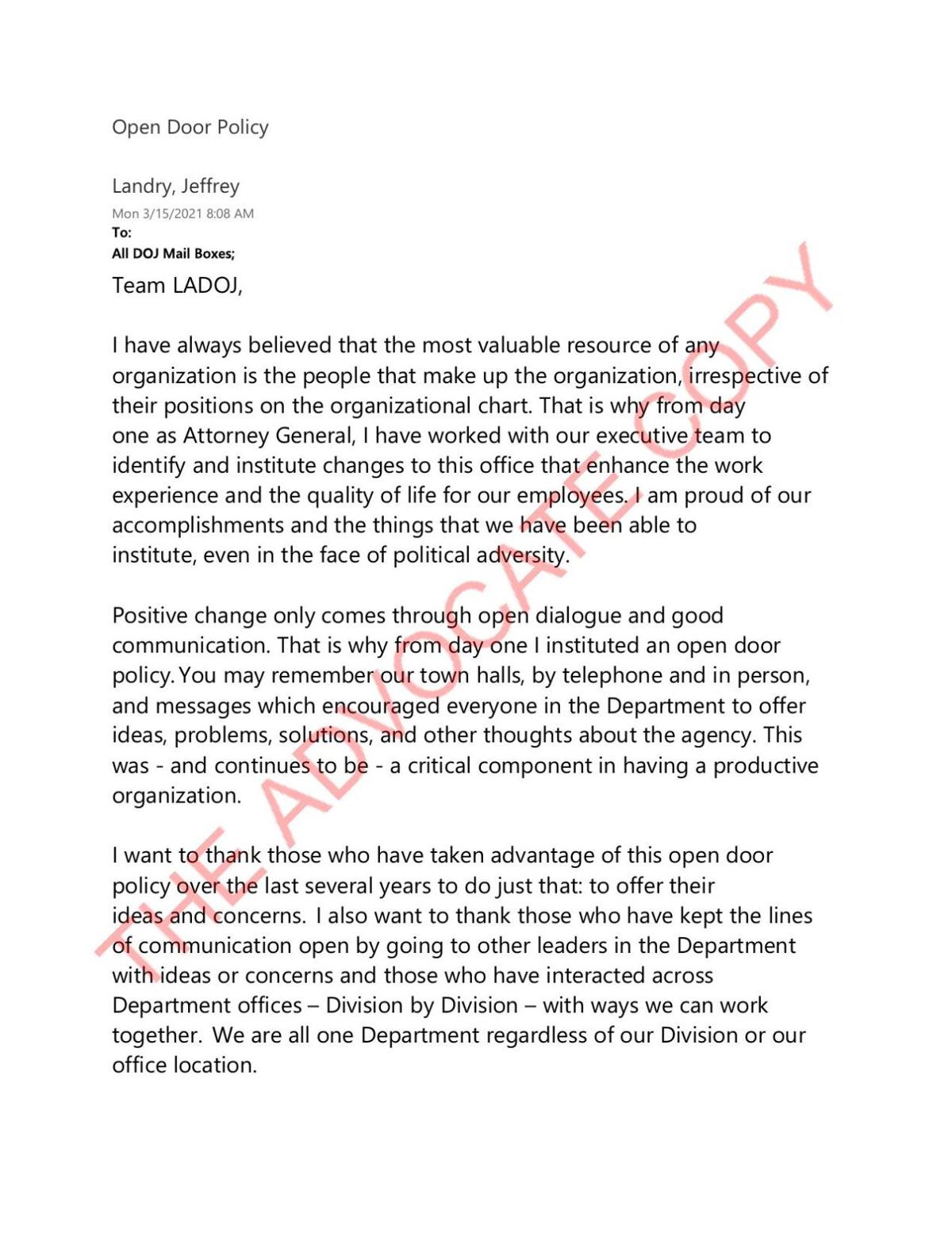 One of Landry's top aides, criminal division director Pat Magee, resigned from his job last week as The Advocate | The Times-Picayune was preparing to publish a story about a second sexual harassment complaint surfacing against him. Magee was the subject of an earlier complaint last year, and Landry's office filed a lawsuit against the reporter who sought a copy of it.

Nineteenth Judicial District Judge Tim Kelley ruled the complaint should be released to the public after Landry sought to have it sealed. Kelley issued redactions to protect the names of potential victims of witnesses, and the complaint described Magee's interactions with and comments about several women. The complaint said that he would not promote one because her good looks made him worried about controlling himself around her sexually; while he requested for another to enroll as co-counsel on a case because "male jurors would want to have sex with her."

To outraged Louisiana lawmakers, it’s been hard to miss the parallels in a pair of sexual harassment scandals that have engulfed LSU and state…

An investigation into Magee from the law firm Taylor Porter found some of his comments unprofessional but said they did not rise to the level of sexual harassment. Landry's office has yet to release that investigation.

Magee said upon his resignation that the allegations against him were "false and unjust." He defended the investigation that concluded he did not sexually harass employees and said he does not condone sexual harassment.

In his letter to staff, Landry wrote that he has an "open door" policy and that employees should feel free to make their concerns directly known to him if they have concerns about how they are being treated. And though Landry did not fire Magee, he said anyone engaging in sexual harassment would lose their job.

"First and foremost, sexual harassment is wrong and it will not be tolerated in this office," Landry wrote. "It does not matter your division, your job title, or your length of service; if you found to be engaging in this type conduct you will no longer be employed. Actions have consequences, and no one is above reproach."

Landry also defended his recent lawsuit against an Advocate reporter, saying he felt that revealing information about sexual harassment in his office would be "counterproductive to protecting the rights of those who may wish to express concerns." Kelley disagreed, however, saying that redacting names of employees and in some cases their titles would be sufficient -- remedies this newspaper had proposed before Landry filed suit.

A former Attorney General's Office employee, who filed the second complaint against Magee last week, alleged that his harassment prevented her from pursuing the types of cases she was interested in. She alleged that Magee gave women assignments like traffic tickets, while he encouraged men to take serious criminal cases.

But Landry wrote that he has tried to shield his employees from attempts to distract from their great work.

"We believe in transparency, that light is the best source of disinfectant," Landry wrote. "That is why we provided, to the media, upfront not only the findings of the investigation but also the discipline applied in this most recent case at hand. It was not hidden."

His comments notwithstanding, Landry received a "Black Hole Award" Monday from the Society of Professional Journalists, a national organization. The annual award, given to an American public official for an act of "outright contempt of the public’s right to know," is bestowed during Sunshine Week, which runs this week.

Inside the complaint against top Jeff Landry aide: 'Jurors would want to have sex with her'

Landry wrote that his staff made no attempt to hide any information. He accused the media of using hyperbole to "sell newspapers and gain eyeballs" on TV news.

"It is unfortunate; and, as they say, no good deed goes unpunished," Landry wrote.

The journalists' group, however, said that Landry's lawsuit could create a chilling effect on any future efforts to get records from the Attorney General's Office, especially when they come from smaller newsrooms, freelancers or others who fear the monetary burden of being sued.

"Open — truly open — records are crucial to maintaining our fragile democracy, and all citizens benefit from transparency in government," said SPJ Freedom of Information Committee Chair Haisten Willis. "Attempting to bully someone out of holding government officials accountable has earned the Louisiana attorney general a well-deserved Black Hole Award."

Our Views: It was tell-the-truth Monday for Jeff Landry, and the picture isn't pretty

Now we know what Attorney General Jeff Landry was trying to hide when his office lied about a sexual harassment complaint against a key aide, …