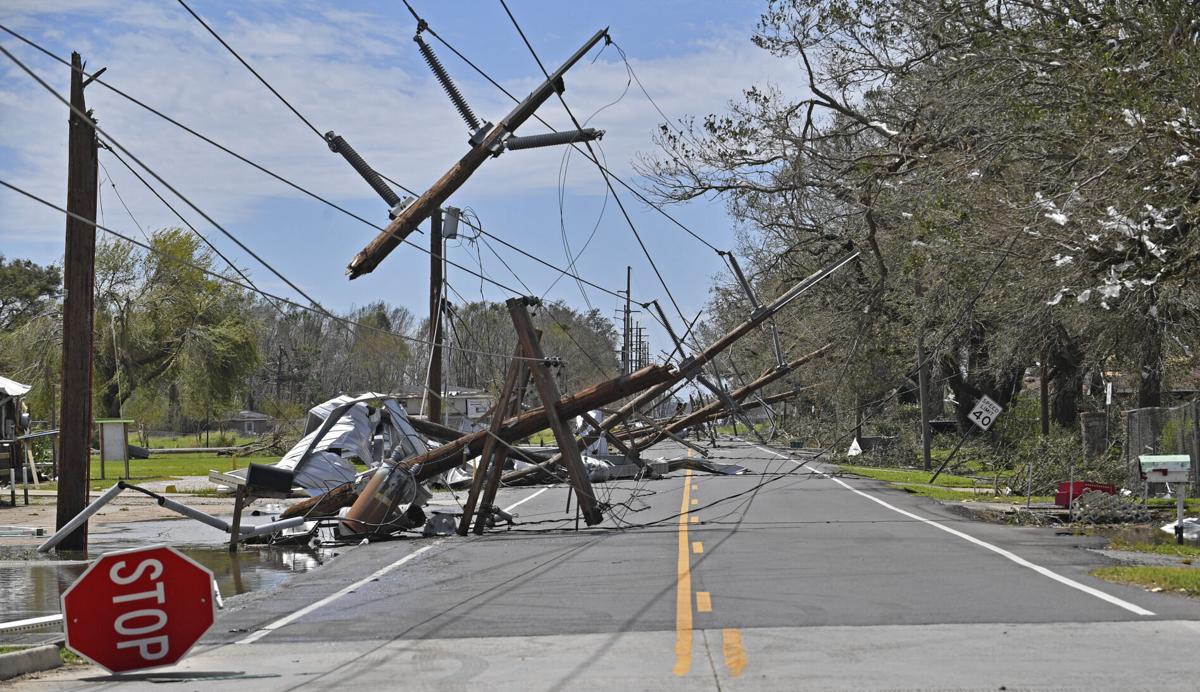 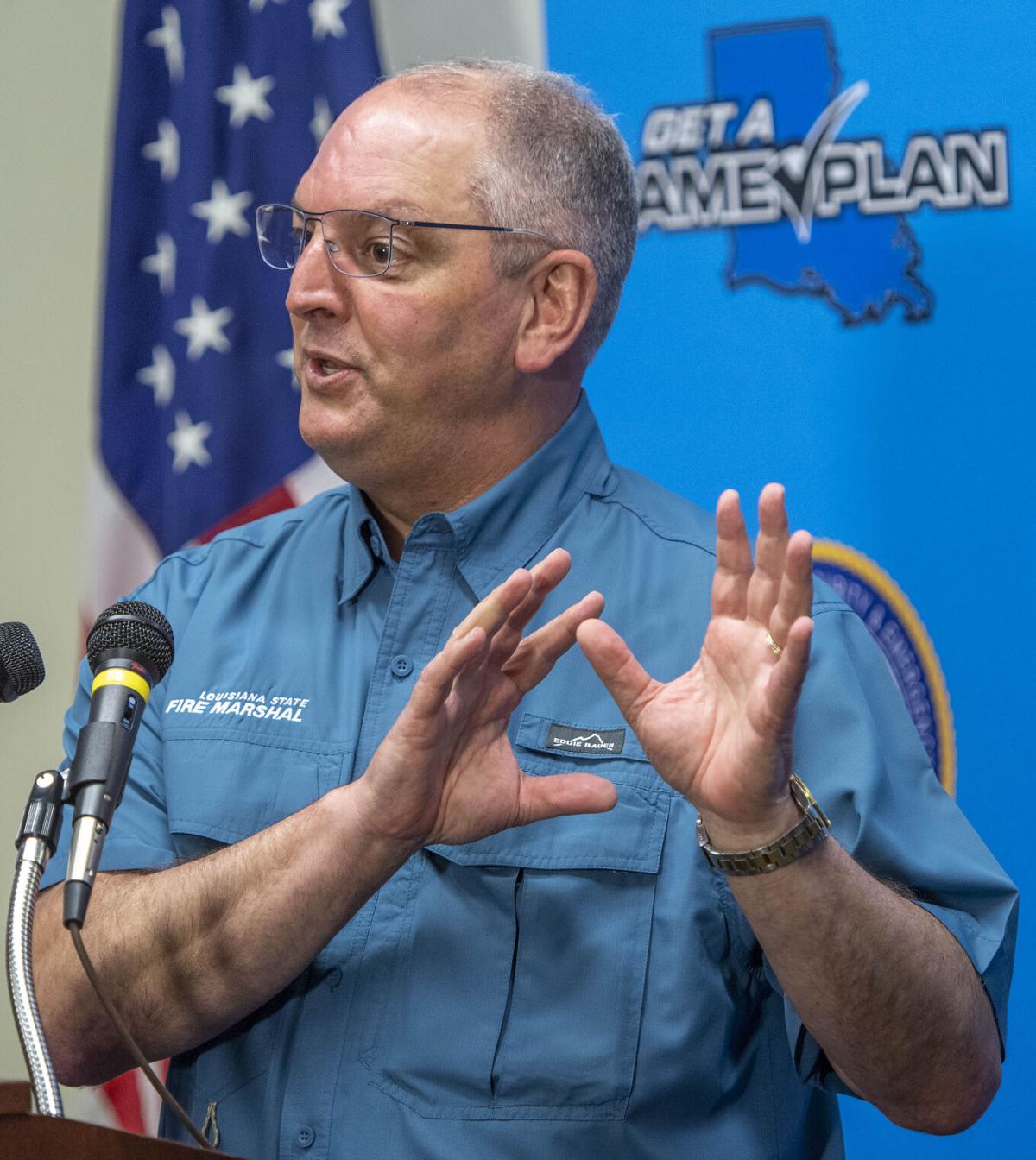 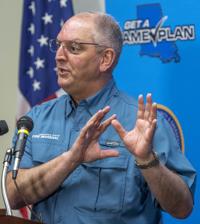 Gov. John Bel Edwards answers questions during a media briefing about the state's response to Hurricane Laura and the state's status concerning the Coronavirus Monday August 31, 2020, in Baton Rouge, La. 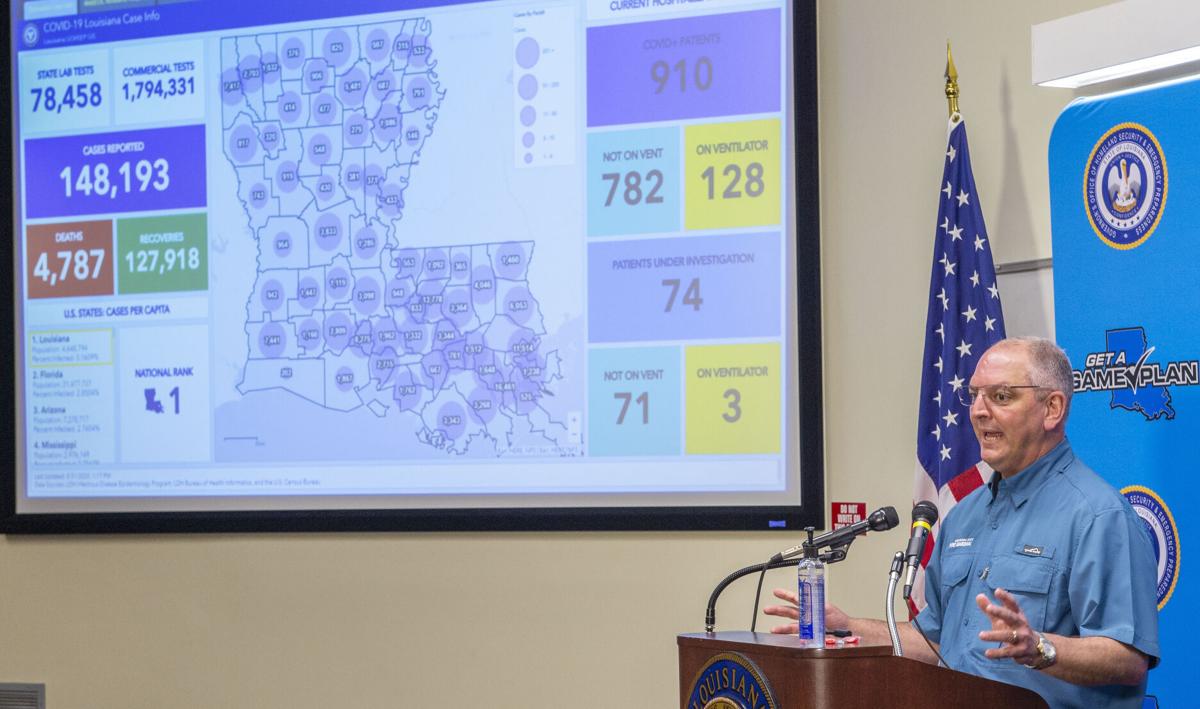 Gov. John Bel Edwards answers questions during a media briefing about the state's response to Hurricane Laura and the state's status concerning the Coronavirus Monday August 31, 2020, in Baton Rouge, La.

Power outages in the Lake Charles area will take about three weeks to repair in the wake of Hurricane Laura, Gov. John Bel Edwards said Monday.

Edwards made his comment after meeting with Phillip May, president of Entergy Louisiana, and others four days after the Category 4 storm upended lives in southwest Louisiana and, to a lesser extent, central and north Louisiana.

John Bel Edwards: Restoring power after Hurricane Laura will be 'long and difficult'

Gov. John Bel Edwards said Sunday that, while gains are being made, restoring power to the Lake Charles area after Hurricane Laura is going to…

Outages total about 324,000, down from more than 600,000 immediately after the storm arrived early Thursday morning in Cameron Parish.

About 17,000 Entergy and workers from other utilities representing 29 states are in the field.

Edwards said he expects power to be restored to most damaged locations in central and north Louisiana in the next two or three days.

"But the damage to the grid infrastructure in southwest Louisiana from Cameron Parish to Vernon or so is very extensive, especially in Calcasieu," he said.

Lake Charles is in Calcasieu Parish.

The governor on Sunday said initial estimates of about 170 downed or damaged towers in the Lake Charles areas has been increased to around 500.

Thousands of residents whose homes largely escaped damages from Hurricane Laura have had to find shelter elsewhere because of a lack of power or water.

Edwards said he has been encouraged by the number of water systems that have been revived when power was restored in central and north Louisiana.

But other water systems suffered heavy damages that will require extensive work, not just the resumption of power.

As of Monday morning, more than 177,000 people were estimated to be without access to water because of the storm. Several thousand more were under a boil water advisory, while around 4,000 had their water systems cleared from a boil advisory so far.

The city of Lake Charles water system took major damage, officials have said, and contractors have raced to patch up treatment plants to restore service to the more than 80,000 residents. Lake Charles City Hall on Sunday asked residents that do have water to conserve it as pressure levels rise throughout the city. Officials also told residents to boil their water.

“Water should be used for essential needs only at this time and citizens are asked to not use water for nonessential tasks such as washing windows, vehicles, driveways, etc,” the post said.

Edwards noted that, in some cases, wells or treatment plants were wobbly before the storm struck. "We have been talking about water infrastructure in Louisiana for a long time," he said.

The death toll from the storm is 15, including eight people who died from carbon monoxide linked to generators.

Edwards said FEMA has launched the blue roof program – temporary roofing that also dotted the Lake Charles landscape after Hurricane Rita struck in 2005. "You have seen this in Louisiana before but it is incredibly important," he said.

Once officials get the clearance from qualified homeowners, including an inspection, the temporary roofs can be installed and allow residents to remain in their homes until long-term repairs are made.

Similar declaration requests are pending for 17 other parishes.

Those already in the program do not have to register for the disaster assistance.

Those who do not now get the benefits but who had lost wages or damages from the hurricane can qualify if they register.

A total of 10,057 evacuees are staying in hotels statewide, mostly New Orleans.

Hotels are being used to avoid close quarters in traditional hurricane shelters because of the coronavirus.

More than 4,000 evacuees are staying in hotels in Texas.

The state reported 324 new positive cases of the coronavirus Monday, below the rate of recent days, and 19 new deaths.

"Hurricane Laura has reduced our ability to do robust community testing," Edwards said.

"At a time when I would like more testing than ever ... we really are at a low point for our community testing."

Sam Karlin of the Capitol news bureau contributed to this report

We went to Cameron to see Laura's damage: 10 feet of water crushed homes and washed-up caskets