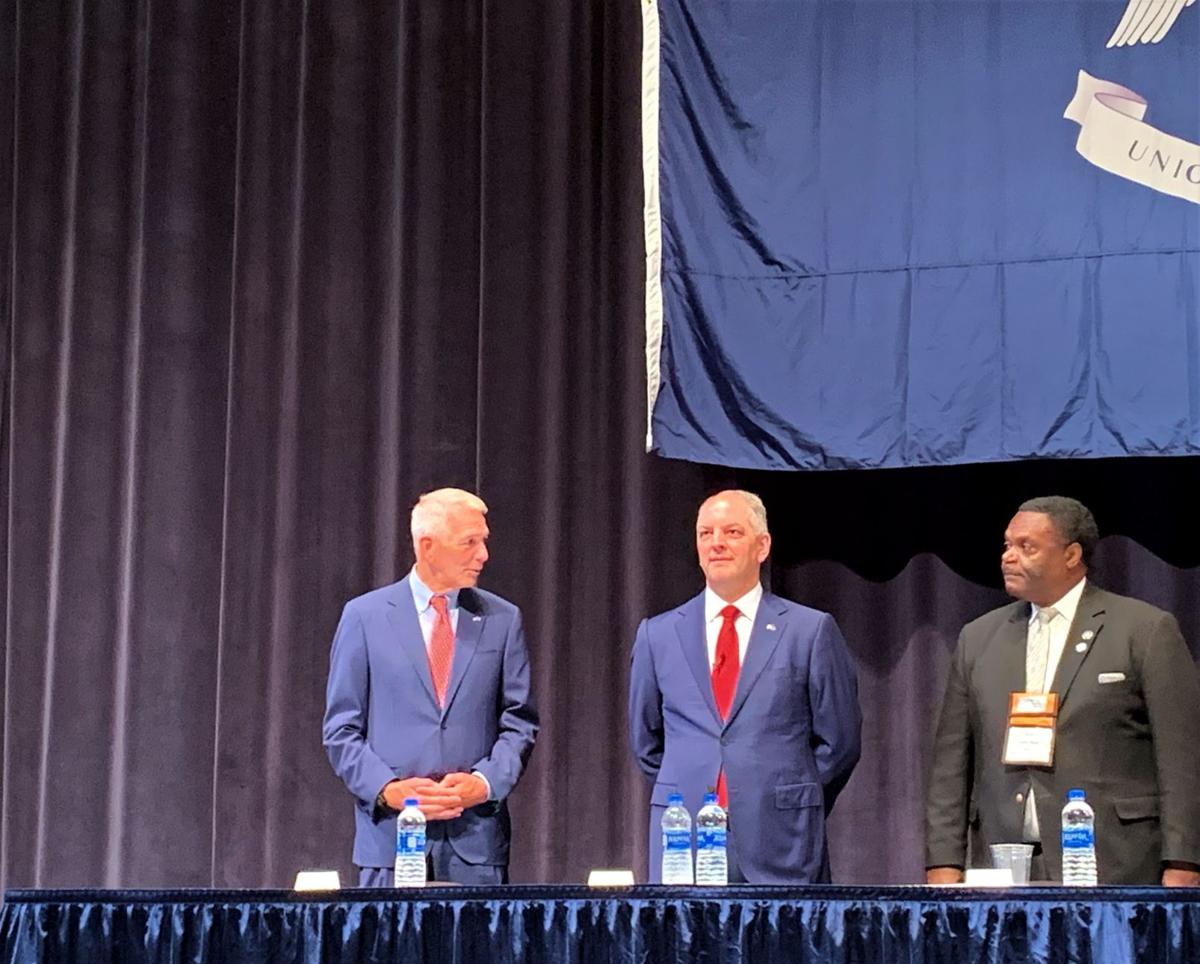 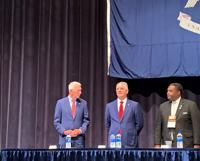 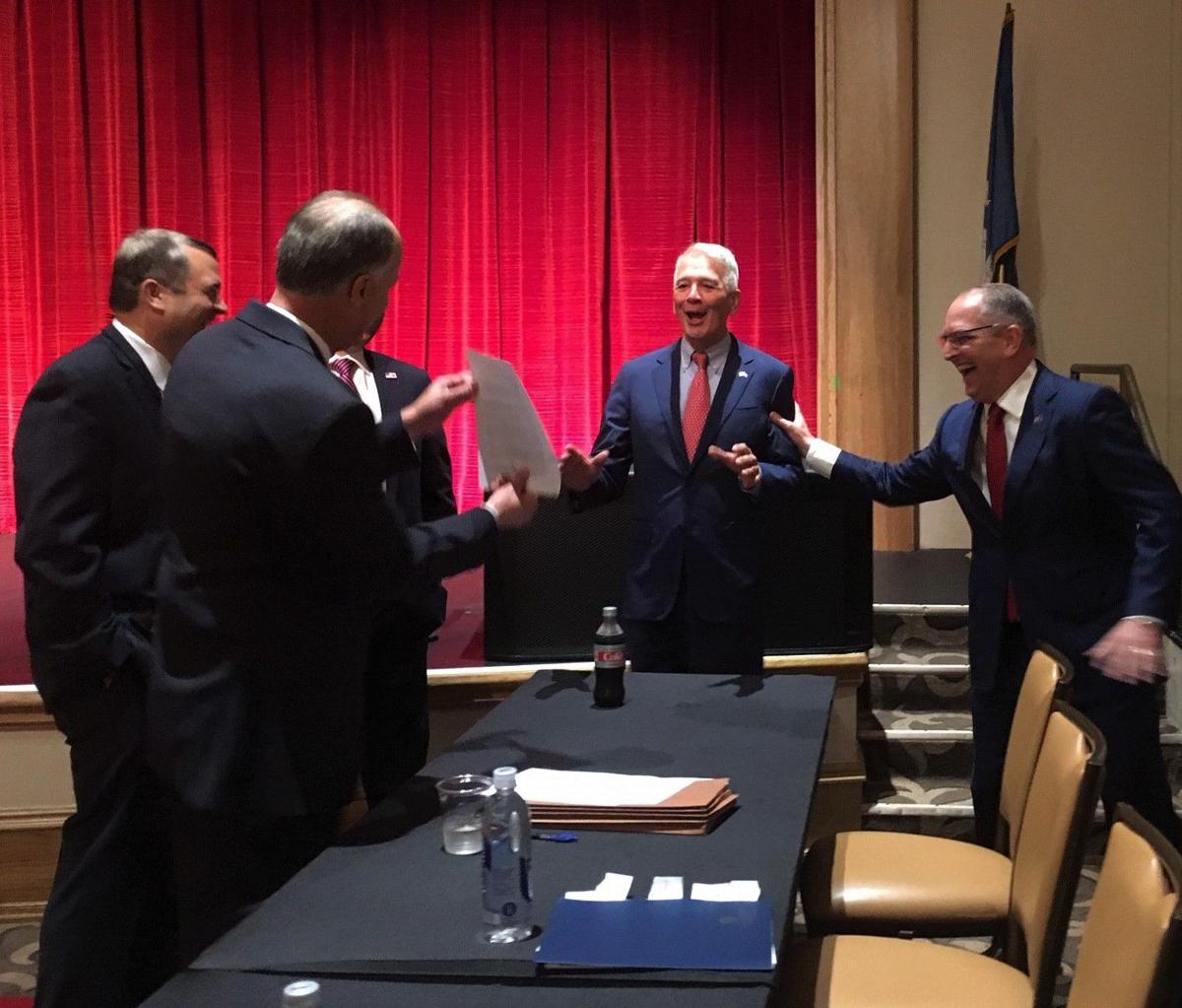 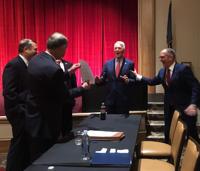 Gov. John Bel Edwards, right, and one of his election opponents, U.S. Rep. Ralph Abraham, R-Alto, share a laugh on Thursday, Aug. 1, 2019, before making a presentation to sheriffs at a function in Baton Rouge.

Gov. John Bel Edwards, right, and one of his election opponents, U.S. Rep. Ralph Abraham, R-Alto, share a laugh on Thursday, Aug. 1, 2019, before making a presentation to sheriffs at a function in Baton Rouge.

MONROE — Gov. John Bel Edwards and Congressman Ralph Abraham, two of the three major candidates for governor, squared off Thursday in two forums on opposite ends of the state, delivering a slate of promises to sheriffs and local officials on funding, taxes and hiring decisions.

Edwards, the Democratic incumbent, battled with Abraham on taxes, criminal justice reform and tax incentives for industry. Both vowed to deliver more funding to local law enforcement in a morning forum before the Louisiana Sheriffs Association in Baton Rouge, as they angled for an endorsement from the influential group.

Afterwards, the two trekked to Monroe to give stump speeches at the Louisiana Municipal Association’s annual event, making more promises to expand broadband internet and invest in local infrastructure.

The other major candidate, Eddie Rispone, was invited to both events but did not attend, with his campaign citing prior commitments. Rispone, a wealthy businessman who is self-funding his campaign and is advertising heavily on TV, took criticism from Edwards for not showing up.

Abraham’s campaign strategist Lionel Rainey said he “can’t figure out why any candidate wouldn’t show up” to the morning forum. Abraham declined to comment on his absence.

Lane Grigsby, a major GOP donor and ally of Rispone, said he doesn’t think people are paying attention to the forums yet. Qualifying in the race happens next week, marking the official start of the campaign, and the primary is Oct. 12.

“It’s summertime,” Grigsby said. “Political guys like you and me are paying attention right now, but that’s a small part of the population.”

While Abraham is the leading GOP challenger in the polls, Rispone wields a considerable funding advantage, due entirely to more than $10 million in loans he has made to his campaign. He has begun a TV ad blitz focused on President Donald Trump and immigration. Grigsby suggested the poll numbers will shift considerably by the end of the August, and he believes Rispone will be the candidate to advance to a Nov. 16 runoff with Edwards.

Louisiana’s open primary system pits all candidates, regardless of party affiliation, against each other Oct. 12. If no candidate wins more than 50%, the top two advance to a runoff.

Rispone’s campaign spokesman, Anthony Ramirez, said the candidate “looks forward to debating his fellow candidates later this fall” in televised debates, “proving that John Bel’s failed record is the reason why Louisiana is ranked last in every important metric.” He also likened Rispone to Trump, a key part of the campaign’s strategy so far.

For Edwards and Abraham, Thursday was full of detailed questions from sheriffs, who sought to pin down the candidates on whether they would increase supplemental pay and per diem rates paid by the state to sheriffs for housing state inmates. The moderator, Jefferson Parish Sheriff Joe Lopinto, asked the candidates if they would support a constitutional convention, and both said they opposed the idea.

The candidates largely agreed they would deliver more money to sheriffs if elected and let the law enforcement chiefs have influence over policy and hiring decisions for top state law enforcement posts.

Edwards, who comes from four generations of law enforcement officials and whose brother, Daniel Edwards, is the Tangipahoa Sheriff, said he is confident he’ll again win the endorsement of the Louisiana Sheriff's Association.

Abraham promised a hefty increase of $7 to $10 a day to the per diem rate for sheriffs housing state inmates in local jails, which is money that is paid by the state directly to sheriffs. He did not say where specifically he would get the millions of dollars to pay for it, saying instead the “money is there” in the budget.

At both events, Edwards contrasted the state’s current budget surplus and recent investments in education with the budget shortfalls of the former Gov. Bobby Jindal administration. The governor also announced the state will have a roughly $300 million budget surplus for the fiscal year that ended June 30.

Abraham highlighted the state’s poor performance and argued the economy is floundering. He accused the governor of driving people and business out of the state, and said he would deliver incentives to businesses if elected.

"We have got jobs that are leaving our state in droves," he said. "We’ve got to get our Louisiana residents back."

While promising to cut taxes and close loopholes in the tax code, Abraham also vowed to deliver funding increases to sheriffs and other priorities. That drew a rebuke from Edwards, accused his opponent of making promises he can’t keep.

“The congressman really believes he can run Louisiana the way they run Washington, where they don’t have to put forth a plan to pay for anything,” Edwards said after the event, at L’Auberge Baton Rouge Casino & Resort. “He’ll promise anybody any increase in expenditures and he has yet to put forward a plan to allow him to carry out any of those promises, including the ones he made to the sheriffs here today.”

Abraham suggested economic activity from tax cuts would pay for themselves.

While the congressman sided with business interests on things like changing the legal code to be friendlier to companies, he also broke with influential business groups like the Louisiana Association of Business and Industry on whether to centralize the collection of sales taxes. Business groups support centralizing the collection. Abraham opposes the idea, he told local officials – many of whom want to keep tax collections local.

Abraham criticized reforms Edwards made to ITEP, a lucrative tax break for industry that for decades exempted billions of local property taxes to manufacturers, without local input.

The governor won applause from the LMA crowd when discussing his reforms to the Industrial Tax Exemption Program that added local input into which projects the state would grant property tax exemptions. Abraham suggested Edwards' changes were driving businesses away, but later indicated he supports keeping some local control over the program.

Candidates to officially qualify for governor's race, other fall elections this week

The race for Louisiana governor has generated little heat so far, but that seems likely to change beginning this week, when candidates officia…