Most Louisiana residents say they want the Legislature to get the state's budget under control using a mix of tax hikes and spending cuts, according to a new report out Monday.

LSU's Public Policy Research Lab on Monday released the initial findings of its 2017 Louisiana Survey, an annual polling of residents' attitudes toward key issues in state government and beyond.

According to its findings, 71 percent of respondents said they want lawmakers to take a combined approach of tax increases along with spending cuts as they reach a balanced spending plan for the budget that begins July 1. The state faces a more than $500 million shortfall to keep things level in the coming year.

"It's somewhat conventional wisdom that Louisiana is an anti-tax state," Mike Henderson, the director of the Public Policy Research Lab, told the Press Club of Baton Rouge at its regular luncheon on Monday.

But Henderson said that the survey's findings indicate that attitudes may be more complex.

"That doesn't mean that the public just wants to raise taxes to spend on anything," he said.

Those eager for details of Gov. John Bel Edwards' tax-reform plan will have to wait longer

Gov. John Bel Edwards is pushing back the public release of his tax overhaul package, probab…

More than half of respondents said that they would support increased taxes on specific areas of the budget including: K-12 education (62 percent), higher education (59 percent), health care (53 percent) and transportation (57 percent).

"When pressed, however, these individuals tend to emphasize spending cuts more than tax increases — a result that stands in contrast to their fiscal preferences when asked about specific areas of spending," the report adds.

The LSU Public Policy Research Lab report is based off responses from 1,012 residents in live interviews by cellphone or landline. The margin of error is 3.1 percentage points.

Monday's release is the first of six that are expected to show Louisiana residents' views on various topics. The first installment focuses heavily on attitudes about taxes.

The report comes as lawmakers and Gov. John Bel Edwards set out on recommendations for shoring up the state's finances. The Legislature met in a February special session to address the state's 15th midyear budget deficit in nine years.

About two-thirds of the respondents said they believe the state budget could be pared back without harming services.

"These perceptions may play a role in explaining the apparent discrepancy among the roughly one-third of Louisiana residents who want neither to cut spending for specific policy areas nor to raise taxes to cover the costs," the report notes. "On average, these individual believe that 11 to 20 percent of state spending could be reduced without reducing services."

"When informed of the relative tax burden, opinions that the state’s personal income tax and sales tax are too high drops by seven and nine points, respectively," the report found.

Survey participants were asked whether various income levels and businesses paid their fair share in taxes.

A majority of respondents said that the upper-income people (55 percent) and corporations (57 percent) paid less than their fair share. 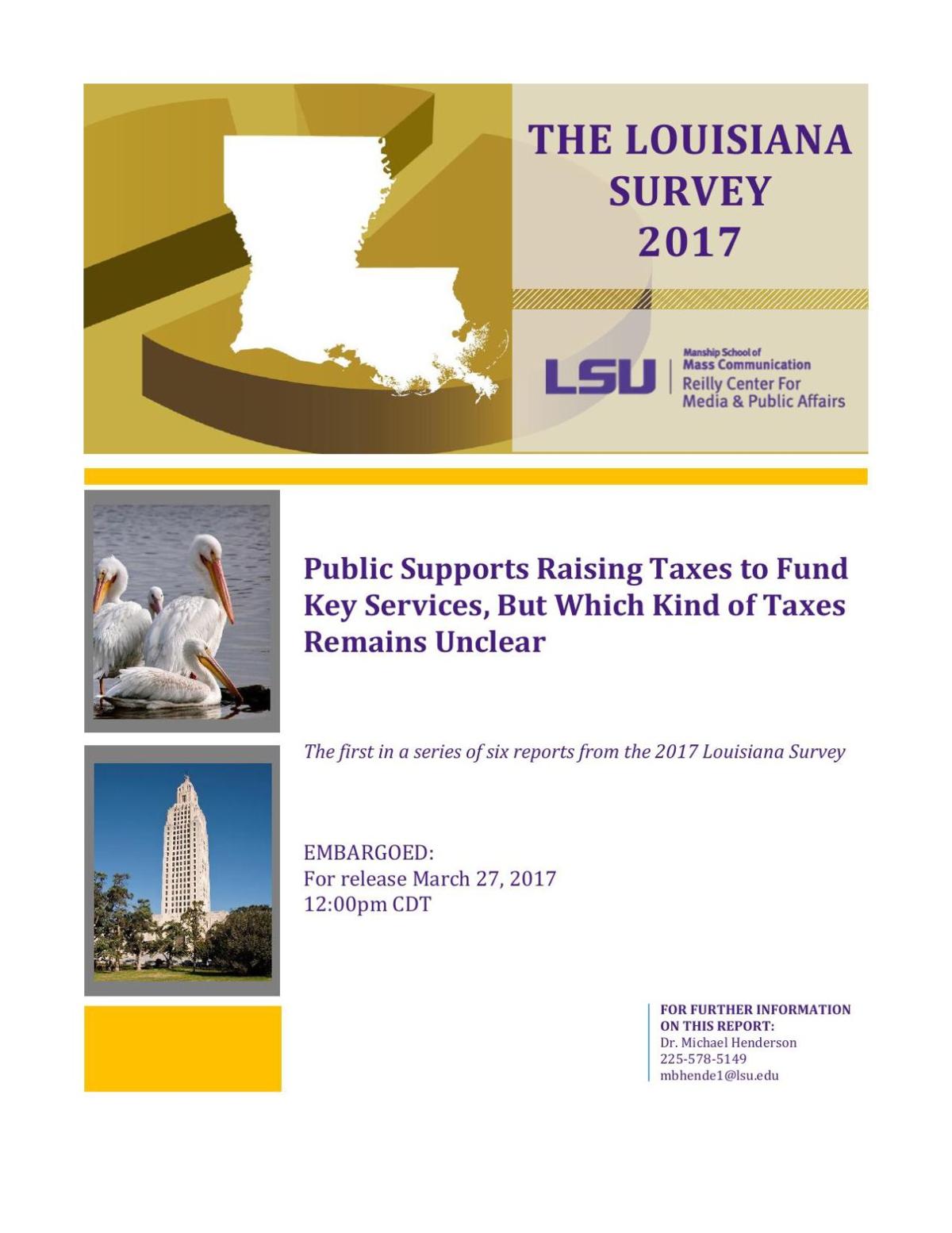 For the first time in five years, more Louisiana residents believe the state is heading in the right direction than those who think it's movin…

More than half of Louisiana residents don't think the state's criminal justice system is fair, and many more say they support efforts to overh…

Replay or reform? High expectations for the 2017 session of the Louisiana Legislature