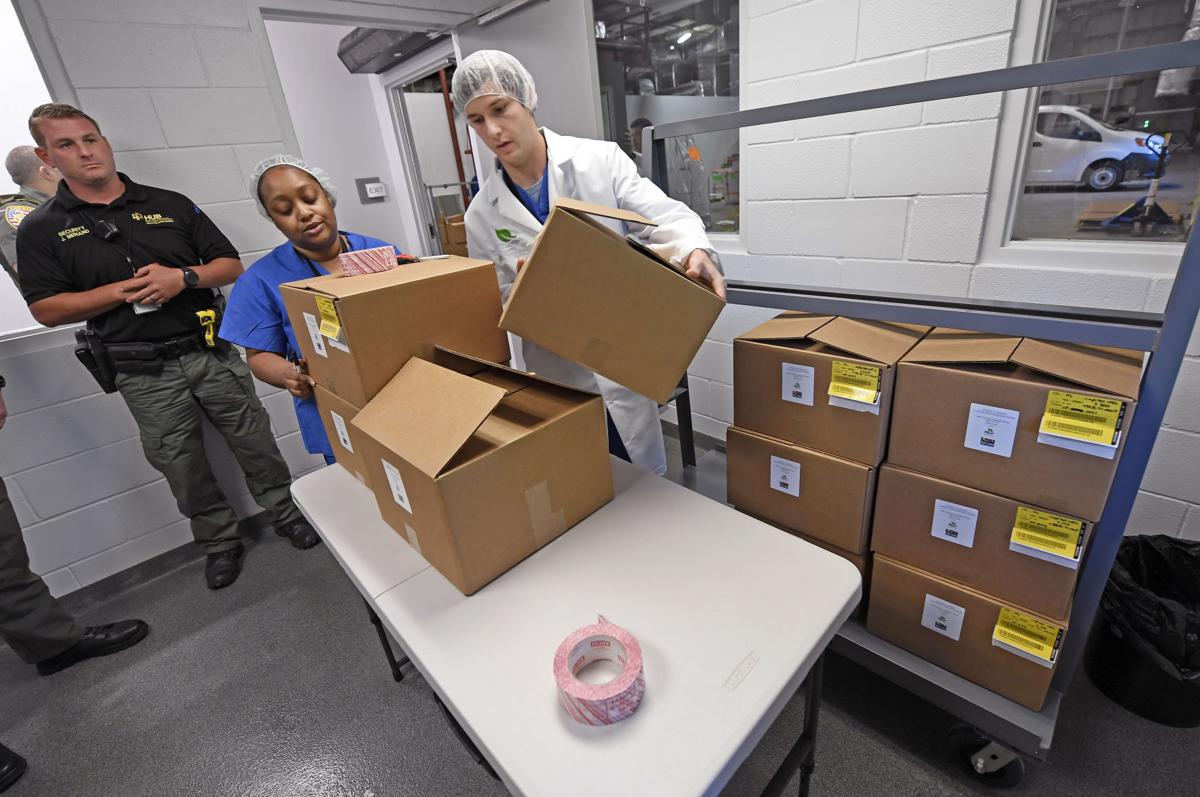 Boxes of medical marijuana are brought in to be checked, sealed and shipped at the GB Sciences grow facility. After years of delays, medical marijuana will finally reach the pharmacy shelves Tuesday August 6, 2019, in Baton Rouge, La. 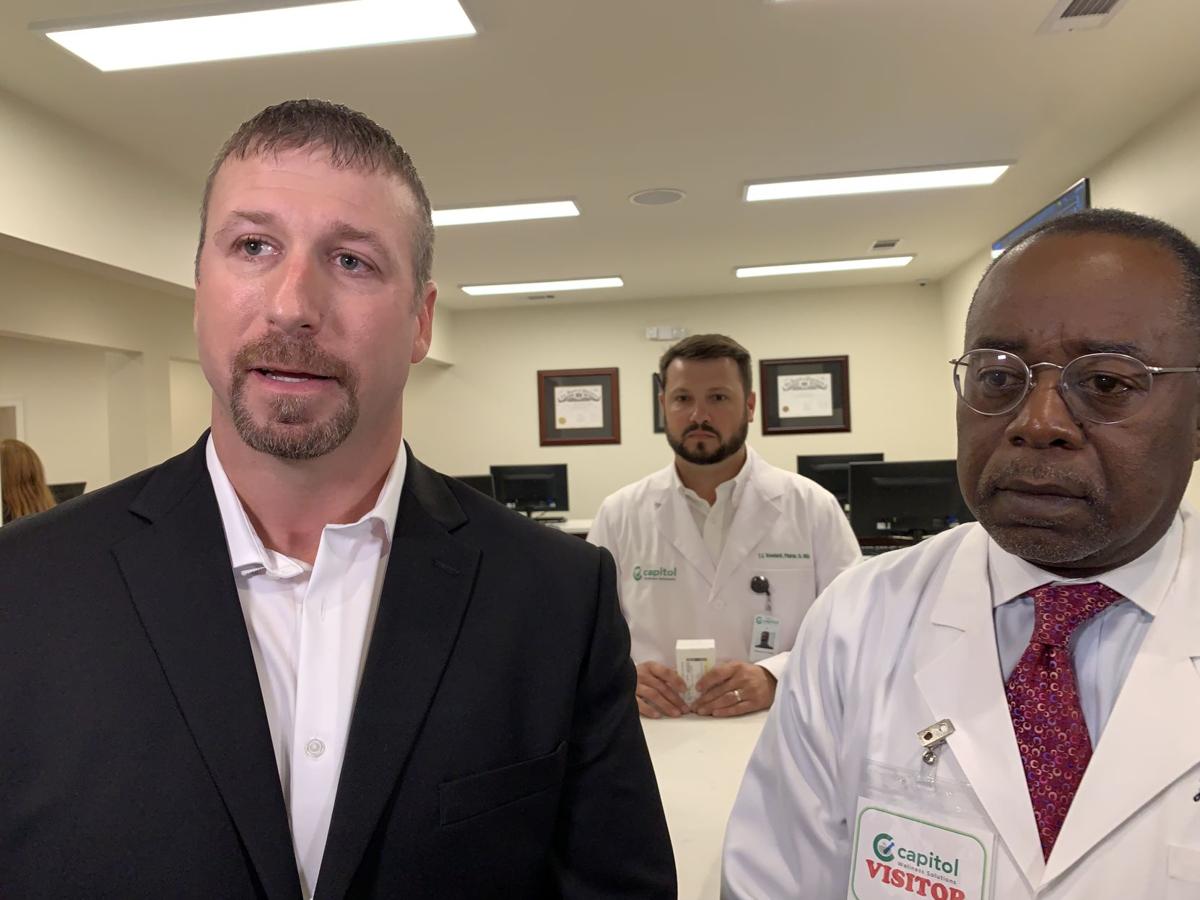 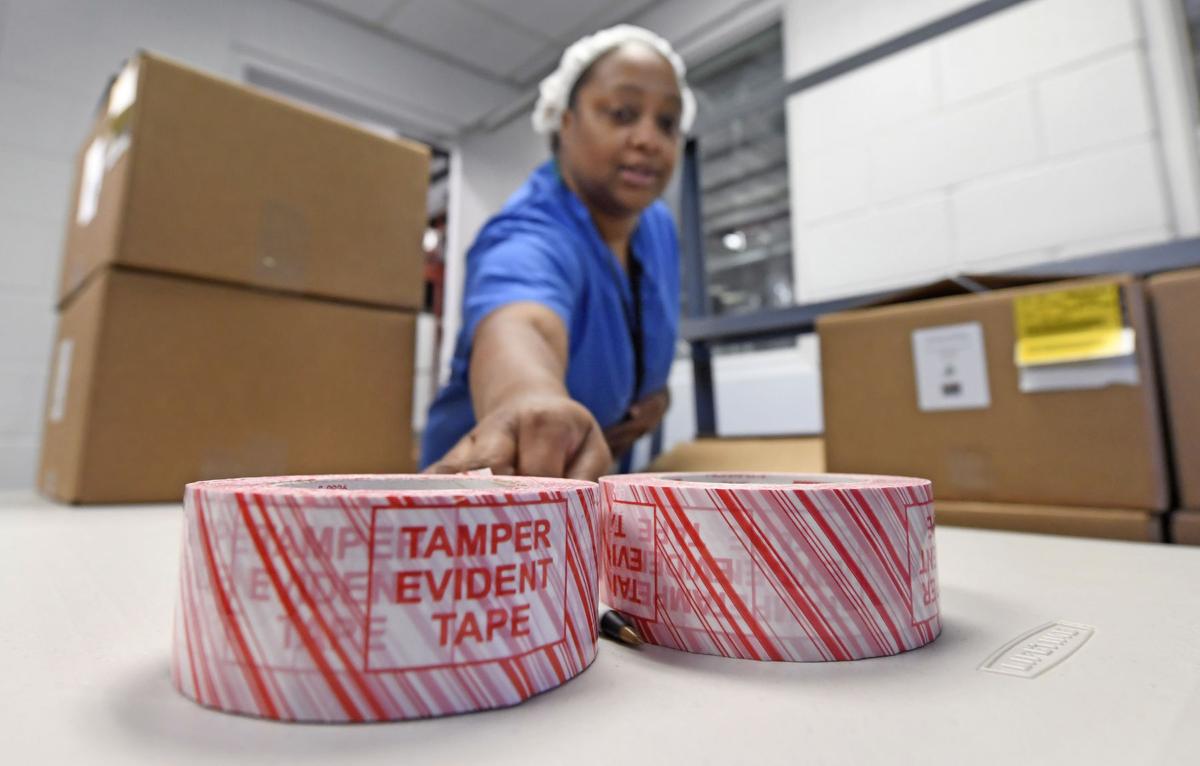 A tech reaches for the tamper evident tape to seal boxes at the GB Sciences grow facility. After years of delays, medical marijuana will finally reach the pharmacy shelves Tuesday August 6, 2019, in Baton Rouge, La. 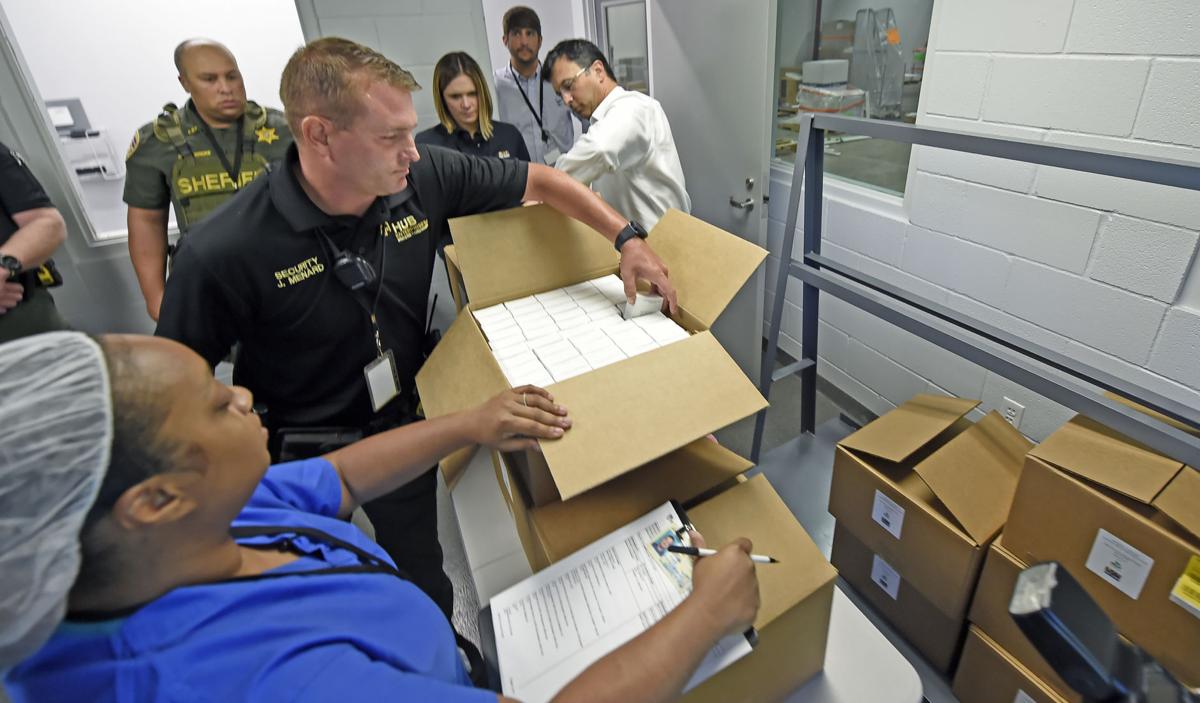 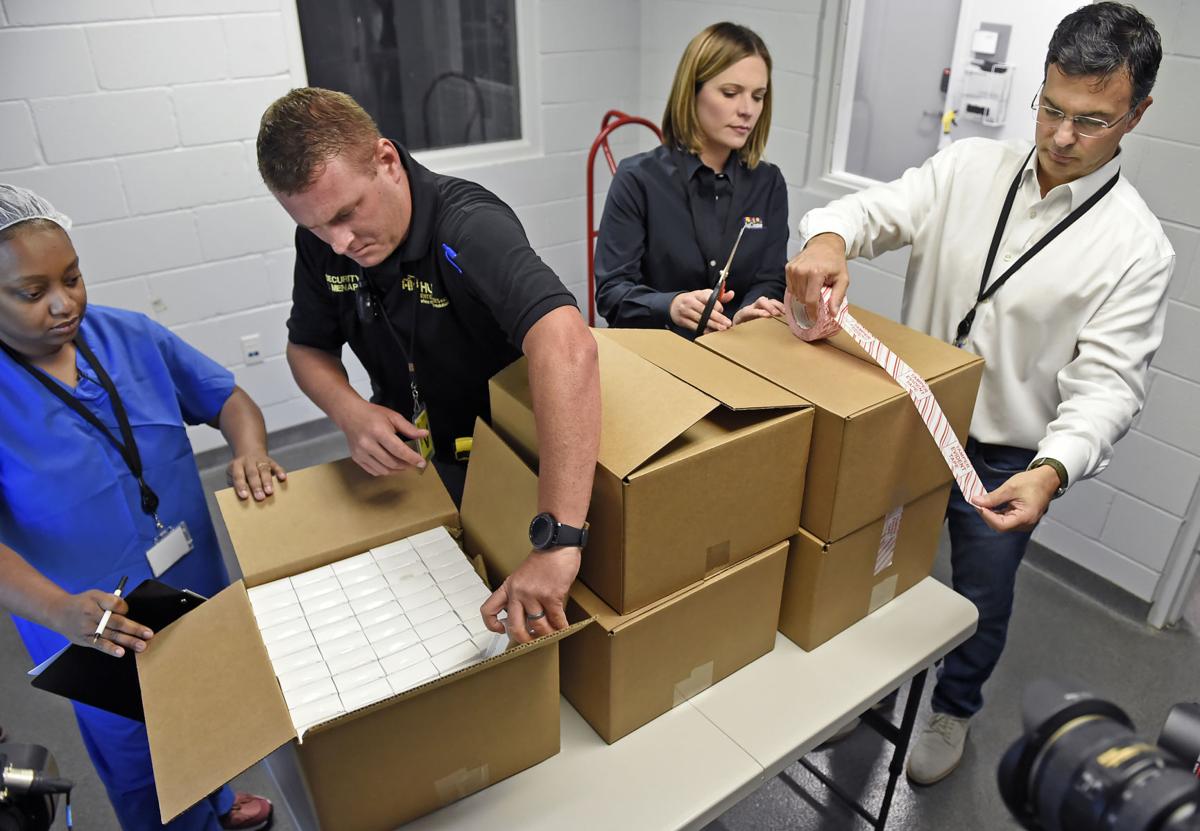 Boxes of medical marijuana are checked, sealed and shipped at the GB Sciences grow facility. After years of delays, medical marijuana will finally reach the pharmacy shelves Tuesday August 6, 2019, in Baton Rouge, La.

Boxes of medical marijuana are brought in to be checked, sealed and shipped at the GB Sciences grow facility. After years of delays, medical marijuana will finally reach the pharmacy shelves Tuesday August 6, 2019, in Baton Rouge, La.

A tech reaches for the tamper evident tape to seal boxes at the GB Sciences grow facility. After years of delays, medical marijuana will finally reach the pharmacy shelves Tuesday August 6, 2019, in Baton Rouge, La.

Boxes of medical marijuana are checked, sealed and shipped at the GB Sciences grow facility. After years of delays, medical marijuana will finally reach the pharmacy shelves Tuesday August 6, 2019, in Baton Rouge, La.

For years, Gary Hess has used marijuana to help abate a litany of mental and physical ailments he carried back from two combat tours in Iraq, including chronic pain, PTSD and traumatic brain injury.

Almost three years ago, he drove to California to obtain the drug, and later sought it out in the illegal market in New Orleans. Hess, now 41, often smoked it in the shed behind his home in Belle Chasse, out of view from his wife. It felt wrong, he said, even though the drug relieved him of some of the mental anguish he brought home from war.

On Tuesday, he walked into a licensed pharmacy in Baton Rouge and bought a bottle of marijuana tincture – legally.

“For the first time in my long struggle, I’ll be able to do this legally in front of my family,” Hess said. “That’s incredible.”

Hess became one of the first patients to receive medical marijuana legally in Louisiana on Tuesday, ending years of waiting for access to the drug since lawmakers here approved it for medical use in 2015.

Alex Domino, a 70-year-old cancer patient who discovered medical marijuana as a potential treatment option when researching on the internet last year, bought the first bottle of tincture from Capitol Wellness Solutions, the only licensed marijuana pharmacy in the Baton Rouge area, on Tuesday morning.

Albert Anthony and his wife Jeanette came to the pharmacy, in the health district off Essen Lane, to buy a bottle for Jeanette, who suffers from brain cancer. Albert said he hopes the drug will ease her symptoms, like a loss of appetite.

“This is truly medicine,” said John Davis, head of GB Sciences Louisiana, the firm hired by LSU to be one of two marijuana growers in the state. “Now people have a safe place to obtain their products.”

When and how can I get it? Answering your questions as medical marijuana hits shelves in Louisiana

The first shipment rolled out of GB Sciences’ facility in south Baton Rouge early Tuesday, and reached Capitol Wellness Solutions later in the morning, to much fanfare.

The northshore region’s medical marijuana pharmacy, Willow Pharmacy in Madisonville, also began selling the products to patients Tuesday. The pharmacy in Lafayette will open Wednesday and New Orleans’ will open next week, according to the owners.

The first patient in line at the Madisonville pharmacy Tuesday was former state Sen. Anthony Guarisco, who sponsored and passed Louisiana’s first bill legalizing medical marijuana in 1978, though the state did not set up a framework for dispensing the drug until 2015.

“It’s one of those moments where you pinch yourself and shake off the residual disbelief,” said David Brown, one of the co-owners of Willow Pharmacy. “The long night is over and our struggling patients can finally sample these powerful and potentially life-altering natural medicines.”

Patients have waited years for the drug to become legally available in Louisiana.

Former Gov. Bobby Jindal in 2015 signed a law that paved the way for the legal growth and dispensing of medical marijuana, making Louisiana the first state in the Deep South to allow for access to the drug.

A year later, Gov. John Bel Edwards signed another bill that set forth the current program, tweaking language to allow doctors to “recommend” the drug to patients, among other things.

But growers faced repeated delays, as GB Sciences clashed with state agriculture regulators, and patients and pharmacy owners became increasingly frustrated in recent months, calling for products to be released. Southern University, the other licensed grower, has still not reached the market, and switched contractors last year after its first pick made virtually no progress.

The shipments made Tuesday, to pharmacies throughout the state, include 4,760 bottles, according to Louisiana Agriculture Commissioner Mike Strain, who spoke about the program while qualifying for reelection. Another 4,300 bottles are set to be cleared Friday, as production begins taking off.

Most states have now legalized medical marijuana. According to the National Conference of State Legislatures, more than 30 states plus the District of Columbia, Guam, Puerto Rico and the U.S. Virgin Islands have enacted medical marijuana laws.

The bottles of 30 milliliters, about one fluid ounce, sold in Louisiana range between $90 and upwards of $200, depending on the formulation and the pharmacy. Medical marijuana is not usually covered by insurance, meaning patients must pay out of pocket.

Davis, of GB Sciences, batted back critics of the pricing, saying comparisons with other states’ products are not accurate because most states allow for raw flower, marijuana that can be smoked. The products being sold in Louisiana are created using a more involved process.

Davis said physicians are inundating him with requests for information, and he has toured the state providing information to the medical community. The products for sale now only include tinctures, in three formulations with varying levels of THC, the compound in marijuana that elicits a high, and CBD, which does not get users high. The tinctures are mixed with coconut oil and are mint flavored.

Advocates successfully lobbied the Louisiana Legislature this year to allow for metered-dose inhalers as a method of ingesting medical marijuana, and that could be on the horizon as the program lifts off. Among the people who testified before the Legislature in favor of that bill was Hess, who described in great detail the traumas he experienced while serving in Iraq in the mid-2000s.

Hess said he came back to the U.S. in 2008 unable to control his emotions, and experienced wild swings between depression, anxiety and insomnia. After reaching out to the U.S. Department of Veterans Affairs, Hess said doctors prescribed him a “cocktail” of medication including Adderall, ambien, Prozac and painkillers.

But a Marine Corps friend introduced him to medical marijuana several years ago, and within months he said he got off the prescription drugs. He opened up to his wife, and continued to seek out the drug for the relief.

Having access to it now, legally, is “surreal,” he said.