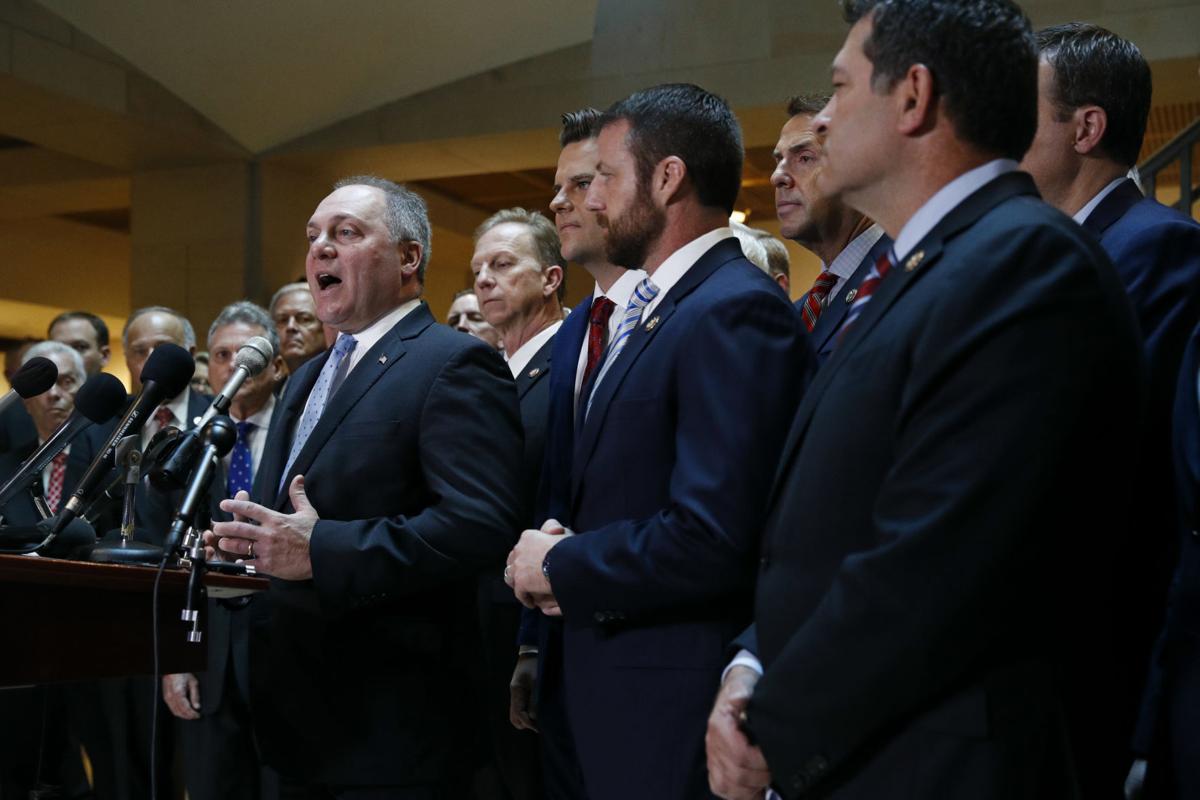 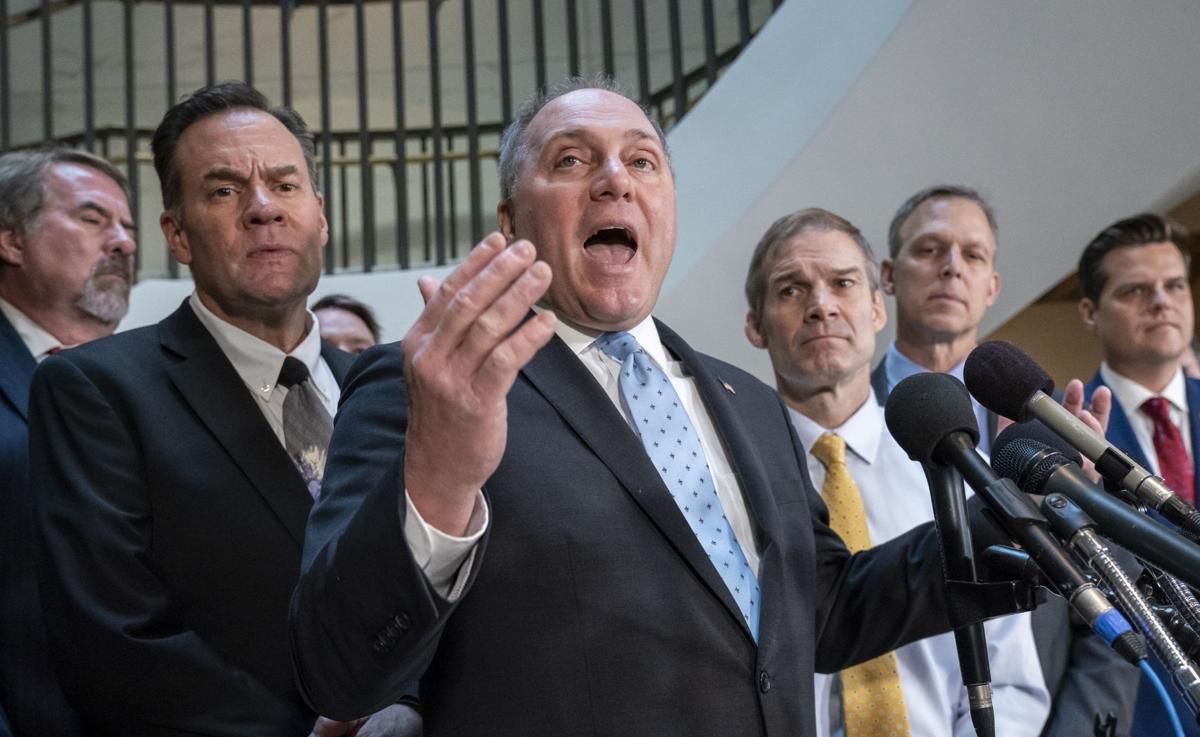 WASHINGTON — From TV soundbites to symbolic demonstrations, Louisiana Republicans have emerged among the chief defenders of President Donald Trump as House Democrats continue their impeachment inquiry into whether he improperly sought help investigating a political rival.

U.S. House Minority Whip Steve Scalise, R-Jefferson, led a group of nearly two-dozen House Republicans in bum-rushing a closed hearing Wednesday and has made the rounds on national and local radio and television programs in the past week.

U.S. Sens. John Kennedy, R-Madisonville, and Bill Cassidy, R-Baton Rouge, were among the 44 senators who immediately signed onto a Senate resolution Thursday condemning the House’s impeachment inquiry of Trump. It's centered on Trump's request that Ukraine investigate former Vice President Joe Biden, who is now seeking the Democratic presidential nomination for 2020.

In the past week, Scalise did two national television appearances and three national radio interviews. Kennedy also has made the television rounds.

Kennedy said he’s been “appalled and perplexed” by how Democratic leaders are conducting the impeachment inquiry into whether Trump asked Ukraine to investigate Biden and his son's dealings in the country.

“Their arrogance is breathtaking,” Kennedy said of House Speaker Nancy Pelosi and Intelligence Committee Chair Adam Schiff, both California Democrats. “Many members of the House, including but not limited to Republican members, are very upset by this unorthodox procedure.”

He called the process far from fair and impartial, likening it to a “firing squad and the evidence be damned.”

Democrats are currently investigating whether Trump used U.S. foreign aid to pressure Ukraine President Volodymyr Zelenskiy into investigating former Vice President Joe Biden and his son, Hunter, and their dealings in Ukraine. Most of the impeachment proceedings have taken place behind closed doors as an investigative and security measure, but there has been a steady stream of leaks to the media about what's taken place in the confined proceedings.

Under House rules, which Republicans have followed in the past, only members of three key impeachment inquiry committees — Oversight and Reform; Intelligence; and Foreign Affairs — are authorized to attend the closed-door hearings, even when testimony isn’t classified.

U.S. Rep. Clay Higgins, R-Port Barre, is the only member of the Louisiana delegation who is on one of the committees and has been taking part in the hearings. There are about four dozen other Republicans on the committees who have access to the information. That's about a quarter of the House GOP caucus.

WASHINGTON — As the U.S. House pursues impeachment charges against President Donald Trump in the coming months, Louisiana is positioned to pla…

Trump won 58% of the vote in 2016 and received more votes than any candidate in Louisiana history. He rallied earlier this month rallied for GOP candidates for governor and is expected to return to Louisiana to rally against Gov. John Bel Edwards' re-election ahead of the Nov. 16 runoff. Trump's Louisiana rallies draw thousands of supportive fans.

“Their voters like him,” Henderson said of the GOP congressional delegation's vociferous support of Trump. “The majority of voters in those districts will want to support a Republican supporting President Trump.”

Nationally, polls have shown that impeachment news that has come out has done little to turn Republican voters against Trump and has largely only affected Democrats or independents.

“If that’s who’s responding in a negative way, those aren’t the voters that Scalise and those folks have to face,” Henderson said.

U.S. Rep. Cedric Richmond, the lone Democrat among Louisiana’s delegation, has repeatedly voted in favor of impeaching Trump since the president took office in 2017.

The process has emerged as the GOP's latest argument against impeachment proceedings.

In three past impeachment proceedings — the only others in the nation's history — the House has held a vote to begin an inquiry, though that is not constitutionally mandated or required under the chamber’s rules.

Kennedy had lunch at the White House with Trump on Thursday. He said they talked a little about the impeachment inquiry, though the meeting’s focus was mostly on other issues.

“I don’t see the president really sweating this,” Kennedy said. “He doesn’t seem to be especially worried about it.”

He described the president’s mood over the impeachment inquiry as “combative” but not unusually so.

“President Trump is not a turn-the-other-cheek kind of guy,” Kennedy said. “If you bite him, he’s gonna bite back.”

Scalise, who is the No. 2 Republican in the Democrat-led House, was the highest ranking member who joined Republicans in grinding the impeachment inquiry to a temporary halt on Wednesday when about two dozen GOP House members stormed into a closed-door deposition with a Defense Department official.

The panel had not yet started its deposition of Deputy Assistant Secretary of Defense Laura Cooper, who specializes in Ukraine policy, when the Republicans entered. Schiff ushered her out of the room as Republicans barged inside.

“What are they trying to hide from the American people that they won't allow voting members of Congress to hear what's going on in that room?” Scalise said. "We're going to represent the voices of the millions of Americans that our districts represent.”

Trump’s GOP defenders vacated their committee hearing protest less than 30 minutes after Trump, who was in Pennsylvania as the U.S. Capitol event unfolded, sent a series of supportive tweets about them.

“I think what you saw was frustration," Kennedy said of Scalise and other Republicans' charging into a closed hearing in a secured area of the Capitol.

Henderson, the LSU professor, said the GOP’s storming of the impeachment hearing was also not surprising.

“It’s unusual, but so much of our national politics today are,” he said. “The folks leading it were doing the kind of thing their constituents like.”

“We’ve been seeing these kinds of things as the country’s become more divided and polarized,” he said.

Democrats blasted the GOP action. They argued it could have threatened national security, as some members had their phones in the "Sensitive Compartmented Information Facility" — a secure room where members can hear classified information and where electronics are not allowed. Democrats said that could taint the ongoing investigation into claims that Trump withheld aid from Ukraine in exchange for a political favor.

U.S. Rep. Ralph Abraham, an Alto Republican who just recently lost his bid for Louisiana governor, briefly entered the room with the group but didn’t stay.

He and other members of the House Armed Services Committee argued that they should be privy to details from the Defense Department official.

“I believe this charade is unconstitutional, politically-motivated, and conducting it in secret behind locked doors goes against everything we’re supposed to stand for,” Abraham said.

He and U.S. Rep. Mike Johnson, R-Benton, have separately sent letters to Schiff formally requesting access to Intelligence Committee records. Johnson, who is the ranking Republican on the House Judiciary Committee, said he wants access to evidence before impeachment process makes its way to Judiciary.

“There’s no respect or recognition for the rights of the duly elected members of the House — even those of us on committees of jurisdiction,” Johnson said.

He called the process to date a “sham.”

Even former Gov. Bobby Jindal, who unsuccessfully sought the GOP 2016 presidential nomination and railed against Trump during the process, has weighed in.

“If Dems are so determined to have an impeachment vote by the end of 2019, why don't we just take a vote so they can all get back to work,” he tweeted this week.

Meanwhile, several members have turned to voicing frustration over the system being bogged down by the impeachment proceedings.

“If we’re consumed with impeachment, then nothing more will happen,” Cassidy said bluntly.

Congress has fewer than two dozen working days left in the year, with an almost mindbogglingly daunting to-do list. The federal government is only funded through Nov. 21 — the same day the National Flood Insurance Program is set to expire.

The United States-Mexico-Canada Agreement hasn’t been ratified by Congress a year after Trump hashed out the trade deal, and members from both chambers and both political parties have identified several health care issues, including high prescription drug prices and surprise medical bills, among problems they want to tackle by the end of the year.

Though he signed onto the symbolic Senate resolution condemning the House Democrats’ handling of the inquiry, Cassidy said he’s tried to avoid the day-to-day drama surrounding the ordeal.

“I’m going to be a juror, so I’m kind of refraining from commenting on facts and circumstances,” he said. “I’ve not followed the president’s reaction.”

Cassidy said he’d rather spend his time in Washington focusing on health care, flood insurance and other proprieties.

“Everything I’ve listed has the ability to make things better for some facet of American life,” he said. “That’s what I came here to accomplish.”

He predicted that if the House votes to impeach Trump, then the Senate trial, which is likely to end in acquittal in the GOP-controlled chamber, could last up to eight weeks.

“The time is totally consumed by impeachment,” Cassidy said.

WASHINGTON — U.S. House Minority Whip Steve Scalise was among GOP lawmakers who joined President Donald Trump for Game 5 of the World Series i…