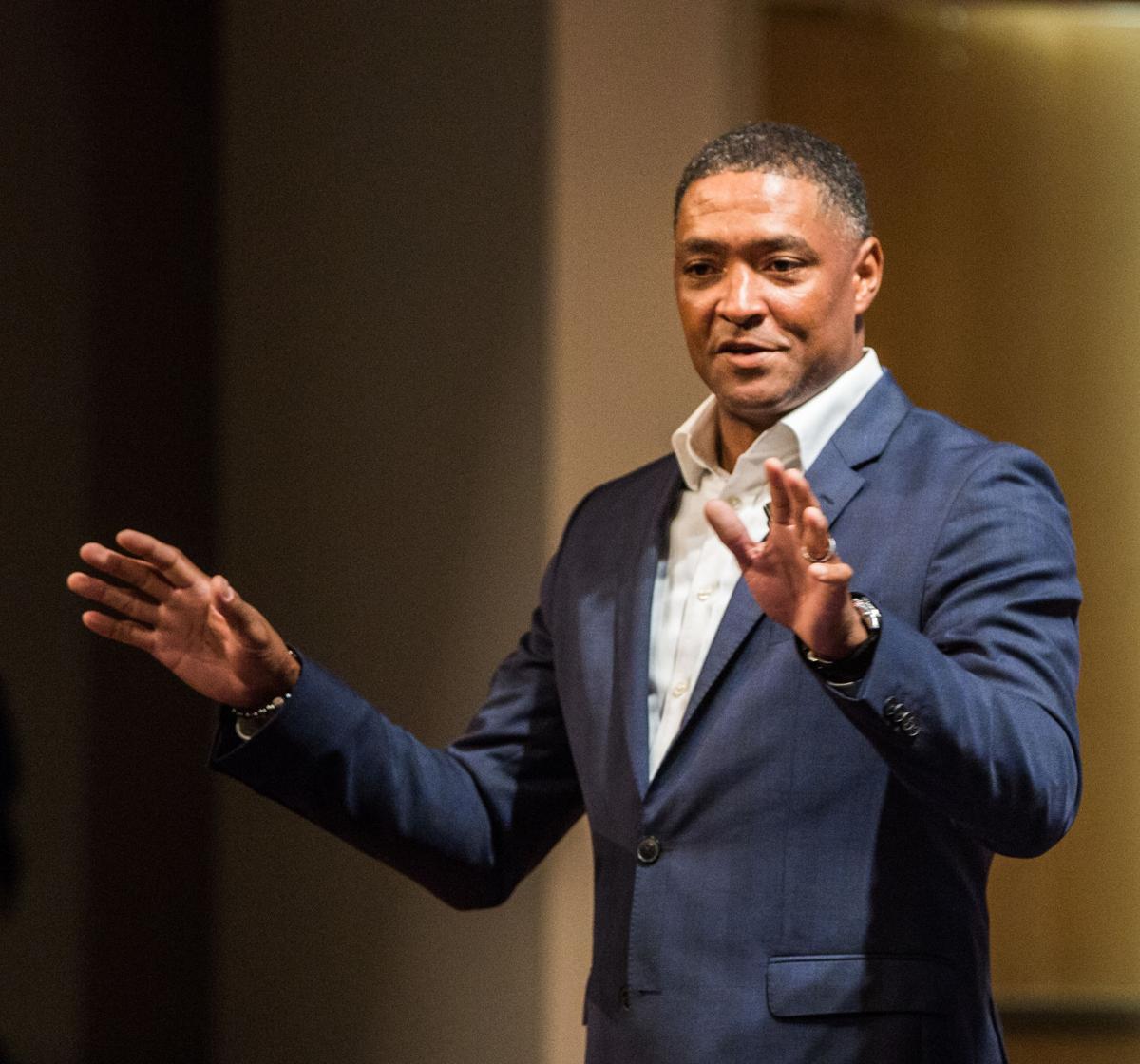 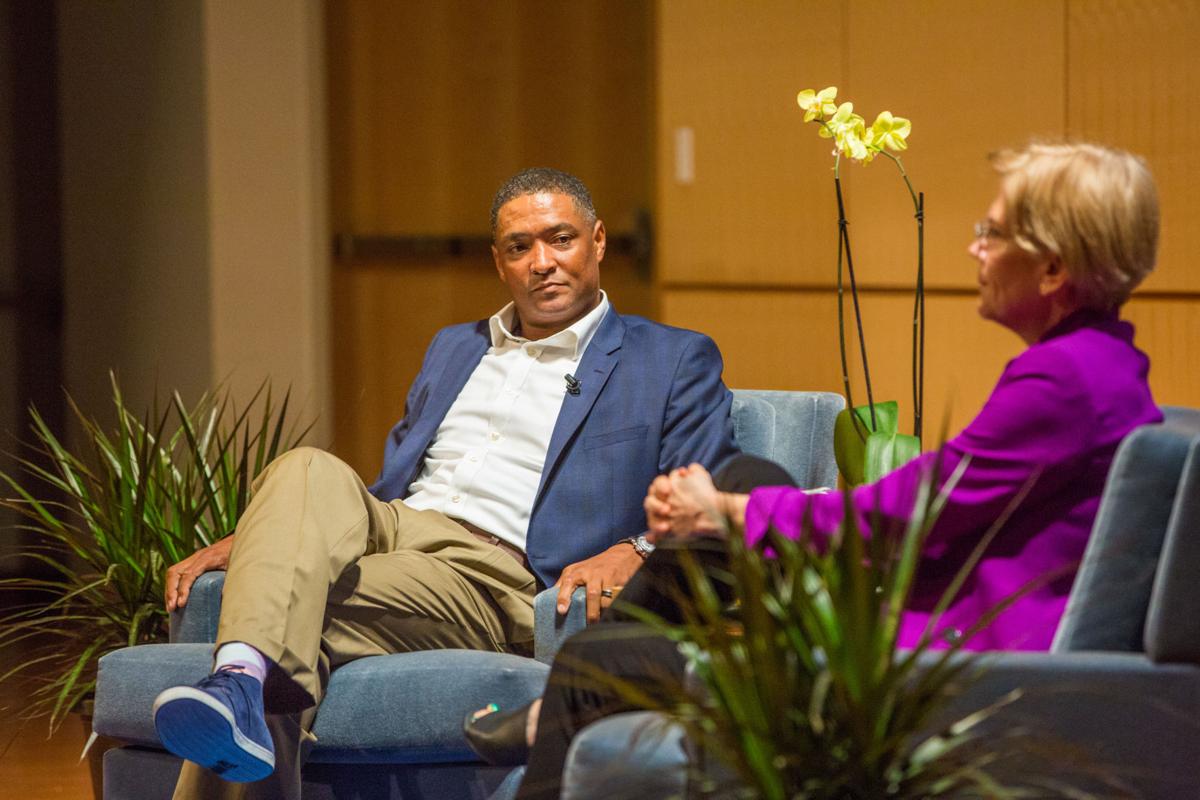 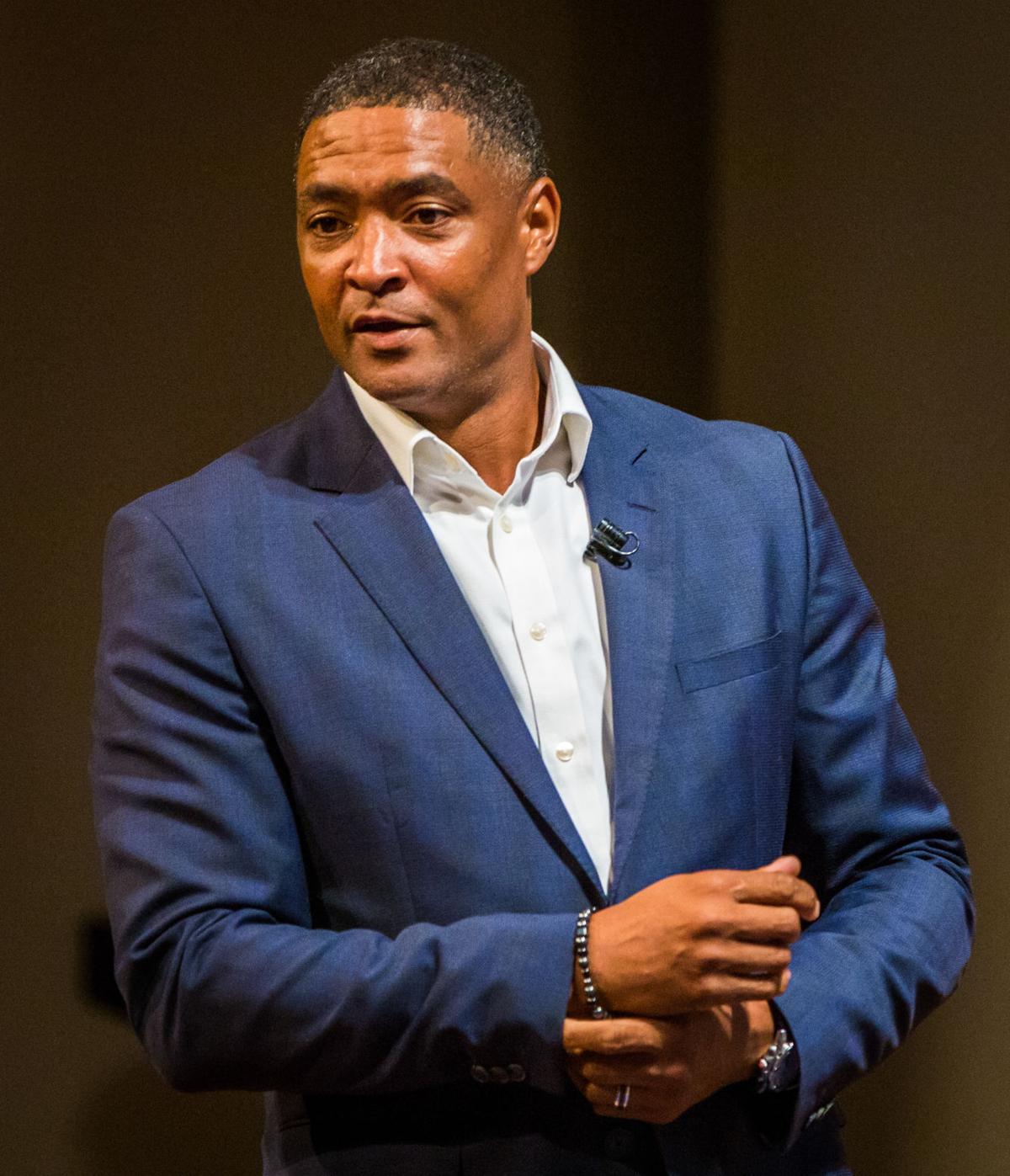 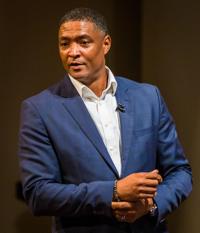 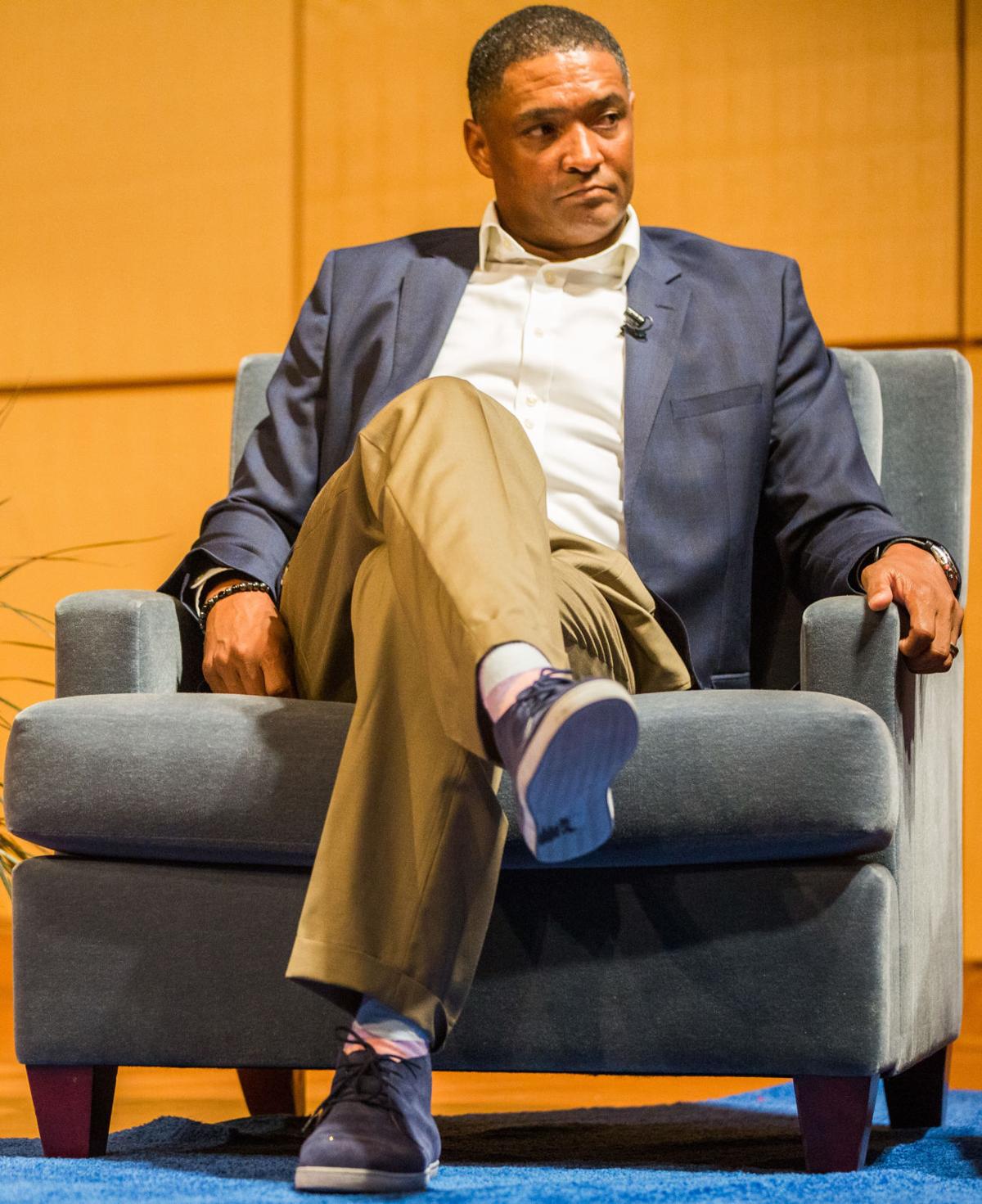 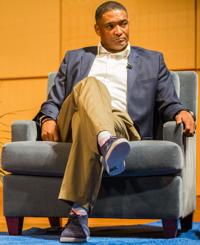 WASHINGTON — Over the last 18 months, U.S. Rep. Cedric Richmond has repeatedly waded into the center of some of the hottest partisan political controversies, firing criticism at President Donald Trump’s White House as the chairman and leading spokesman for the Congressional Black Caucus.

Richmond’s tenure as chairman of the Congressional Black Caucus, which concludes at the end of this year, has been particularly high-profile. The 49-member group of black lawmakers elected Richmond as their leader in late November 2016, just as the country’s first black president, Barack Obama, was preparing to leave office.

Trump’s penchant for personal insults — many of which his critics say stoke racial tensions and pander to racists — have presented Richmond with plenty of opportunities to weigh in with a response.

The skirmishes and leadership role have raised Richmond’s national profile and made him a rising star in the Democratic Party — just as Democrats gear up to challenge Republican control of the U.S. House of Representatives in this November’s midterm elections. The 44-year-old New Orleans congressman's name has been mentioned repeatedly as a contender for a potential leadership post, especially if an aging generation of Democratic leaders steps aside.

“I knew that the Trump time would be a very different time,” Richmond, whose district includes most of New Orleans and large parts of Baton Rouge, told The Advocate in a lengthy July interview in his Capitol Hill office. “This administration — whether you’re a critic or supporter — you have to admit is an unconventional administration.”

The political turnaround has brought the kinds of policy reversals typical of a change in administration. Richmond said programs he and other black Democrats have fought for in Congress — such as welfare and social safety net programs like food stamps and the police reform efforts pushed by Obama’s Justice Department — have been scaled back or reversed under the new administration.

But Richmond also blamed Trump’s bombastic rhetoric and politics with creating “a hostile time for African Americans” in the United States.

“It all comes from the top. The president may not want to take credit for it, but he deserves the credit,” Richmond said. “You can go back to his rallies where he advocated violence against people protesting. He talked about police officers — when you arrest somebody, rough them up a little bit as you put them in the police car. He’s created this atmosphere.”

Richmond said navigating how to respond to Trump’s rhetoric has presented occasional challenges for the CBC. Richmond described Trump as “a name-calling bully” but said he’s generally sought to avoid petty name-calling with the president.

The Congressional Black Caucus has long prided itself on being the "conscience of the Congress" — a phrase Richmond and other members regularly invoke — and the lawmaker suggested he's sought to avoid petty mud-slinging.

As an example, Richmond pointed to the CBC’s handling of Trump’s first State of the Union address in January. Two weeks earlier, Trump reportedly referred to several African nations as “s***hole countries” while discussing his preference for immigrants from countries “like Norway.”

Rumors flew around the U.S. Capitol that black lawmakers might stage a walkout mid-speech to protest the president. Instead, Richmond led the group in wearing ties and sashes made from West African kente cloth into the House chamber and sat quietly through the address, refusing to clap as Trump touted low black unemployment numbers.

Richmond said some CBC members had pushed for a walk-out but the group decided against it out of respect for the presidential office — and because they didn’t want to allow criticism of their protest to distract from their critique of the president.

“You don’t want the conversation to revolve around the tactic, you want the conversation to revolve around the issues,” Richmond said. “Just like Trump was able to do with the football players (kneeling in protest during the National Anthem), he criticized the tactic — and now everybody talks about standing versus kneeling and patriotism and not criminal justice reform and police misconduct and police reform.”

Still, Richmond dished out some jabs of his own at the president in the hour-long interview and said it’s occasionally necessary “to meet a guy where he is.” Richmond, for example, said he’d like to call the president’s bluff on claims that the 79-year-old Waters is “low I.Q.”

“I’d put up money her I.Q.is higher than his. We don’t worry about it,” Richmond said. “There are so many things we’re focused on. His name-calling is just not one of them.”

That’s meant that the CBC — which for years sought to highlight issues important to black Americans and inject them into the political discourse — has now been thrust into the fray with the expectation of responding to the president on behalf of its constituents, Brox said.

Richmond “is at the forefront for people looking for a reaction,” Brox said.

The CBC’s relationship with Trump has been rocky almost from the start. Richmond helped pen a report titled “We Have a Lot to Lose: Solutions to Advance Black Families in the 21st Century,” a riff on a repeated campaign line from Trump, who’d ask black voters “what do you have to lose?” after painting a bleak picture of inner-city black life.

Trump never responded to the report, Richmond said. But he did hold a White House meeting with Richmond and other CBC leaders in February. That summit came after Trump asked April Ryan, a black reporter with the American Urban Radio Networks, during a press conference if she could arrange a meeting.

“Are they friends of yours?” Trump asked.

The meeting initially appeared to go well but relations between the CBC and Trump soured soon after. Richmond declined a White House invitation for a follow-up meeting later that year.

“It’s because of his track record,” Richmond added, pointing to a number of incidents throughout Trump’s career, including his bombastic demand for the death penalty for five teenagers (the “Central Park Five”) accused in a 1989 New York City rape and assault. They later were exonerated and Trump has yet to apologize.

Former Vice President Joe Biden made a point of spending time with Richmond during a swing through New Orleans. When progressive firebrand and Massachusetts Sen. Elizabeth Warren visited the city earlier this month for the “Netroots Nation” convention, she tapped Richmond to moderate her event at Dillard University.

Richmond himself declined to speak about any leadership aspirations, insisting he’s focused solely on helping his party win seats in the upcoming election.

The American people "don’t care about who’s going to lead the Democrats or who’s going to lead the Republicans. We should be talking about what we’ll do if we take the House back,” Richmond said. “I think it’s counterproductive because American people think we’re more concerned about who our leaders are going to be than how to keep food on their table, increase their savings accounts and all of those other things.”

“We’ve done an awful job as Democrats of talking to people about what we’re really trying to do,” Richmond said. “I think that’s most of my role, reminding people what we’re fighting for.”

A number of Democratic lawmakers, strategists and lobbyists, however, see Richmond as a potentially formidable figure from the ranks in a younger generation of party leaders. House Minority Leader Nancy Pelosi, Assistant Minority Leader Jim Clyburn and Minority Whip Steny Hoyer are all over the age of 75. Pelosi in particular has faced a small but growing faction of rank-file-members calling on her to step aside.

National political reporters have included Richmond’s name as a potential candidate for the top Democratic leadership ranks should the party take control of the House of Representatives this fall, as some election forecasters now expect. Politico, an inside-the-beltway news outlet that tracks leadership jockeying closely, even mentioned Richmond as a long-shot candidate for the speakership should Pelosi falter.

“I think he’s in a prime position for a leadership job if Democrats retake the majority,” said National Urban League President Marc Morial. “He’s the next generation of leadership, which I think Democrats sorely need. He’s very popular and likeable. I think he’s good in front of the mic and a strong and credible spokesperson for the issues that he’s championing.”

Morial, who served as mayor of New Orleans from 1994 to 2002, said Richmond’s growing clout and stature in Congress — combined with the rise of fellow New Orleans-area lawmaker and House Majority Whip Steve Scalise, R-Jefferson — suggested a resurgence in Louisiana influence in Congress.

“Having a Cedric Richmond in a leadership position, if Democrats are in control, is in the best interest in the state,” Morial said. “I think it’s important.”

Even outside the leadership ranks, Richmond might enjoy increased sway in a Democrat-controlled House. He’s Louisiana’s lone Democrat in Congress and one of just a small handful of House Democrats whose districts touch the Gulf of Mexico, potentially making him a key voice on regional issues. Richmond has developed a reputation as a prominent Democratic authority on flood insurance, for example.

“Cedric is a keeper for the Democrats,” said Livingston, who now works as a lobbyist after spending 22 years representing Jefferson Parish as a conservative Republican in Congress. “He’s very impressive and I like him. I’ve heard from others that Cedric has potential on the Democratic side. That’s cool, that’s good for New Orleans.”

Louisiana Rep. Cedric Richmond is the latest to respond to comments made by President Donald Trump Thursday afternoon during an Oval Office me…