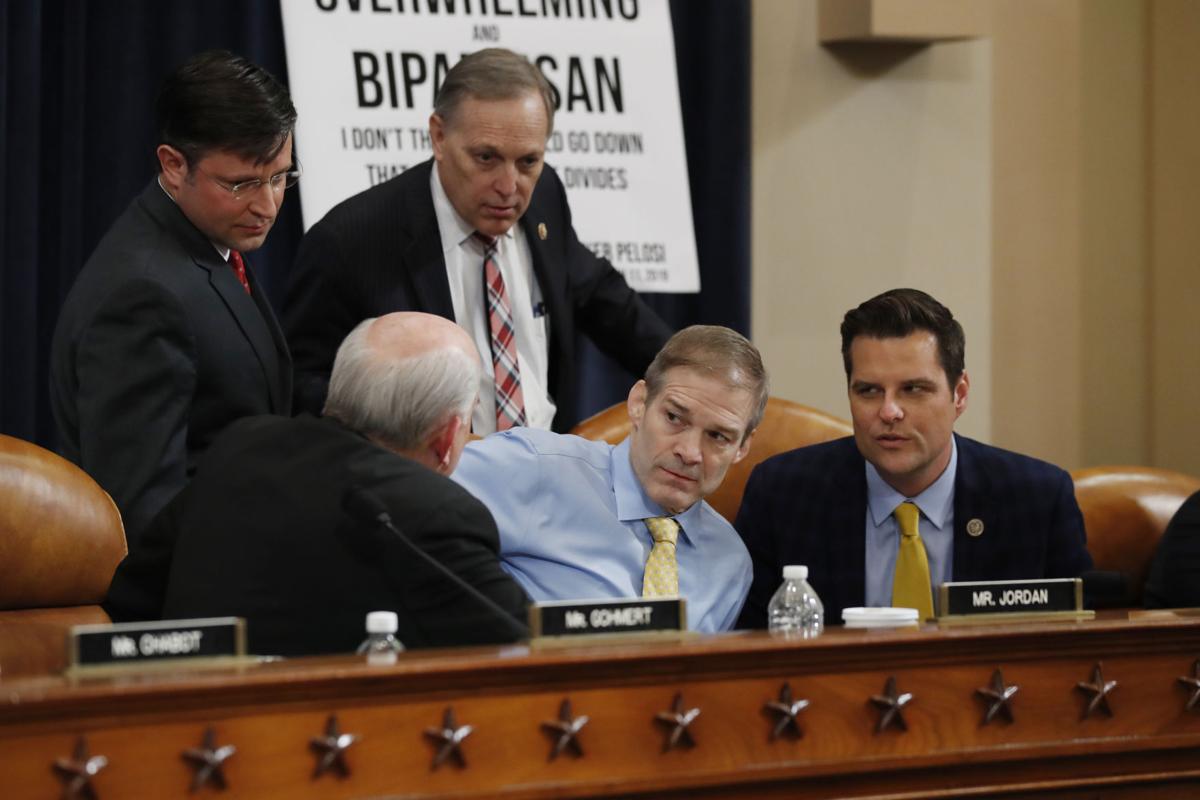 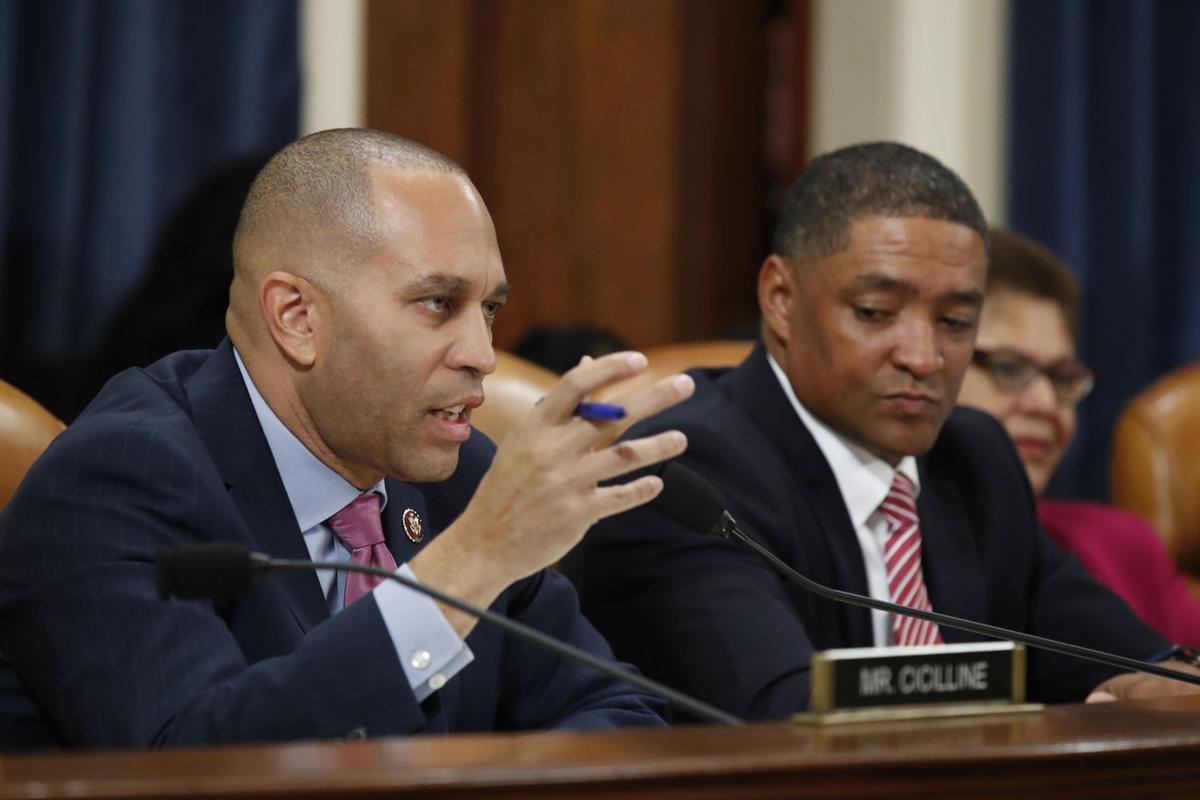 Rep. Hakeem Jeffries, D-N.Y., left, beside Rep. Cedric Richmond, D-La., talks during a hearing before the House Judiciary Committee on the constitutional grounds for the impeachment of President Donald Trump, on Capitol Hill in Washington, Wednesday, Dec. 4, 2019.

Rep. Hakeem Jeffries, D-N.Y., left, beside Rep. Cedric Richmond, D-La., talks during a hearing before the House Judiciary Committee on the constitutional grounds for the impeachment of President Donald Trump, on Capitol Hill in Washington, Wednesday, Dec. 4, 2019.

Johnson, a Republican from Benton, sought to portray the hearing with legal scholars as a sham in an impeachment process that threatens Democracy.

Richmond, a Democrat from New Orleans, argued the case has been made that President Donald Trump abused his official power by leveraging foreign aid to Ukraine for political purposes.

Both stuck to themes their party colleagues carried over the course of the day, as members of the panel set out to make their case during the panel's first official meeting on the Ukraine-focused impeachment effort.

“Let’s not pretend that anyone cares about anything that’s being said here today," Johnson said.

Louisiana Congressmen Richmond, Johnson will have roles in next phase of Trump's impeachment

WASHINGTON — Two Louisiana congressmen will have front-row seats as the House impeachment inquiry of President Donald Trump enters its next phase.

Johnson, sitting in front of three large placards that Republicans placed in the hearing to cast doubt on the hearing, tweeted or retweeted more than four dozen times during it. Richmond also was frequently looking down during the meeting. He retweeted the House Judiciary Democrats once.

The House Intelligence Committee, in a party-line vote Tuesday evening, adopted a 300-page report detailing witness testimony and the claims that Trump threatened to withhold aid from the Eastern European country if it didn't investigate former Vice President Joe Biden and his son, Hunter. Biden is now a candidate for president in 2020, and Trump is seeking re-election.

The Judiciary Committee, heard from four legal scholars about the impeachment process and their views on the threshold for impeaching a president. Three of the law professors, all invited by Democrats, argued that Trump should be impeached. The one invited by Republicans said it hasn't been proven that Trump committed an impeachable offense.

WASHINGTON — The first public hearing in an historic impeachment inquiry doesn't appear to have budged the views of Louisiana Republicans, who…

Richmond, who played clips from the Intelligence Committee’s witness testimony, said he thought the Judiciary hearing was effective.

“We’ve heard today that a president abuses he power when he uses his power for his own personal interest, rather than the interest of our country,” said Richmond, co-chair of Biden's presidential campaign.

Johnson, who has practiced constitutional law for 20 years and is a Trump ally, said the whole process is a “Pandora’s box” that would set a bad precedent.

“This type of hyper-partisan impeachment is one of the most destructive and divisive things we could possibly do to our nation,” he said.

Beyond Richmond and Johnson's presence on the influential Judiciary panel, the historic hearing was sprinkled with several Louisiana flourishes.

The Republican legal expert has deep connections to Louisiana. George Washington University law professor Jonathan Turley is a former Tulane law professor. Turley also represented New Orleans Judge Thomas Porteous during his impeachment trial in 2010. Porteous was convicted and removed from office. In his written testimony, Turley also had planned to cite that charges were vacated against former Louisiana Congressman William Jefferson, though he trimmed it from his spoken remarks.

Both Republicans and Democrats used Louisiana examples to try to make their cases.

Stanford law professor Pamela S. Karlan, one of the Democrats' witnesses, sought to draw a parallel between the Ukrainian security aid and federal disaster aid for Louisiana after a hurricane hits.

"What would you think if, when your governor asked the federal government for the disaster assistance that Congress has provided, the president responded, 'I would like you to do us a favor. I’ll meet with you and send the disaster relief once you brand my opponent a criminal.'?" she posed. "Wouldn’t you know in your gut that such a president had abused his office, betrayed the national interest, and tried to corrupt the electoral process?”

U.S. Rep. Ken Buck, R-Colorado, worked in a mention of Louisiana's most storied governors and questioned if it was an abuse of power for then-President Franklin D. Roosevelt to have the IRS investigate his political rival, Huey P. Long. Roosevelt was not impeached. Buck cited that as an example of different thresholds for judging the behavior of Democrats and Republicans.

Judiciary Chair Jerry Nadler, D-New York, said the Judiciary Committee could have another meeting in a few days — giving Johnson and Richmond another chance for a front-row seat in the process. No meeting has been scheduled.

Republican U.S. Rep. Mike Johnson, of Benton, exposed Democrats for what he described as a fraudulent impeachment process during a nationally …