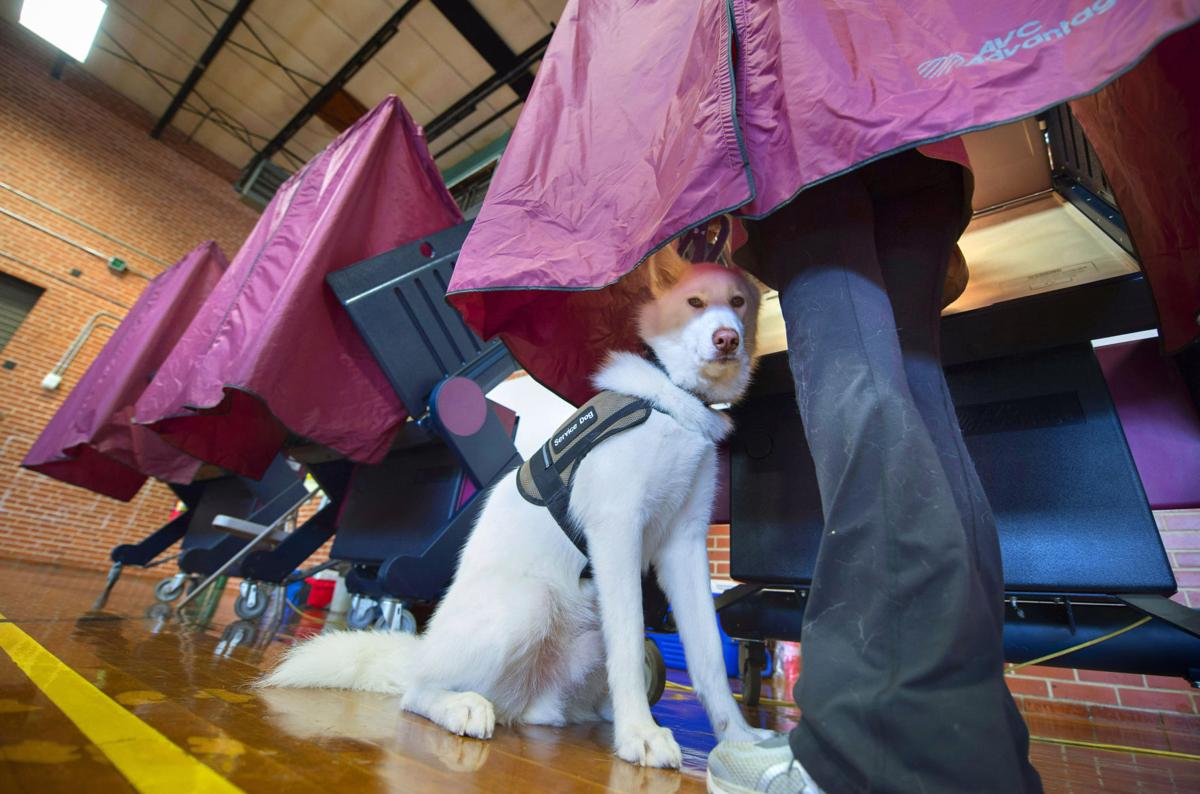 Rex, a 4 1/2-year-old service dog in training, peers out from the voting booth as owner Laura L'Herisson casts her ballot on Tuesday, Nov. 6, 2018 on election day in Baton Rouge. L'Herisson voted at Glasgow Middle School. 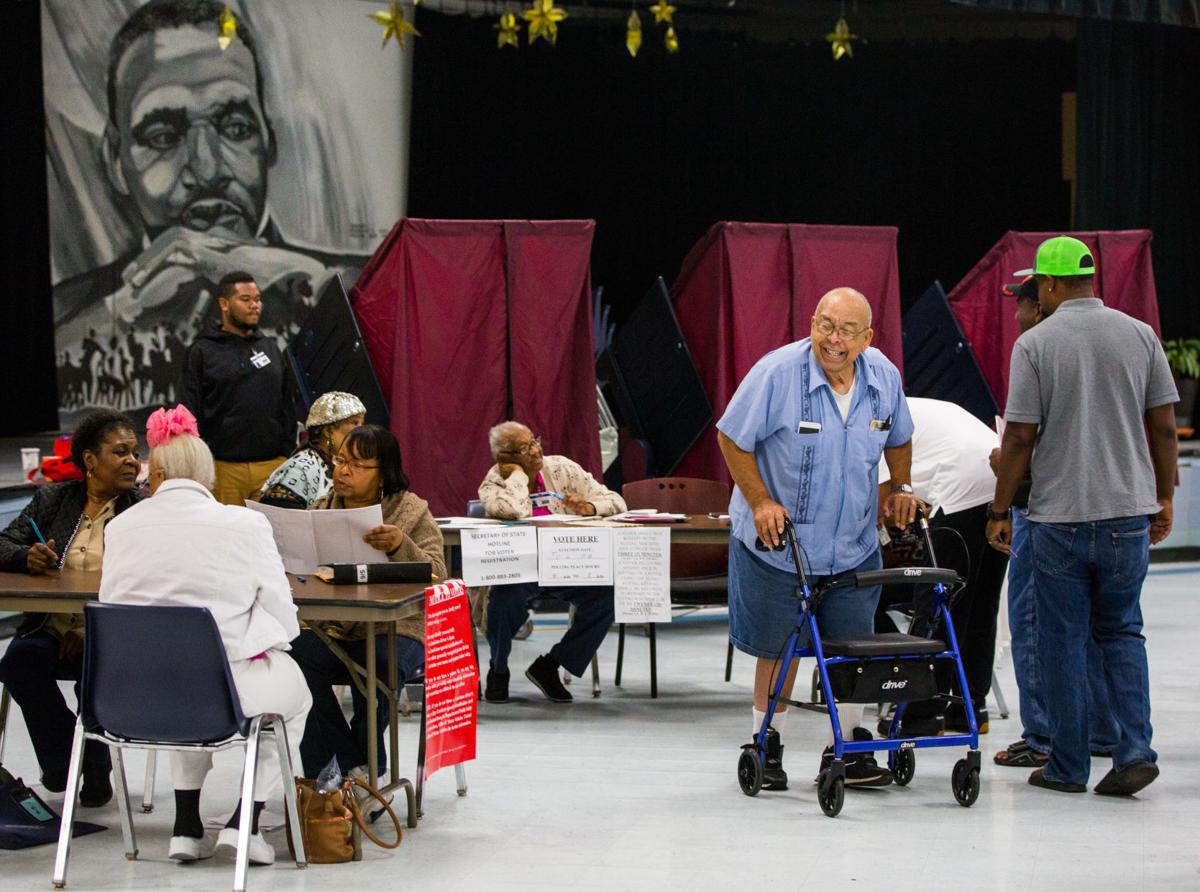 Rex, a 4 1/2-year-old service dog in training, peers out from the voting booth as owner Laura L'Herisson casts her ballot on Tuesday, Nov. 6, 2018 on election day in Baton Rouge. L'Herisson voted at Glasgow Middle School.

Here's an election issue that Republicans and Democrats may be moving toward agreement on: eliminating Louisiana's odd "jungle primary" system of electing state, local and congressional candidates and moving toward the more common closed primary system, where candidates of each major party compete in separate fields.

In a blistering column recently published by the conservative website The Hayride, Louisiana Republican Party Chairman Louis Gurvich lamented the crowded field in the recent secretary of state primary that might have put two Democrats in the runoff.

"Until that hallowed day when the return to closed primaries finally dawns in Louisiana, we as a party must also insist that potential Republican candidates carefully assess their chances of winning before declaring for any race," Gurvich wrote.

"The LAGOP must discourage the thrill-seekers, the resumé-builders, the delusional long-shot gamblers, and even otherwise legitimate candidates lacking the financial resources and ability to successfully compete for the intended office."

Meanwhile, Stephen Handwerk, executive director of the Louisiana Democratic Party, told The Advocate the state party hasn't taken a formal position on the idea yet but has supported measures in the past to move federal races to a party primary system.

"We have a sizable group looking at this now, and the party will likely take up the topic at an upcoming meeting of our full (state central committee)," he said.

Under the current "jungle" primary system, Louisiana races are decided by putting all candidates — regardless of party — onto one ballot. If no one gets more than 50 percent of the vote, then the top two vote-getters — again, regardless of party — face each other in a runoff a month later.

That means elections can be decided in head-to-head matchups between two Republicans or two Democrats.

With a shift of as few as 70,000 votes, the upcoming runoff in the secretary of state's race could have been between two Democrats. It would have taken nearly twice as many votes to boost the next Republican candidate to create an all-GOP runoff, even though the state is heavily Republican.

A change to primaries that pit Republicans against each other for one nomination and Democrats against each other for an opposing nomination would require legislative action. The Legislature's next session begins in April, so it's unlikely that any change could happen before next year's statewide elections for governor, lieutenant governor and other offices, as well as elections to the state House and Senate.

Brian Brox, a political science professor at Tulane University, said the jungle primary system is often favored by parties that enjoy dominance in their landscape.

Jeremy Mhire, director of Louisiana Tech's Waggonner Center for Civic Engagement and Public Policy and a visiting professor at Columbia University this semester, noted that the state moved to the jungle primary system in the 1970s when Democrats held most statewide offices. David Treen became the first Republican elected governor since Reconstruction in 1979.

The shift to the jungle system, which has been tweaked over the years, was initiated by then-Gov. Edwin Edwards as a way to fend off Democratic challengers, Mhire said.

"The idea was to move into the open primary (so), in a sense, it's harder to get behind an opposition Democrat," Mhire said. "When you move to an open system, it's sort of a fee-for-all."

But as Gurvich noted in his column, the free-for-all has exploded in recent years.

The 2016 race to fill Louisiana's open U.S. Senate seat had 24 candidates on the primary ballot, including a statewide official and two sitting congressmen. This month's secretary of state race had nine candidates.

Louisiana briefly instituted closed primaries during the 2008 and 2010 congressional cycles, but lawmakers quickly moved back to the old system.

Publicly, the debate over the shift back focused on the jungle primary potentially saving the state money. The Legislative Fiscal Office estimated at the time the state could save millions because the open primary guarantees two elections maximum to decide a race, whereas a closed primary system could prompt a third in some cases if a primary runoff were necessary before the general election.

Among other issues it had created was that many traditional Republican voters were blocked out of the primary because they remained registered as Democrats, Mhire said.

According to the most recent voter statistics available from the Secretary of State's office, fewer than 1 million of Louisiana's nearly 3 million registered voters are registered as Republicans, while nearly 1.3 million are registered Democrats. Another 789,000 are registered to other parties or no party. Yet all of Louisiana's statewide elected officials are Republicans, except Gov. John Bel Edwards, who as a Democrat ran an anti-abortion rights and pro-gun campaign for an unexpected victory over Republican David Vitter, then a U.S. senator with an embarrassing scandal in his past. Republicans also control both the state House and Senate and hold five of the state's six seats in the U.S. House.

Brox said there are many other factors that could come into consideration as the debate over a possible shift heats up.

Louisiana's newest members of Congress often enter the U.S. Capitol at the bottom of the totem poll in the likely event that their seat is won in a December runoff, after other state's races are decided in November.

Because of the chance that a race could be final if a candidate secures more than 50 percent of the vote, Louisiana is barred from holding its primary before the federal November Election Day. In states that operate under a closed system, primaries are held earlier in the year so members elected in November have equal seniority.

"That would be an upside to this type of switch," Brox said of the seniority angle.

Brox said there is also a potential for increased voter engagement.

"December runoffs are just tough," he said, noting holidays, school schedules and travel. "It's a tough time to be politically engaged."

"I think it's a real question which would be better," he said.

"Louisiana's always prided itself on being unique," he said. "Increasingly, politics across the country is moving away from local."

Gov. John Bel Edwards 'in all likelihood' would oppose attempt to move away from 'jungle primary'

Gov. John Bel Edwards says "in all likelihood" he would oppose any attempt to shift Louisiana from its unique "jungle primary" system to a clo…