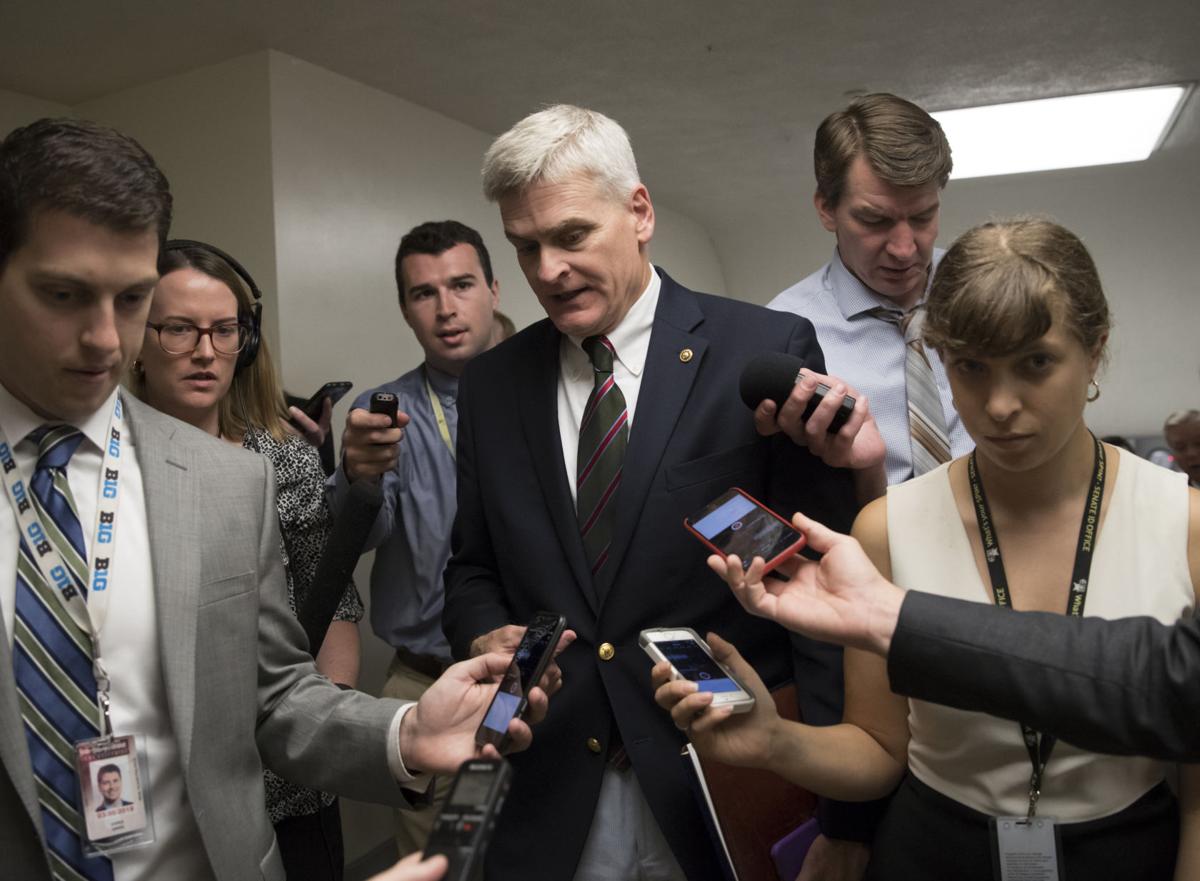 Sen. Bill Cassidy, R-La., heads to the Senate on Capitol Hill in Washington, Thursday, July 13, 2017, for a meeting on the revised Republican health care bill which has been under attack from within the party. Cassidy has expressed opposition to the bill as current written. (AP Photo/J. Scott Applewhite) ORG XMIT: DCSA114 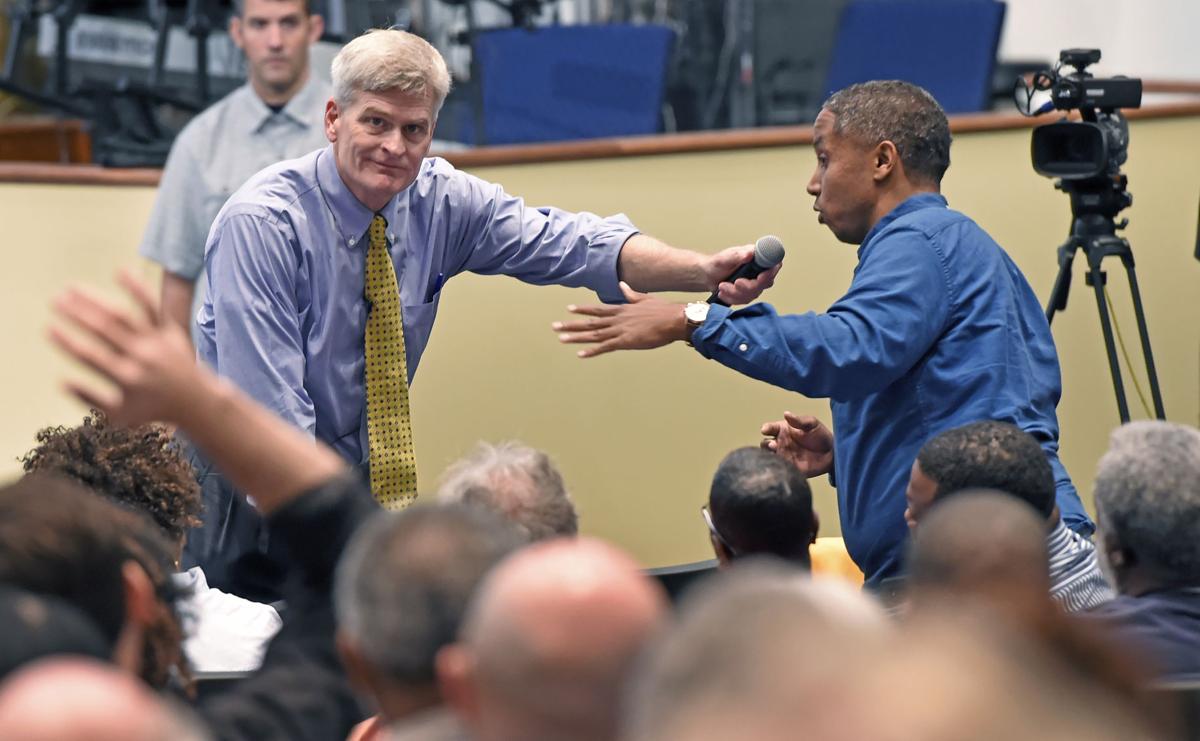 Sen. Bill Cassidy, R-La., heads to the Senate on Capitol Hill in Washington, Thursday, July 13, 2017, for a meeting on the revised Republican health care bill which has been under attack from within the party. Cassidy has expressed opposition to the bill as current written. (AP Photo/J. Scott Applewhite) ORG XMIT: DCSA114

U.S. Sen. Bill Cassidy says a sweeping proposal to overhaul health care he's co-sponsoring with two Republican colleagues is "about the only game left in town" to repeal and replace the Affordable Care Act.

Cassidy, a physician and Louisiana Republican, said he hopes to push forward the plan — which he's working on with South Carolina Sen. Lindsey Graham and Nevada Sen. Dean Heller — by the end of September.

The Cassidy-Graham-Heller legislation, which hasn't yet been scored by the nonpartisan Congressional Budget Office, would scrap the ACA's individual and employer mandates to buy health insurance while largely block-granting Medicaid funding for states.

Speaking at the Baton Rouge Press Club on Monday, Cassidy called Medicaid "a black hole" for government spending — at both the state and federal levels — and blamed the health care program for rising tuition at public universities, infrastructure spending and other needs because Medicaid costs crowd out other priorities.

Medicaid's impact on the state budget is disputed. State officials have described the cost of the Affordable Care Act's expansion as sustainable, citing in part corresponding drops in the number of poor, uninsured patients showing up at hospitals.

Cassidy on Monday said he was referring to the cost of the program as a whole, calling the traditional Medicaid program "a huge problem."

"There is no free lunch," Cassidy said. "At some point, you have less ability to address other needs."

Cassidy has continued to push to repeal and replace the ACA, also known as Obamacare, despite the dramatic failure of earlier Republican efforts in the U.S. Senate. The latest attempt, which would've passed a stripped-down bill in a bid to continue negotiations with House Republicans, went down in defeat earlier this month when Republican senators John McCain, Susan Collins and Lisa Murkowski joined Democrats in voting against it.

Senators spend a lot of time in airports, and Bill Cassidy was obviously trying to be effici…

President Donald Trump has blasted Senate Majority Leader Mitch McConnell, R-Kentucky, over the failure and urged him in a series of stinging tweets to return to work on the issue. Both Cassidy and Louisiana's other U.S. senator, John Kennedy, voted in favor of each previous repeal bill.

Cassidy said he's been in regular touch with the White House and the administration's healthcare officials on crafting his plan, meeting "two or three times per week."

Following his address at Press Club, Cassidy said pressure from Trump is helping drive the continued debate on repealing Obamacare.

A prime component of Cassidy's plan would cap most federal Medicaid funding to states and shift the appropriations to a block grant. The senator said Monday those changes would allow each state flexibility to tailor healthcare programs as each sees fit while protecting taxpayers from rising costs.

Critics of Cassidy's proposals, though, said that amounts to a substantial cut in the Medicaid funding that would jeopardize care for the elderly, disabled and low-income residents in Louisiana.

Jan Moller, director of the Louisiana Budget Project, which advocates on behalf of low- and moderate-income families in the state, said the cuts in the Cassidy-Graham-Heller bill would leave states scrambling to cover inflating costs.

"This would rip a large and growing hole in our state budget while eliminating all guarantees of assistance for low-income residents," said Moller, whose group has actively opposed other recent Republican proposals to replace the Affordable Care Act.

Cassidy expressed some optimism Monday that certain provisions in his proposal — especially what he termed a "fairness principal" to even-out the federal healthcare funding going to each state — might win some Democratic support. Louisiana would break roughly even under the proposal, Cassidy said.

He added that he plans to participate in hearings on some "narrowly limited" proposals to shore up the individual health insurance marketplaces.

Moller disputed the idea that the plan being pushed by Cassidy, Graham and Heller might win bi-partisan support.

"Sen. Cassidy and his colleagues should focus their energy on strengthening the individual marketplaces, rather than wasting precious time on yet another hyper-partisan bill that guts Medicaid, roils the marketplaces and eliminates protections for people with pre-existing conditions," Moller said.

Rolling back the Affordable Care Act, the signature legislative achievement of former President Barrack Obama, was a key pledge in the campaigns of many House and Senate Republicans, including Cassidy, who was elected to the U.S. Senate in a 2014 run against then-Democratic Sen. Mary Landrieu.

The senator said he wasn't certain whether the proposal would gain enough traction to make it out of the Senate — but said he intends to keep pushing for what he views as a responsible, conservative alternative to the Affordable Care Act.

"One thing I will guarantee is that I'll continue to fight to come up with a plan that fulfills President Trump's campaign pledges and returns power to patients, returns power to states and is both fiscally sustainable for the individual as well as for the taxpayers," Cassidy said.

While reading up on U.S. Sen. Bill Cassidy's latest comments on the health care bill he's co-sponsoring with South Carolina's Lindsey Graham a…

Despite setbacks, Cassidy plugs away at Obamacare repeal effort, with latest draft bill due Monday

WASHINGTON — For months, Louisiana Senator Bill Cassidy has poured his time into possible replacements for the Affordable Care Act. And he's c…