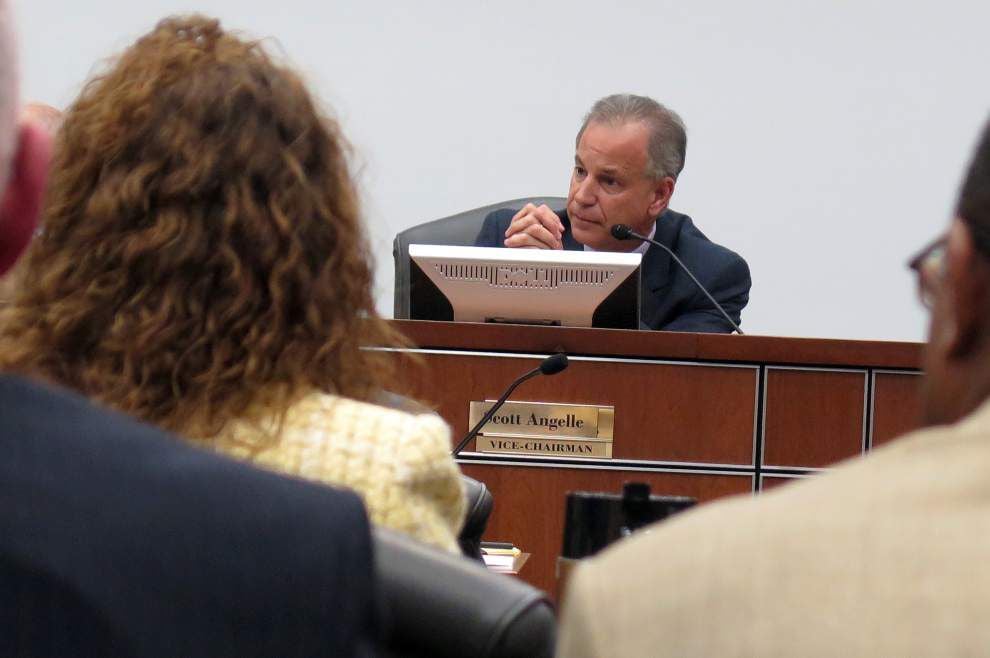 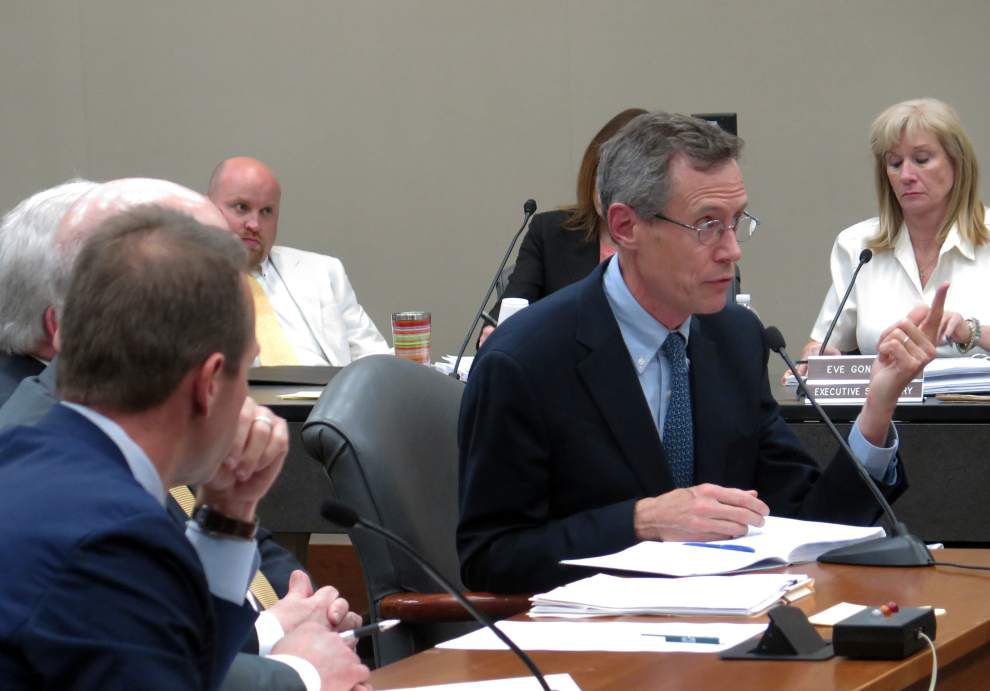 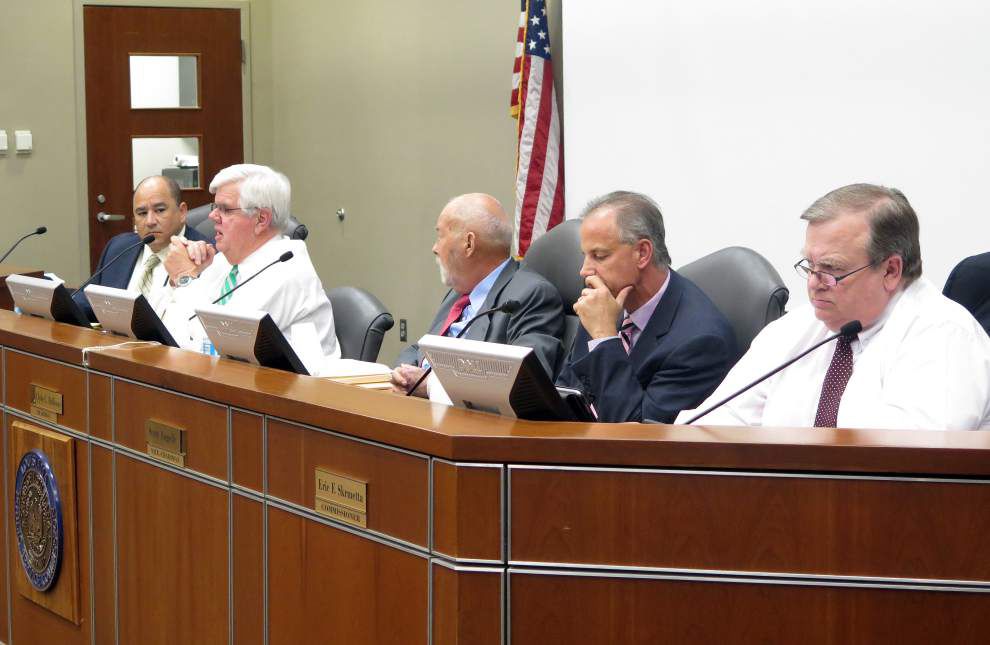 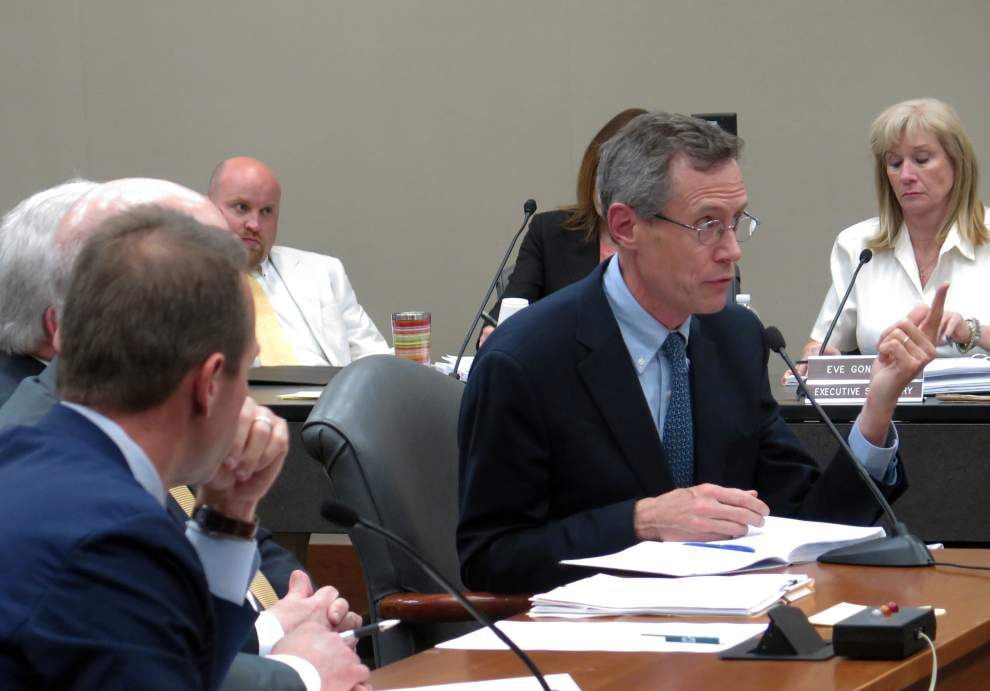 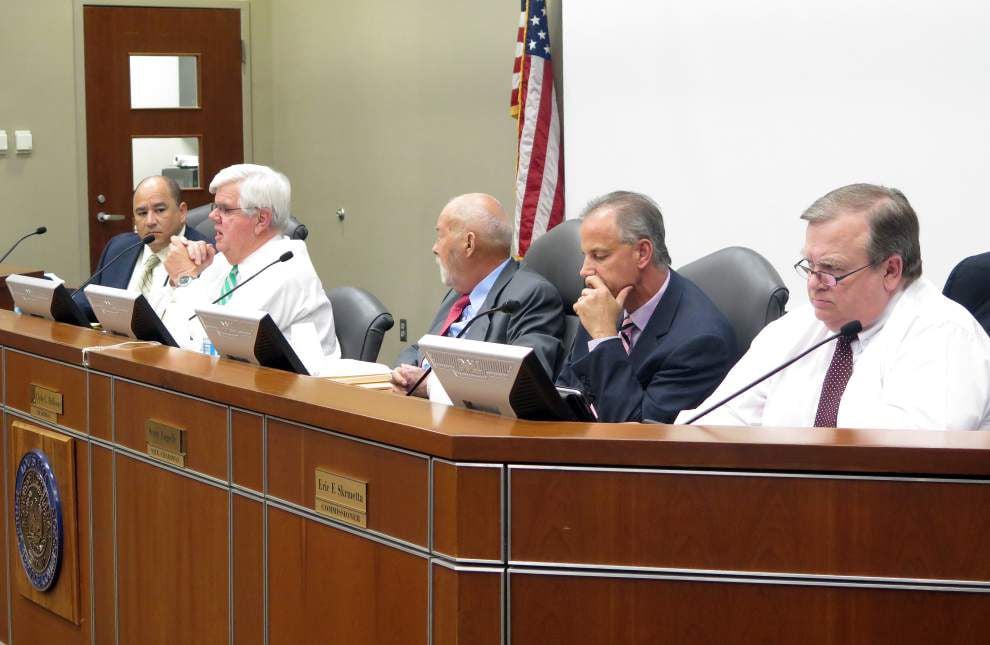 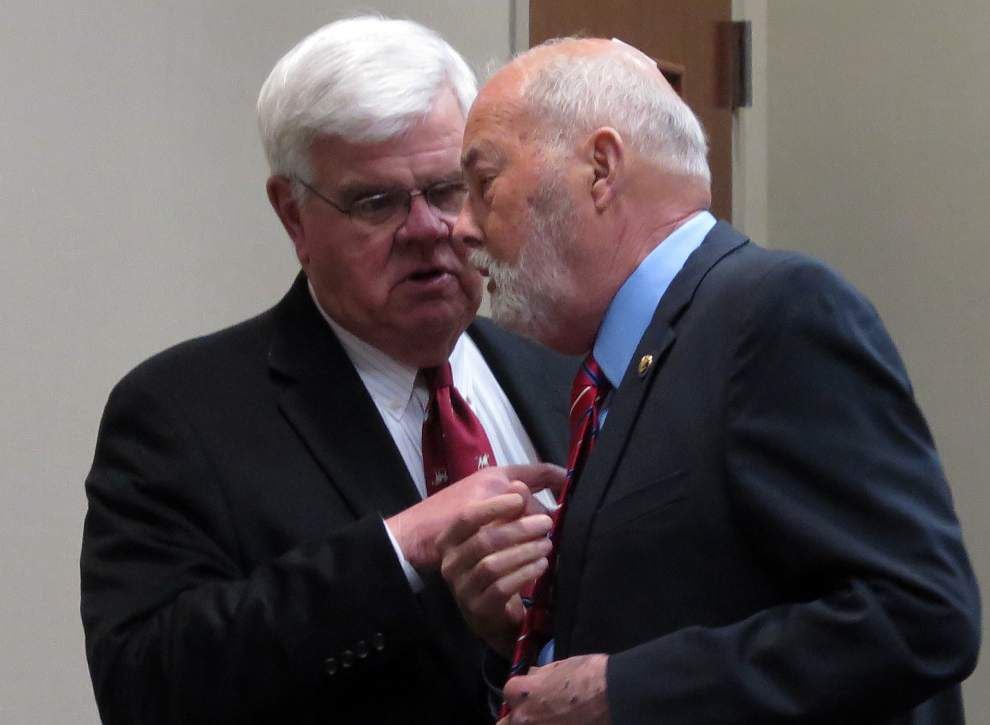 Advocate Photo by MARK BALLARD – Louisiana Public Service Commission Chairman Clyde Holloway, right, earlier this year led the challenge to the $4.9 billion sale of Cleco Corp. to be sold to a group international investors. He argued that selling the Pineville-based utility wasn't in the best interest of the utility's employees or customers. Holloway's efforts stalled the sale, but eventually the PSC narrowly approved the transaction. Here he speaks with PSC Commissioner Foster Campbell, left, of Bossier Parish.

Advocate Photo by MARK BALLARD – Louisiana Public Service Commission Chairman Clyde Holloway, right, earlier this year led the challenge to the $4.9 billion sale of Cleco Corp. to be sold to a group international investors. He argued that selling the Pineville-based utility wasn't in the best interest of the utility's employees or customers. Holloway's efforts stalled the sale, but eventually the PSC narrowly approved the transaction. Here he speaks with PSC Commissioner Foster Campbell, left, of Bossier Parish.

The $4.9 billion deal to buy Cleco is on after Louisiana regulators reversed themselves late Monday and voted to let the transaction proceed.

Louisiana Pubic Service Commissioner Foster Campbell flipped his position after negotiating from the dais during the hearing. The PSC had rejected the transaction in February. Now, the purchase will close sometime in April.

“I think we did a pretty good deal,” said Campbell, a Bossier Parish Democrat who is running for the U.S. Senate.

Cleco agreed not to raise its rates — currently the highest in the state — until 2020 while also agreeing to pay Cleco’s 286,000 customers an average of $500 each — which could translate into a month or two free electricity or lower monthly bills for the next few years.

Cleco sells electricity in parts of the parishes on the north shore of Lake Pontchartrain, in Acadiana and over much of central Louisiana.

Three of the five elected PSC members were needed to overturn their previous rejection and to approve the sale of Cleco to Macquarie Infrastructure and Real Assets, British Columbia Investment Management Corp. with John Hancock Financial and other investors.

In the end, four of the commissioners voted to approve the transaction, while PSC Chairman Clyde Holloway, R-Forest Hill, voted against.

The Macquarie investors will buy at a 15 percent premium, about $55.37 per share, all of Cleco’s stock, then take the 80-year-old company private. Cleco is the last shareholder-owned, Louisiana-based company that operates only in this state.

In the hours before the PSC convened Monday’s hearing, the Cleco buyers sweetened their offer.

Andrew Chapman, of Macquarie, said the buyers would put $136 million into escrow at closing. The commissioners could then decide how the money is distributed.

The PSC could apply the money against monthly bills — about $500 for every Cleco customer — all at once, or over the next two years, or spread over the next five years.

The new proposal continues to extend a commitment to guarantee for a decade the head count, salaries and benefits for Cleco’s 1,205 employees as well as health benefits for retirees. Additionally, the proposals renew previously announced provisions to allow Louisiana governmental pension plans to buy up to 10 percent of Cleco’s equity, which would make them part owners of the enterprise.

Going into the fifth hour of what would be a six-hour hearing, Campbell interrupted Chapman’s presentation to say that he would consider changing his vote if the Cleco owners would agree not to ask for a rate increase for two more years.

Darren J. Olagues, president of Cleco Power LLC, responded, “I can agree to that.”

Cleco is set to have their rates reviewed starting in 2017, with the new rates going into effect in 2018. Very generally, rates are set through a formula that takes into account the cost of making and delivering electricity plus a profit. If those costs go up — and that has been the trend around the country — then the amount that consumers pay each month increases.

Olagues’ agreement means that Cleco would postpone its request to increase rates until at least the summer of 2019 for prices that would apply in 2020.

The mood in the room shifted immediately after the deal was struck.

PSC Commissioner Lambert Boissiere III, who represents New Orleans and parts of Baton Rouge, talked about how easy Olagues will be to work with as the head of the new Cleco. Groups of employees and lawyers supporting the transaction frequently broke into applause when points were made in their favor, while the opponents had trouble getting their clapping going. By the time the PSC voted at 7:15 p.m., most of the opponents had left.

Meanwhile, lawyers for the buyers and for the PSC staff huddled in hallways, going over wording. The final motion was handwritten on a yellow legal pad and had to be read aloud to commissioners before they voted.

“I am deeply disappointed by today’s outcome and I fear for the long-term consequences for Cleco’s captive ratepayers,” PSC Chairman Holloway said after the vote. “Cleco as we know it has ceased to exist. It is now owned by a private foreign investment company that plans to flip it in 8-10 years.”

Casey DeMoss, whose New Orleans-based Alliance of Affordable Energy has steadfastly opposed the sale, said after the vote that her organization is considering filing a lawsuit to stop the transaction. She argued that PSC procedures require a careful review of financial proposals, including testimony from experts. Releasing the new proposals literally a couple hours before the hearing circumvented that process.

DeMoss likened Macquarie’s new deal to rearranging furniture in a house rather than repairing cracks in the foundation.

In particular, the Macquarie business plan is to use borrowed money to borrow more money and thereby dramatically increase the debt that Cleco owes. Interest rates could go up eight to 10 years when the debt becomes due, leaving Cleco customers exposed, which would mean higher monthly bills.

“The fundamental financial flaws of this transaction are as serious as they ever were. Macquarie and Cleco’s latest promises are nothing more than window dressing to move around the same money and distract from the real issues,” DeMoss said.

Many of Cleco’s customers will receive a free month of electricity in July, possibily August too, as the utility makes good on a promise made …

Clyde Holloway, chairman of the Louisiana Public Service Commission and a former congressman, died at his home in Forest Hill Sunday night.

The chief executive officer who led Cleco through the utility’s $4.9 billion sale – and recently was embroiled with domestic violence allegati…