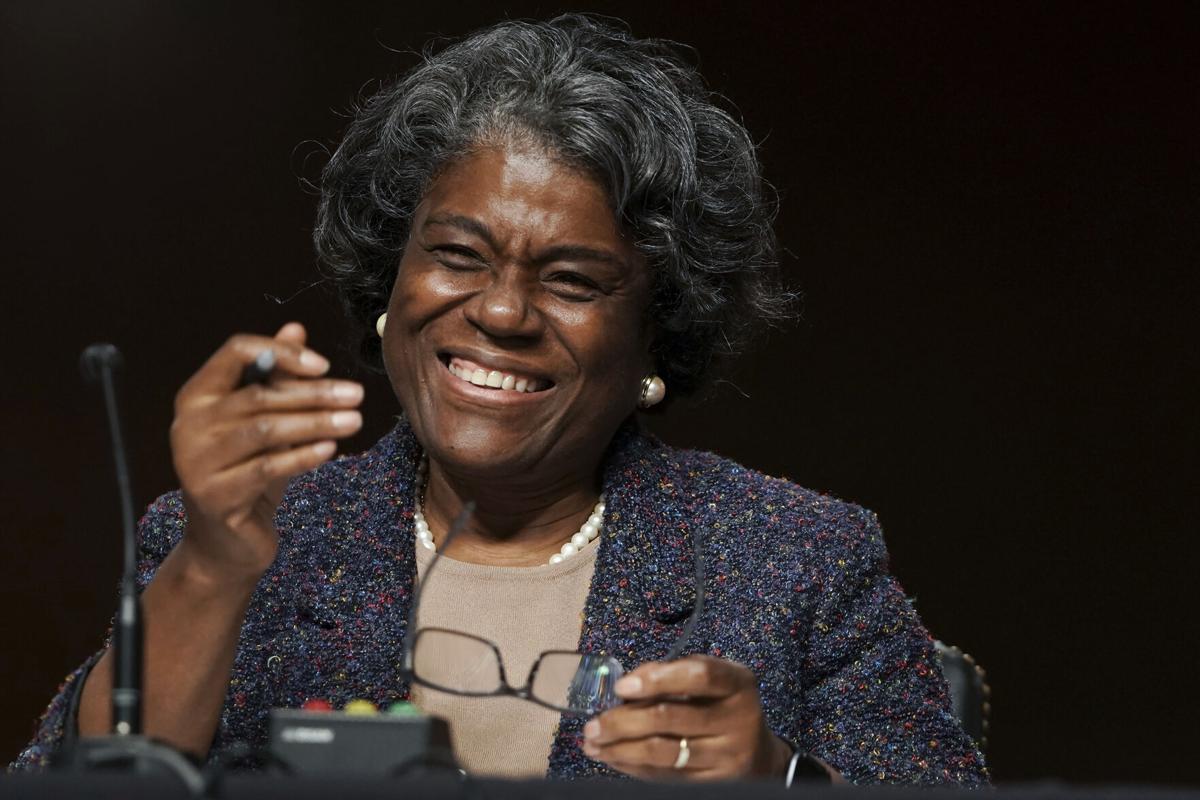 United States Ambassador to the United Nations nominee Linda Thomas-Greenfield smiles as she testifies during for her confirmation hearing before the Senate Foreign Relations Committee on Capitol Hill, Wednesday, Jan. 27, 2021, in Washington. 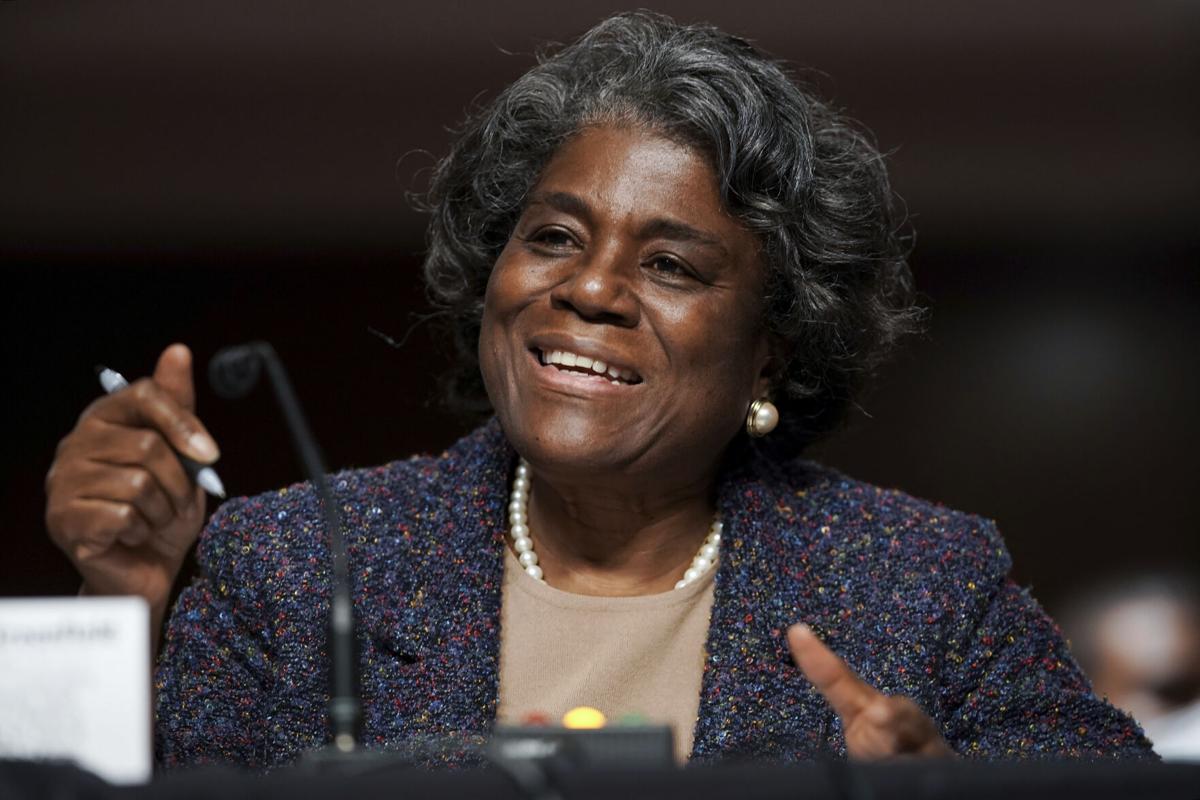 United States Ambassador to the United Nations nominee Linda Thomas-Greenfield testifies during for her confirmation hearing before the Senate Foreign Relations Committee on Capitol Hill, Jan. 27.

United States Ambassador to the United Nations nominee Linda Thomas-Greenfield smiles as she testifies during for her confirmation hearing before the Senate Foreign Relations Committee on Capitol Hill, Wednesday, Jan. 27, 2021, in Washington.

United States Ambassador to the United Nations nominee Linda Thomas-Greenfield testifies during for her confirmation hearing before the Senate Foreign Relations Committee on Capitol Hill, Jan. 27.

In move many expect to signal U.S. reengagement in the world body, the U.S. Senate Tuesday confirmed Baker-native Linda Thomas-Greenfield to the cabinet-level position of Ambassador to the United Nations.

She was confirmed on a 78-21 vote, with one senator not voting. Both U.S. Sen. John N. Kennedy, R-Madisonville, and U.S. Sen. Bill Cassidy, R-Baton Rouge, voted in favor of confirming Thomas-Greenfield.

“I’m proud she’s from Louisiana, but I’m more proud of her service to our country,” Cassidy said in a statement after the vote.

The 68-year-old LSU graduate is expected to be sworn in Wednesday by Vice President Kamala Harris. Then, she’s expected to travel to New York City, where the UN headquarters are located, to present her credentials to U.N. Secretary General António Guterres on Thursday.

Almost immediately Thomas-Greenfield will be thrust into dealing with climate change and COVID-19 along with wars in Syria and Afghanistan and several humanitarian crises.

"This confirmation sends a message that the United States is back and that our foreign service is back," U.S. Rep. Karen Bass, D-Calif., told the Associated Press. Bass chairs a House Foreign Affairs subcommittee on Africa, global health, and global human rights.

"We as a country and as a world are safer with Linda Thomas-Greenfield serving as the United States ambassador to the United Nations,” Bass added.

Members of the Senate Foreign Relations Committee have voiced concerns that United States’ world leadership had slipped during President Donald Trump’s tenure because he focused more on U.S. concerns at home. In the breach, China stepped forward, pressuring diplomats to accept its wording on directives and hire its citizens to work in the body.

U.S. Sen. Ted Cruz, R-Texas, has claimed that Thomas-Greenfield could be soft on China and pointed to a speech she gave in October 2019 during which she did not scold the communist leadership on its human rights record. During her confirmation hearings, Thomas-Greenfield said she regretted the speech, which she said was mostly aimed at getting more students of color interested in the foreign service.

Thomas-Greenfield, who because of protocol couldn't comment after the vote until she is sworn in Wednesday, told The Advocate and The Times-Picayune on Saturday how growing up in Louisiana informed her world views and helped her engage in constructive talks with leaders in other countries.

“I am truly excited about the opportunity to serve my country again and I am ready to get to work,” she added.

The U.S. Senate is ready to begin Monday the voting process expected to install LSU alumna and Baker native Linda Thomas-Greenfield in one of …

“He has witnessed her effectiveness and dedication in action,” Dujarric told Politico news magazine.

Having served for 35 years in the Foreign Service, Thomas-Greenfield comes to the job with considerably more experience than most UN ambassadors.

Thomas-Greenfield grew up in segregated Baker, graduating in 1970 from an all-Black high school in Zachery because nearby Baker High School was all White. One of the first African Americans to attend LSU, she was there at the same time as David Duke, who later became a leader in the Ku Klux Klan for a while.

She went to the University of Wisconsin for graduate school and in 1982 was one of first Black women to join the U.S. Foreign Service.

In 1994, while serving in Rwanda during that country’s genocidal civil war, she had to talk her way out being killed by a solider.

President George W. Bush, a Republican, named her ambassador to Liberia from 2008 to 2012. President Barack Obama, a Democrat, moved Thomas-Greenfield to head the State Department’s office for African Affairs.

In 2017, she retired and worked for an international relations think tank.

Thomas-Greenfield’s husband, Lafayette Greenfield, also worked at the State Department before his retirement, as does their daughter Lindsay Jamila Greenfield. Her son, Lafayette Greenfield II, who the family calls “Deuce,” is a partner in the Washington, D.C. branch of the Seattle-based law firm of Davis Wright Tremaine LLP.