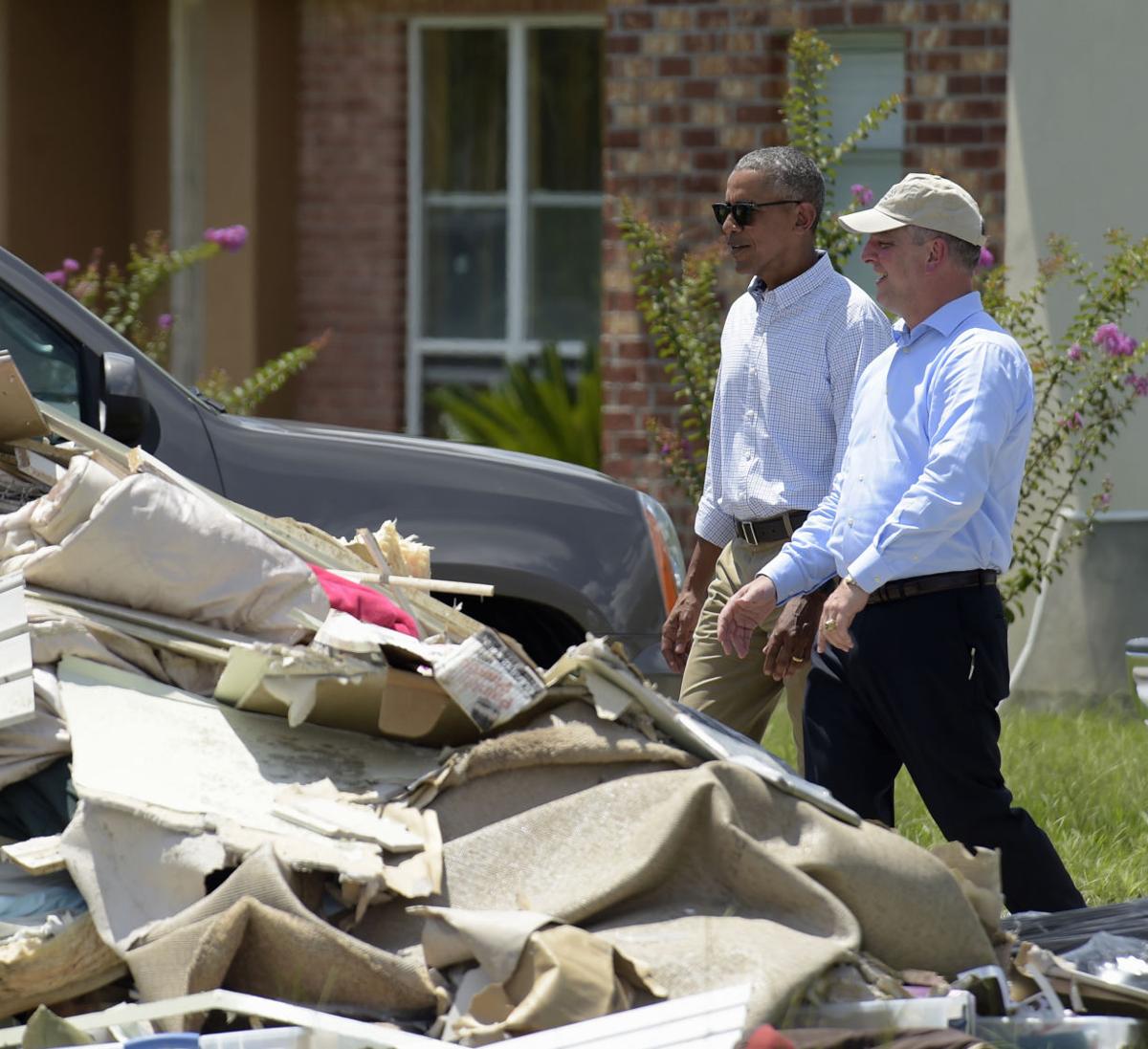 President Barack Obama and Louisiana Gov. John Bel Edwards tour Castle Place, a flood-damaged area of Baton Rouge, Aug. 23. Obama is making his first visit to flood-ravaged southern Louisiana as he attempts to assure the many thousands who have suffered damage to their homes, schools and businesses that his administration has made their recovery a priority. (AP Photo/Susan Walsh) 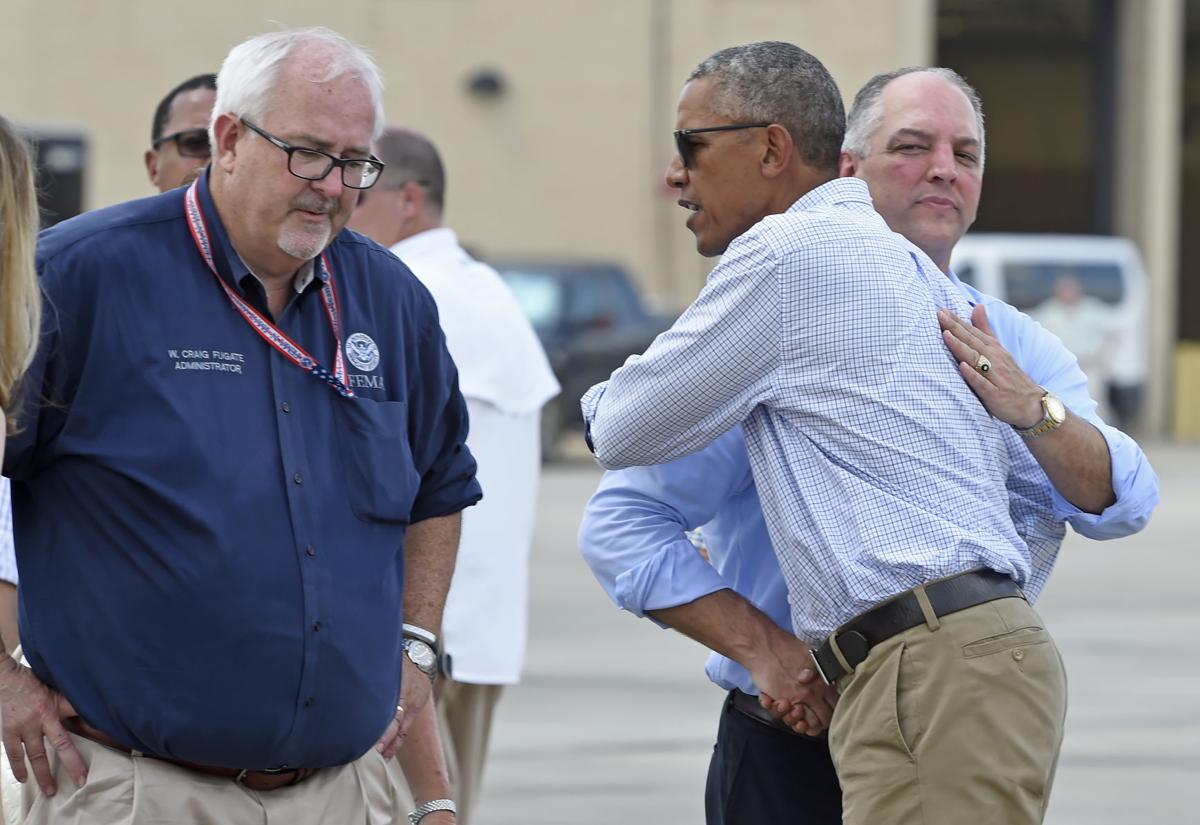 President Barack Obama and Louisiana Gov. John Bel Edwards tour Castle Place, a flood-damaged area of Baton Rouge, Aug. 23. Obama is making his first visit to flood-ravaged southern Louisiana as he attempts to assure the many thousands who have suffered damage to their homes, schools and businesses that his administration has made their recovery a priority. (AP Photo/Susan Walsh)

WASHINGTON — The White House on Thursday agreed that Louisiana has met its threshold to qualify for an increased funding share from the federal government for recovery efforts from the catastrophic flooding that swept the state last month.

That means state and local governments will have less of the tab to pick up for public relief efforts, such as debris removal or the cost of deploying the National Guard and expenses related to some non-profit activities.

The White House announcement that Louisiana will only be on the hook for 10 percent of the cost for public assistance efforts rather than 25 percent came as Gov. John Bel Edwards embarked on a lobbying effort across Washington, D.C., to secure additional flood relief.

The 90-percent cost share automatically kicked in when the state's disaster costs topped $621 million, but leaders saw it as a win as they try to secure even more money from Congress before it recesses at the end of the month.

"This much needed help creates a clearer path forward, but we still have a long way to go and will continue to ask the federal government for additional assistance," Edwards said. "While it will take time to complete the rebuilding process, this amended cost share will enable us to help our people come back stronger than ever.”

Officials have said that Louisiana suffered nearly $9 billion in damage from the floods that swept across the southern part of the state last month and North Louisiana in the spring.

Edwards spent much of Thursday in closed-door meetings with members of Congress and the Obama administration, making his pitch for a $2 billion aid package for infrastructure, housing and economic development recovery efforts, as well as other aid efforts. The $2 billion ask would be on top of the nearly $200 million that FEMA has already authorized in individual assistance for flood victims.

"The challenge here is not just that we are trying to make our case and bring people up to speed on what happened in Louisiana – the severity of the flooding – but there is a timing element," Edwards said in an interview with The Advocate in Washington on Thursday.

Congress came back this week after a seven-week recess, but is expected to break again at the end of September. The U.S. House and Senate are not scheduled to return again until Nov. 14, once the presidential race and most Congressional elections are decided.

Edwards said he currently sees opportunity for the additional funding to come through a continuing resolution or omnibus legislation.

"I feel optimistic right now that we are going to be able to get something done," he said. "We need this and we need it as soon as possible. A big part of this is just educating folks in Congress about how severe this really was."

Edwards is scheduled to continue to hold meetings Friday in Washington. He will also testify during a hearing on FEMA's response to the flooding.

Last week, Edwards met with the entire Louisiana delegation to plot out a plan for seeking federal aid – a meeting he and all members of the delegation described as "productive" after it ended.

But it's still unclear what form the aid package might take.

Edwards said he would like to see a clean continuing resolution or omnibus legislation that would direct funds down to Louisiana quickly.

House Majority Whip Steve Scalise, R-Metairie, said he thinks that there is more work to be done to craft a plan that can be presented to the GOP-controlled House. He has arranged for Edwards to meet with the chamber's top brass when the governor returns to Washington next week.

"Everybody recognizes now, I think, that this was a massive storm – it wasn't your regular rain event – and there is a serious need," Scalise said. "It's our job as a delegation to come together and figure out the best response to bring forward."

"Everyone we've spoken to realizes there is a real human need," Cassidy said, but he also stressed that "time is of the essence" with the clock winding down toward another congressional recess.

Cochran spokesman Chris Gallegos said that budget leader, who was instrumental in securing aid for the Gulf Coast in the wake of Hurricane Katrina, viewed Thursday's meeting as productive and he applauded the ongoing advocacy on behalf of flood victims.

“He will continue working with them on to determine the appropriate federal response to this serious natural disaster,” Gallegos said.

Edwards, who also spent time meeting with Housing and Urban Development Secretary Julian Castro to discuss housing recovery efforts, will testify Friday on the Federal Emergency Management Agency's response to the flood, before hitting up the lobbying rounds again.

"I feel optimistic right now that we are going to be able to get something done," Edwards said Thursday afternoon. "We need this and we need it as soon as possible. A big part of this is just educating folks in Congress about how severe this really was."

Gov. John Bel Edwards will spend the next two days making the case for a $2 billion federal … 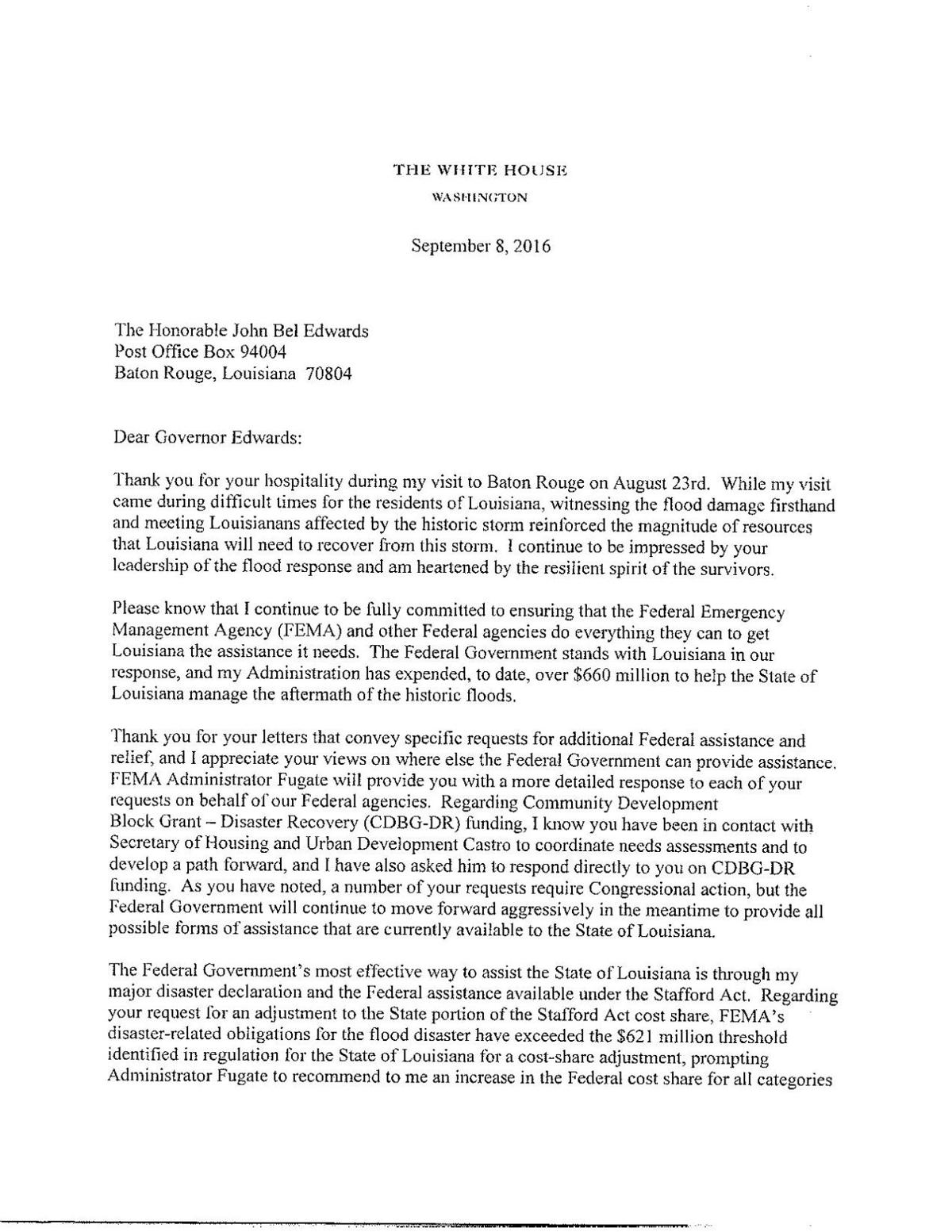 While he’s not physically bringing a check back home, Gov. John Bel Edwards and the state’s delegation in Congress have achieved a significant…

East Baton Rouge Mayor-President Kip Holden was not invited to testify about flood relief Friday at a subcommittee hearing for the U.S. Congre…

WASHINGTON — Frustrations over the federal response to Louisiana's catastrophic August floods were aired during a hearing on Capitol Hill on Friday.

Livingston Parish students will regain a sense of routine Monday, returning to classes for the first time since nearly a month ago when floodw…

On the night of Aug. 15, a determined crew working in knee-deep water managed to drive 40 school buses to higher ground from where they sat pa…

Efforts to secure a federal flood relief package for Louisiana are beginning to ramp up as Congress' October recess quickly approaches, but it…

The White House is calling on Congress to approve a $2.6 billion federal aid package "as soon as possible" to provide funding for Louisiana ho…

The Metro Council on Wednesday made perhaps the most sweeping change to its flood ordinance yet, meaning many people now won't have to worry a…