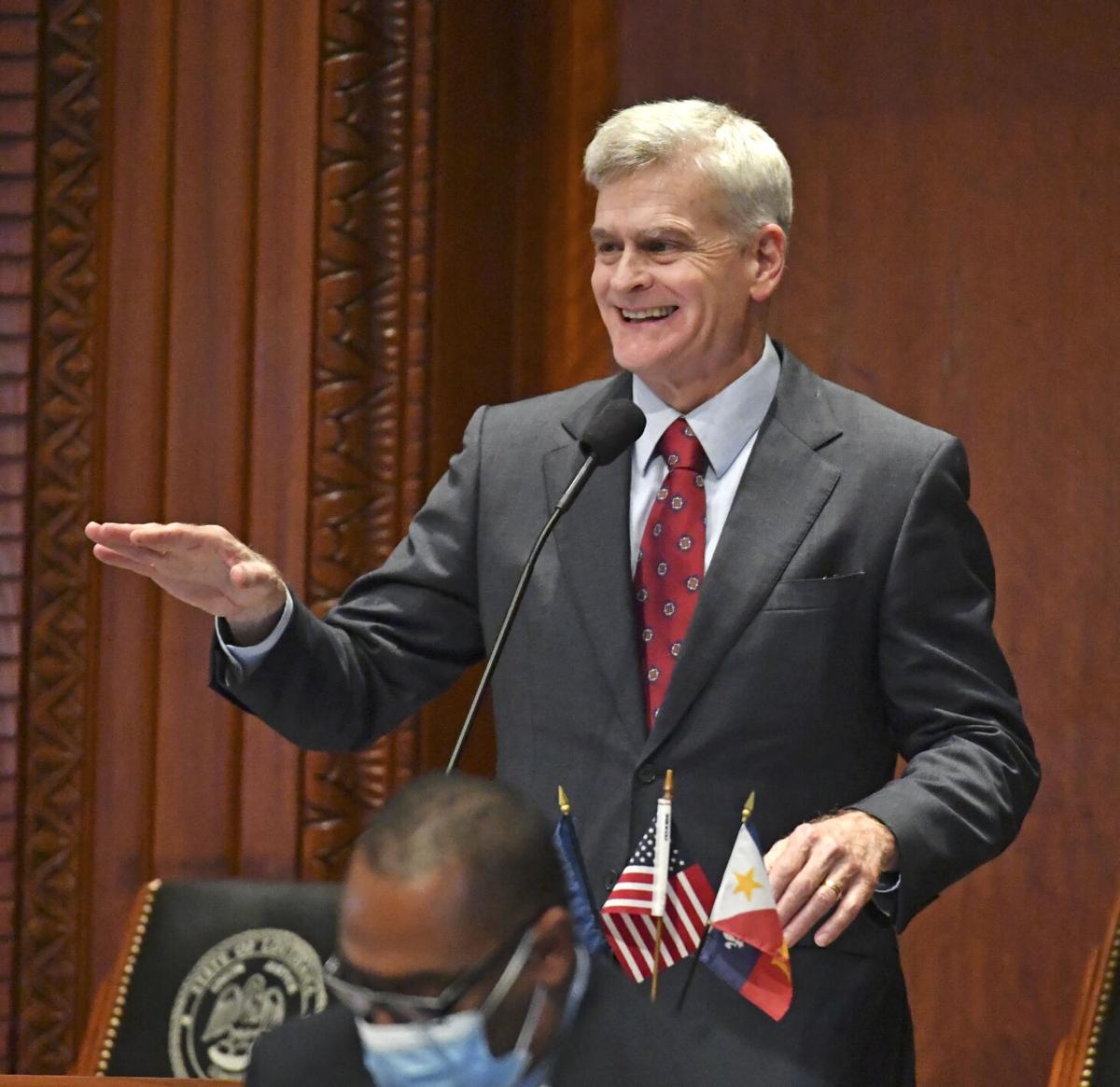 US Sen. Bill Cassidy addresses the Louisiana House of Representatives, Tuesday, May 4, 2021, at the State Capitol in Baton Rouge, La. 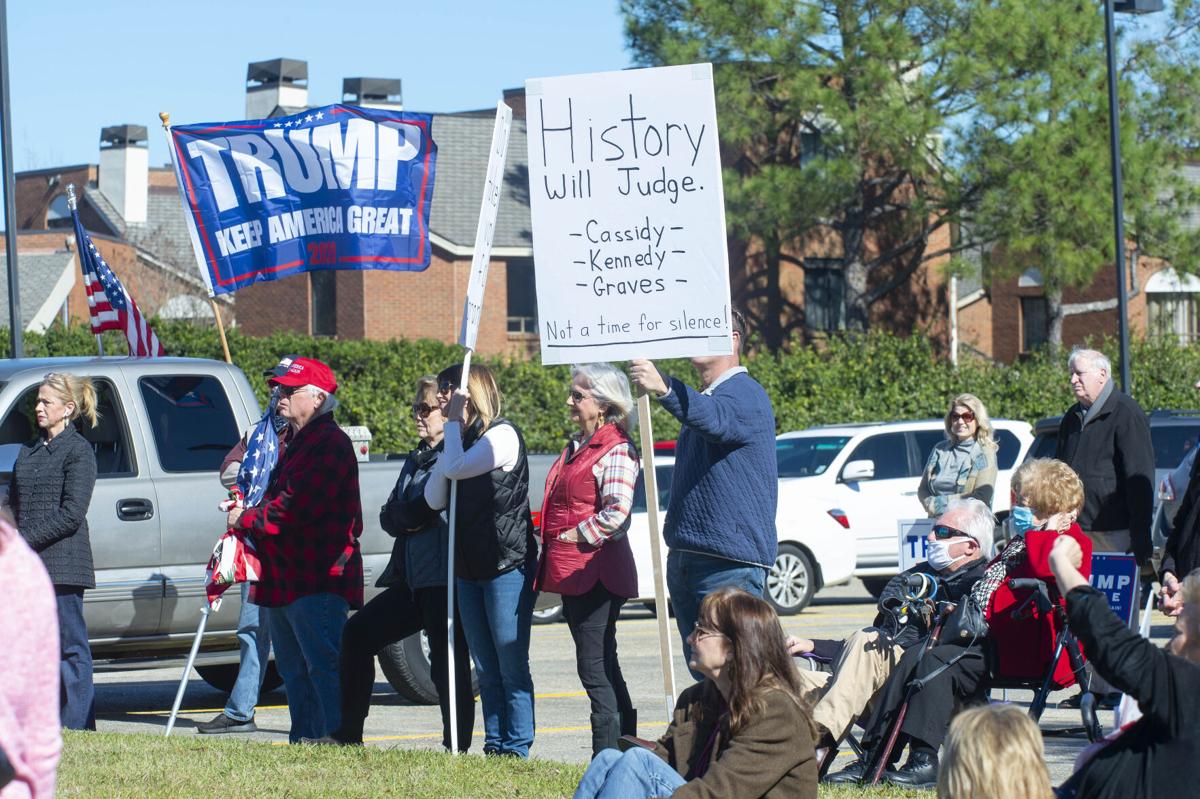 Supporters of President Donald Trump assemble and speak at a protest in a vacant lot next to the Hilton Ave. office building where Sen. Bill Cassidy has on office, regarding the presidential election and electoral college vote, Tuesday, Jan. 5, 2021 in Baton Rouge.

US Sen. Bill Cassidy addresses the Louisiana House of Representatives, Tuesday, May 4, 2021, at the State Capitol in Baton Rouge, La.

Supporters of President Donald Trump assemble and speak at a protest in a vacant lot next to the Hilton Ave. office building where Sen. Bill Cassidy has on office, regarding the presidential election and electoral college vote, Tuesday, Jan. 5, 2021 in Baton Rouge.

Listen to what leading Republicans are saying about U.S. Sen. Bill Cassidy, who sits atop the state’s Republican hierarchy.

“The Republican base no longer trusts him because he puts his loyalties with the Biden agenda,” says state Rep. Blake Miguez, who heads the Republican caucus in the Louisiana House.

“He’s got a long way to go to redeem himself in the eyes of conservatives and Republicans in the state,” says former state Rep. Woody Jenkins, who chairs the state party in East Baton Rouge Parish.

Cassidy “is a man of principle and conscience and wants to get things done for the people of Louisiana,” says former U.S. Sen. John Breaux.

“Sen. Cassidy is showing the kind of independence that many voters in Louisiana appreciate,” says former U.S. Sen. Mary Landrieu. “He puts the needs of our state and country before his political party, and I for one admire him for that.”

Only months after easily winning a second term, Cassidy has turned the world upside down in Louisiana politics. He’s taken a series of votes and made a number of statements against former President Donald Trump that have befuddled his presumed Republican allies and won cheers from Democrats. Most recently, he has been part of the so-called “Gang of 10,” a bipartisan group of senators negotiating the $1.2 trillion infrastructure bill with President Joe Biden, a package the Senate is poised to approve.

All of these developments appear all the more astonishing given the hyper-partisan nature of politics today.

As a result, Cassidy has become a major bipartisan player in Washington and is now popping up regularly on cable TV and Sunday news shows. In sharp contrast, Louisiana’s other Republican senator, John Kennedy, is continuing to throw rocks at Biden and the Democratic leadership, a role that strengthens his bid for reelection next year but reduces his ability to get things done. Kennedy authored a bipartisan bill just signed into law by Biden that allows people to dispose of unused opioid prescriptions at VA medical center drop boxes.

“For a guy who’s not flamboyant, Cassidy has become an interesting guy,” said Charlie Cook, a Shreveport native who has spent decades in Washington publishing the widely respected Cook Political Report.

Friends privately say re-election to a six-year term has freed Cassidy to return to his more moderate Republican roots.

Cassidy’s office did not respond to two interview requests, but in a phone press conference with reporters, he was asked if the friction on his right flank makes him nervous.

“I am so comfortable with my life right now,” Cassidy replied.

Generating the greatest angst among Republicans was Cassidy’s Feb. 13 vote to convict Trump on charges of inciting an insurrection at the Capitol on Jan. 6 that left 140 police officers injured and five people dead. Cassidy was one of only seven GOP senators who voted to convict.

With Trump continuing to command fervent loyalty among rank-and-file voters in Louisiana, Cassidy’s stand prompted the executive committee of the state Republican Party to immediately censure him. It was a symbolic repudiation that had no practical impact.

Trump showed his displeasure in June when he endorsed Kennedy’s reelection in 2022.

Kennedy, Trump said, is “the real deal” who “will never let you down,” unlike Cassidy, “who used my name in ads and all over the place in order to get reelected, and then went ‘stupid.’”

Many Republicans are also angry that Cassidy voted to certify the election of Biden on Jan. 6, and later voted to create a bipartisan commission to investigate what happened that day.

Cassidy has alienated himself further from Republicans by working with four GOP colleagues and five Democrats to craft the bipartisan infrastructure measure with other senators and the Biden administration.

“We cannot afford these multi-trillion dollar bills,” said Louis Gurvich, who chairs the Louisiana Republican Party. “Massive tax increases will be necessary to finance this level of spending and inflation will continue to spiral out of control.”

Even while he has enraged conservative Republicans, Cassidy has continued to criticize Biden’s immigration policies and opposed the president’s moratorium on new offshore leases in federal waters, including the Gulf of Mexico.

“I agree with the great majority of his Senate votes since his election,” said Gurvich.

Only 15 years ago, the notion that Cassidy could become Louisiana’s ranking Republican would have been inconceivable.

For one thing, he had been a Democrat who gave money to Democratic candidates, including a $500 donation to Mary Landrieu in 2002. By then, Cassidy had spent years working as a liver and stomach specialist at Earl K. Long Medical Center, the charity hospital in Baton Rouge that served many poor people.

Cassidy caught the political bug and in 2006 won an open state Senate seat in Baton Rouge, running as a Republican who favored more spending on LSU and public health care.

He then surfed the GOP wave that was washing over Louisiana.

In 2008, following the departure of then-U.S. Rep. Richard Baker, a Republican, he won a seat in Congress to represent Baton Rouge and neighboring parishes.

In 2014, Cassidy challenged Landrieu, who had fended off repeated Republican challenges and was the only Democrat left holding statewide office.

Cassidy trounced her, backed by the political machinery of David Vitter, a master political strategist who was then Louisiana’s senior Republican senator.

Over the next six years, Cook said, Cassidy hewed to a traditional path that has fallen out of favor with today’s attention-seeking senators.

“In the old days it was said a freshman or a relatively junior member should be seen, not heard — learn the place, the process, the policy, the people,” said Cook. “The approach was to get those down and then pick an issue and master it. Then you’d use that as your entry point to playing a more active role and then diversify.”

Cassidy didn’t stand out in the Senate until he began championing a conservative alternative to Obamacare that won him praise from Trump and some appearances on national political news shows. In all, he voted 89% of the time with Trump, slightly higher than Kennedy’s 87%, according to a scorecard by fivethirtyeight.com.

In 2020, Cassidy never broke a sweat as he cruised to reelection, so sure of victory that he refused to debate his main Democratic opponents.

One week before election day, Cassidy broadcast a television ad that twice pictured him with Trump, and an announcer intoned, “Stand with President Trump and reelect Bill Cassidy to the U.S. Senate.”

The ad then cut to Trump speaking at a rally.

Cassidy began edging away from Trump in the following weeks, becoming on Nov. 24 the most senior Republican in Louisiana to say Biden won the election. But several people close to him said they believe the events of Jan. 6 shook him up.

Cassidy posted a couple of selfie videos that day while he and other lawmakers fled to safety.

“This is wrong, absolutely wrong,” he said in one. “It is un-American. Period. They should stop. Period. This is about our country. It is not about hooligans.”

After the police regained control of the Capitol and lawmakers reconvened, Cassidy was the only Republican in Louisiana’s six-member GOP delegation who voted to certify the validity of Biden’s election across the board.

In the following weeks, numerous House and Senate Republicans who had sharply criticized the rioters and Trump started to backtrack, as it became clear that the party faithful were sticking by their favorite president and his baseless statements that fraud had cost him the presidential election.

Five weeks later, Cassidy was one of only seven Republican senators who joined with all Democrats to vote to convict Trump in an effort that fell 10 votes short.

“Our Constitution and our country is more important than any one person,” Cassidy said afterward. “I voted to convict President Trump because he is guilty."

On Feb. 28, in a CNN interview, Cassidy said Republicans need to reach out beyond Trump and his base to recapture Congress and the White House.

“Over the last four years, we have lost the House of Representatives, the Senate and the presidency,” he said. “That has not happened during a single four years since Herbert Hoover….If we idolize one person, we will lose.”

On May 28, Cassidy was one of only six Republicans who voted to establish a bipartisan commission to investigate the deadly Jan. 6 attack on the Capitol. Other Republicans blocked the commission’s creation at Trump’s behest.

“The legislation I voted for ensured Republicans had equal power over the commission and set a deadline of Dec. 31, 2021, to prevent a needlessly drawn-out process,” Cassidy said in a statement afterward.

“I was very observant of the reelection campaign,” said Crouere, who hosts a daily program on WGSO-AM. “He was constantly touting Donald Trump. Now there’s a feeling of betrayal. A lot of my listeners are wondering what happened to him.”

Cassidy, who is 63, has defended the infrastructure bill with language that senators more commonly used a generation ago.

“If you look at it, it is something that addresses the needs of a red state like mine but also blue states as well,” he said on the call last week with reporters. “It’s not about one party or the other. It’s about how do we have a better set of jobs for the average American worker, safer highways and more safety from floods, how do we have rural broadband and better urban broadband that serves the needs of tele-health, tele-mental health, education, economic expansion.

Cassidy has also sent out a steady stream of press releases touting bills he has introduced with Democrats.

Scott McKay, writing for the conservative website The Hayride, has no stomach for Cassidy’s bipartisan approach, saying it invariably favors Democratic proposals.

“There will be challengers to Cassidy when he comes up for reelection in 2026,” McKay predicted. “They’ll come from the Right.”

Few people in Louisiana better understand Cassidy’s situation than John Breaux, who won election to the House seven times from Acadiana and then won three elections to the Senate. Breaux was known as a Democrat who worked well with Republicans, as other Democratic senators from Louisiana had done.

“If you’re in the House, you’re running every 24 months,” Breaux said. “You’re scared to death a vote might come up that could hurt you. But if you’re in the Senate, you have enough time to convince the people in your state that what you’re doing is the right thing to do. A good politician will get that done. If not, he will become a former elected official.”

Cassidy “may have been elected with Trump supporting him,” Breaux added. “Does that mean you vote 100% every time Trump raises his finger? Of course not. Your job is not to represent Trump. It’s to represent the people of Louisiana.”

Louisiana in line for $384M to improve roads and bridges; see 5 biggest priorities

Under the Bipartisan Infrastructure Bill being considered before the U.S. Senate Tuesday, Louisiana can expect to receive about $384 million m…