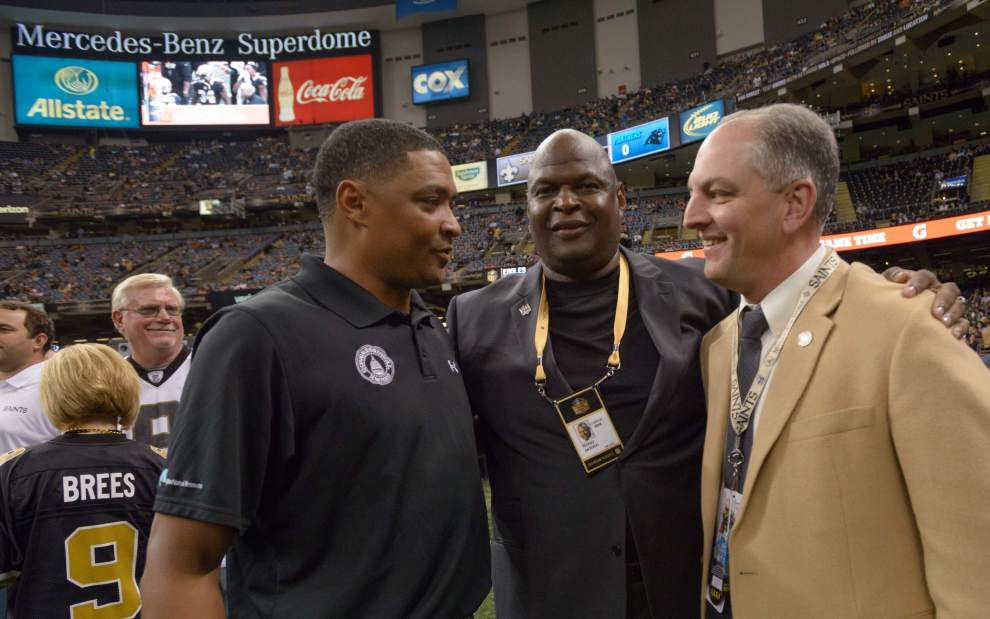 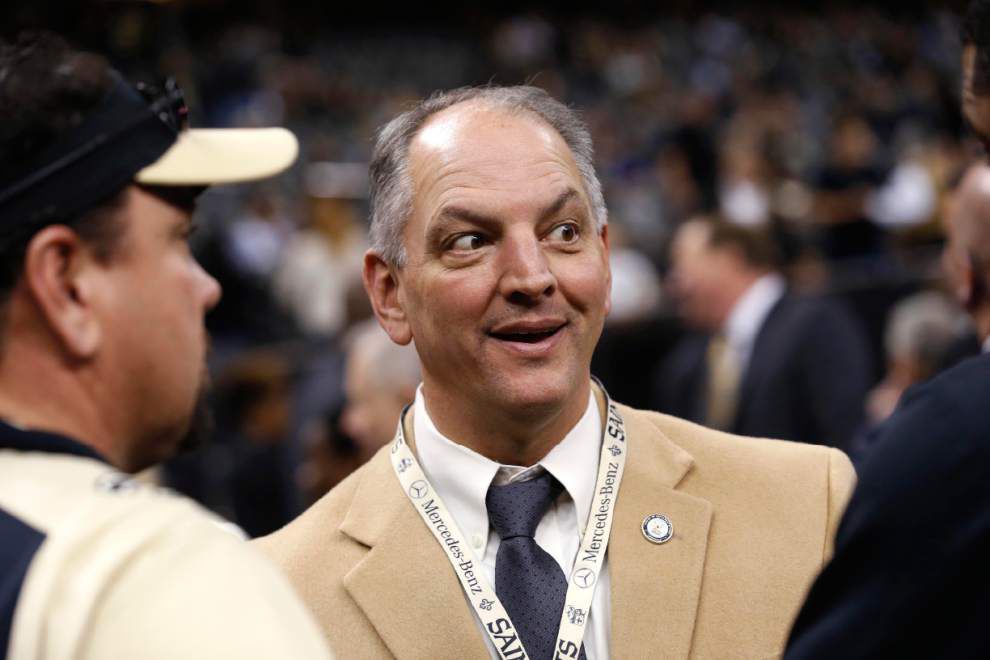 Louisiana Governor-elect John Bel Edwards stands on the sideline before an NFL football game between the New Orleans Saints and the Carolina Panthers in New Orleans, Sunday, Dec. 6, 2015. 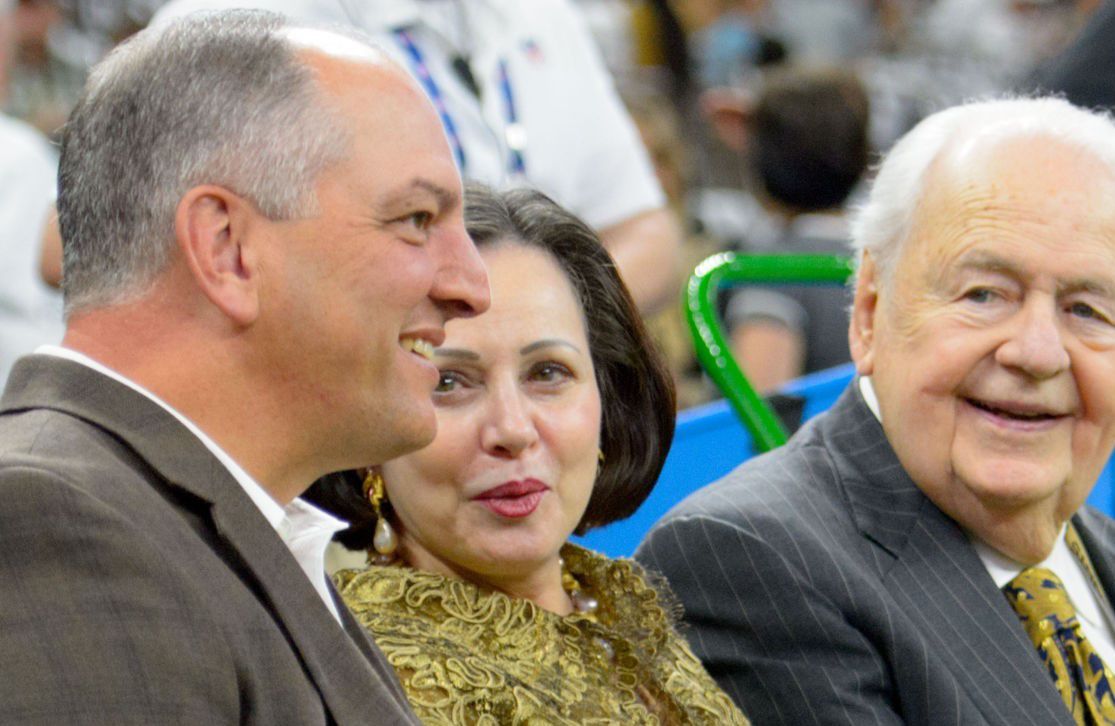 Louisiana Gov. John Bel Edwards sits with Saints owner Gayle Benson and late and former Saints owner Tom Benson before a game against the Oakland Raiders in 2016 at the Mercedes-Benz Superdome.

Louisiana Governor-elect John Bel Edwards stands on the sideline before an NFL football game between the New Orleans Saints and the Carolina Panthers in New Orleans, Sunday, Dec. 6, 2015.

Louisiana Gov. John Bel Edwards sits with Saints owner Gayle Benson and late and former Saints owner Tom Benson before a game against the Oakland Raiders in 2016 at the Mercedes-Benz Superdome.

Louisiana Gov. John Bel Edwards says he hopes both sides can come together amid division over some New Orleans Saints players' decision to sit during the national anthem on Sunday as part of a coordinated protest against social injustice and criticism from President Donald Trump about NFL activism.

"I served in the military — I will always stand for the National Anthem and encourage others to do that," Edwards, a West Point graduate and Army veteran, said Wednesday. "I think we should all recognize that there is a constitutional right to engage in speech in ways that some people find offensive, but having a First Amendment right to do something doesn't make it the right thing to do."

"I happen to think that there are equally effective ways for individuals to express themselves," he said. "I would hope that, as a nation, individuals on both sides of this issue can come together and work to do better."

Edwards, a Democrat, had not weighed in on the simmering controversy until a Wednesday morning appearance on Newell Normand's show on WWL-AM radio.

Prompted by a wave of NFL players kneeling during the anthem in an act of protest against racism and social injustice, Trump suggested that that there should be professional repercussions and urged fans to "leave the stadium" if they see players engage in such protests.

His comments set off a larger league-wide protest over the weekend. Ten Saints players sat on the bench during the national anthem, and four others stood near the group in a show of support before the team's win at Carolina.

"I'm not going to say all the concerns — the reasons motivating the protests — are not legitimate, but there are other ways to do it," Edwards said.

He pointed to the demonstration from the Dallas Cowboys on Monday, when players and staff including owner Jerry Jones and coach Jason Garrett all knelt before the "Star Spangled Banner" was played but stood for the song itself.

"They got as much attention as the teams that choose to have a number of members not stand for the anthem," Edwards said.

Others have come out more forcefully against the demonstrations. Lt. Gov. Billy Nungesser, a Republican, announced he would boycott the team, and some legislators called for the state to reexamine the lucrative incentive deal that it has with the NFL team.

Louisiana agreed in 2009 during the Jindal administration to cover $85 million in upgrades to the Superdome and enter into an ongoing lease of office space from Saints owner Tom Benson as part of a larger incentive deal that runs through 2025.

Attorney General Jeff Landry, also a Republican and a veteran of the Louisiana National Guard, similarly called for a review of the state's ties to the Saints organization amid the protests.

"As someone who served in uniform swearing to protect my country, I am outraged by those who choose to protest by insulting the American flag," Landry said. "I am hugely disappointed Gov. Edwards has not declared his support for determining if we should continue subsidizing these insolent activities."

Edwards said he believes the state is contractually obligated to hold up its end of the agreement with the NFL franchise.

"We will work with the Legislature and other officials to ensure complete transparency as to what those obligations are," he said.

"The American flag and national anthem are symbols of our country and freedom, and they obviously should unite everybody," Edwards said. "We're going to always have differences, but those are symbols that are supposed to unite us."

Those getting state funds 'don't need to be political,' one lawmaker says as Saints incentives eyed

Dan Fagan: Saints players who took a knee don't hate their country, they just don't get how great it is

I was infuriated last week when 10 New Orleans Saints took a knee during the playing of our national anthem. Ten guys, earning a collective $3…

The death of Alton Sterling on July 5, 2016, in Baton Rouge brought former LSU football player Eric Reid to tears, he says in an opinion piece…

SUNBURY-ON-THAMES, England — While Cameron Jordan sat during the national anthem of Sunday's game in order to protest police brutality and rac…

A state senator from New Orleans is coming out in support of the Saints players who refused to stand during the National Anthem on Sunday, eve…