WASHINGTON — Upset by what's been viewed as repeated slights to President Donald Trump, at least one ranking Republican in Louisiana is calling for Utah Sen. Mitt Romney to be censured.

Louisiana GOP Secretary Mike Bayham said his resolution isn't a direct response to Romney's vote with Democrats on Wednesday to impeach Trump over allegations that he leveraged aid to Ukraine for personal political gain. Trump was acquitted in separate 52-48 and 53-47 votes.

But the Louisiana Republican State Central Committee will consider a resolution during its regular meeting Saturday to condemn Romney, the 2012 GOP presidential nominee, over perceived insults to Trump.

“We’ve got a guy who had the honor and privilege of being a nominee of the party — he’s trying to tear Trump down as a candidate and a president,” Bayham said. “I don’t know if it’s a personal issue, vanity or whether it’s that Trump succeeded where he failed.”

WASHINGTON — Louisiana's Republican U.S. senators helped acquit President Donald Trump in his impeachment trial, both voting "not guilty" on a…

A draft of Bayham's symbolic resolution that the state's party leaders will consider cites Romney’s “high-profile personal attack” of Trump, his efforts to “sabotage the 2016 Republican Trump-Pence ticket” and other “belligerent statements and comments about President Trump.”

Bayham said he traveled to Wisconsin and Colorado to campaign for Romney in 2012.

“He just doesn’t care about the party," Bayham said. “The nomination was something that he took for granted.”

Romney spoke from the Senate floor before casting the only GOP "guilty" vote in the impeachment trial and said he expected backlash from some Republicans.

"I am aware that there are people in my party and in my state who will strenuously disapprove of my decision, and in some quarters, I will be vehemently denounced," he said. "I am sure to hear abuse from the President and his supporters."

Trump released a video through Twitter after the vote calling Romney a "Democrat secret asset." 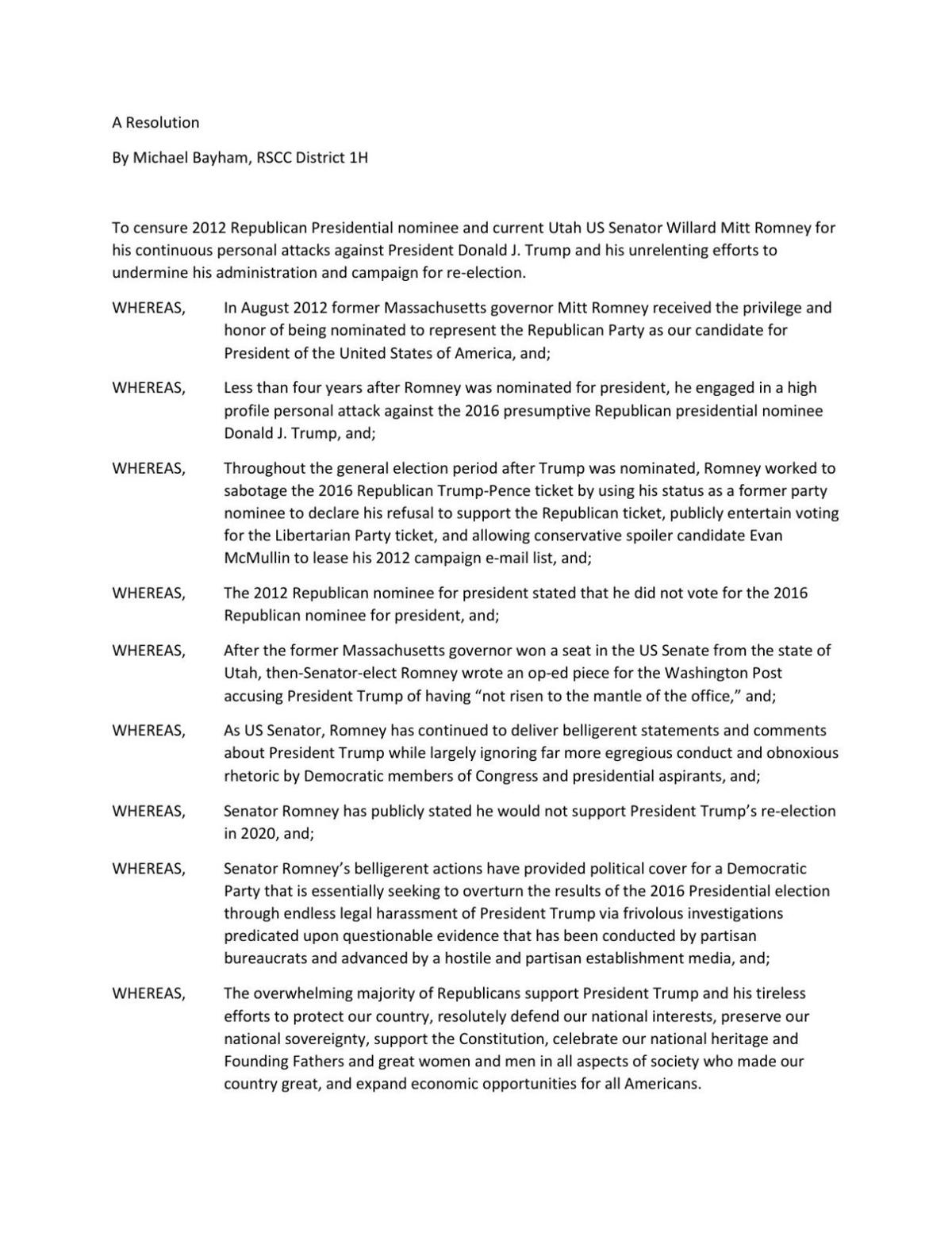 You’ve got to worry about poor Mitt Romney. He probably isn’t getting any sleep over the possibility of the Louisiana Republican Party condemn…