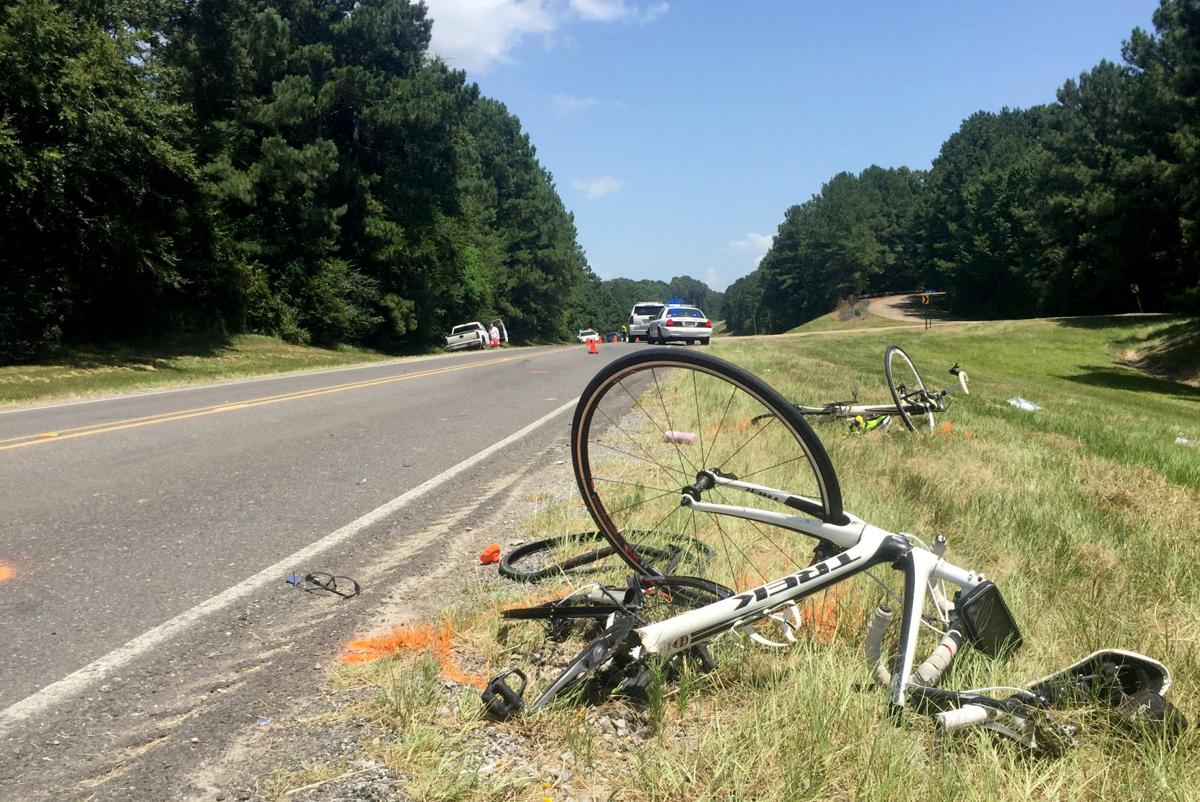 Two bicycles lay on the side of La. 66 in West Feliciana Parish after a fatal crash causing the death of Baton Rouge Metro Councilman Buddy Amoroso. Amoroso and Thomas Clement were struck by a Chevrolet Tahoe while riding. 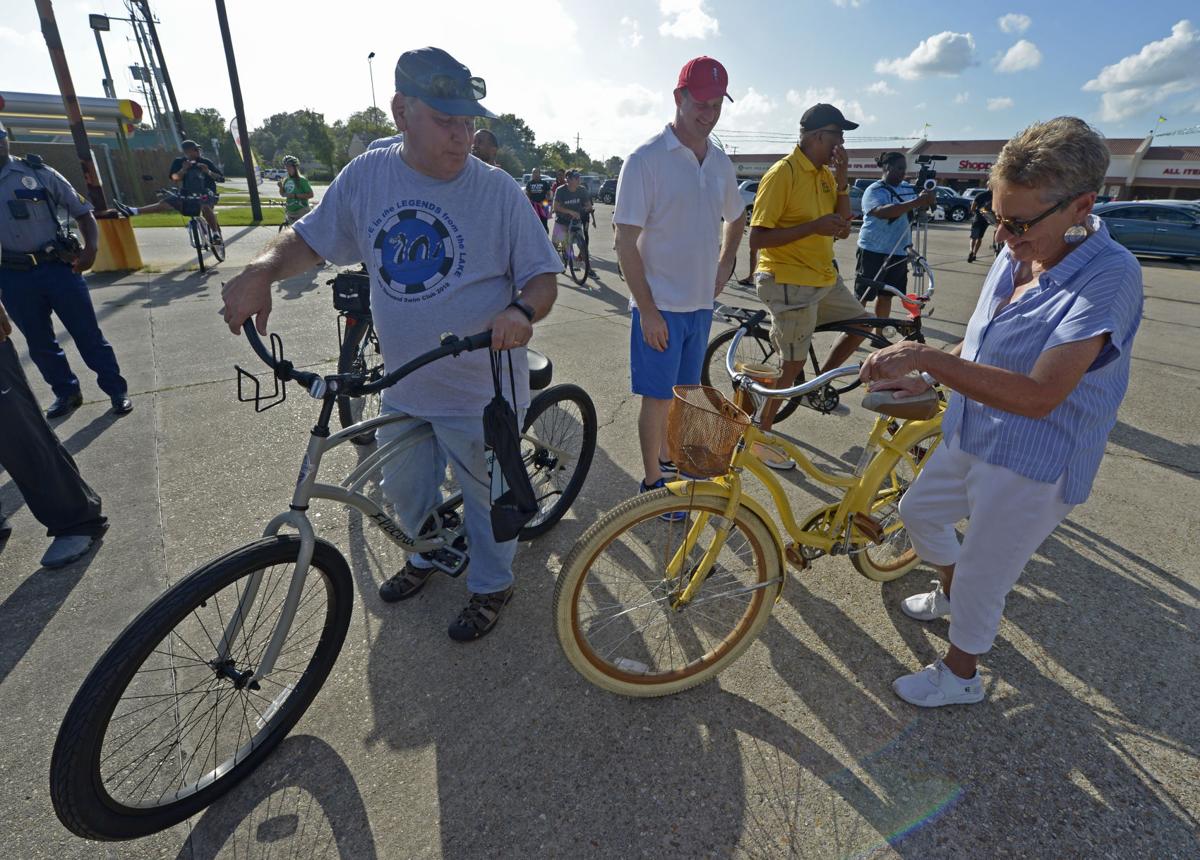 From left, council members Buddy Amoroso, Matt Watson and Barbara Freiberg ready their bikes, Friday, June 22, 2018, before they pedal for peace from Shoppers Value on Government Street to Howell Park and back in Baton Rouge, La.

Two bicycles lay on the side of La. 66 in West Feliciana Parish after a fatal crash causing the death of Baton Rouge Metro Councilman Buddy Amoroso. Amoroso and Thomas Clement were struck by a Chevrolet Tahoe while riding.

From left, council members Buddy Amoroso, Matt Watson and Barbara Freiberg ready their bikes, Friday, June 22, 2018, before they pedal for peace from Shoppers Value on Government Street to Howell Park and back in Baton Rouge, La.

Louisiana has again been dubbed one of the most dangerous states in the nation to ride a bicycle, sparking debate on just why a seemingly innocent exercise seems to carry inordinate risks.

Last week, an analysis by The Wall Street Journal concluded that the state is No. 2 nationally in bicyclist deaths, behind only Florida.

The same review said New Orleans is the sixth most dangerous of 50 metro areas when it comes to bike riding.

The grim review is not the first of its kind.

In 2015, the Center for Disease Control and Prevention said Louisiana had the the third highest rate of bicyclist deaths in the nation, behind Florida and Delaware.

Louisiana has the third-highest rate of bicyclist deaths in the nation, according to a report released Friday by the Centers for Disease Contr…

Doug Moore, president of Bike Baton Rouge, said part of the problem stems from hostility to bike riders by some motorists. "There is an assumption that the roads belong only to cars and trucks," said Moore, a lifelong cyclist.

Moore said he was not surprised the state would be ranked No. 2 in bicycle deaths. "It is pretty consistent with the stuff we have been reading for years," he said.

A total of 93 people statewide died in bicycle accidents since 2015, according to figures compiled by the state Department of Transportation and Development.

The tally includes 11 fatalities each in East Baton Rouge and Orleans parishes and eight in Lafayette Parish. A total of 840 bicyclists nationally were killed in 2016, according to the National Highway Traffic Safety Administration.

Fatalities typically take place between 6 p.m. and 9 p.m., and men are usually the victims, according to the agency. The largest number of men injured were between 55 and 59 years old.

A grand jury indicted a 21-year-old Lafayette man Thursday on reckless operation in the death of Baton Rouge councilman Buddy Amoroso, who was…

Bike safety has sparked discussions since Baton Rouge Metro Councilman Buddy Amoroso was killed in June by a motorist while cycling in West Feliciana Parish, a popular spot for riders because of the rural setting and rolling hills.

In 2012, Nathan Crowson was killed along Perkins Road when he was struck by a suspected drunken driver.

In 2015, award-winning English and linguistics professor Elisabeth Oliver, an avid cyclist, was killed when she was struck by a pickup while walking her crippled bicycle on a rural highway in East Feliciana Parish.

In 2002, LSU professor Steve Seiden and high school student Timothy Cappo were killed while they were riding their bikes on River Road when a truck plowed into a group of cyclists.

How to address the issue has even spilled into the Legislature, where a bill aimed at protecting bike and motorcycle riders was killed in 2016 and is still triggering controversy.

The measure, by state Sen. Gary Smith, D-Norco, would have required jail terms of up to five years for motorists found guilty of an offense that resulted in the death of a cyclist or pedestrian.

Supporters said it was aimed at striking a balance between motorists getting off with a slap on the wrist, like an illegal turn, or facing a far more serious offense after an accidental death, like homicide.

The bill breezed through the Senate 33-1 but died in the House 51-46, seven votes short of the minimum needed for approval.

House opposition was led by state Rep. Kenny Havard, a St. Francisville Republican who is on the Nov. 6 ballot to become president of West Feliciana Parish.

Moore and other cyclists still blame Havard, who was then chairman of the House Transportation Committee, for killing the bill.

Not so, the lawmaker said.

"I am not anti-bicycle," Havard said.

"But I can't have a kid go to school in the morning, hits a constituent of mine and all of a sudden, you are looking at five years in jail," he said.

Havard said roads in his parish are both scenic and dangerous, and sometimes so narrow that motorists have trouble getting around cyclists who, he said, are most often from Baton Rouge and New Orleans.

Lisa Freeman, executive director of the Louisiana Highway Safety Commission, noted bicycle deaths are not unique to Louisiana. "So I think education is probably the biggest piece, to educate people as to what the rules of the road are," Freeman said.

Bike riders enjoy all the rights and duties as car and truck drivers.

Under state law, motorists are supposed to stay at least 3 feet away from a bicycle while passing.

It is also illegal to taunt, harass or maliciously throw objects at cyclists — a periodic problem in New Orleans.

But it is significant that warm-weather states dominate the list of those with the most deaths, said Charles Thomas, a New Orleans attorney and cyclist.

Thomas is Louisiana's representative for Bike Law, a national group of attorneys that advocates for safer roadway usage and represents cyclists who are injured.

Aside from Louisiana and Florida, the states with the most deaths include Arizona, South Carolina, California and Nevada. "If you look at it from that standpoint, I really don't think we are too off base," Thomas said.

"I feel very comfortable riding around New Orleans," he said.

Thomas, like Freeman, said new infrastructure aimed at making cycling more appealing contributes to the volume of cyclists and the rate of injuries.

The Federal Highway Administration has identified Baton Rouge as a city in need of improved safety for bicyclists and pedestrians.

The DOTD is spending $250,000 to finance a bike and pedestrian master plan.

BREC is spending $50,000 for the greenway portion of the outline.

But how to finance any improvements is always a question mark.

Richard said part of the challenge is how Baton Rouge was laid out.

"It is just such an auto-oriented parish," Richard said. "Not many sidewalks, lots of high-speed roadways that are not very accommodating for pedestrians or bikes."

Smith, a cyclist himself, said he is disappointed but not surprised that Louisiana is ranked so high for bicycle deaths.

"It feels like they (motorists) don't always give you the respect you deserve as another legal and lawful user of the road," Smith said. "You can feel the danger out there when you are on a bicycle or a motorbike."

Letter: Bicycle deaths are tragic, but is there no fault in choosing a risky route?

Do cyclists really have a right to ride any road of their choosing or is it their responsibility to consider the dangers of the chosen route?