Gov. John Bel Edwards is urging Congress to keep Medicaid expansion as it edges closer toward a repeal of the federal Affordable Care Act.

More than 374,000 Louisiana residents have enrolled in Medicaid since the expansion took effect in July. Edwards, a Democrat, has often noted his executive order expanding eligibility for the health care program as one of his most significant actions since taking office last January.

"Given its success in Louisiana and across the country, I strongly believe that any health care plan Congress considers must retain expansion to ensure access to coverage for the millions of working Americans who need it most," Edwards wrote in a letter to U.S. House Majority Leader Kevin McCarthy of California, who had requested input from governors.

Bolstered by the elections of Donald Trump as president and GOP-dominated U.S. House and Senate chambers, Republicans have set out to dismantle President Barack Obama's signature health care law, which made expansion possible to cover thousands of mostly working poor Louisiana residents.

Adults who make below 138 percent of the federal poverty level — about $33,500 a year for a family of four or $16,200 for a single adult — are among the newly eligible population.

Against all odds, Louisiana has become the 31st state — perhaps more noteworthy, the first s…

Previously, childless adults were not eligible for Medicaid in Louisiana, and the income restrictions for people with children were tighter.

"Louisiana faces the dual challenges of being a state with some of the highest numbers of low-income working people who also experience the poorest health outcomes in the nation," Edwards wrote in his letter to the GOP leader. "Providing health coverage and access is the first step toward better disease management that will result in a healthier workforce and improve health outcomes for people."

"The evidence is clear that Medicaid expansion has already been life-changing, and life saving, for thousands of Louisianians," he added.

Donald Trump's election creates several uncertainties for Louisiana, but one of the largest …

Stats provided by the Louisiana Department of Health show that among the newly-enrolled population, 58 cases of breast cancer and 45 cases of colon cancer have been detected, with those people now obtaining treatment. Additionally, 47,425 adults have sought preventive care and 852 have been newly-diagnosed with diabetes and are now being treated.

Congress, entering a new term this week, has set out to repeal the federal health care law, commonly referred to as Obamacare, and replace it with health care system that has yet to be fully identified.

In his letter to GOP leaders, Edwards urges them to "make stability a top priority."

"With an issue as important as health care, it is imperative tha we get it right and avoid unintended consequences, even if it takes time," he wrote. "There is just too much at state."

The Washington Times reported last month that the House GOP leaders planned to seek input from the nation's governors as they navigate those efforts.

“Working as a team, with your help and creative ideas, we can achieve our mutual goal of putting patients first,” McCarthy wrote in a letter asking state officials to weigh in by the end of this week.

The Sacramento Bee further reports that the letter extended an invitation to all governors and insurance commissioners from every state to discuss health care ideas with Congressional leaders sometime early this year. 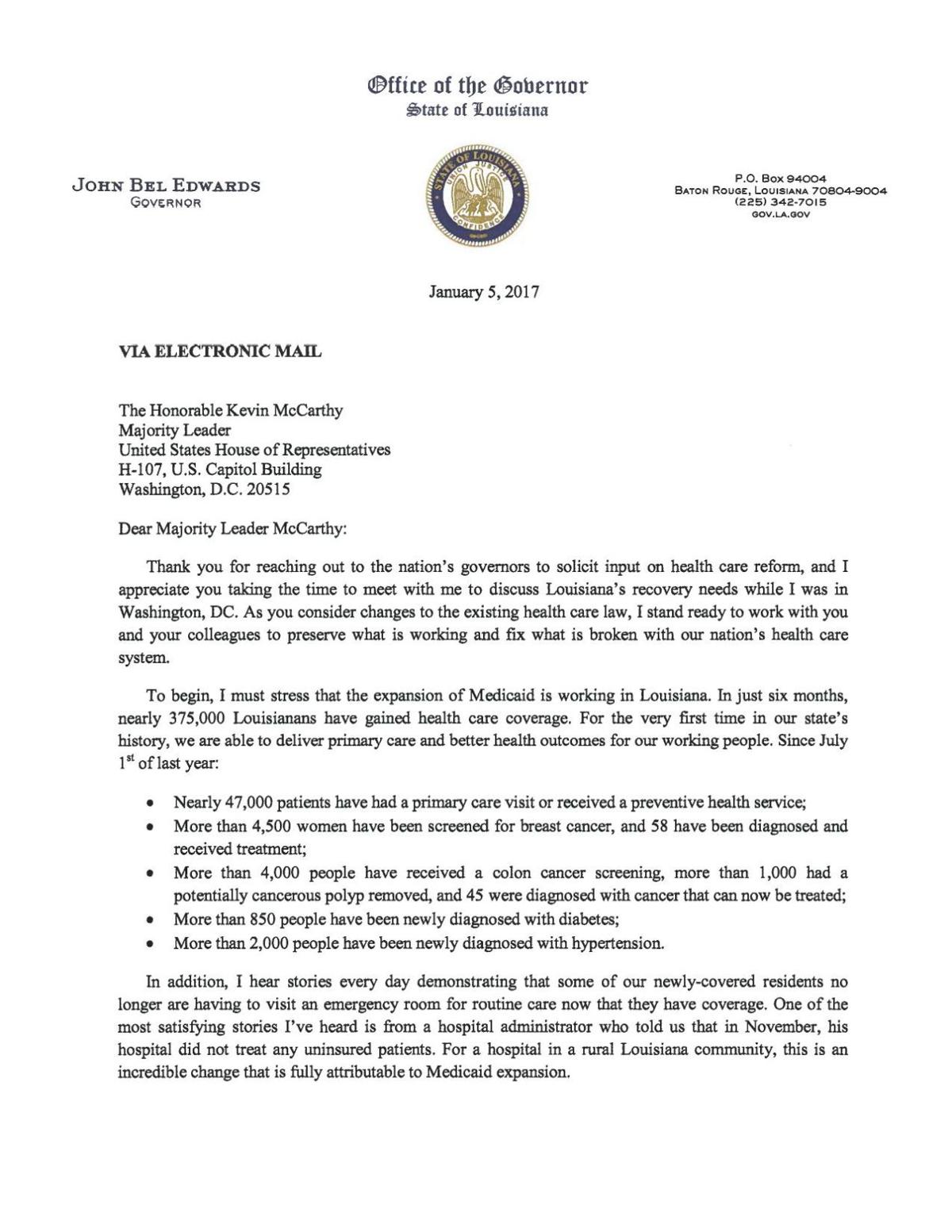 Former Gov. Bobby Jindal has penned a column that puts him at odds with his successor, Gov. John Bel Edwards, over the future of Medicaid expa…

Grace Notes: Bobby Jindal typically tone deaf in attempt to get back into health care debate

One of Democratic Gov. John Bel Edwards' most significant first-year accomplishments was the expansion of Medicaid, which has provided health …

When Gov. John Bel Edwards talks about the Affordable Care Act, and in particular the Medicaid expansion he spearheaded, he makes it intensely…

Louisiana is one of 10 states that have seen the steepest decreases in the rate of uninsured residents over the past four years, according to …

Louisiana's Medicaid expansion enrollment has topped 400,000, as the future of the federal health care law that provides for the program remai…