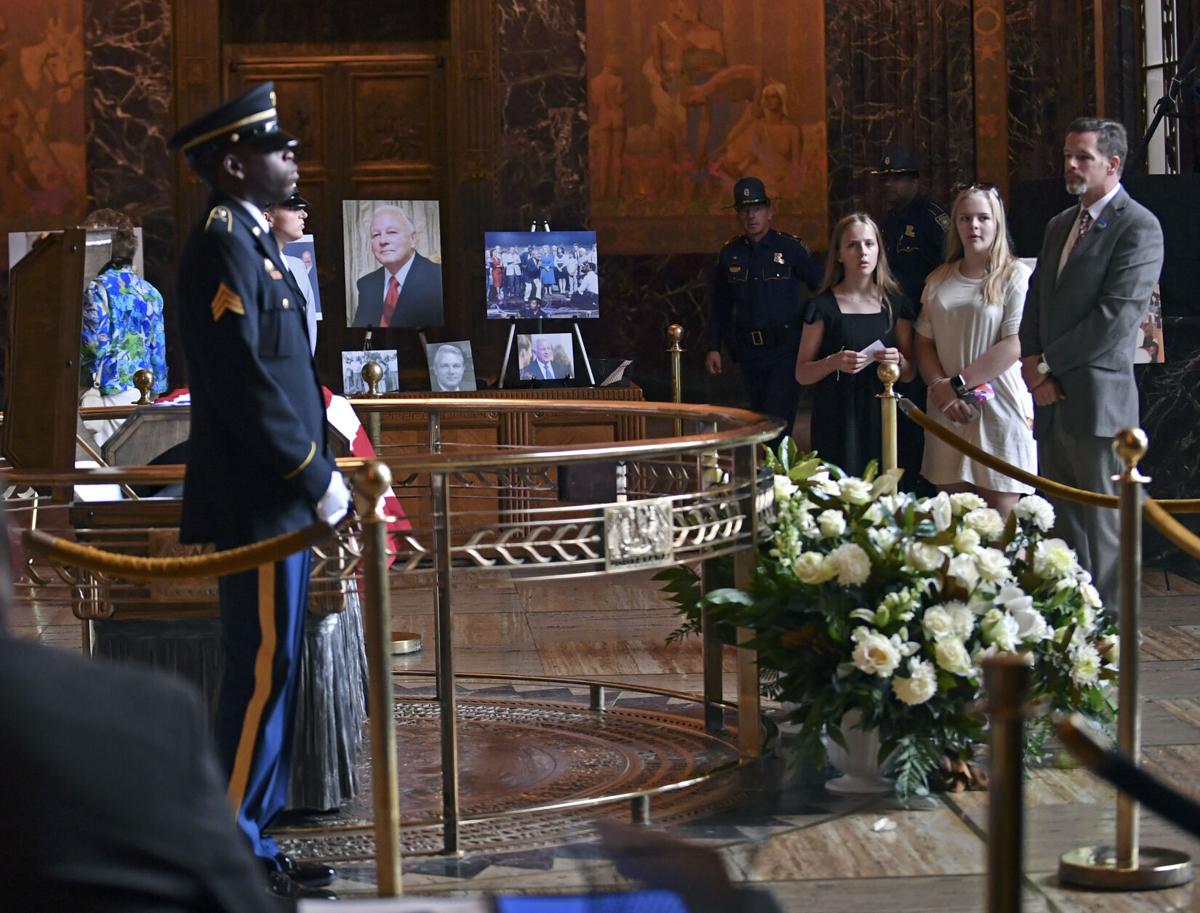 Winfield city councilman Matt Miller, right, and his daughters pay their respects to former Louisiana Governor Edwin Edwards as he lies in honor at the State Capitol, Saturday, July 17, 2021, in Baton Rouge, La. 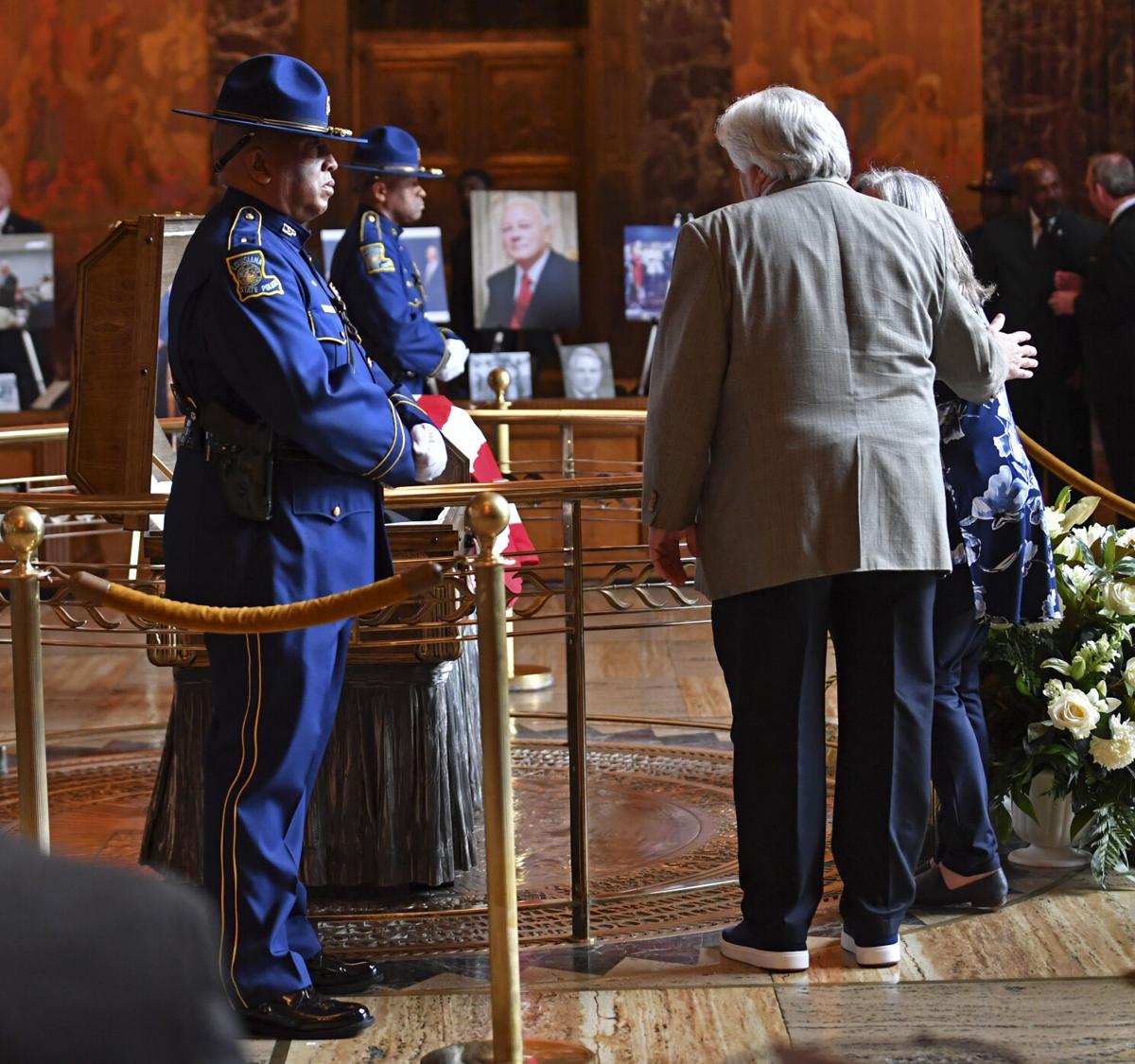 Guests pay their respects to former Louisiana Governor Edwin Edwards as he lies in honor at the State Capitol, Saturday, July 17, 2021, in Baton Rouge, La. 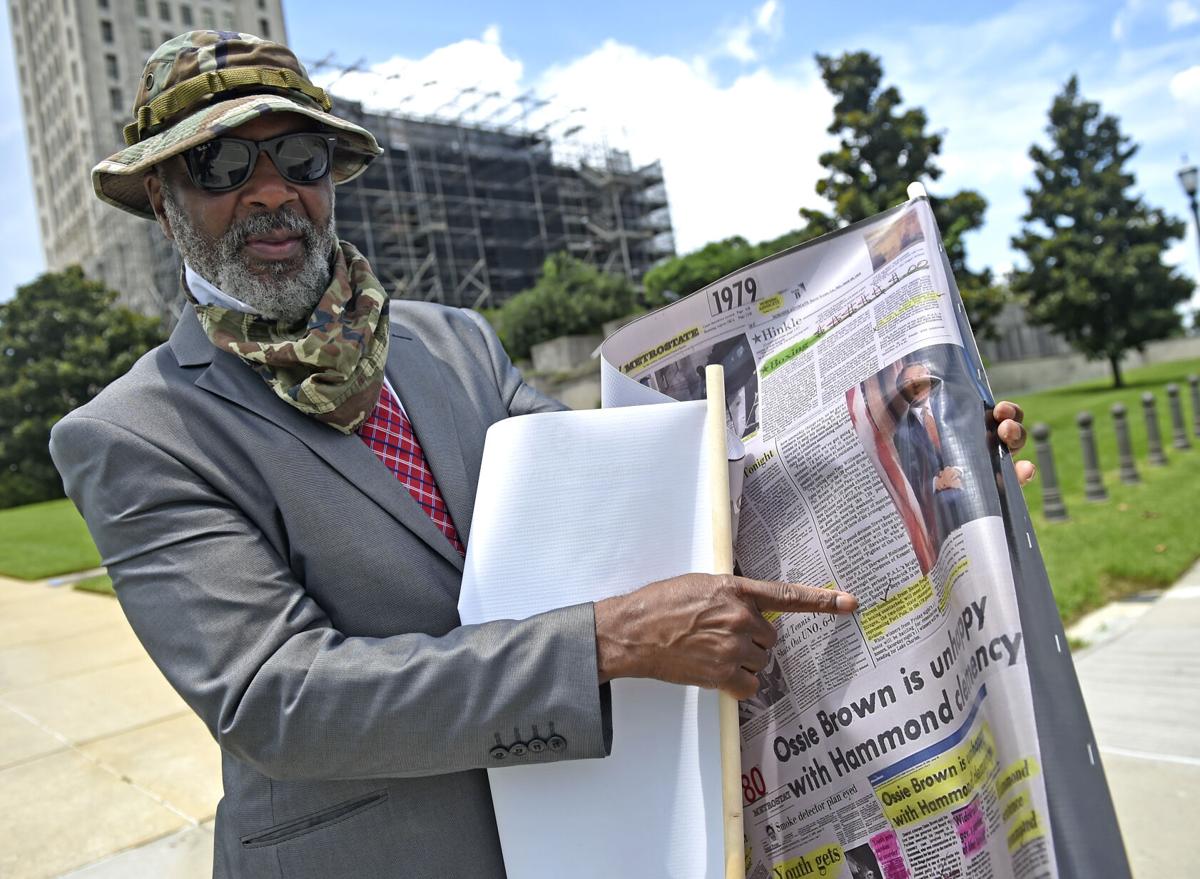 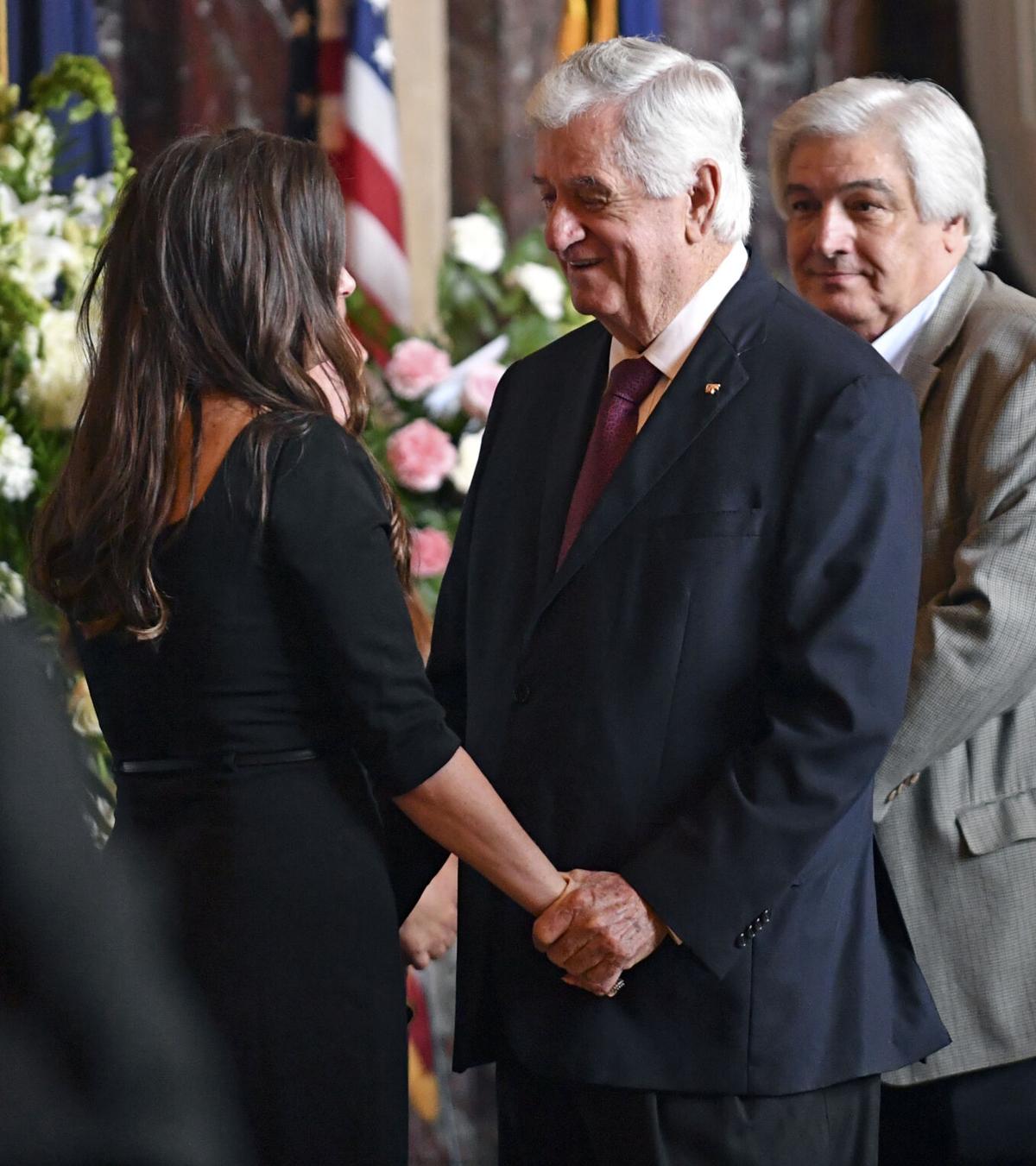 Former President of the Senate and Speaker of the House John Alario, right, speaks with Trina Edwards as he pays his respects as former Louisiana Governor Edwin Edwards lies in honor at the State Capitol, Saturday, July 17, 2021, in Baton Rouge, La. 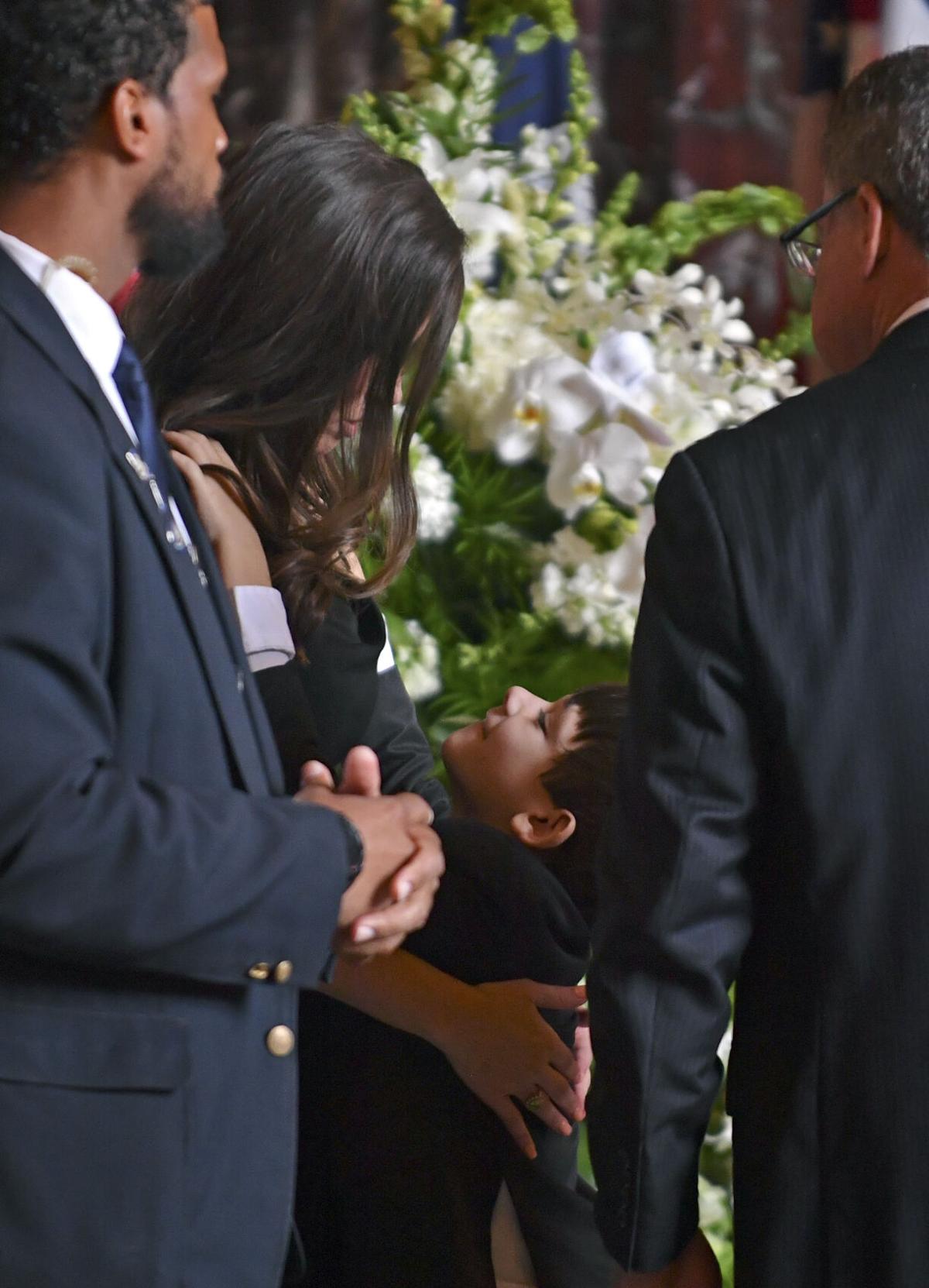 Trina Edwards embraces her son Eli, 7, as guests pay their respects to former Louisiana Governor Edwin Edwards as he lies in honor at the State Capitol, Saturday, July 17, 2021, in Baton Rouge, La. 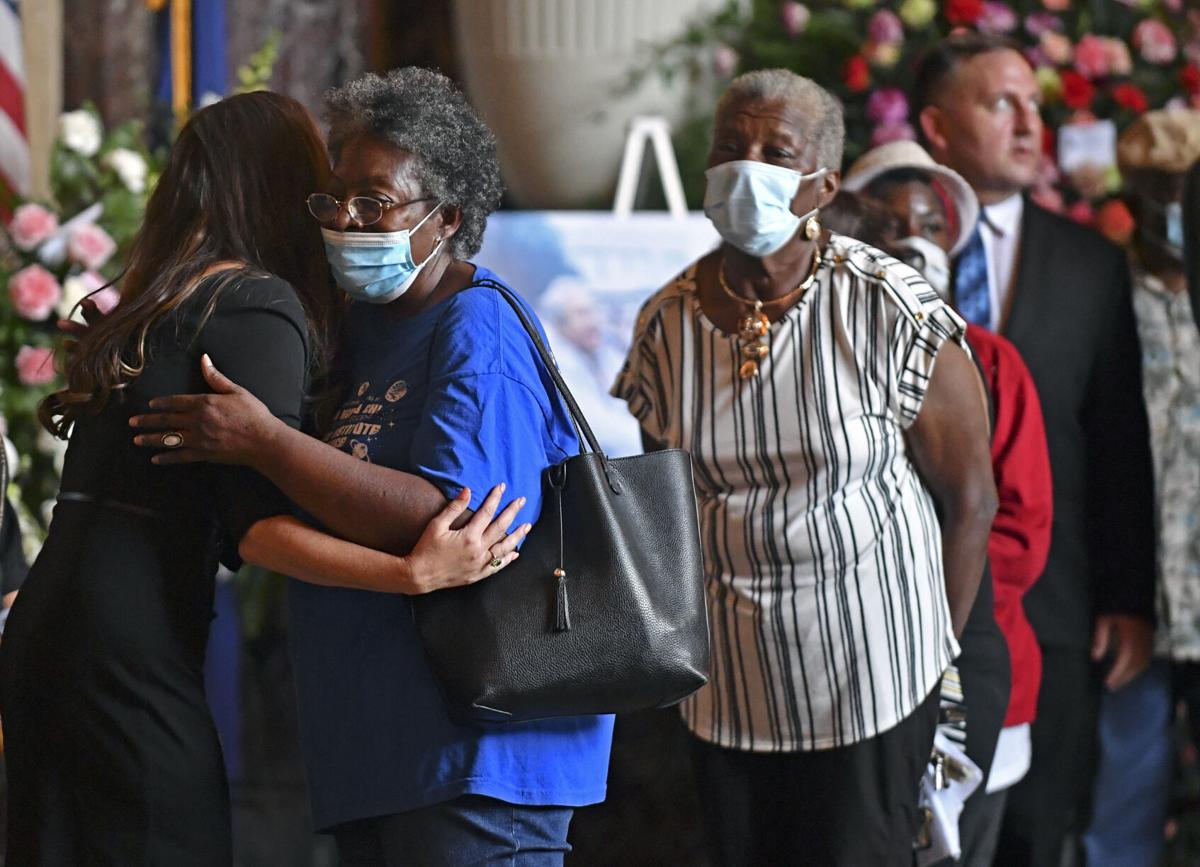 Winfield city councilman Matt Miller, right, and his daughters pay their respects to former Louisiana Governor Edwin Edwards as he lies in honor at the State Capitol, Saturday, July 17, 2021, in Baton Rouge, La.

Guests pay their respects to former Louisiana Governor Edwin Edwards as he lies in honor at the State Capitol, Saturday, July 17, 2021, in Baton Rouge, La.

Former President of the Senate and Speaker of the House John Alario, right, speaks with Trina Edwards as he pays his respects as former Louisiana Governor Edwin Edwards lies in honor at the State Capitol, Saturday, July 17, 2021, in Baton Rouge, La.

Trina Edwards embraces her son Eli, 7, as guests pay their respects to former Louisiana Governor Edwin Edwards as he lies in honor at the State Capitol, Saturday, July 17, 2021, in Baton Rouge, La.

One person remembered him as “a man of the people.”

Another said “he cared for the people.”

Edwin Edwards was “the best governor we ever had,” said Wilfred Naquin, who was first in line and wore an Edwards for Congress t-shirt and a Trump for president ball cap.

Hundreds of people on Saturday paid their respects to Louisiana’s only four-term governor, who laid in state in the center of Memorial Hall on the first floor of the State Capitol from 10 am to 7 p.m.

Well-known for his wit, charm, and devil-may-care approach to both politics and life, many remember former Gov. Edwin Edwards as a character w…

Visitors saw an array of photos of Edwards throughout his life as they circled the half-open casket, with an American flag draped over the lower half.

Edwards, who died on Monday at 93, was lying in a stained plywood casket made, at his request, by inmates at Angola Louisiana State Penitentiary, said Leo Honeycutt, Edwards’ official biographer and a close friend.

“He didn’t want a heavy, bronze casket,” Honeycutt said. “He wanted something that harkened back to his roots as a sharecropper’s son.”

For the first 90 minutes, when there was a steady flow of people, Edwards’ widow Trina greeted visitors while standing in front of a giant photo of Edwards on the day he was inaugurated for a third term on the Capitol steps.

“Hiya, babe,” Stephen said to one old friend, displaying his father’s camaraderie. “Thanks for coming.”

But after the initial rush, visitors for most of the day didn’t have to wait to enter the State Capitol in a development that surprised those who expected throngs of people.

That may have been because Edwards last left office 25 years ago and later served 8½ years in prison on corruption charges, although he found well-wishers wherever he went in Louisiana afterward.

One of them was Richard Larson, a former state employee. He pulled out his cell phone just after leaving the Capitol Saturday to show a photo of him and Edwards looking like the best of friends, although they had just met, at a Mardi Gras parade several years after his 2011 release from prison.

“He had an engaging personality,” said Larson.

Gov. John Bel Edwards was one of the first to pay their respects, but Speaker Clay Schexnayder, R-Gonzales, who oversaw the Capitol arrangements, did not allow the press to see this.

Edwin Edwards had his fingerprints all over the big projects in New Orleans: 'He was the best governor we had'

An agreement for Tom Benson to buy the Saints and keep the football team in New Orleans was suddenly in doubt.

A number of politicians who served with Edwin Edwards showed up, including John Alario, who was twice his speaker of the House, and Robert Adley, a conservative from north Louisiana who frequently jousted with Edwards.

Adley had won election to the state House for the first time when he met Edwards in late 1979, along with other incoming lawmakers. Edwards was on his way out after two terms as governor.

“He called us to dinner and said he’d be back in four years,” Adley remembered. “And sure enough, he was.”

With their political differences – Adley was far more conservative – the two were not close when they served in office at the same time.

But in 2014, Adley offered a roast of Edwards that had the crowd laughing at a fundraiser for the Chennault Aviation and Military Museum in Monroe.

In an email the next day, Edwards told Adley that he had always wondered why his wife Claudia had married him. “But last night, I saw why she did,” Edwards wrote, according to Adley. “We should have been better friends.”

They were close after that, Adley said Saturday and added while standing on the steps of the State Capitol, “Everybody who serves in this building leaves a legacy. He left the biggest legacy of all.”

Marty Chabert, who worked for Edwards during his third term in the mid-1980s and served as a state senator under him during his fourth term a decade later, provided a telling insight into how Edwards operated.

“You met with him for five minutes,” Chabert said, “and then he said yes or no. If it was no, he’d then say, ‘What else can I help you with’”?

LaFreida Theard said she appreciated how Edwards never demeaned state employees, as some governors have done.

“He made us feel valued,” she said and added, “He was a man of integrity, regardless of the criminal charges. We all have our faults.”

Richard Flicker, a management consultant in Baton Rouge, remembered becoming an Edwards supporter during the 1991 governor’s race when he faced off against David Duke, the former Ku Klux Klan grand wizard and anti-Semite who served in the state House.

In a viral bumper sticker, this man summed up Louisiana's 1991 race for governor

'Vote for the Crook: It’s Important' remains one of the cleverest political statements ever

“I went from saying I’d never vote for him to campaigning for him,” Flicker said. “And after he got out of prison, I bought his book. He served his time. His sense of humor was still there. His charisma was still there.”

On Sunday, beginning at noon, Edwards' remains will be moved by horse-drawn carriage and honor guard through the streets of downtown Baton Rouge for a little less than a mile to the Old State Capitol. The Southern University marching band will lead the way.

Edwards' coffin will then be carried up to the old House of Representatives chamber for a funeral service for invited guests and family. Afterward, he will be buried in a private ceremony at Resthaven Gardens of Memory in Baton Rouge.

John Bel Edwards, James Carville, others react to death of Edwin Edwards; 'he always had an elegance'