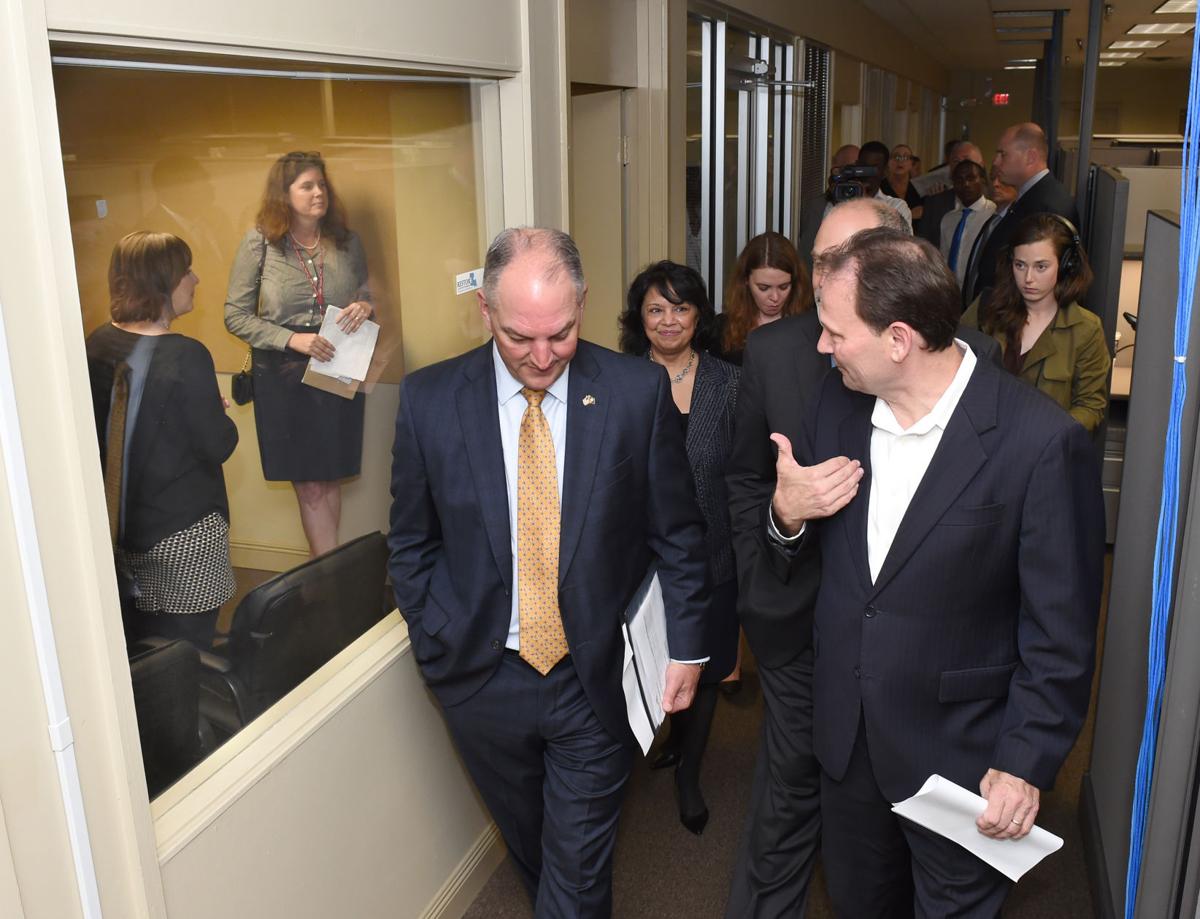 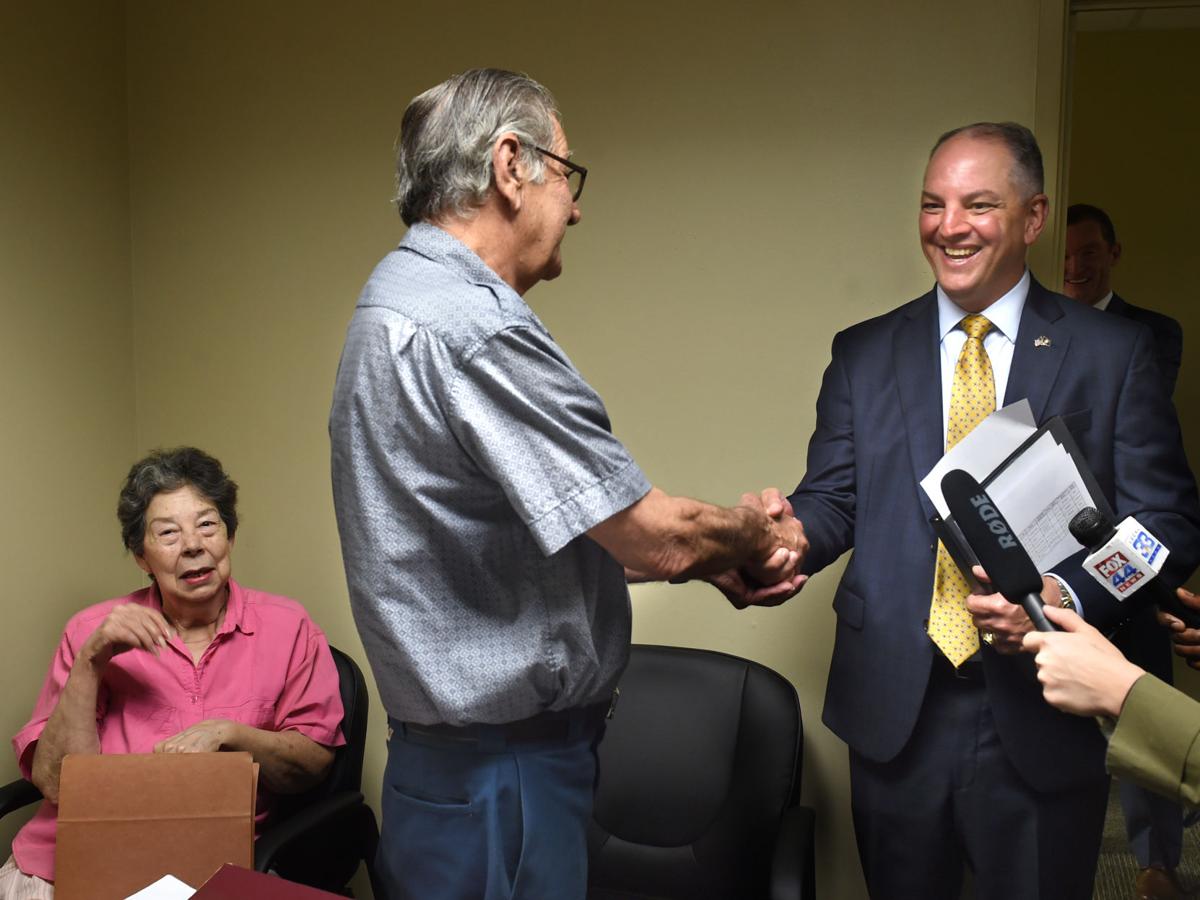 Gov. John Bel Edwards, right, visits with Murphy Latiolais and his wife Joyce, left, while touring the Homeowners Assistance Center at Celtic Media Center Wednesday. Edwards met with homeowners who are participating in the Restore Louisiana Homeowners Assistance Program and got to see a mock structure featuring the very materials mandated for housing construction.

Gov. John Bel Edwards, right, visits with Murphy Latiolais and his wife Joyce, left, while touring the Homeowners Assistance Center at Celtic Media Center Wednesday. Edwards met with homeowners who are participating in the Restore Louisiana Homeowners Assistance Program and got to see a mock structure featuring the very materials mandated for housing construction.

More than nine months after catastrophic floods damaged thousands of homes across south Louisiana, the first signs of the state's major housing recovery efforts are starting to show.

Homeowners began receiving checks on Wednesday to reimburse them for work that's already been done, and a sprawling assistance center has been set up at Celtic Media Centre off of Airline Highway to show off model renovation pieces and offer aid with the application process.

"We still have a lot of folks whose lives are turned upside down," Gov. John Bel Edwards said Wednesday as he reviewed the types of repairs that the Restore Louisiana Homeowner Program will provide for those who qualify.

More than 25,000 people have filled out an initial survey – the first step toward getting assistance through the state's nearly $1.3 billion in federal aid that has been dedicated to homeowner recovery efforts. Additional federal dollars are going toward aiding small businesses, rental housing and agriculture.

Edwards and the state's congressional delegation are seeking additional dollars to expand efforts, but it's likely that more federal funding won't be available until the fall.

Until then, the homeowner recovery programs are being rolled out in phases, beginning with the most vulnerable and needy population. Phase 1, which started with a pilot program this month, was limited to homeowners with low or moderate income who have an elderly or disabled resident living in their home and whose homes outside the floodplain sustained major or severe damage. It will broaden from there.

Murphy and Joyce Latiolais were among the first couples to finalize the extended application process at the assistance center on Wednesday.

"We've been waiting for nine and a half months," Joyce Latiolais, 74, said, a large stack of official documents, including the couple's faded 1967 homestead exemption papers, sitting on the desk in front of her. Gesturing toward them, Murphy Latiolais, 76, notes that they were fortunate to have the documents despite the flood.

The Latiolaises' house off Greenwell Springs Road was severely damaged in the flood. The couple had been in talks with one contractor for a few months, hoping to get work started toward their recovery, but he stopped responding. Now they have a second contractor and are ready to get to work – and just in time to get into the state's program that allows homeowners to select their own contractors, with the state paying for the work directly with the federal funding.

Joyce Latiolais, in particular, is ready to have her say in the new fixtures and finishings.

The recovery programs have two other options: Homeowners who have completed work on their homes already can seek re-imbursement for the costs, and those who are intimidated by selecting their own contractors or have trouble finding one can go through a third option of having a state-selected contractor.

Bernice Galloway, 87, lived in her Warren Drive home for at least 30 years. Edwards personally notified her that she had been approved to be reimbursed for $40,000 in repairs to her home.

"With this, hopefully you will now be made whole," Edwards said.

More than 6,000 environmental reviews have been completed on homes that still need work done, a crucial step mandated by federal law, that under the system set up, comes between the initial survey and the full application.

"We still need people to take the survey," Edwards said.

The initial survey, which can be accessed via restore.la.gov and must be completed for homeowners to begin the process, is separate from Federal Emergency Management Agency forms that people have filled out following the floods.

Jeff Haley, the state director of the Homeowner Assistance Program, said that many of the applicants to date have sought reimbursements or state assistance for contractors that the homeowners have selected on their own.

He said he expects that more people will select the state-run contractor option as the program continues to ramp up.

"We wanted to create flexibility in the program to meet people where they are in the recovery," he said. "A lot of people want control."

Here's how Louisiana programs aim to rebuild thousands of flooded rentals, get owners 'over the goal line'

Louisiana landlords with rental houses walloped by 2005's Hurricanes Katrina and Rita were eventually promised state help to rebuild: If they …

U.S. Senator Bill Cassidy pleaded with flood-affected constituents at a pair of town hall meetings Friday to fill out the state's relief surve…

People who live in areas affected by last year's catastrophic floods are being urged on television and radio, by billboards and at community e…

Lillie Gumm is about two weeks away from moving back into her house that took on three feet of water during last year's historic floods.