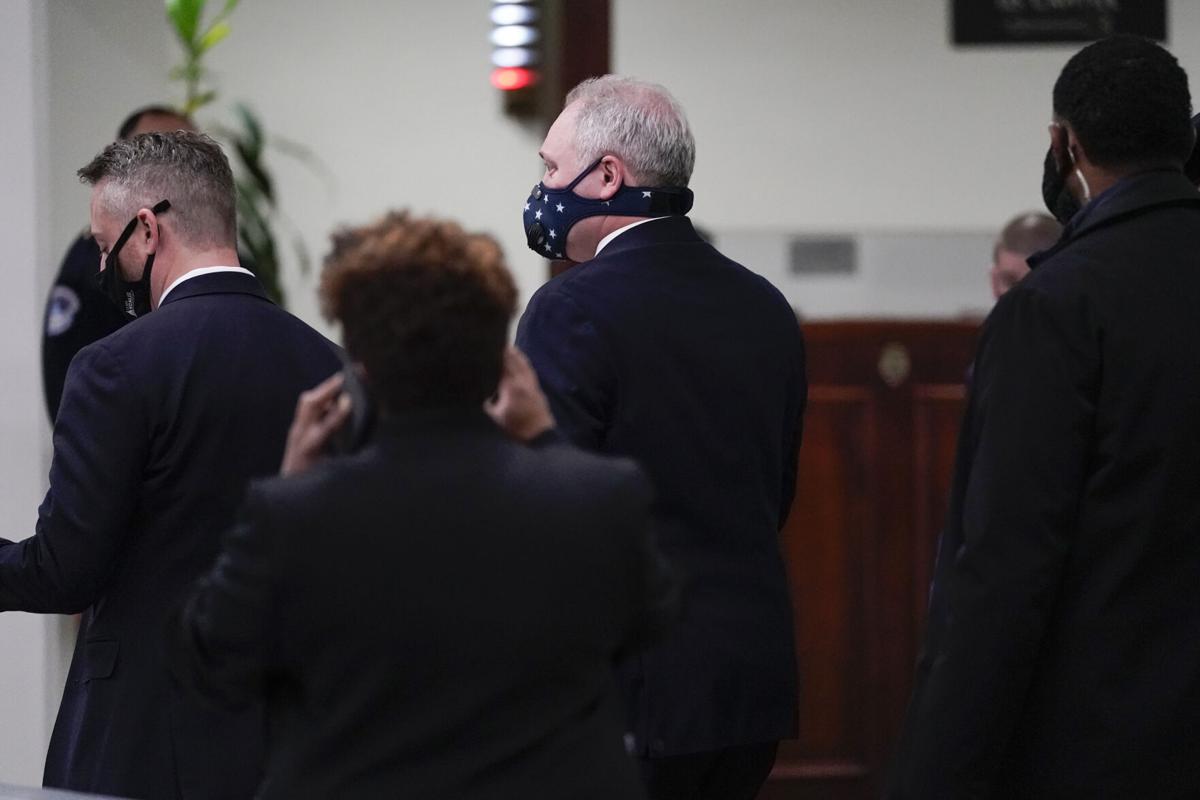 House Minority Whip Rep. Steve Scalise, R-La., walks from a House office building back toward the U.S. Capitol to reconvene a joint session of the House and Senate to confirm the electoral votes cast in November's election, at the Capitol, Jan. 6, after protesters stormed the Capitol. 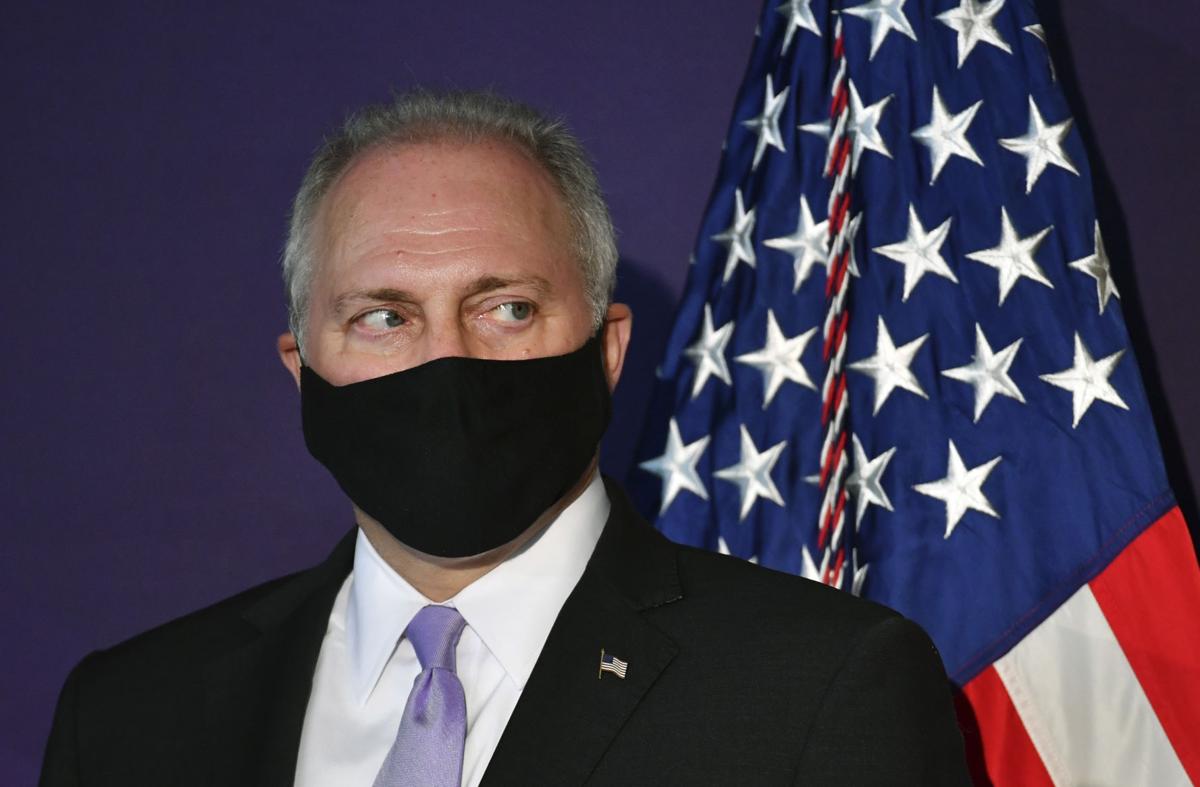 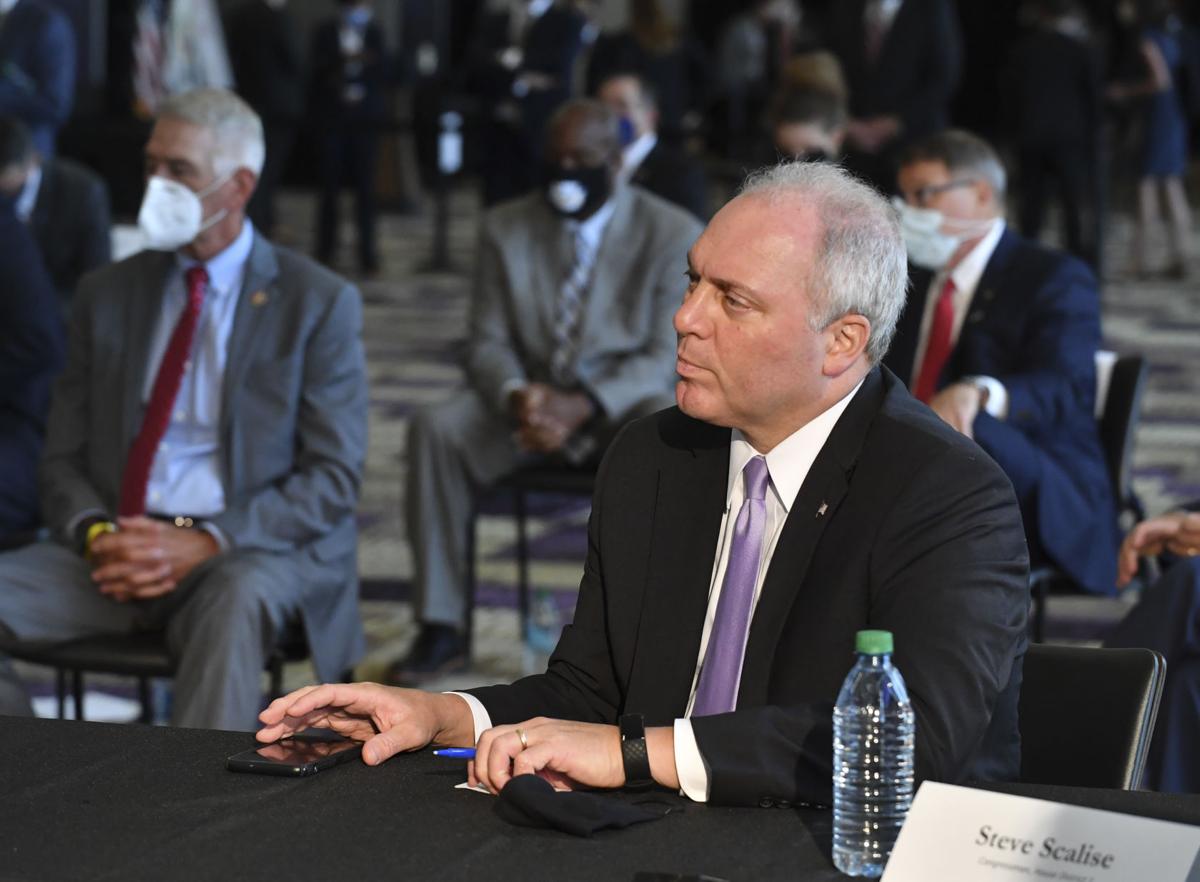 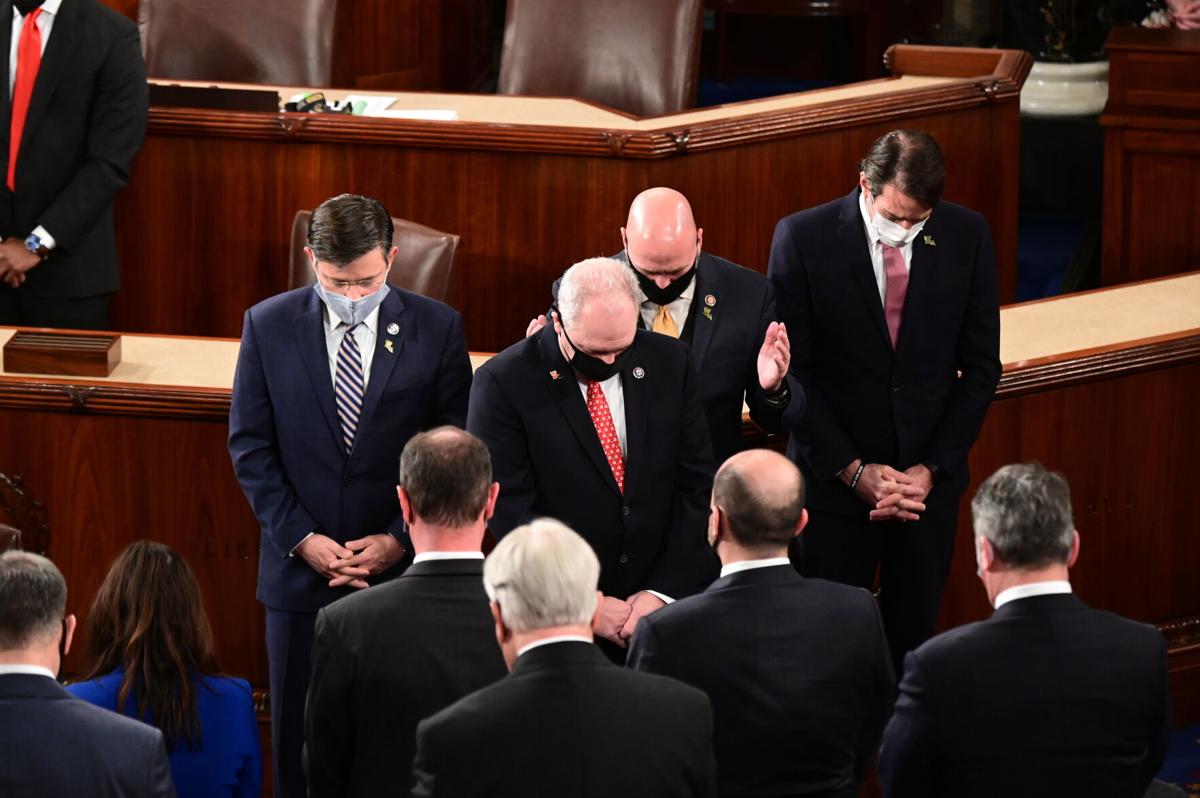 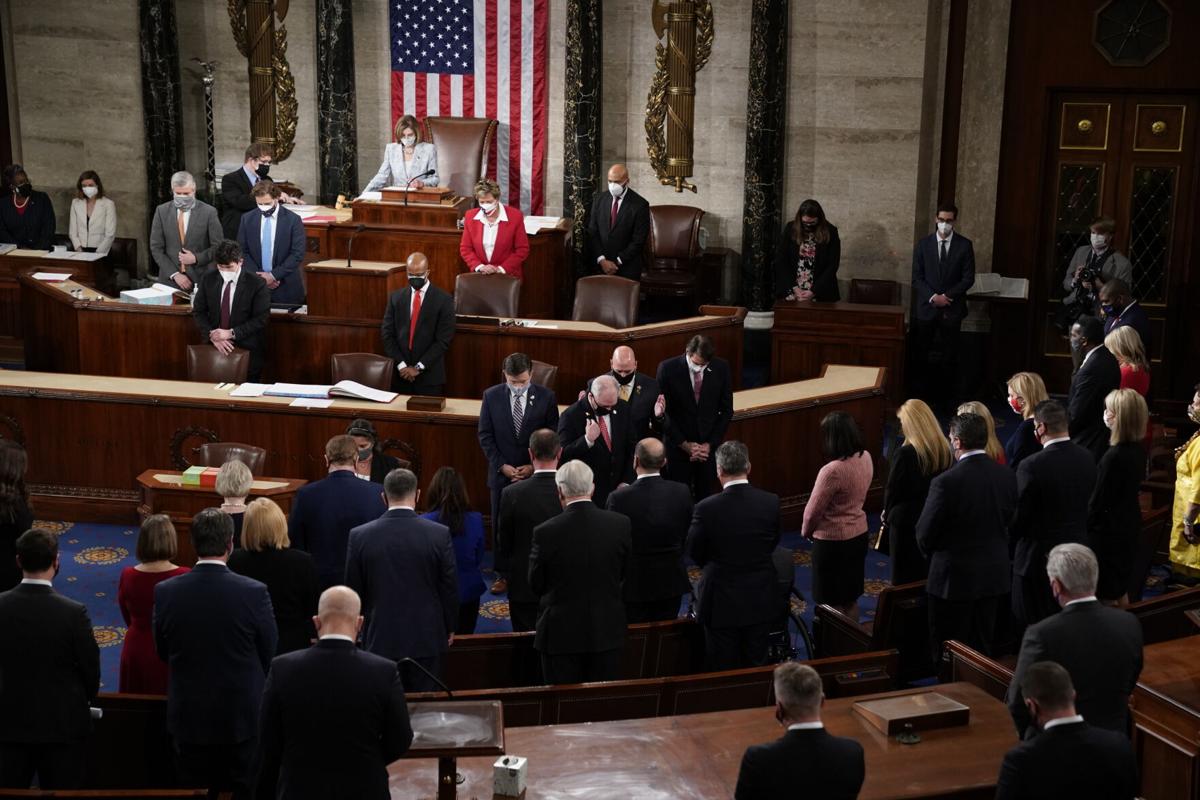 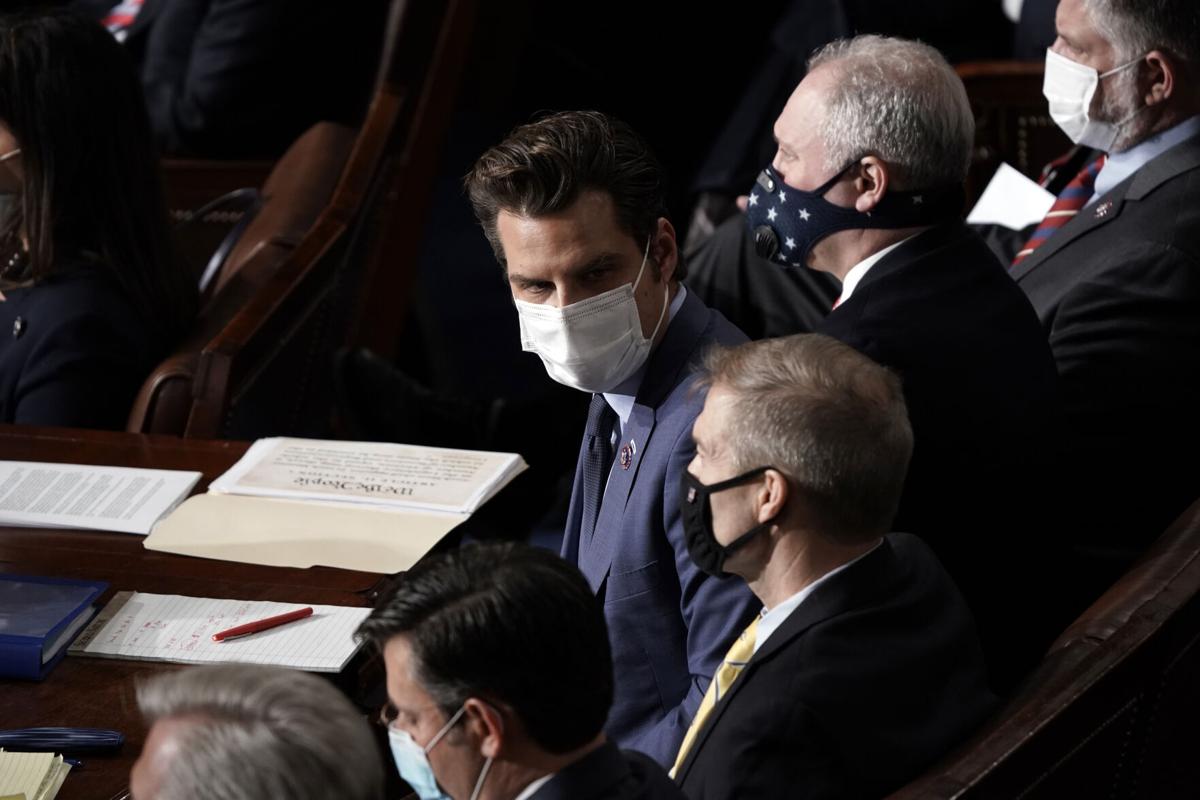 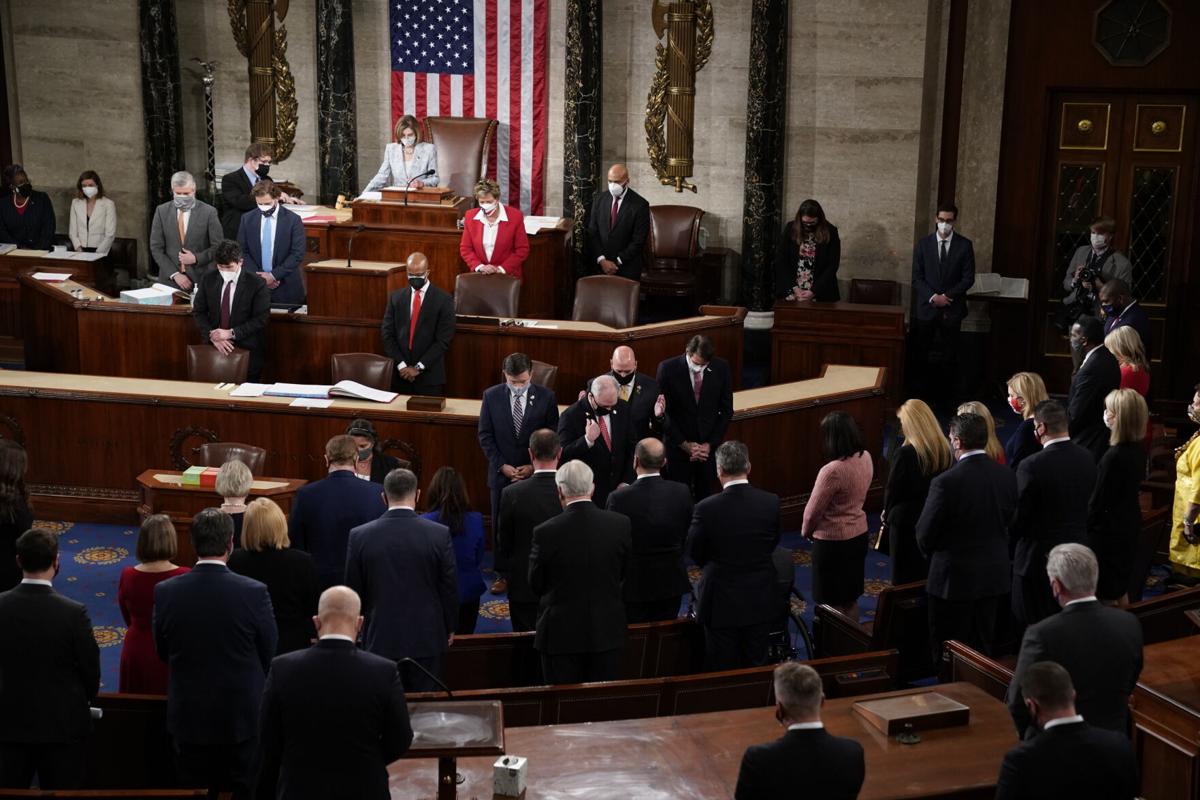 Republican members of the House of Representatives from Louisiana, including Rep. Mike Johnson, House Minority Whip Steve Scalise, Rep. Clay Higgins and Rep. Garret Graves lead the House in a moment of silence for Louisiana Rep-elect Luke Letlow, who died from COVID-19, at the U.S. Capitol in Washington, Sunday, Jan. 3, 2021. (Erin Scott/Pool via AP) ORG XMIT: WAS434

House Minority Whip Rep. Steve Scalise, R-La., walks from a House office building back toward the U.S. Capitol to reconvene a joint session of the House and Senate to confirm the electoral votes cast in November's election, at the Capitol, Jan. 6, after protesters stormed the Capitol.

Republican members of the House of Representatives from Louisiana, including Rep. Mike Johnson, House Minority Whip Steve Scalise, Rep. Clay Higgins and Rep. Garret Graves lead the House in a moment of silence for Louisiana Rep-elect Luke Letlow, who died from COVID-19, at the U.S. Capitol in Washington, Sunday, Jan. 3, 2021. (Erin Scott/Pool via AP) ORG XMIT: WAS434

As a mob of rioters descended Jan. 6 upon the U.S. Capitol, Congressman Steve Scalise was making his way through a maze of tunnels.

Scalise, a Republican from Jefferson and the minority whip for the U.S. House of Representatives, was among the earliest elected officials to be whisked away from the Capitol as supporters of President Donald Trump broke into the building, smashing windows, breaking into congressional offices and leaving a trail of destruction. The chaos began shortly after Scalise gave a speech Wednesday urging his fellow House members not to certify the election results from Arizona, which cast its 11 electoral votes for President-elect Joe Biden.

5 of 6 Republican lawmakers from Louisiana sided with Trump. Here's how they voted on the election results

Scalise’s Capitol Police security detail approached him and told him that it was time to go.

On his way out, Scalise looked down at the podium where House Speaker Nancy Pelosi, a California Democrat, normally presided. In her place was U.S. Rep. Jim McGovern of Massachusetts — a sure sign something was amiss.

Scalise and two other members of Louisiana’s seven-member delegation — U.S. Sen. Bill Cassidy and Rep. Garret Graves, both Baton Rouge Republicans — all spoke to The Advocate | Times-Picayune on Thursday, recounting what happened after they got the news that rioters had breached the Capitol as Congress mulled a challenge to the Nov. 3 election.

Cassidy was struck by the magnitude of the moment.

“I was thinking to myself, if a foreign country entered the Capitol while we’re trying to have a peaceful transfer of power and the police were barricading glass doors, it would be an act of war,” Cassidy said.

Cassidy said he was taking notes and looking down at his desk when he got a hint that something was going wrong. He heard Sen. Mitt Romney, a Utah Republican, walk by, muttering about security and clearly disturbed. Cassidy looked up, and Vice President Mike Pence, who had been presiding over the chamber, was gone.

A flurry broke out, and the sergeant-at-arms told everyone to stay in place. Staffers from other parts of the Capitol entered the chamber, thinking it was a more secure location.

Graves said he had been looking out of the Capitol’s windows as he watched the debate unfold from the gallery, and that he saw the demonstrators growing increasingly agitated. But he said it was still hard to believe they had descended upon the Capitol and forced their way in as security was locking up doors. Soon, the rioters’ chants echoed through the halls.

“It got to the point where the doors that the president walks through for the State of the Union, they started rattling the doors,” Graves said. “It was pretty surreal.”

Cassidy said he and U.S. Sen. Ted Cruz of Texas — one of the leaders of the challenge to the election results — sat near each other, passing back and forth images on their phones. But that didn’t last long.

“They announced protesters were overwhelming the Capitol Police and we needed to evacuate,” Cassidy said.

Our Views: The cowards of the Congress, right up to Steve Scalise, fuel a fiasco in Capitol

History may be kinder to Donald Trump as president of the United States than we can today imagine but that’s a long way away. Today, nothing i…

“I was just like, ‘OK, let’s bring it on,’” he added. “I’m a doctor and so my training, if you’re in the ICU at 3 a.m. and someone’s vomiting blood and not going to live, you don’t get nervous, you don’t get afraid, you get focused. And I was angry. So I was angry and focused.”

Both Cassidy and Graves eventually made their way back to their offices. By that point, law enforcement had flooded the Capitol and confirmed it was safe for them to return.

But while Cassidy and Graves were still inside the building, Scalise was long gone, because of his rank as the House’s No. 2 Republican. He and other members of U.S. House and Senate leadership had been ushered to an undisclosed location.

Trump supporters try to break through a police barrier, Wednesday, Jan. 6, 2021, at the Capitol in Washington. As Congress prepares to affirm …

“We started talking amongst ourselves and with the Secretary of Defense about retaking the Capitol,” Scalise said. “This way, we could push back against the anarchists and terrorists who had taken the Capitol.”

Scalise, who was shot and seriously wounded in 2017 during a practice for the annual congressional baseball game between Democrats and Republicans, said that Wednesday “definitely brought back some of those emotions.” But he also said that everyone was focused on addressing the security breaches; they were especially concerned after seeing photos of rioters inside the Senate chambers.

“We were all very adamant, Republican and Democrat leaders, that we had to get back to the Capitol and continue our work that day,” Scalise said. “We could not let anarchists take over America’s democracy.”

When Congress was able to reconvene later Wednesday evening, members got back to the question of certifying the election. Cassidy was the only Republican member of Louisiana’s delegation who voted to accept every state’s votes.