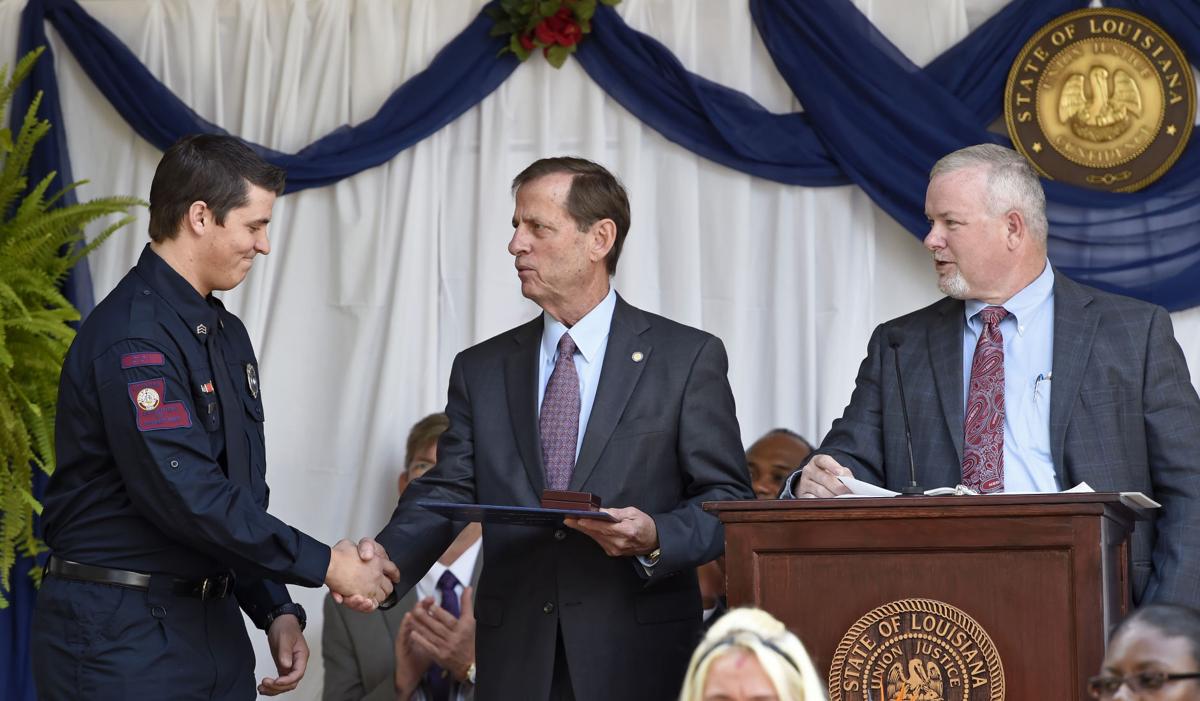 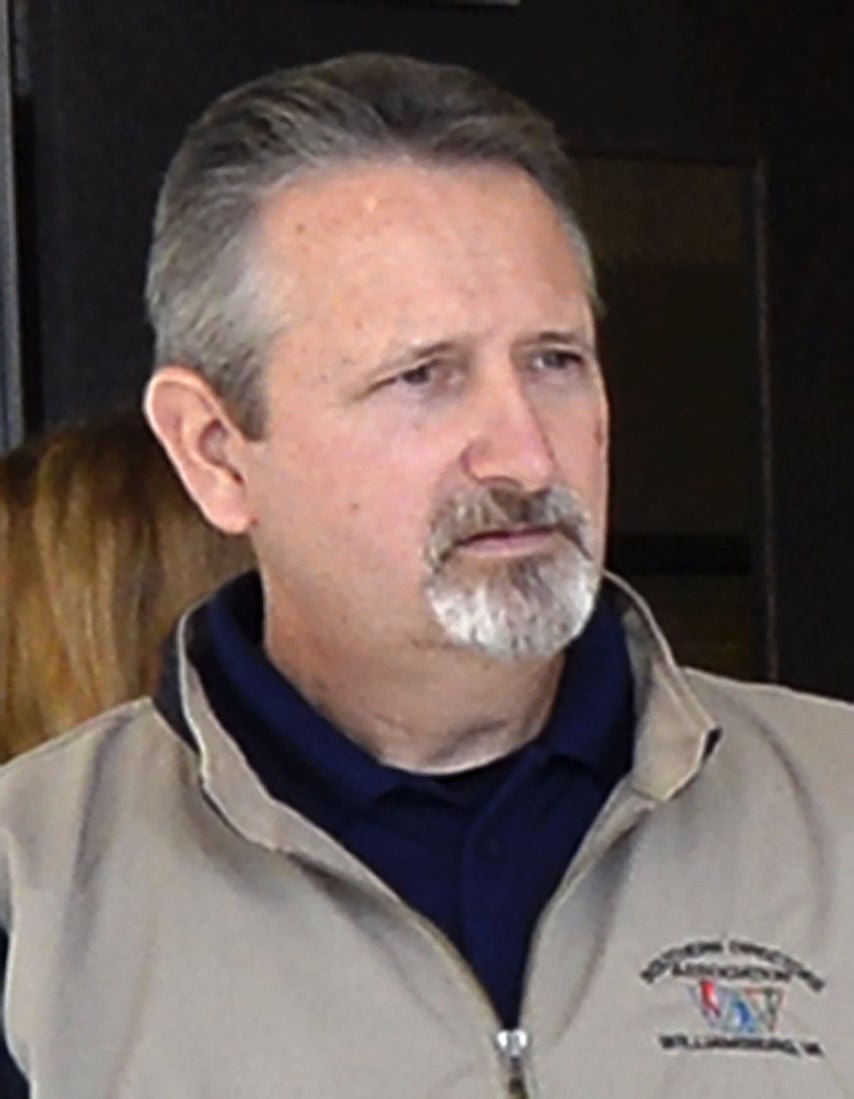 Gary Shotwell, a former official in the corrections department, talks about the renovation of "Building 10" on Mayflower Street in downtown Baton Rouge, which Shotwell oversaw. Shotwell used to work as a deputy warden at Dixon Correctional Institute when corrections secretary Jimmy LeBlanc was warden there; he also did some work on LeBlanc's private home. Most of the Building 10 job was not competitively bid, including the project oversight, an approach corrections officials have said is permissible. Shotwell said corrections officials approached him to see if he'd be interested in the work.

Gary Shotwell, a former official in the corrections department, talks about the renovation of "Building 10" on Mayflower Street in downtown Baton Rouge, which Shotwell oversaw. Shotwell used to work as a deputy warden at Dixon Correctional Institute when corrections secretary Jimmy LeBlanc was warden there; he also did some work on LeBlanc's private home. Most of the Building 10 job was not competitively bid, including the project oversight, an approach corrections officials have said is permissible. Shotwell said corrections officials approached him to see if he'd be interested in the work.

It must have seemed like it was meant to be: Louisiana corrections officials needed new offices for their employee credit union and for Prison Enterprises, a branch of the corrections department that puts inmates to work making everything from clothing to food.

Right next door to corrections headquarters in downtown Baton Rouge was an old, vacant red-brick building, the former home of the Police Department, which is owned by the state and was badly in need of a makeover.

So began the Building 10 renovation, now nearly complete, with a price tag of $6.9 million. Showing off the result to reporters last month, corrections officials noted proudly that it was a relative bargain, thanks largely to the use of inmate labor.

But inmates – who make at most 20 cents an hour -- didn’t do all of the work. While architects and project managers for public jobs are often chosen through a competitive selection process, that wasn't done in this case, and lucrative chunks of the job were instead simply awarded to two allies of corrections head Jimmy LeBlanc.

All the design work was done by GraceHebert Architects, a large and well-known Baton Rouge firm whose president, Jerry Hebert, is married to LeBlanc’s niece. Hebert's son-in-law, Joe Buttross, is also a key official at Prison Enterprises. There was no solicitation process for the job, which has earned GraceHebert more than a half-million dollars so far. By law, corrections officials say, they weren't required to do one.

And the construction is being overseen by Gary Shotwell, a retired prison official who was LeBlanc’s right-hand man for years when LeBlanc was warden of Dixon Correctional Institute in Jackson. Shotwell, who was hired after corrections officials approached him about the Building 10 job, has made nearly $200,000 so far. He also did work on LeBlanc’s private home when the two were at Dixon.

Shotwell’s work on Building 10 – which largely involves overseeing inmate laborers -- wasn’t the only portion of the job awarded without competition, though public building projects must normally follow a strict bid process. The purchase of materials, for instance, was not subject to bid.

Jenifer Schaye, general counsel for the state legislative auditor, said her review of state law indicates that correctional projects must be bid publicly if their total cost is greater than $200,000.

Corrections officials disagree strongly with Schaye’s interpretation, saying the state law cited by Schaye applies only to new construction, and that it specifically exempts renovations from the $200,000 threshold.

The state ethics code, meanwhile, bars people or companies they own from getting contracts with an agency that employs a close relative.

LeBlanc, whose niece is married to Hebert, is not considered a member of Hebert’s “immediate family” under state law, but Buttross is.

Buttross is Hebert’s son-in-law and a top official at Prison Enterprises, the arm of the corrections department that will occupy the building along with the credit union.

Corrections officials say there is no conflict. So does Hebert, who claims his client in this case is neither the corrections department nor Prison Enterprises, but a public entity called the Louisiana Correctional Facilities Corp. That entity, whose five board members are appointed by the governor and include LeBlanc, issues bonds to help pay for corrections-related projects, among them Building 10.

That could prove a sticky question. The checks GraceHebert receives come from LCFC, but the firm’s invoices are all addressed to Prison Enterprises. Prison Enterprises officials, including Buttross and his boss, agency director Michael Moore, have attended several of LCFC’s quarterly meetings to explain the project. Prison Enterprises also pays the inmates’ wages.

Regardless of who is seen as GraceHebert’s client in the Building 10 work, the architectural firm has a separate contract signed by a Prison Enterprises official that is worth a maximum of $60,000 a year, records show.

Corrections officials say that the "agency" that GraceHebert is actually contracting with is Department of Public Safety and Corrections, Corrections Services -- not Prison Enterprises, which is a distinct subset of the department. They said ethics laws only apply narrowly to the specific division of the department that has the contract.

The Prison Enterprises official's signature on the deal -- which accompanies the signature of Hebert and Thomas Bickham, the department's undersecretary -- was "purely administrative," they said.

Hebert, meanwhile, said by email that that contract was “entirely appropriate” because “neither Joe (Buttross) nor anyone directly reporting to Joe signed the contract.”

In a later message, Hebert said he had hired an attorney with expertise in ethics, who said this separate contract violated no law in part because the original deal was awarded before Buttross went to work for the department. The current contract, signed in 2014, is a renewal, Hebert said. He did not name the attorney who advised him.

Crooked vendor of drug tests, convicted in Mississippi, did business with Louisiana prisons

How, precisely, GraceHebert landed the Building 10 gig is a bit of a mystery. Hebert referred questions on that point to Bickham.

Bickham said the credit union, which is private, was initially planning to move into Building 10 by itself, and that its board – which is not required to seek bids or proposals -- chose GraceHebert for the work.

When corrections officials later decided to move Prison Enterprises there as well, Bickham said, they opted to stick with GraceHebert because the firm was already working on the site.

It is difficult to determine how the credit union – whose 21-member board is largely comprised of current and former corrections officials, including LeBlanc and Bickham – chose the architect for the Building 10 project in the first place.

Burl Cain, president of the credit union’s board and the former warden of the Louisiana State Penitentiary at Angola, said in an interview that the board voted in July 2013 to explore a renovation of the building. Then, in August 2014, minutes show the board voted to pay GraceHebert’s outstanding invoices as well as future ones, Cain said.

But Cain could not recall the board signing a contract with GraceHebert. He said it appeared to him that the credit union’s chief executive had hired the firm, “because there are no board documents showing how we engaged him.”

Ellen Dunn, the credit union’s chief executive, did not return calls from The Advocate.

Shotwell, likewise, says he wasn't required to submit any type of proposal to get the job of project manager in part because – even though he is overseeing the entire project -- his paychecks all come from the credit union, which is private. Corrections officials say he is currently an employee of the credit union.

Shotwell said he was originally contacted about the work by Billy Breland, who oversees facilities for the corrections department and is also on the credit union's buildings committee.

"They just approached me and asked me if I would be interested in being a project manager," said Shotwell.

Shotwell, who is making $10,000 a month to oversee the job, has earned more than $180,000 on the job to date. He’s earning 27 percent more than he made as an assistant warden at Dixon Correctional Institute.

Shotwell says he’s ideally qualified to supervise the Building 10 project, given his experience as a prison guard and in construction work. Overseeing the project demands not only construction experience but an ability to manage dozens of prisoners scattered all over the job site. He said there are hazards in having so many inmates at a job site in the middle of a neighborhood, noting that he'd already confiscated contraband including cocaine, marijuana and cell phones from inmates.

Shotwell stressed that LeBlanc – who as warden at Dixon was his supervisor for years – had no role in his hiring. LeBlanc echoed that view.

Shotwell acknowledged that years ago, he “consulted on” various projects around LeBlanc's personal house near Jackson, such as advising on fixing a ceiling fan, and hiring laborers for a project involving turning LeBlanc's carport into indoor space.

But the relationship was no different from the courtesy he'd extend to another colleague or friend, he said.

"I didn't treat him any different than anyone else," Shotwell said. "I can say this, anything that we did was on the up and up."

LeBlanc, who recently sold the house in Jackson, likewise said he had no involvement in Shotwell’s hiring for the Building 10 project.

And he characterized Shotwell’s private work for him as minimal, saying the former assistant warden once helped him “fix a toilet,” and that he helped him find subcontractors for the carport job.

LeBlanc stressed that he paid Shotwell for his supervisory work, and said Shotwell did it on his off hours.

He said he did not remember how much he paid Shotwell for the work, which he said took place in 2005.

The employees have so much to be proud of at the Louisiana Department of Public Safety and Corrections. Not only do we work each day on mainta…

When Joe Buttross was selected to fill an assistant warden position at Elayn Hunt Correctional Center in St. Gabriel a couple years ago, he ha…