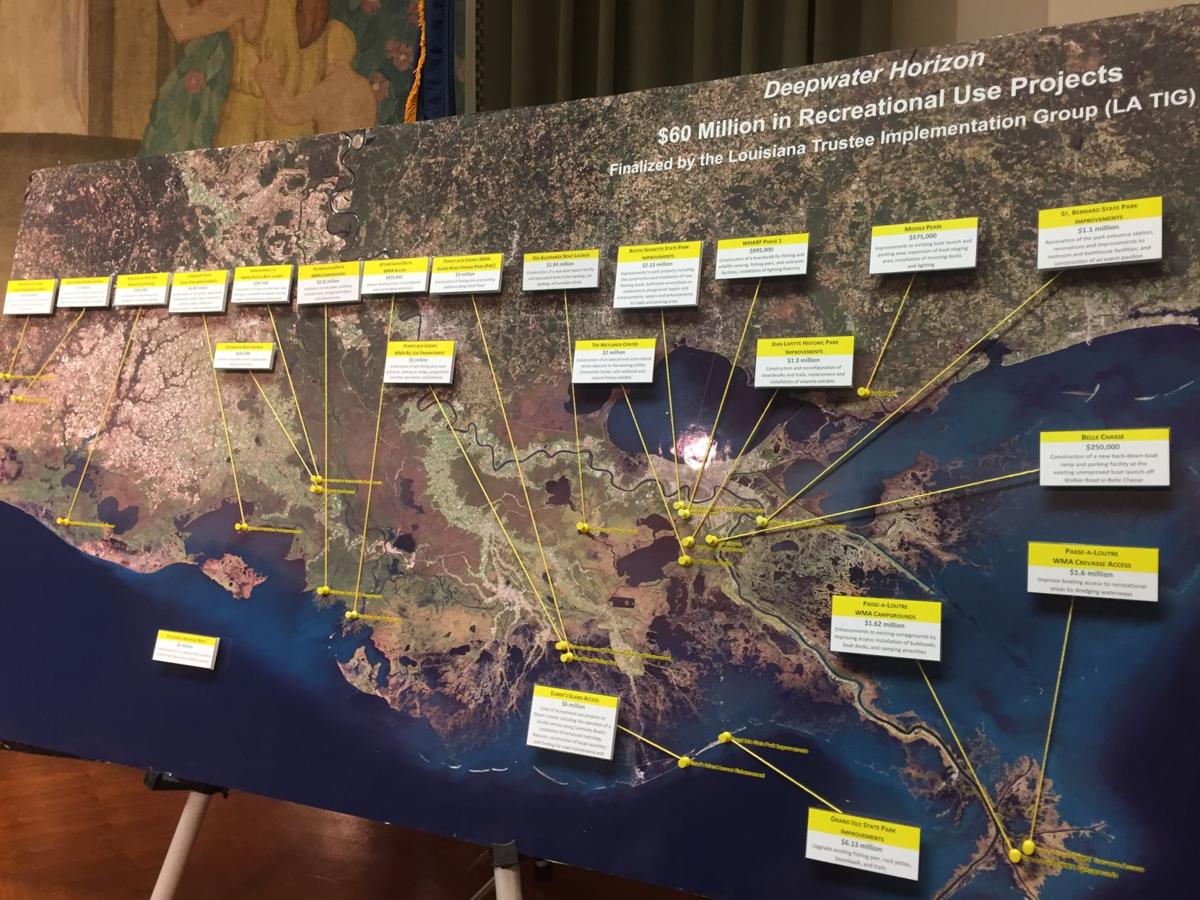 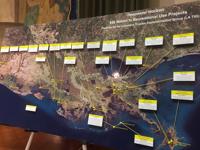 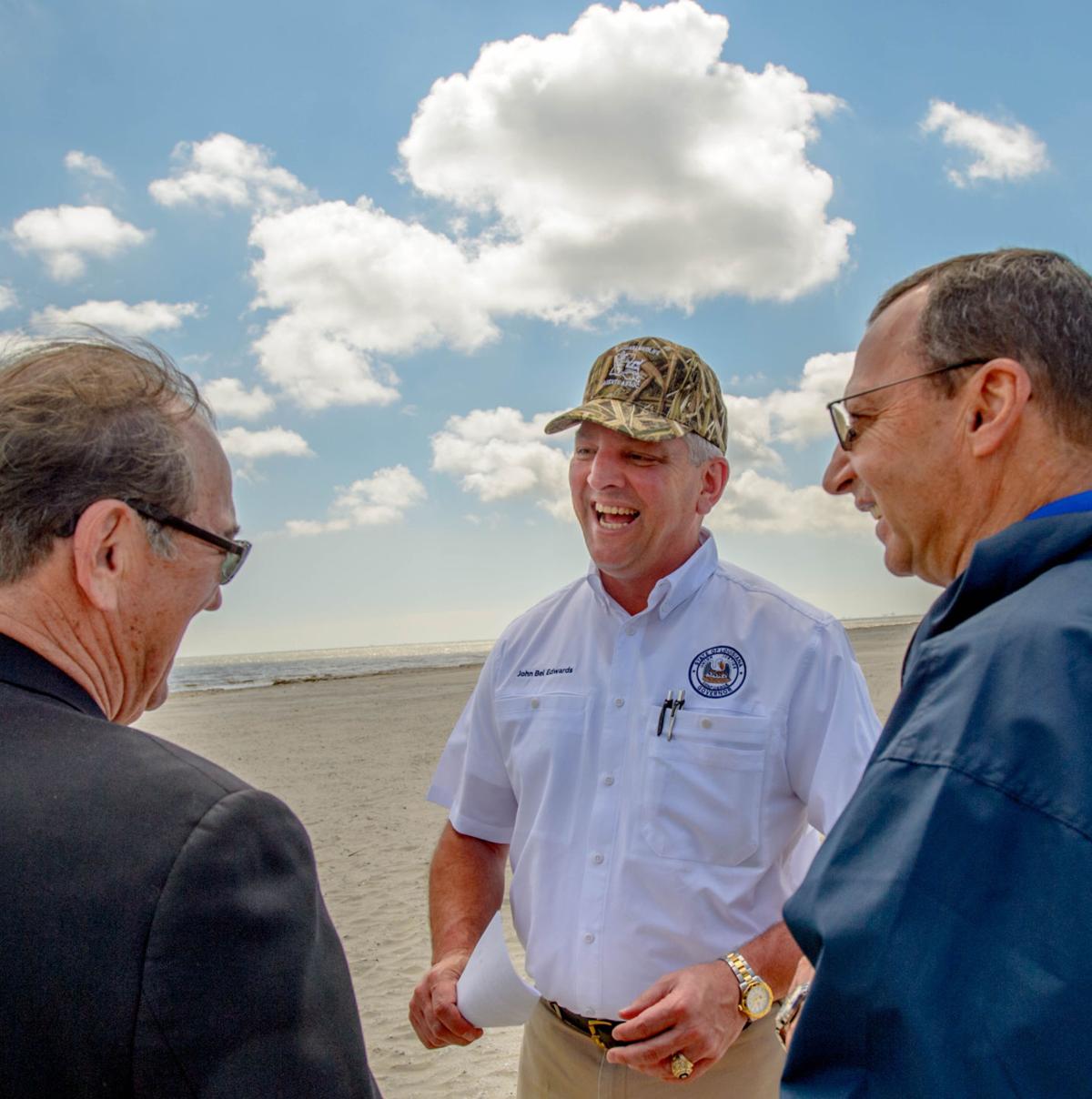 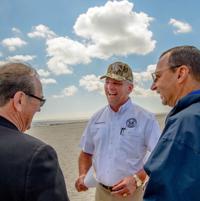 Louisiana Governor John Bel Edwards talks with Louisiana Department of Wildlife and Fisheries secretary Jack Montoucet, left, and Coastal Protection and Restoration Authority Chair Johnny Bradberry on the restored beach on Elmer's Island in Grand Isle, La. Tuesday, March 21, 2017. The project is the largest single coastal ecosystem restoration in CPRA history, including a 13-mile restoration of the Caminada Headland from the mouth of Bayou Lafourche to Caminada Pass.

Louisiana Governor John Bel Edwards talks with Louisiana Department of Wildlife and Fisheries secretary Jack Montoucet, left, and Coastal Protection and Restoration Authority Chair Johnny Bradberry on the restored beach on Elmer's Island in Grand Isle, La. Tuesday, March 21, 2017. The project is the largest single coastal ecosystem restoration in CPRA history, including a 13-mile restoration of the Caminada Headland from the mouth of Bayou Lafourche to Caminada Pass.

Nearly a decade after the Deepwater Horizon disaster gushed more than 200 million gallons of crude oil into the Gulf of Mexico, Louisiana is preparing to spend $60 million in recovery money to enhance outdoor recreation offerings in coastal parishes.

"The wheels of government sometimes turn slow — more slowly than we would like," Gov. John Bel Edwards said Tuesday in announcing the 23 projects that will benefit from BP oil spill settlement funds earmarked for recreational upgrades. "We are finally at a point where we can discuss specific projects that will, in fact, be funded."

Fishing piers in Cameron, Jefferson, St. Mary and Terrebone parishes; boating access improvements in Jefferson, Plaquemines, St. Charles, St. Mary, St. Tammany and Terrebone Parishes; educational upgrades to the Lake Charles Science Center in Calcasieu Parish and The Wetlands Center in Jefferson Parish to promote conservation; and enhancements to 11 existing artificial reef sites across the coastline are just a few items on the list, which has been in development for more than two years.

Work on some projects could begin by the end of summer, and the settlement money is available for design and construction so Edwards said they will be on the fast-track to completion.

"We are the 'Sportsman's Paradise,' and we are moving forward and going beyond where we have ever been before," Edwards said.

The money is part of billions that BP agreed to pay Louisiana and other Gulf states affected by the April 2010 oil spill. The Deepwater Horizon killed 11 people and injured 17.

As oil flowed into the Gulf and along the coast, it also forced the closure of beaches, fishing areas, campsites and other outdoor offerings and set the state out on a massive cleanup effort.

Louisiana officials have spent the past two years developing the list of projects to benefit from $60 million in settlement dollars earmarked specifically for recreation.

"There is a lot of need out there," he said.

Bradberry said the final projects list was drafted by the Louisiana Trustee Implementation Group after a thorough process that included months of public hearings and input. The projects selected include a mix of state and local, as well as one that falls under the U.S. Department of the Interior and another under the Chitimacha Tribe.

Projects included on the list of upgrades announced Tuesday are meant to encourage tourists and Louisiana residents to fish, camp, boat and take part in other outdoor activities.

WASHINGTON — With the flourish of a marker across a huge human-sized check, Interior Secretary Ryan Zinke on Thursday signed off on the first …

"It's about recreation, enhancing the opportunities to enjoy the bounties of our coast," Department of Wildlife and Fisheries Secretary Jack Montoucet said. "This is another case of Louisiana being smart about taking a bad situation and improving the wellbeing for our citizens."

Lt. Gov. Billy Nungesser said he was particularly encouraged by the number of land-based fishing amenities, including new fishing piers and boardwalks, that people will gain access to.

"As many people come to Louisiana, they don't have the luxury of owning a boat or paying for a charter," said Nungesser, who, as lieutenant governor, is the state's chief tourism officer. "You can fish anywhere, but you catch fish in Louisiana."

Jefferson Parish is slated to benefit more than any other parish from the recreational boost, with $18.5 million going to six projects there, including nearly $1 million toward a boardwalk for fishing and wildlife viewing, fishing piers, restrooms and lighting as part of the first phase of the Wetlands Harbor Activities Recreational Facility project in Westwego. Grand Isle State Park will receive $6.1 million in upgrades, and $6 million will go toward enhanced access to and recreational features on Elmer's Island, including a shuttle service along Caminada beach, trash abatement and new kayak launches.

The Lake Charles Science Center will get $7 million, the largest individual project award, to construct a visitor's center, youth fishing pond and other educational exhibits.

Senate President John Alario, a Westwego Republican who attended Tuesday's announcement at the State Capitol, said the projects will give families more ways to enjoy the outdoors without leaving Louisiana. "It provides for good wholesome fun within our state," he said.

Nungesser said that the funding, which does not affect the state budget and must be spent on recreation, comes as parks have been having to cut back due to fewer local resources available.

"This couldn't have come at a better time for us," he said.

People who have spent years asking for a quality boat launch on the St. Charles Parish side of Des Allemands apparently will get their wish, a…