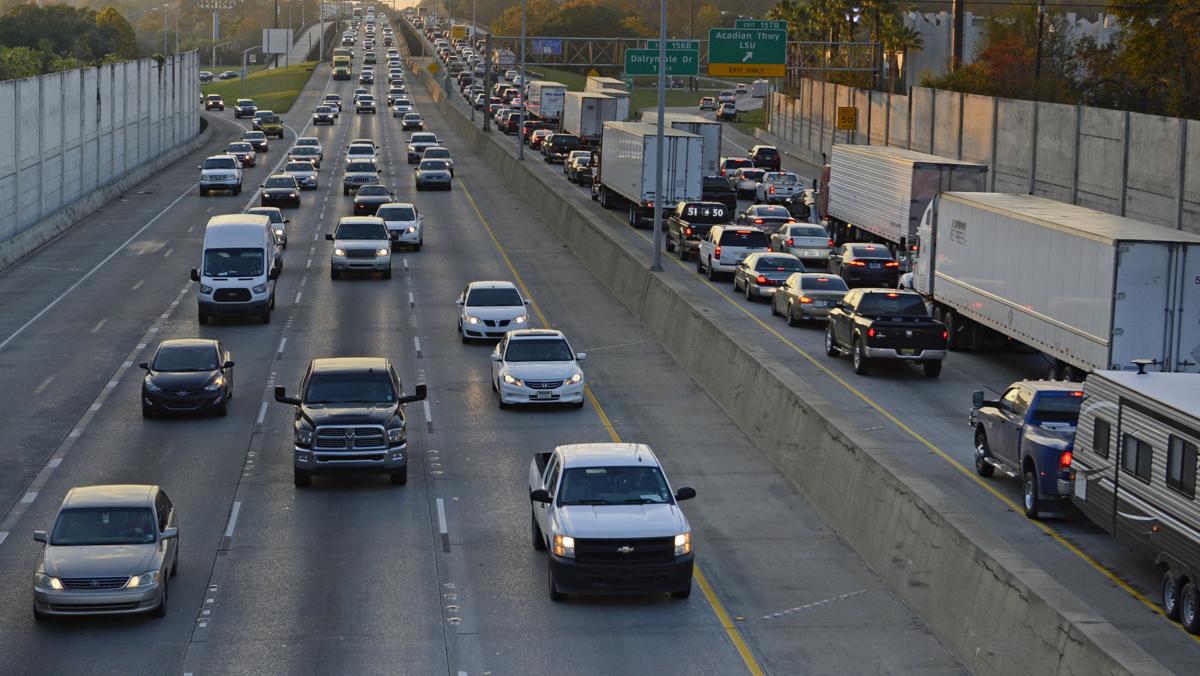 Westbound traffic, right, slows as eastbound traffic, though heavy, flows consistently on the left during rush hour, Wednesday, December 21, 2016, on Interstate 10 near the Nairn Drive overpass in Baton Rouge. 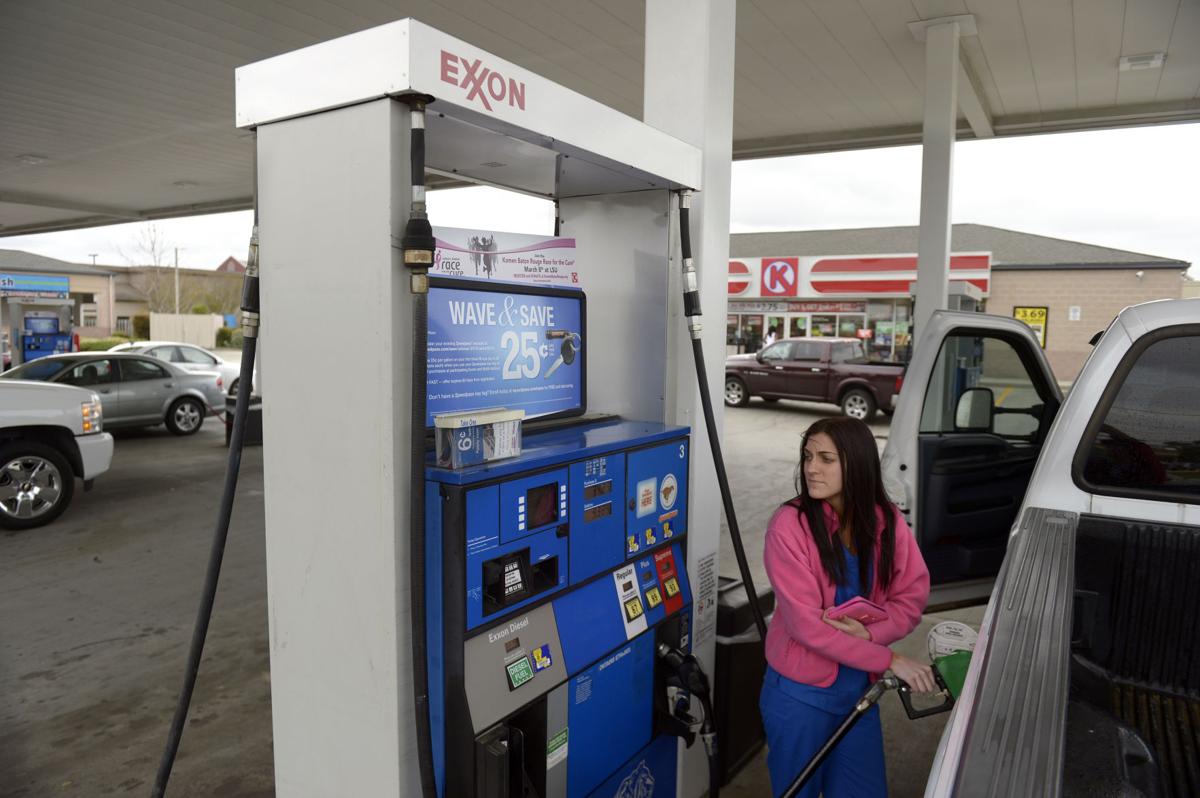 Janna Schwartzberg fills up her tank with Exxon gasoline in Baton Rouge.

Westbound traffic, right, slows as eastbound traffic, though heavy, flows consistently on the left during rush hour, Wednesday, December 21, 2016, on Interstate 10 near the Nairn Drive overpass in Baton Rouge.

Janna Schwartzberg fills up her tank with Exxon gasoline in Baton Rouge.

While a special panel named by Gov. John Bel Edwards has called for $700 million a year in tax and fee hikes for work on the state's roads and bridges, there are three key questions on whether any such plan will become reality.

How much the governor will recommend to the 2017 Legislature is still to be decided, and it could be considerably less than $700 million.

Second, the next round of state government budget problems will play a big role, and it remains to be seen how much transportation can expect amid repeated cuts for colleges and universities, health care and other state services.

Finally, whether a $700 million tax and fee hike can win legislative support is unknown, especially in the all-important House Ways and Means Committee.

The governor's 18-member task force, including legislative leaders, stopped short of spelling out a specific plan to raise the money.

But the final report, released Friday, said state gas taxes offer "the most reliable, proven and meaningful source of funding for transportation," while fees and other sources can also play a role.

Motorists now pay 38.4 cents per gallon in taxes, including 20 cents in state taxes.

Relying on the gas tax alone to raise $700 million per year would require a hike of about 23 cents, more than double the current rate.

Asked for a comment on the task force report, the governor issued a statement that said he is "very pleased with its work and recommendations."

"Our transportation challenges did not occur overnight and neither will our solutions," he said.

"Our fiscal stability, economic competitiveness and quality of life are at stake in the upcoming session, and I look forward to working with House and Senate members to develop and enact sustainable, nonpartisan solutions for multimodal transportation in Louisiana," Edwards said.

The governor could recommend a smaller plan than the one suggested by the task force, and $350 million per year is seen as the minimum needed to make significant road and bridge improvements.

However, there are signs the Legislature has concerns about a major tax hike, even if lawmakers agree that road and bridge problems demand attention.

If Edwards submits a major plan, the key showdown likely would be in the House Ways and Means Committee, which votes on all revenue-raising measures.

Rep. Neil Abramson, D-New Orleans, chairman of the panel, said that while infrastructure is a priority, "I'm reluctant to embrace a mere tax increase as the solution."

He said he has not seen the full recommendations of the task force.

Senate Transportation Committee Chairman Page Cortez, R-Lafayette, a member of the governor's panel, said Abramson's committee would play a huge role in the fate of any transportation plan.

Backers say a $700 million per year increase in transportation spending would allow the state to trim its $13.1 billion backlog of needed work and accelerate work on a separate $16 billion list of mega-projects.

The state's $13 billion backlog of needed road and bridge work is mostly for highway work, h…

The latter list includes a new bridge across the Mississippi River in Baton Rouge, south of the current one.

Erecting a new bridge across the Mississippi River in Baton Rouge is suddenly a hot topic.

"I think there is interest to do something on transportation," said Shawn Wilson, co-chairman of the task force and secretary of the state Department of Transportation and Development.

"The question is how significantly will it impact the discussion, given all the other budget issues dealt with during the session," Wilson said.

The Legislature convenes on April 10.

The House Transportation Committee would be another key stop in the legislative process for any road and bridge overhaul.

Rep. Kenny Havard, R-St. Francisville, chairman of the panel, has long had concerns about a big hike in the gasoline tax.

"I just think with gas prices going up every day, we are going to be really hard pressed to convince our colleagues that 23 cents is politically feasible," Havard said. "I know for sure that if we put it up for a vote of the people, they will vote it down as well."

In its final report, the task force said Louisiana's infrastructure construction spending is the lowest of any state in the South.

Much of what motorists see and will see stems from special funding, like $100 million in federal grants DOTD landed last year that will finance lane changes near the "new" Mississippi River bridge in Baton Rouge.

The upcoming debate will mix state finances, politics and conflicting demands from taxpayers.

"There are a lot of moving parts," Cortez said.

Letters: Not much hope for progress on state's problems

In Stephanie Grace’s excellent article in Sunday’s issue of The Advocate she asks, "Where is the urgency on climate change?," and she correctl…

Letters: Thanks to DOTD for assistance

If you've seen those bright red trucks with flashing lights on The interstate highways, remember they are there to help not hinder traffic. I …

In something of a political Hail Mary, the chairman of the state House Transportation Committee said he plans to file legislation that would d…

In a first, Louisiana to gauge private firms' interest in helping improve I-10 in Baton Rouge

In a first  for Louisiana, state transportation officials announced Monday they will solicit input from private firms to fast track major impr…

Letters: Electric cars should be taxed, too

There is no doubt there is a need for more revenue to meet the need to construct, maintain and improve the state's roads and bridges. However,…

Gov. John Bel Edwards on transportation woes: My support 'unyielding;' 'we want to be bold'

Gov. John Bel Edwards said Friday that, while Louisiana faces huge road and bridge problems, he is not ready to spell out how much he will rec…