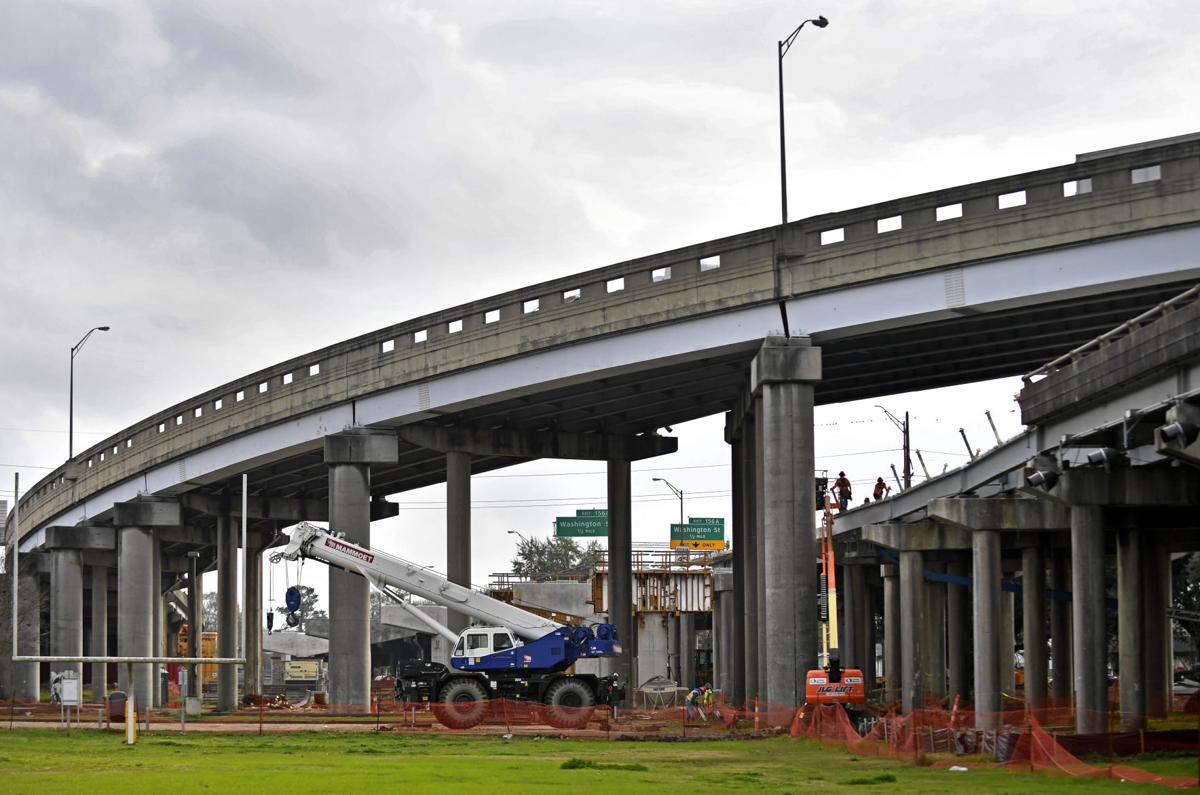 Construction continues on the Louis Armstrong New Orleans International Airport North Terminal Project and entrance road in Kenner, La. Wednesday, Jan. 18, 2017. Mayor Mitch Landrieu and the New Orleans Aviation Board (NOAB) announced a five gate expansion of the bringing the total number of gates from 30 to 35.

Construction continues on the Louis Armstrong New Orleans International Airport North Terminal Project and entrance road in Kenner, La. Wednesday, Jan. 18, 2017. Mayor Mitch Landrieu and the New Orleans Aviation Board (NOAB) announced a five gate expansion of the bringing the total number of gates from 30 to 35.

The panel endorsed the sale of $185 million in bonds, including $77.6 million for a new entrance to Louis Armstrong New Orleans International Airport and about $30 million to start the widening of Interstate 10 in Baton Rouge.

Work on the Loyola Drive interchange in Kenner is set to start in August, take four years to finish and cost about $125 million, Louisiana's t…

Another $61.1 million is earmarked for a new state route off I-220 in Bossier City to Barksdale Air Force Base.

The debt will be paid off by the state using a portion of annual federal road and bridge aid – $67 million of the roughly $780 million allocated yearly – that otherwise would be used for other projects.

The commission approved the plan without dissent or discussion, which was something of a surprise in an election year.

Shawn Wilson, secretary for the state Department of Transportation and Development, was in the hearing room but did not address the panel.

The federal bonds are called Grant Anticipation Revenue Vehicle, known as GARVEE bonds, and have been used by about two dozen other states for transportation projects, officials said.

The $185 million will give state officials enough cash flow on the projects for about two years.

Then officials of the state Department of Transportation and Development will return to the commission for a second round of borrowing.

How much that request will total is unclear.

About $15 million of the initial outlay approved Thursday will be used for bond-related fees and contingencies.

One of the projects targeted with the first round of dollars is a new interchange on I-10 at Loyola Drive in Kenner to speed access to the airport. The work, which totals $125 million, includes the widening of off-ramps at Loyola and the expansion of both Loyola and Veterans Memorial Boulevard.

Wilson acknowledged that motorists will face slowdowns during construction while they navigate makeshift routes.

The new terminal at Armstrong Airport is due to open in mid-May. Construction on the interchange is set to start in August.

The Baton Rouge project will eventually add a new lane in each direction between the "new" Mississippi River bridge and the I-10/I-12 split.

Noticeable work on widening I-10 in Baton Rouge a year away, transportation chief says

The total is $380 million, up from $360 million earlier because costs of the Bossier City project came in less than expected, freeing up money for the Baton Rouge work.

Initial work is set to include construction of a flyover to College Drive for westbound traffic on I-10. Those motorists now have to cross three lanes of traffic, including westbound travelers merging onto I-10 from I-12, to reach always-congested College Drive.

The entire widening work is expected to take 5-7 years.

The $185 million start was endorsed earlier this week by the Joint Legislative Committee on the Budget.

The issue sparked more discussion there, including complaints from Sen. Conrad Appel, R-Metairie, that the new terminal and Loyola interchange are not being finished at roughly the same time.

Wilson said then that no money for the road work was set aside before Gov. John Bel Edwards took office in 2016.

The previous year an Edwards administration-backed bid to boost the state gasoline tax by 17 cents per gallon, and raise about $500 million per year, died in the Legislature without a vote on the state House or Senate floor.

Plans call for using up to $12.5 million of the overall package to help finance the replacement of the Belle Chasse tunnel and movable bridge.

Louisiana has a $14.3 billion backlog of road and bridge projects, and the governor's plan is touted as a way to make progress until yearly transportation revenue rises.

Trade groups are pressing for an election-year gas tax debate during the session that starts April 8.

Wilson said earlier this week that he doubts a serious discussion will take place.

As part of the Interstate 10 widening project, I-10 eastbound in Ascension Parish will be down to one lane from Highland Road to La. 73, for s…