You are the owner of this article.
Edit Article Add New Article
You have permission to edit this article.
Edit
Home
Coronavirus
News
Sports
Entertainment/Life
Opinion
Obituaries
Classifieds
Jobs
Homes
Games
Store
1 of 17 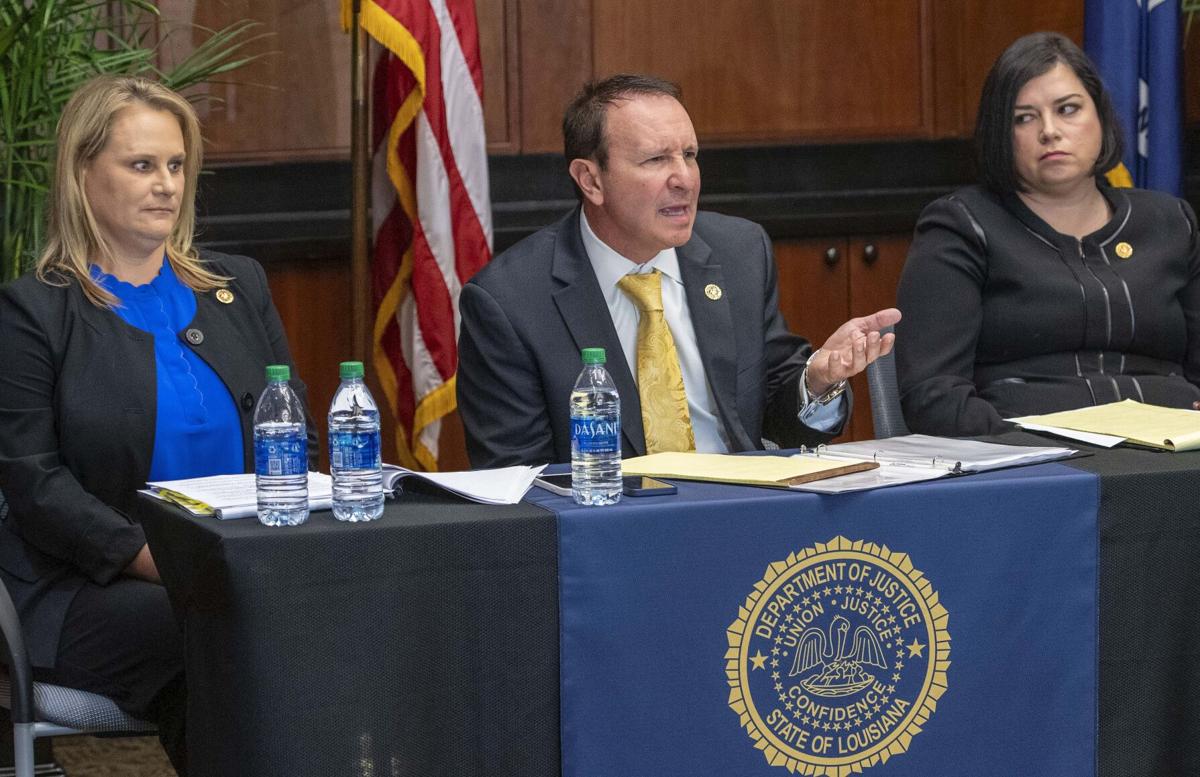 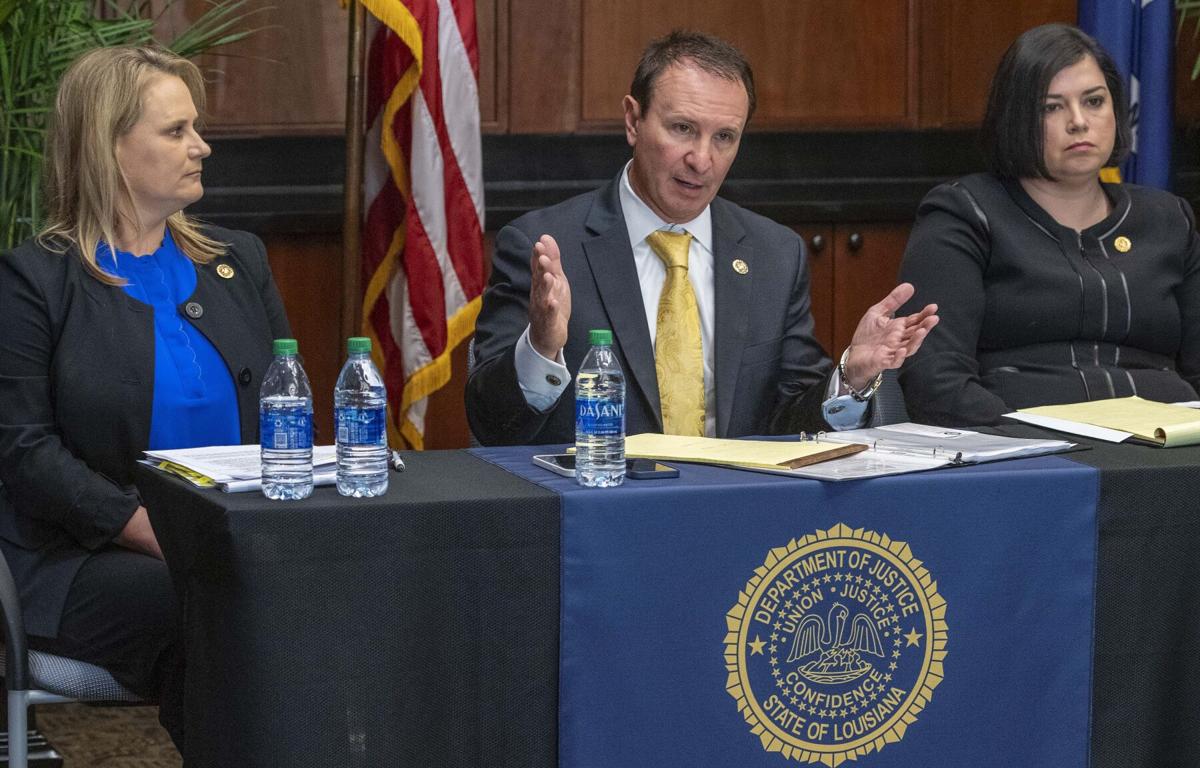 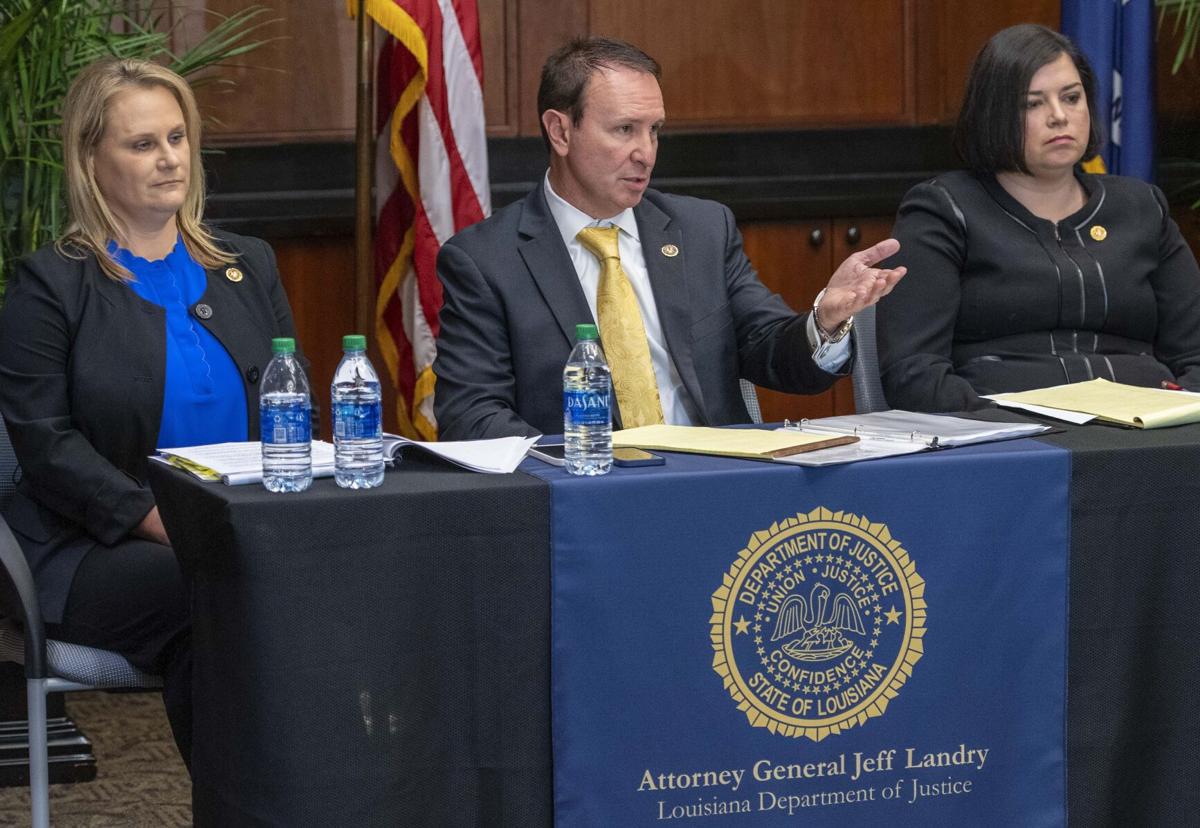 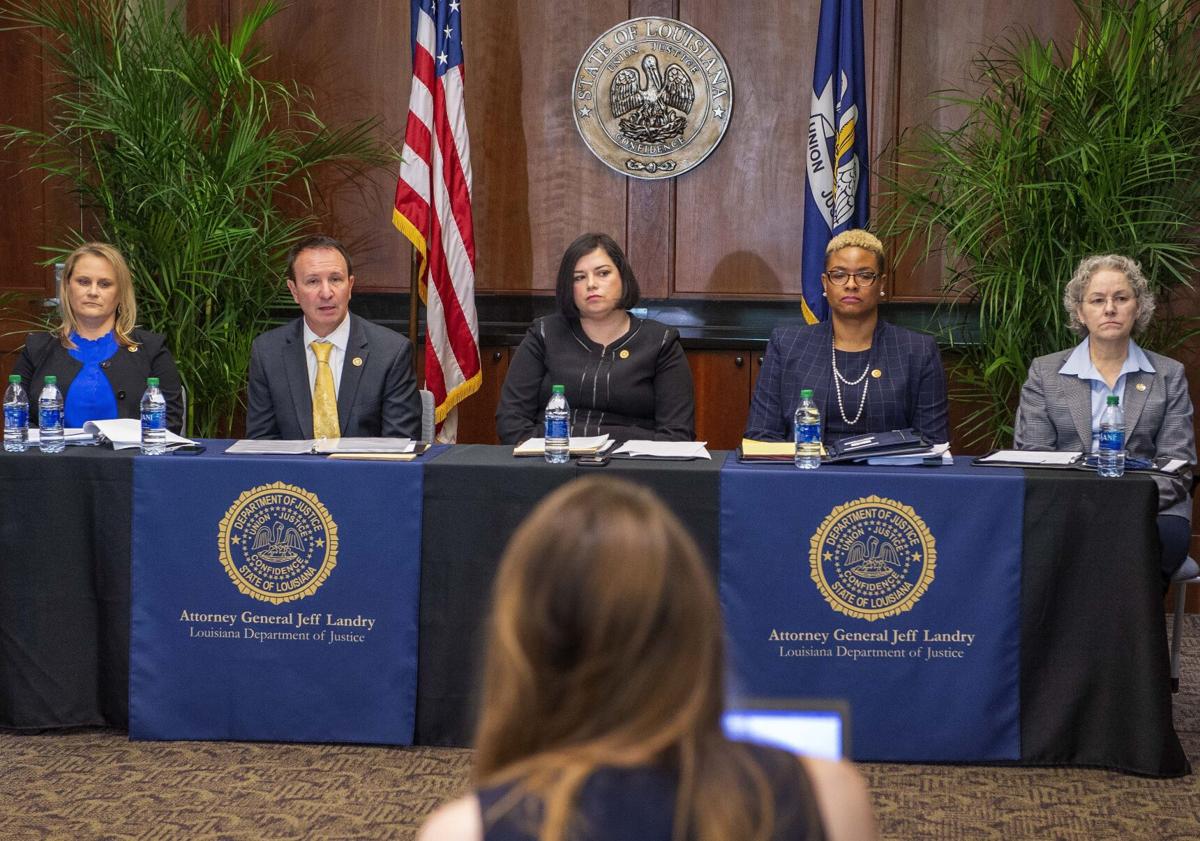 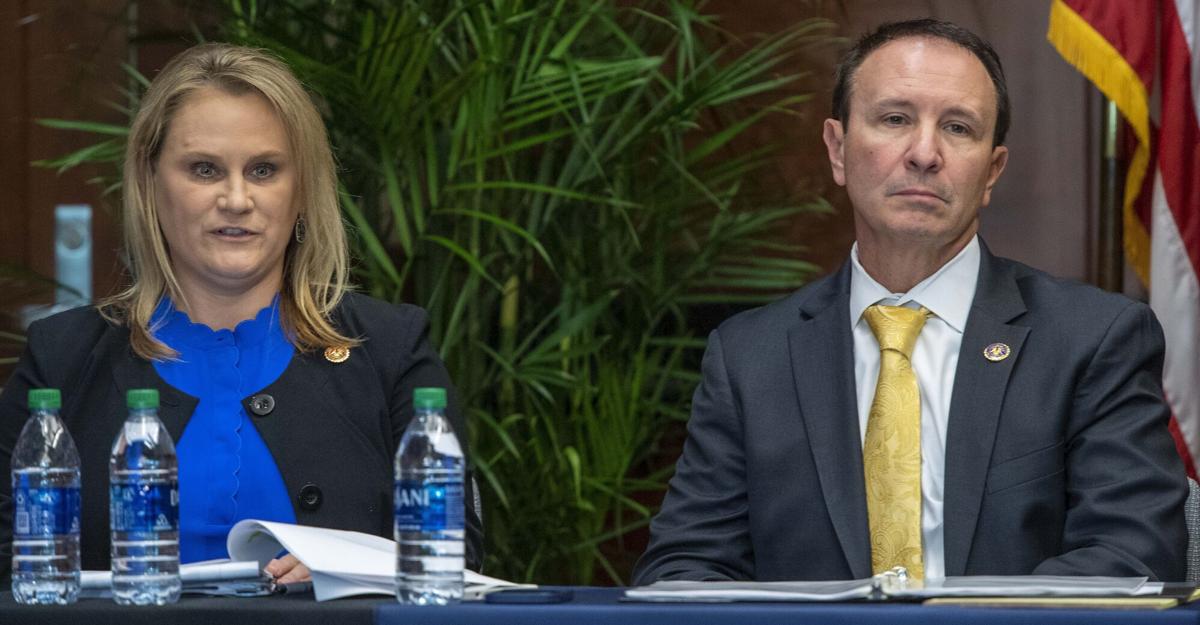 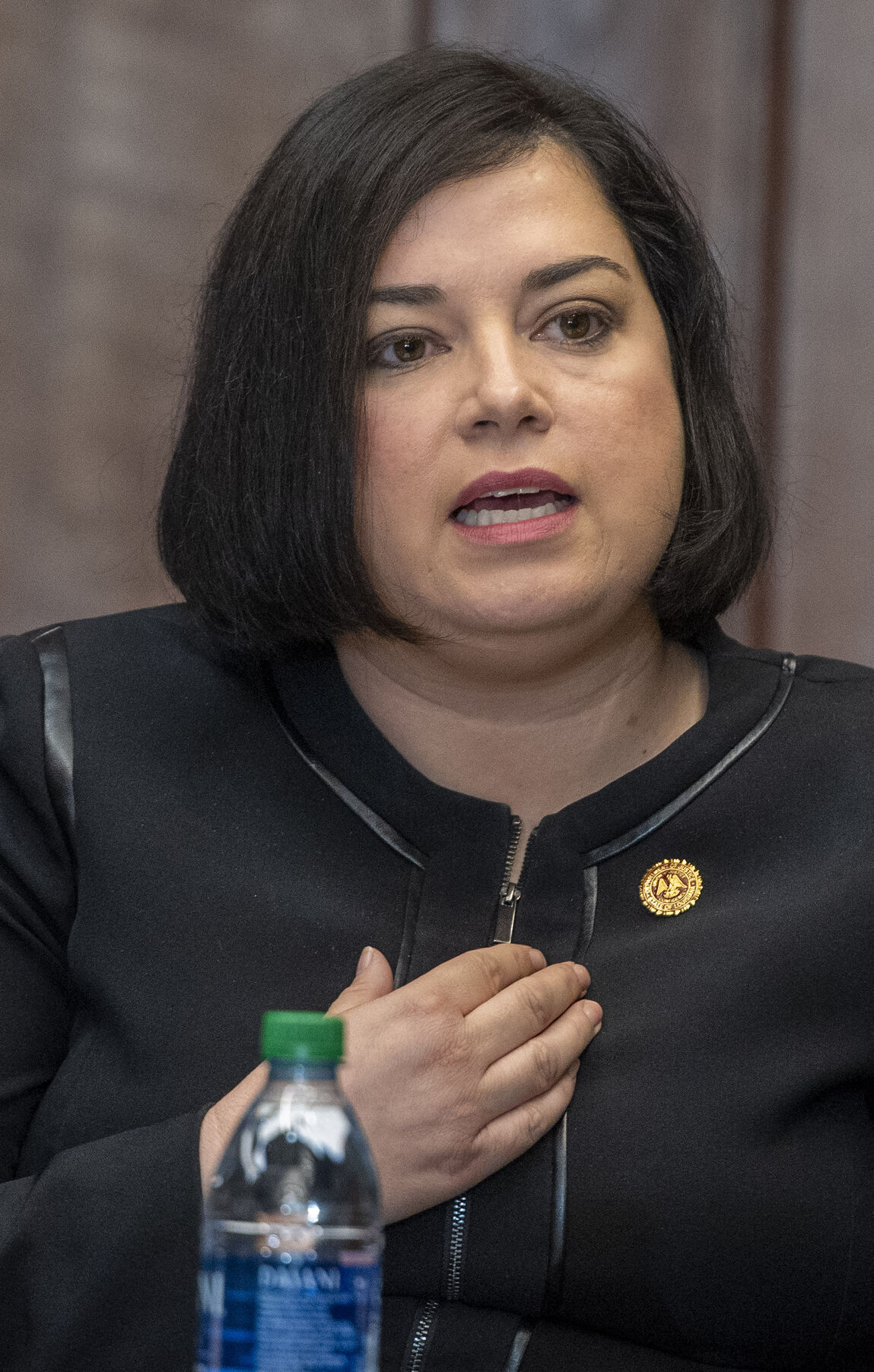 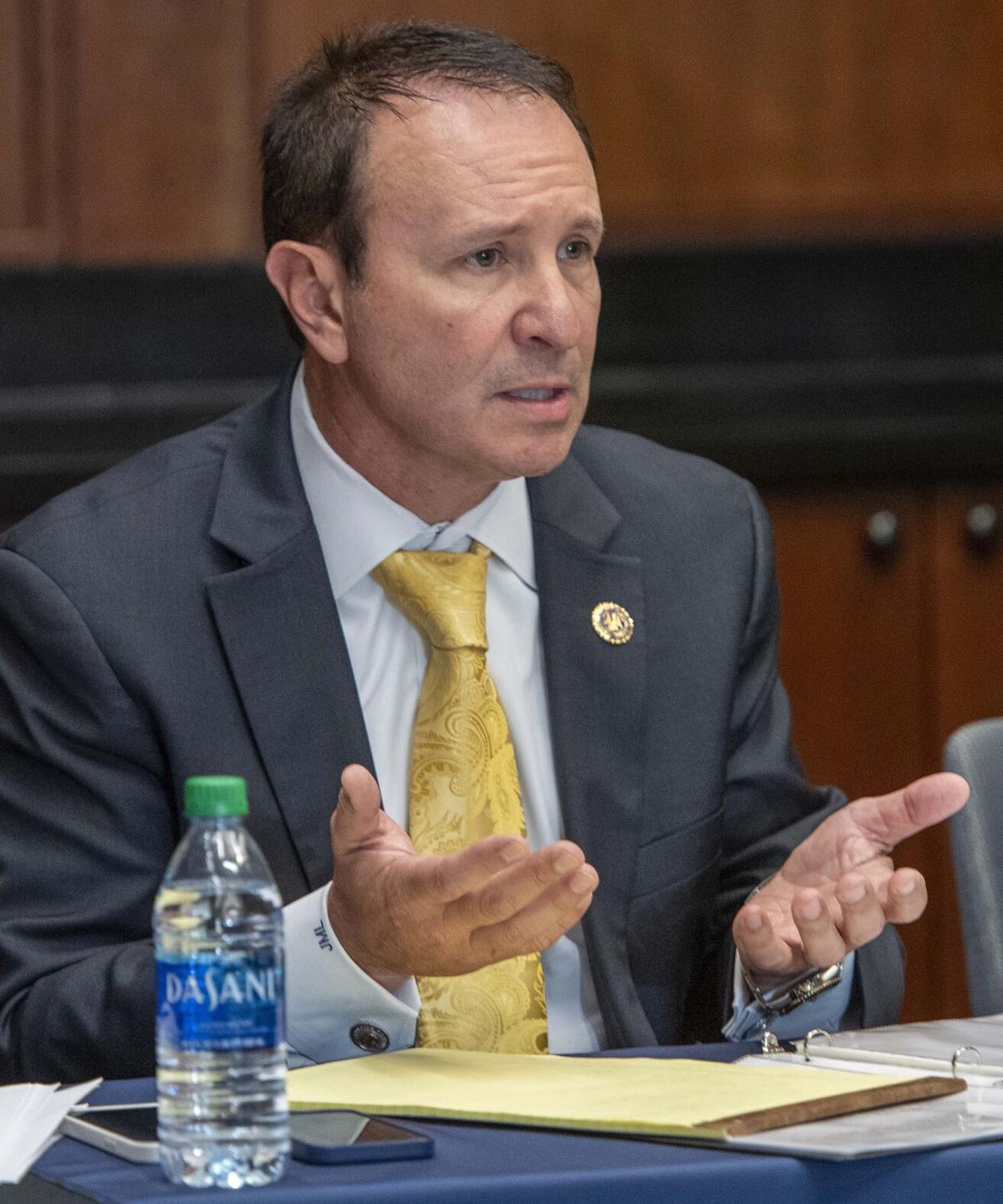 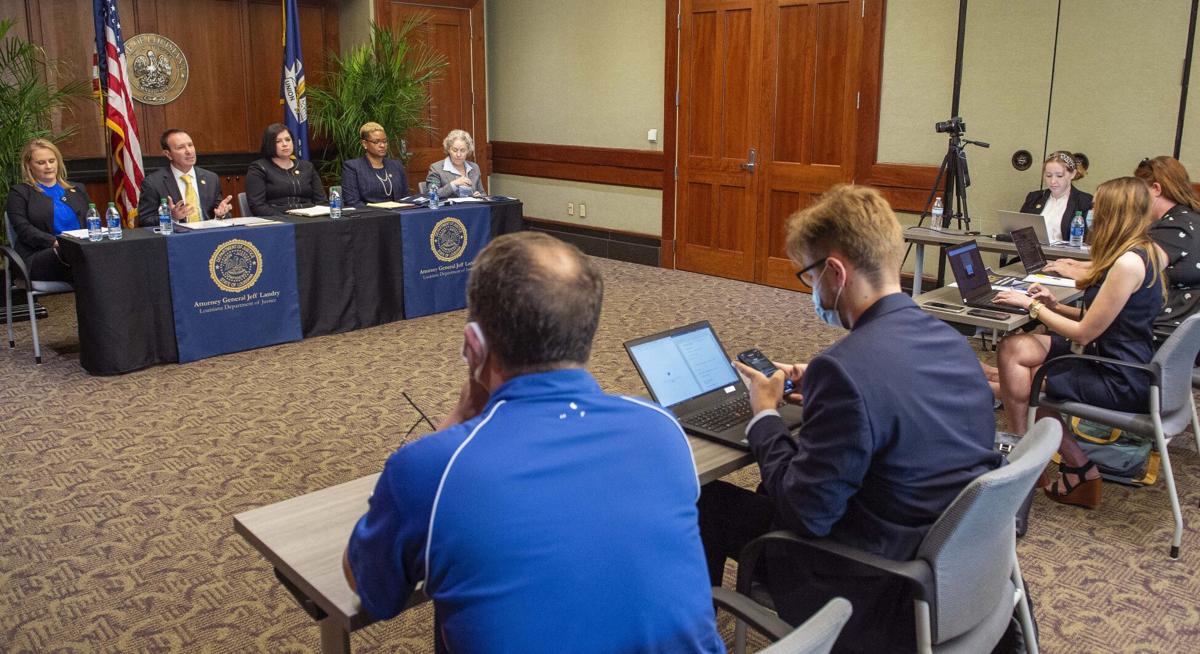 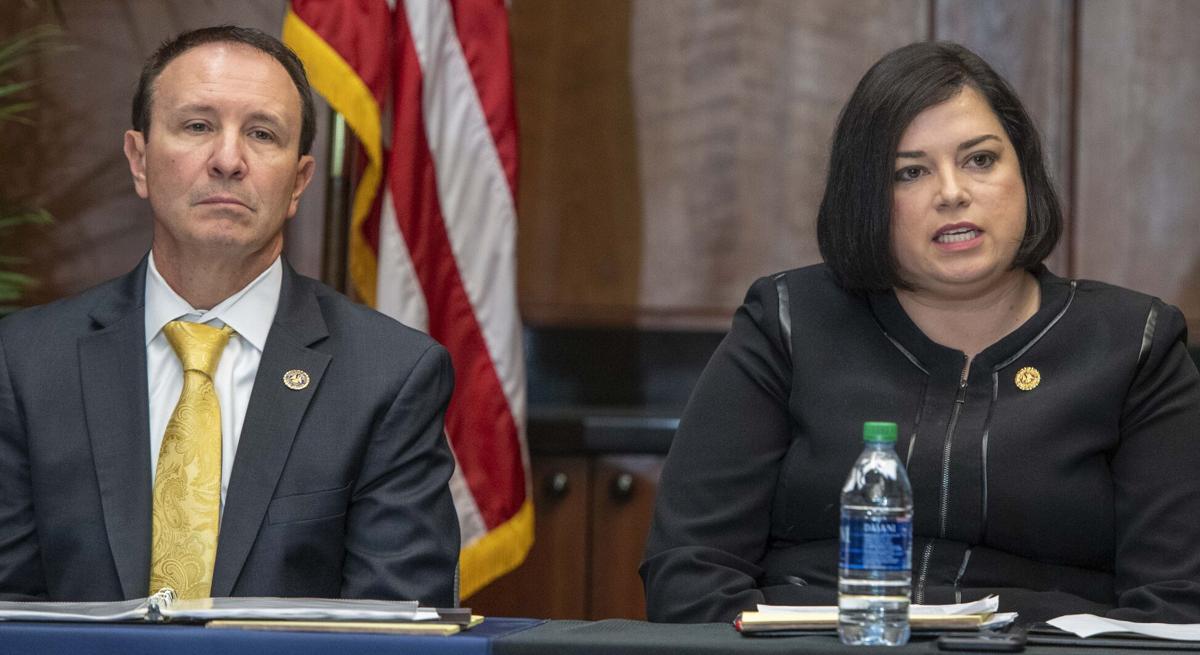 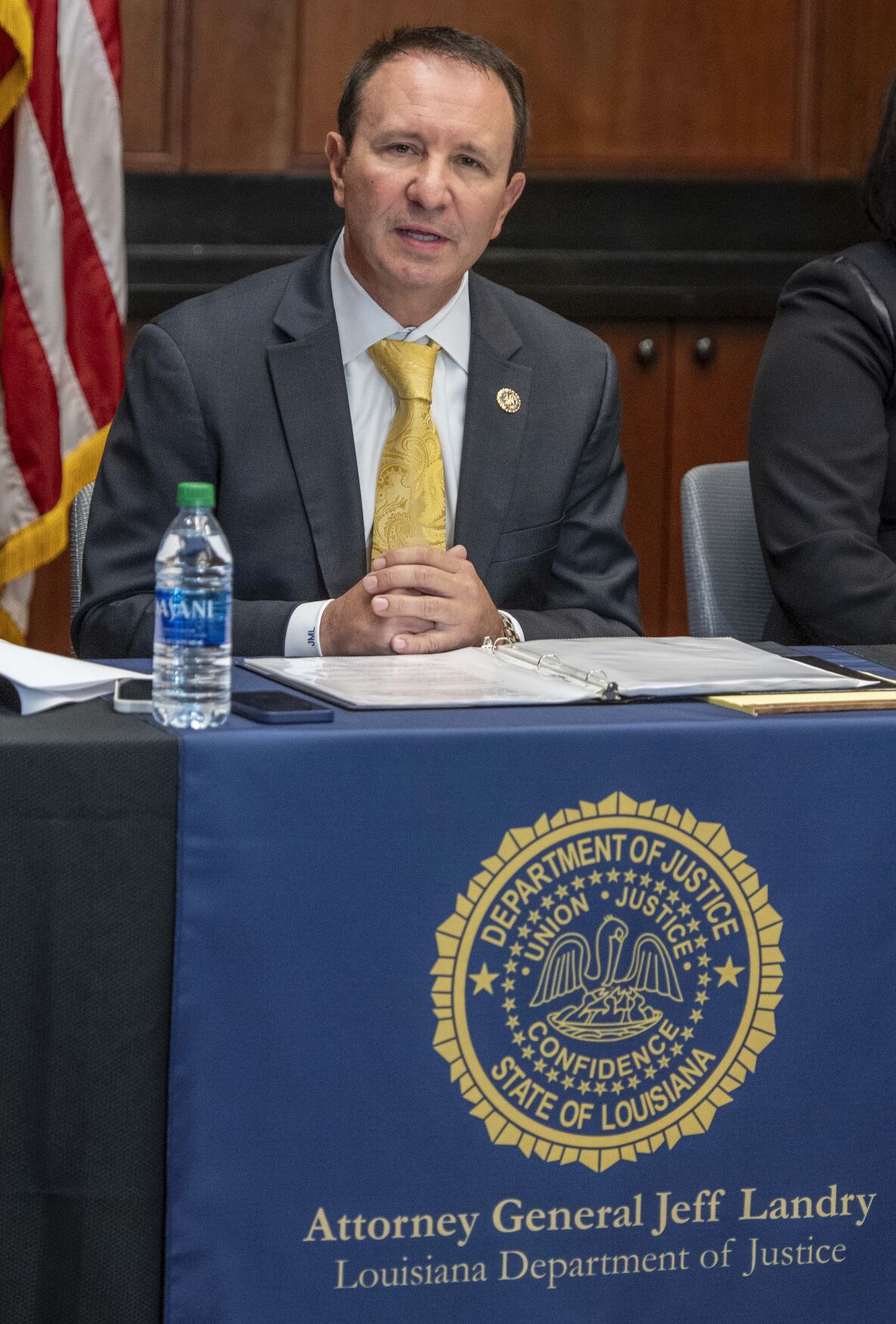 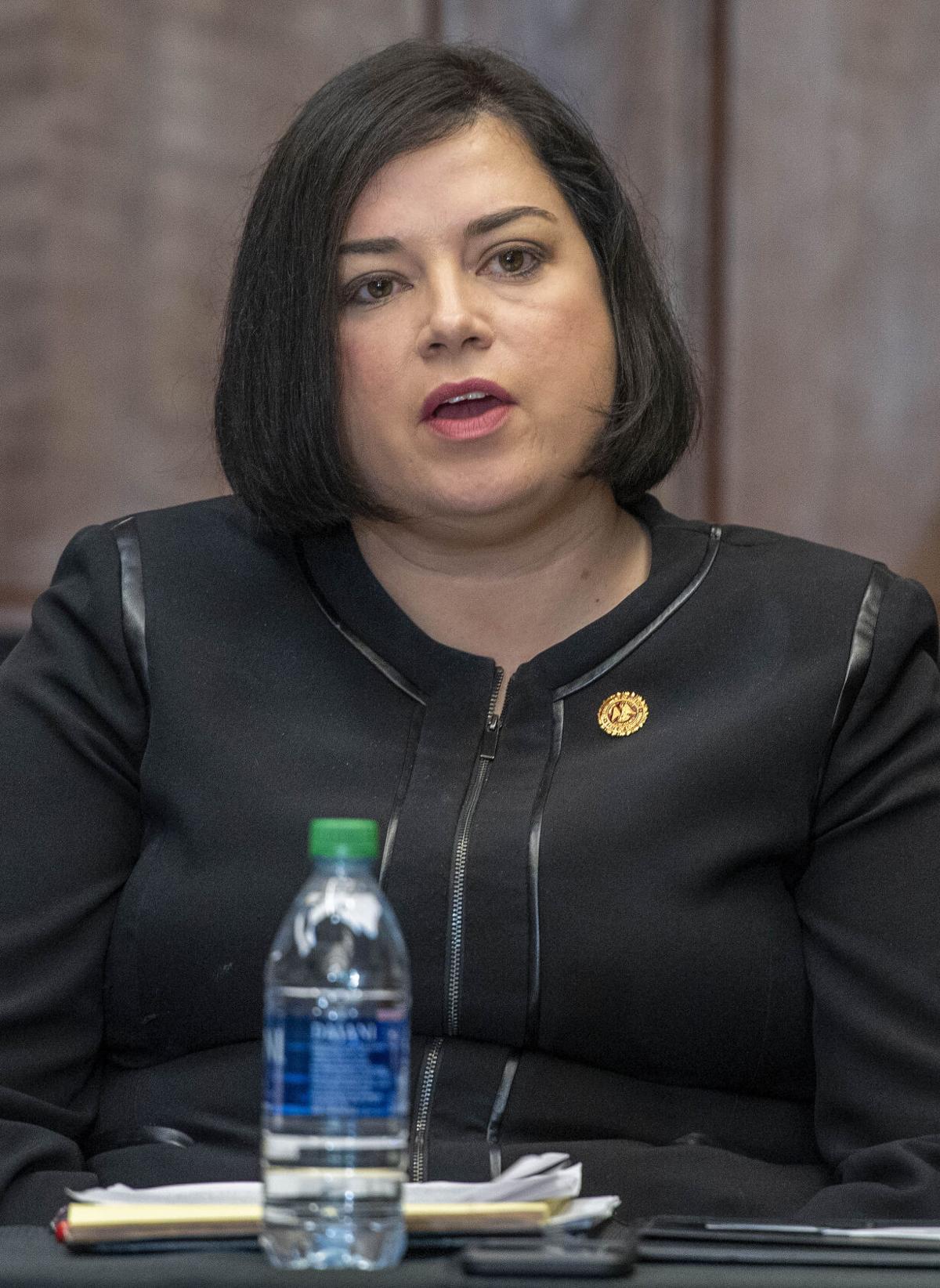 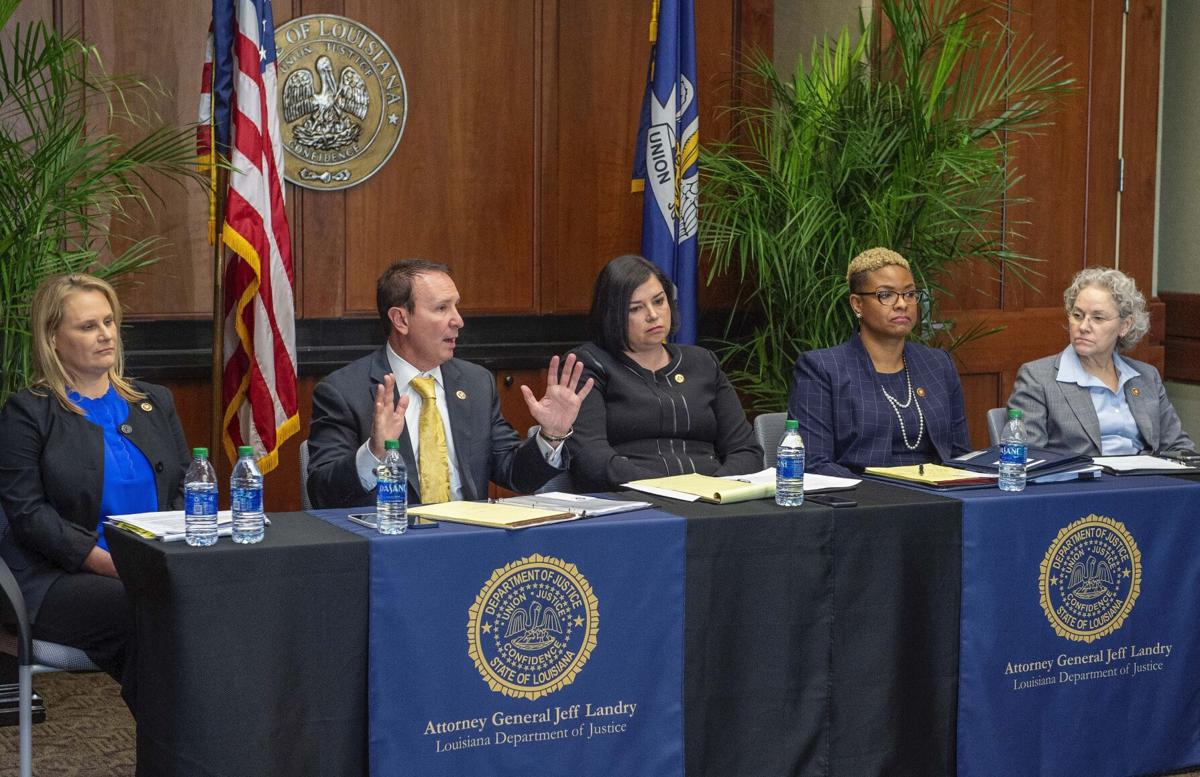 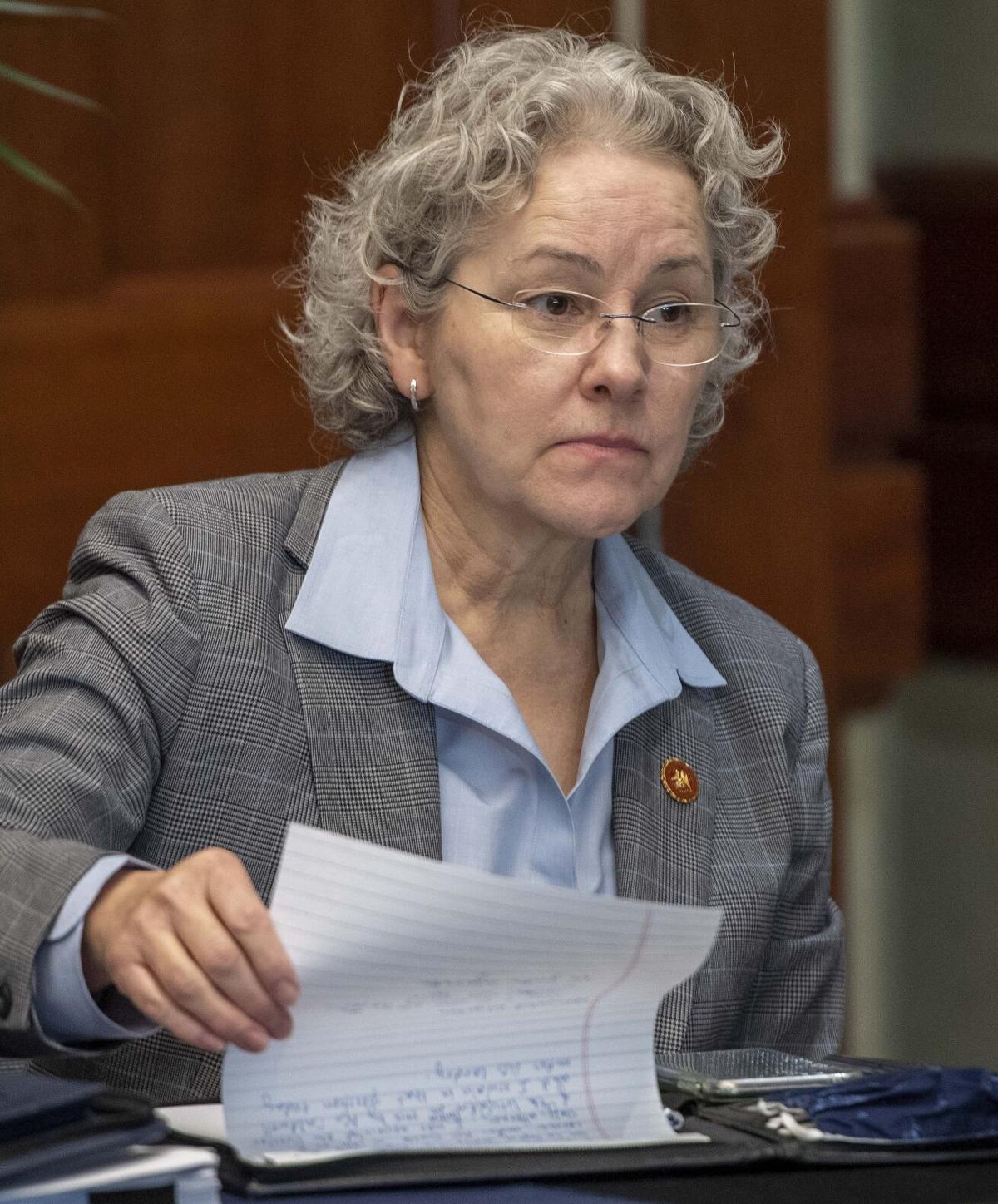 Flanked by a cadre of women who work for him, state Attorney General Jeff Landry spent much of an hourlong news conference Tuesday trying to poke holes into the accounts of employees who complained about sexual harassment by Pat Magee, a former top aide to Landry.

Landry and his staffers said that the employee whose complaint set off an investigation should have reported the accusations about Magee, who headed the office's criminal division, long before he did so. Another woman, they said, was incorrect when she complained she hadn't been interviewed about her complaints against Magee. And they noted that a third never reported harassment by Magee while she worked for the Attorney General's Office, though she filed a complaint after she left the office.

While Sandra Schober, deputy director of Landry's administrative services division, said that it was clear that Magee engaged in inappropriate workplace conversations, she reiterated that Magee's actions did not rise to the level of sexual harassment. Landry's office continues to refuse to release records that explain how officials came to those conclusions, though Schober has released a memo that details some of her thinking, and on Tuesday, she noted that some of the complaints against Magee were a "he said-he said" situation, in a reference to the male whistleblower.

“Our goal is to serve the citizens of Louisiana irrespective of what shows up in the newspaper," Landry said, one of a number of jabs he took at the coverage of his office's handling of the matter by The Advocate | The Times-Picayune.

Landry also announced that that former Orleans Parish District Attorney Leon Cannizzaro is taking over part of Magee's role; he will become co-director of the office's criminal division. Cannizzaro will serve along with co-director Marty White, who is expected to retire soon.

After the news conference, Assistant Attorney General Matthew Derbes -- who served as deputy director of the criminal division under Magee -- publicly identified himself as the whistleblower who reported his former boss's misconduct. Derbes resigned from the office on Monday, saying Landry was clearly retaliating against him for raising his complaints. He wrote in his resignation letter that he'd been passed over for a promotion and then "effectively demoted" after he complained about Magee.

"My sincerest hope was that the sexual harassment and my other reports would be addressed fully, fairly and without retaliation," he wrote in his resignation letter. "Instead, this office has targeted me and those who had the courage to stand up."

Though Landry did not name Derbes at his news conference, he repeatedly said that a high-ranking staffer's reports of sexual misconduct from Magee were not credible because of other problems that the office had turned up with the person who made them. Landry accused the staffer of sending texts that were "sexist in nature" and said he'd formerly been investigated by a state agency for impersonating a state employee on social media.

“It’s abhorrent to me that he would call the victims liars and that he would portray their complaints in such a manner as to essentially deflect from his own responsibility," said attorney Jill Craft, who is representing Derbes. Craft said that the social media posts were a joke from 10 years ago and that the investigation wrapped without repercussions for Derbes, until now, which she said made Landry's motives clear.

Derbes has filed a complaint with the Equal Employment Opportunity Commission, which is the first step toward filing a lawsuit about retaliation or employment discrimination.

“It’s a shame that the chief law enforcement officer in the state of Louisiana has chosen to the perpetuate the myth that sexual harassment victims lie and that people who blow the whistle should be vilified when in fact they should be applauded," Craft added. "Unfortunately, it seems to be a commentary on why sexual harassment is such a big problem in this state.”

Landry called the news conference as questions continued to mount over how his office has handled the whole matter. Derbes' complaint, filed late last year, accused Magee of sexually harassing women in his office, and referenced five instances of women being on the receiving end of inappropriate behavior from Magee. The complaint said that Magee suggested one female attorney join a case because "male jurors would want to have sex with her," while it said that Magee repeatedly told another woman in his office that she was no longer as attractive as she once was in law school.

Landry hired the Taylor Porter law firm to investigate the allegations. When the investigation was complete, Schober, who oversees human resources, announced that Magee was not found to have sexually harassed anyone, but that he had behaved inappropriately and used unprofessional language at times. He was docked $20,559 in pay and ordered to attend a series of training seminars.

A second complaint filed last month, after the discipline was announced, said that Magee often relegated women in his office to cases that he deemed less serious, like traffic tickets. The woman who filed the second complaint, a lawyer, said she left the Attorney General's office over her treatment by Magee, and said that he affected her career path by pigeonholing women in his office to work on cases that he deemed "good for women." Magee resigned shortly after the second complaint .

Schober said her office has no record that that employee filed a complaint while working for the the Attorney General's Office, suggesting that the complaint lacked credibility as a result. She also read the final lines of the employee's resignation letter from September 2019: "Your office has been a wonderful place to begin my legal career and I will be forever grateful for the unforgettable opportunities provided to me during my time here."

The woman told a reporter when she filed her complaint last month that she had been afraid of coming forward about Magee while she still worked for Landry.

Our Views: Want to blow the whistle on misconduct? Jeff Landry will turn on you instead

When our reporter Andrea Gallo asked Jeff Landry for a copy of a sexual harassment complaint against a key Landry deputy, the attorney general…

During the news conference, Landry seemed to reference a female employee of the Attorney General's Office who appeared in a recent WBRZ-TV interview, with her face hidden and her voice distorted. The woman said that not enough employees were interviewed as part of the Taylor Porter law firm's investigation into Magee. But Schober insisted that she had previously interviewed the woman in the WBRZ interview, which she said addressed the woman's complaint.

Landry said that no one involved in the entire matter should be considered a "whistleblower," noting that the office's policy requires supervisor to report misconduct as soon as possible. But Derbes apparently reported far more than just the potential sexual harassment in Landry's office. His resignation letter says he raised various other red flags as well.

Another instance that Derbes said prompted him to come forward was "preferential treatment" for a "politically connected" person who faced 20 counts of child pornography involving juveniles under age 13.

Landry is due in court next week for a hearing in his lawsuit against a reporter for The Advocate | The Times-Picayune. While a Baton Rouge judge ruled against him last month and ordered that the initial complaint against Magee be publicly released, the judge is expected to rule on whether the Taylor Porter investigation into Magee should also be released.

After weeks of questions about his office's handling of complaints of sexual harassment against a top deputy, Attorney General Jeff Landry has…