Louisiana Public Service Commissioners are heading to Toledo Bend to vote Wednesday on lifting an ethics ban and allowing the utilities they regulate go back to wining and dining them.

Debate will take place during the PSC's regular monthly meeting – being held this month at the Cypress Bend Resort near Many – about 206 miles from its Baton Rouge headquarters, where most of the hearings take place.

Commissioner Mike Francis, R-Crowley, says he was elected in November on a platform of applying business principles to the operation of government. One of the key practices for businessmen is working lunches.

“Over the years I’ve been in business, the last 40 years, I’ve always had business lunches. We do business over lunch. It’s a pretty standard procedure in the real work world,” Francis told The Advocate in an interview Tuesday.

The 70-year-old, serving in his first elected office, previously ran a drilling fluids company that he founded in Acadiana.

Francis said he uses the time to learn about positions on issues – both pro and con – in a depth that otherwise would be unavailable to him.

“I’ll spend about the same amount of time on each side of a situation in order to come to a good, fair decision,” he said.

“I don’t understand why our rules have to be the strictest in the state,” Francis said. “What I’m asking is to go back to the rules we had prior to these rules we have here.”

The five elected regulators approved on a 3-2 vote in January 2009 an absolute ban for themselves, their spouses and their staffs from accepting food, beverage, entertainment and any other lagniappe from anyone connected to a company regulated by the PSC.

Commissioners Foster Campbell, D-Bossier Parish, and Lambert Boissiere III, D-New Orleans, were on the PSC at the time and voted for the prohibition. Commissioner Eric Skrmetta, R- Metairie, voted against the rule in 2009. 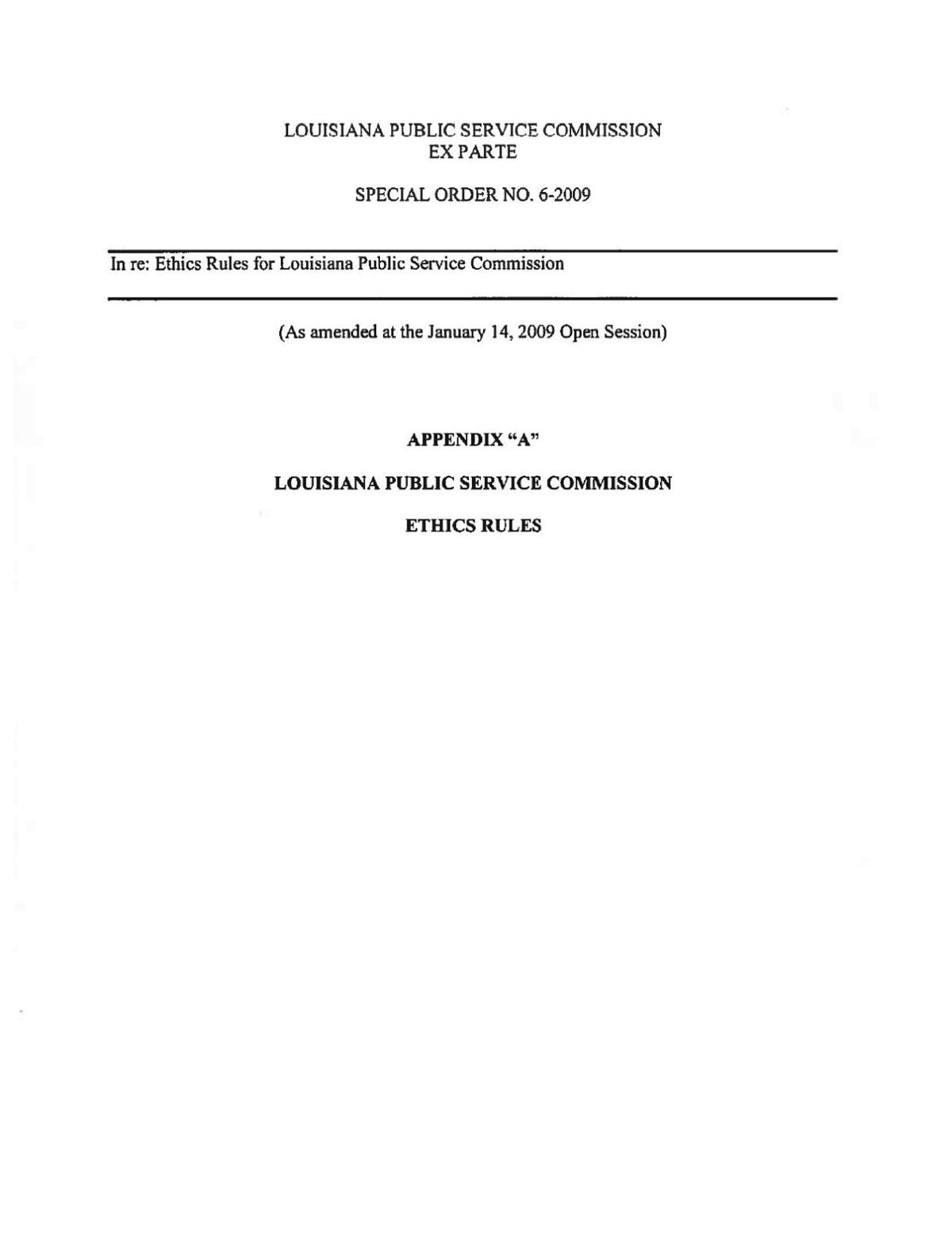 Francis and Commissioner Scott Angelle, R-Breaux Bridge, were not on the PSC at the time.

The rule came after the commissioners were buffeted with criticism for taking free meals from utility company lobbyists, then making decisions that enriched corporations, perhaps at the expense of the 2 million buyers of electricity in Louisiana. The commissioners at the time responded they followed the same rules as legislators, members of the executive branch and other elected officials, which limits meals to $60.

A Legislative Auditor’s report in October 2008 found 646 instances of firms providing food to commissioners, their staffers and spouses, for a total value of $16,277, during a four year period between 2002 and 2006.

“The public may view the food and beverage expenses as influencing decisions that PSC commissioners and staff make when they regulate utility companies,” auditors said.

On top of the audits that same month in 2008, critics found considerable fault in retiring PSC Chairman Jay Blossman, of Mandeville, hosting a campaign event for Skrmetta on the eve of a PSC meeting while much of Baton Rouge was without power after Hurricane Gustav.

“We had some people who did some things they shouldn’t have done. I think that’s why we got those rules,” Francis said. “It’s water under the bridge now.”

Not for Campbell, who said Tuesday he plans to oppose Francis.

“He says that’s the way business is done. Well, that’s the oilfield. This is public service. You do things different when you’re serving the public,” Campbell said in an interview. “When I go out to eat with Entergy or SWEPCO, we just split the bill.”

Campbell and Boissiere drafted the PSC rule, which includes a ban against campaign fundraising within 72 hours of the regulators meeting. That part was an ongoing issue for him during his run for the U.S. Senate last year. Campbell said that several times he had to explain the prohibition to supporters and ask them to reschedule fundraisers.

“But that wasn’t a big headache. You do what you have to do,” Campbell said. “If you ask the people of the state of Louisiana if they think elected officials should pay for their own lunches, it’d pass overwhelmingly. The only people not for it are the politicians.”

Logan Atkinson Burke, executive director of the Alliance for Affordable Energy, a New Orleans-based consumer group, said the issue is not whether an elected official can be bought for a steak dinner. Rather, it’s the access and comradeship such meals give lobbyists and industry insiders that is unavailable to everyday utility customers.

Our Views: PSC, utilities ought to go Dutch

The coziness between regulators and the regulated was once a way of life at the Public Service Commission, and we hope members have not forgot…

When people in politics talk about a free lunch, they're often speaking metaphorically about the idea of receiving something for nothing.