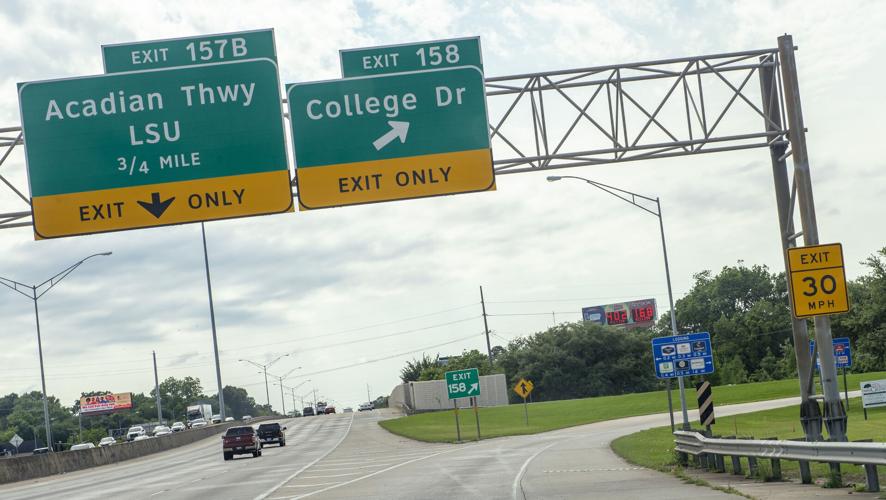 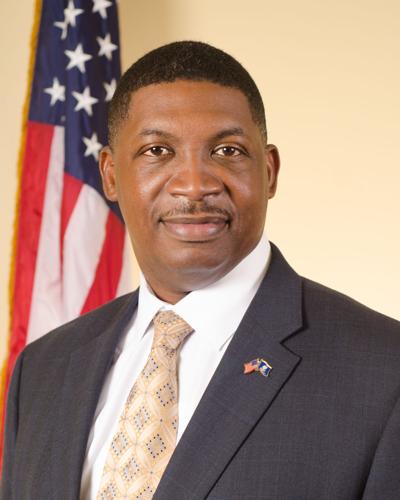 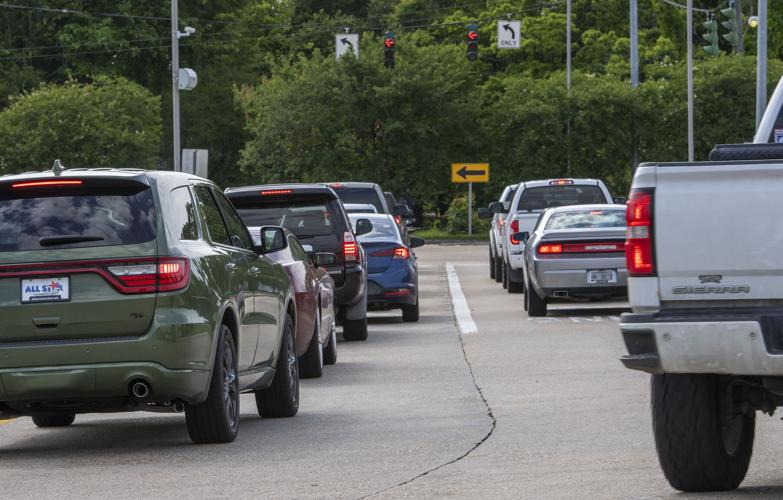 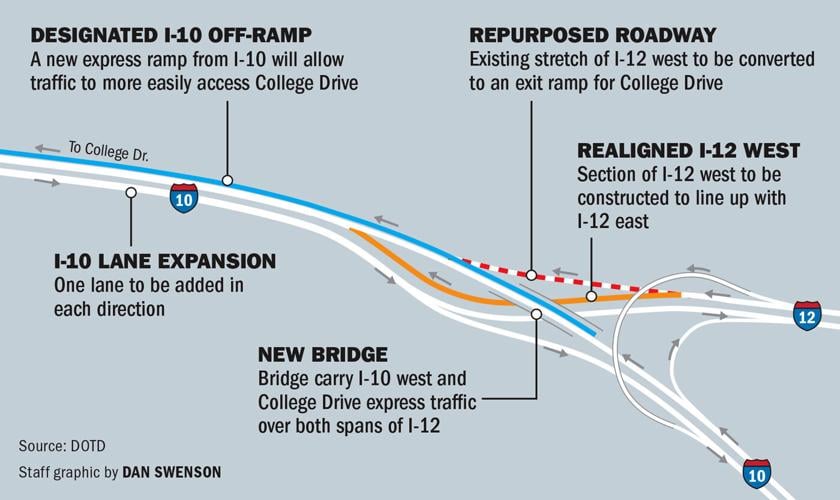 Plans for a new College Drive exit and I-10/I-12 split: State transportation officials broke ground Tuesday on a new exit for College Drive from Interstate 10 in Baton Rouge. The new design aims to remove the current exit to College, which requires drivers on I-10 to merge abruptly across several lanes of traffic.

Plans for a new College Drive exit and I-10/I-12 split: State transportation officials broke ground Tuesday on a new exit for College Drive from Interstate 10 in Baton Rouge. The new design aims to remove the current exit to College, which requires drivers on I-10 to merge abruptly across several lanes of traffic.

Four-day workweeks at 10 hours per day for state employees are being considered to reduce traffic during the widening of Interstate 10 in Baton Rouge, state officials said.

"We just want to make a dent in the volume of traffic that is coming and going during the construction window,” said Shawn Wilson, secretary for the state Department of Transportation and Development.

Staggered work shifts and working from home one day per week are other options under review.

The state has cleared a key hurdle for the widening of Interstate 10 between La. 415 and the I-10/12 split, Louisiana transportation chief Sha…

The I-10 widening includes adding a new lane in both directions between La. 415 and the Interstate 10/Interstate 12 split, replacing the bridge over the City Park Lake and revamping the exit at College Drive for westbound motorists.

Nearly 154,000 motorists use the bridge daily over City Park Lake.

Even without a massive construction project, I-10 is the site of daily backups, especially during morning and evening commute times.

The heavily traveled stretch will be trimmed from three lanes to two for months at a time, which is why finding ways to lessen the number of cars and trucks is a priority.

Arches and pelicans will be the themes of the new bridge on Interstate 10 across City Park Lake, state officials announced Monday.

“If we reduce the workforce by 20% in state government five days per week, you will have full coverage of state services and the benefit of traffic reduction,” he said.

Up to 8,000 state employees who work downtown could be affected by the traffic measures. Exactly which state agencies would be impacted and how is unclear.

Specifics of the work schedules would be left to individual offices.

City-Parish employees could also face changes in their work routines.

Think Baton Rouge traffic is worse? It is not your imagination

Traffic problems that plague the Baton Rouge area in the best of times have gotten worse since Hurricane Ida, officials said Tuesday.

“Many departments in City-Parish currently allow for flexible work schedules, and we will continue to look at options as we get closer to the project,” Armstrong said.

The widening work could begin in late 2023, with the heaviest impact on traffic lasting 12-14 months.

Private employees who work downtown could also be affected by the moves.

“We would want everybody to participate in this congestion reduction effort so we can provide some benefits to the public,” Wilson said.

Commissioner of Administration Jay Dardenne touched on the issue during a budget presentation to the Louisiana Board of Regents on Sept. 21.

Dardenne said his office earlier committed to DOTD that it would consider staggered four-day workweeks to reduce traffic.

“Basically the numbers are staggering as to how much money and time it saves if we can knock down the traffic flow in the interstate,” Dardenne told regents.

He said crafting one new temporary lane instead of two “has a multi, multi-million dollar impact.”

Jacques Berry, a spokesman for Dardenne, emphasized that no final decisions have been made.

Wilson said four-day work weeks are not uncommon at DOTD.

Other ideas under review include asking LSU to tweak class schedules to reduce traffic; redirecting some eastbound traffic entering Baton Rouge to U.S. 190 rather than I-10 and setting up “park and ride” stations for westbound commuters headed to Baton Rouge from Ascension Parish.

Officials said one advantage of the possible changes is the fact work schedules have been in flux for the past 18 months because of the coronavirus pandemic.

Lots of state workers are spending only a few days per week in offices.

“That is the benefit of this exercise with COVID,” Wilson said.

This I-10 change is going to mean massive traffic jams in Baton Rouge: 'It's going to be a pain'

The work is scheduled to start in 2024 and last about a year.