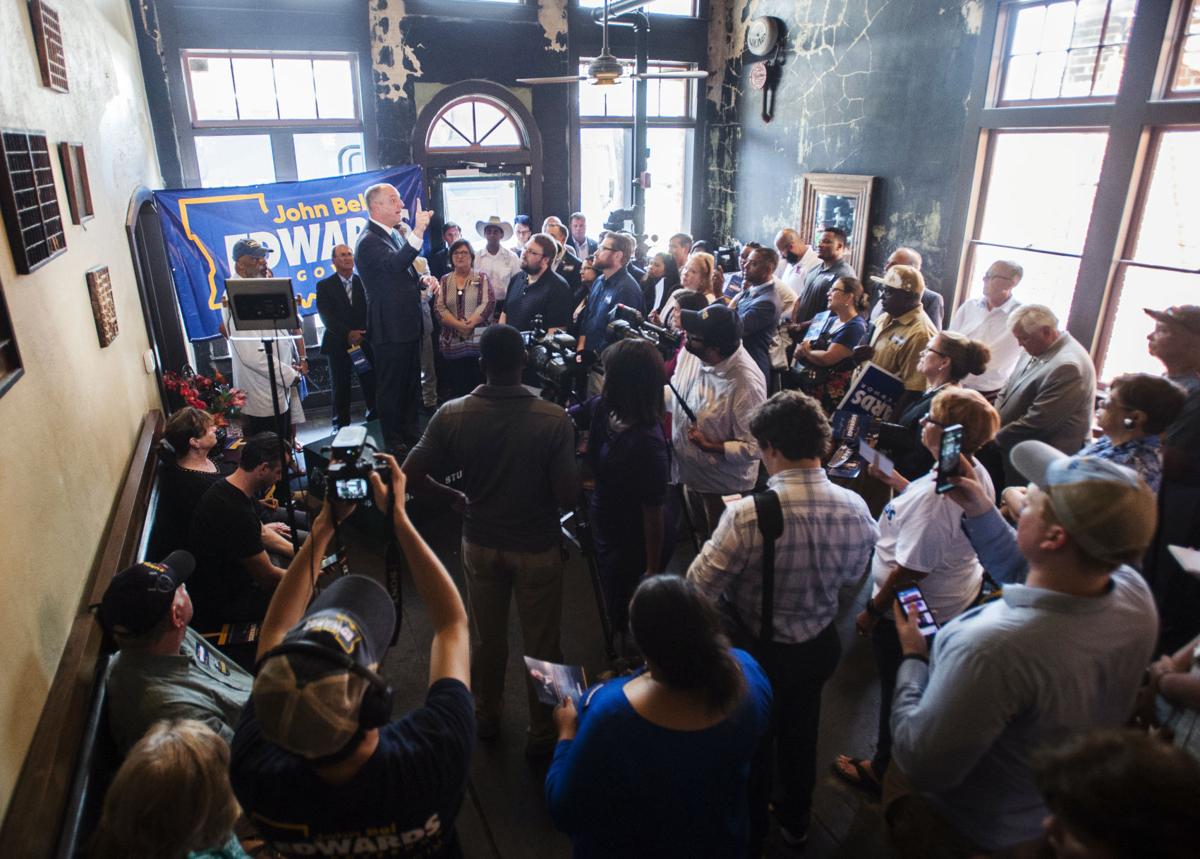 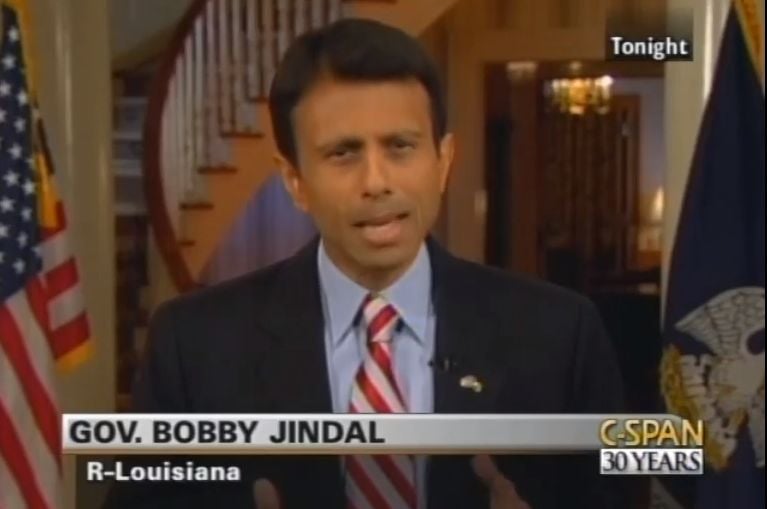 Then-Gov. Bobby Jindal delivers the GOP response to then-President Barack Obama's address to Congress in 2009. Jindal, then seen as a rising star in the Republican Party, was widely mocked for the speech.

Then-Gov. Bobby Jindal delivers the GOP response to then-President Barack Obama's address to Congress in 2009. Jindal, then seen as a rising star in the Republican Party, was widely mocked for the speech.

Bobby Jindal has been largely absent from Louisiana politics since ending an ill-fated presidential bid in 2015 and leaving office as governor a couple months later. Although he writes a regular column in The Wall Street Journal and has become a semiregular Twitter user, he mostly opines about national issues, not his home-state politics of the day.

But the state’s most powerful Democrat is working hard to bring Jindal back into the spotlight during the governor’s race this year.

At campaign rallies, in scrums with reporters and in a statewide television advertisement, Gov. John Bel Edwards is bringing Jindal to the forefront of his reelection campaign, as the race gears up ahead of an Oct. 12 primary election.

Often referring to “my predecessor,” and sometimes calling out the former Republican governor by name, Edwards has hammered Jindal on a wide range of issues as he tries to sell his first term to voters. Jindal left the state a $2 billion budget deficit, Edwards points out. Jindal refused Medicaid expansion and cut higher education. He left the economy in “shambles,” the governor says.

“It was just an absolute disaster,” Edwards said after a campaign event at the French Press, a popular breakfast and lunch spot in Lafayette. “So people need to compare and contrast where we are today with where we were then. And that's how they're going to make an informed decision on who they're going to vote for so we can continue to move forward and not go backwards."

The contours of the governor’s race have quickly taken shape in recent weeks. Edwards has gone on TV with a statewide ad contrasting his administration’s handling of the budget to that of Jindal. The Republican Governors Association responded with an attack ad that brought another Republican into the fold, President Donald Trump, arguing Louisiana is being left behind in the nation’s ongoing economic recovery.

Jindal has emerged as a key figure in Edwards’ strategy to win reelection as the only Democratic governor in the Deep South. While the Republican challengers want to make the race a referendum on Edwards, the governor is trying to make the election about a simply binary choice: Vote for me, or go back to the Jindal days, said Ed Chervenak, a longtime political scientist at the University of New Orleans.

“The burden my opponents have is they literally have to try to convince people they were better off in 2015 than they are today,” Edwards said during a sweltering late-afternoon stump speech in Lake Charles. “They can’t do that. People are not that stupid. They know they are better off today.”

Gov. John Bel Edwards took to the stump Tuesday in Lafayette to lay out a stark choice for voters in the governor's race this year, as battle …

Once a rising star in the Republican Party, Jindal left office historically unpopular in Louisiana, as he spent many of his waning days in office campaigning for president and, before that, had made a “no tax” pledge to Grover Norquist, a conservative D.C. political activist, that handcuffed how he could deal with a faltering budget. A poll commissioned by The Advocate and WWL-TV in 2015 found Jindal was pegged as the worst Louisiana governor, compared with the most recent six state executives. It was not close.

Jindal's handling of the state budget was widely criticized by the Republican candidates for governor in 2015 as well as by Edwards.

A spokesperson for Jindal did not return multiple calls for this story.

Standing on a wooden box labeled "JBE stump" that traveled with the governor's campaign during an RV tour of the state last week, Edwards excoriated Jindal. He chastised the Republican's decision not to expand Medicaid, the cuts to state colleges during his eight years in office and his budgeting practices, which included raiding one-time money for annual expenses. Edwards' Republican opponents have not come to Jindal’s defense.

In response to the Republican Governors Association attack ad, Edwards argued Louisiana, and its economy, are better off than they were four years ago — ”the last time we had a Republican governor.”

“I know that hurts the feelings of the Republican Governors Association, but it is a fact,” an animated Edwards said.

Pearson Cross, a political science professor at the University of Louisiana at Lafayette, said he thinks the message will resonate with voters. Jindal’s tenure is not too distant a memory, and polling suggests Jindal is still “not very well regarded” in Louisiana.

However, “it will have no resonance after the 2019 election,” Cross said. “This is the last hurrah for running against the misdeeds of Bobby Jindal.”

Cross said Edwards will do well to keep the focus on comparing Louisiana’s current state of affairs with where it was four years ago, when state budget shortfalls resulted in regular news headlines about rising tuition and potential hospital closures. He needs to keep the focus off of tax increases or why Louisiana is still at the bottom of many lists, which his Republican opponents are already highlighting.

After going through multiple painful special sessions and facing repeated budget shortfalls in his first two years as governor, Edwards reached a deal with the GOP-led Legislature last year to keep intact part of a temporary sales tax increase as the cornerstone of a plan to shore up the state budget. This year, lawmakers used the state’s surplus in funding to increase spending on early childhood education and colleges, and to give teachers and school support staff a pay raise of $1,000 and $500, respectively.

Edwards’ Republican opponents, U.S. Rep. Ralph Abraham, of Alto, and wealthy Baton Rouge businessman Eddie Rispone, are taking aim at that tax increase. They have highlighted Edwards’ pledge during the 2015 election campaign that he would not raise taxes. Abraham’s campaign has repeatedly called that a “lie.”

“Of course John Bel talks about Bobby Jindal,” Abraham said in a statement. “He needs someone to blame for three years of broken promises, higher taxes, and flat out lies. He says that he inherited a budget deficit from Jindal. That's a lie. He voted for nearly all of Jindal's budgets. He didn't inherit anything — he created it. When I'm elected governor, I won't blame him for the mess I'll inherit. We'll just fix it."

Before becoming governor, Edwards was a Democratic state representative from Amite, and he voted for five of the eight final budget bills that became law during Jindal’s tenure, according to legislative records.

To fight back, the governor is casting his handling of the repeated budget shortfalls as a “balanced” approach, which included tax hikes, budget cuts and savings. It needed, and won, bipartisan support to get through the House and Senate, which are both controlled by Republicans.

Aside from Jindal, there’s another Republican figure that voters will hear a lot about during the governor’s race: Trump.

Rispone, a businessman who loaned his campaign more than $10 million, has not-so-subtly compared himself to Trump at every pass. His first digital spot, which went up recently, is dedicated entirely to the president and refers to Rispone as a “strong Trump supporter.”

“President Trump, his policies are phenomenal,” Rispone says in the ad. “We just have to support him in every way we can and be outspoken about it.”

Republicans have also speculated that Trump could make an appearance in Louisiana ahead of a Nov. 16 runoff, which will become necessary if no candidate wins more than 50% of the votes in the October primary.

Abraham, who has led Rispone in the polls so far, told the president recently he “couldn’t wait for him to come to Louisiana and get involved in the race.”

“Our campaign talks to the White House every week,” Abraham said. “I can assure you they are all in on taking this seat back.”

Trump has not spoken publicly about the race but privately urged U.S. House Minority Whip Steve Scalise to run for governor during a recent flight on Air Force One en route to Louisiana, according to a report from Axios.

In a state Trump won with 58% of the vote in 2016, even the Democratic governor has played up his ability to work with the president. Edwards, at a campaign event in New Orleans recently, said he “worked extremely well” with both the Barack Obama administration and the Trump administration. He’s been to the White House nine times to meet with Trump or Cabinet members, he said.

“I look forward to continuing to work with Mr. Trump in my second term,” he said.