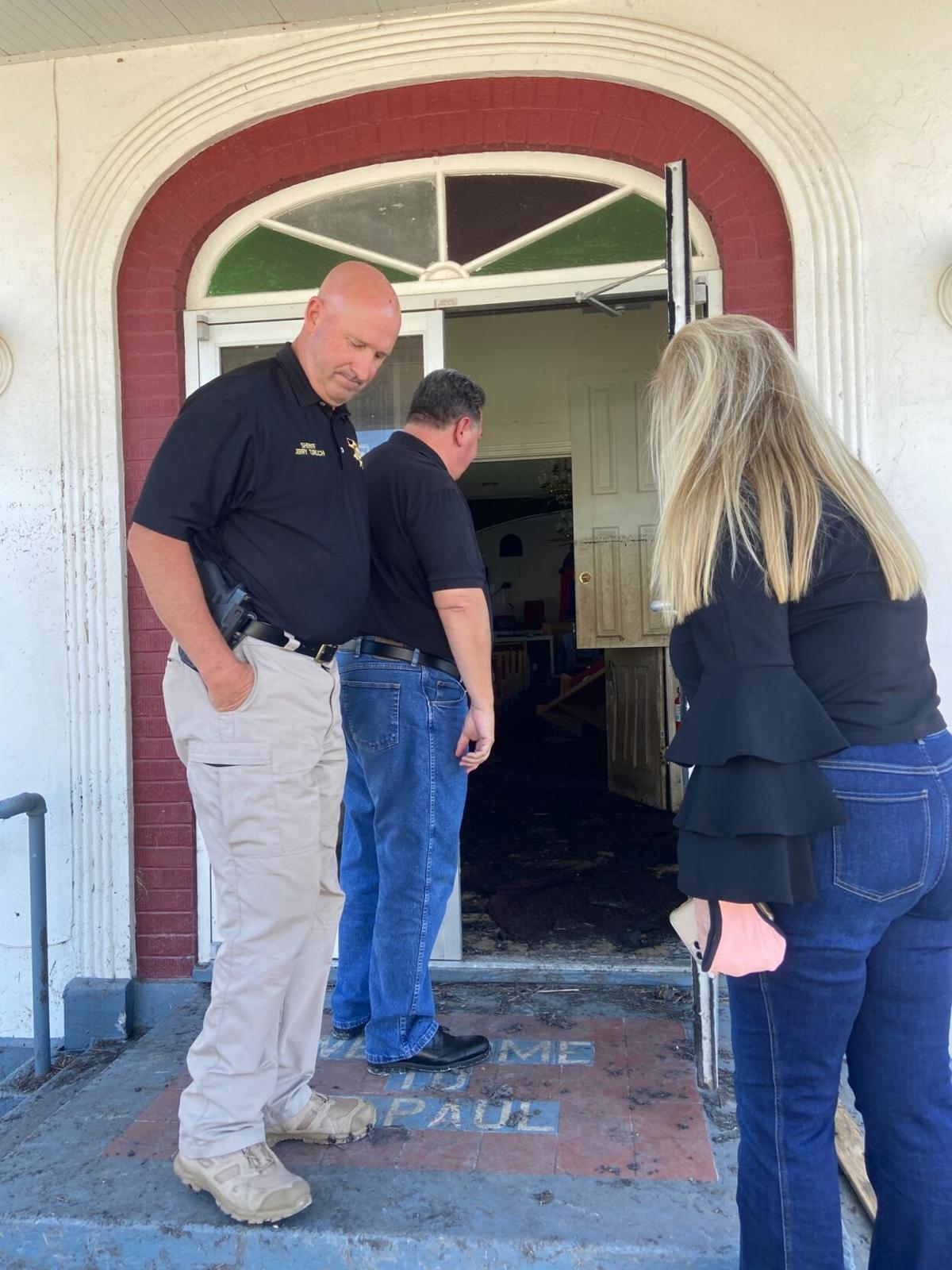 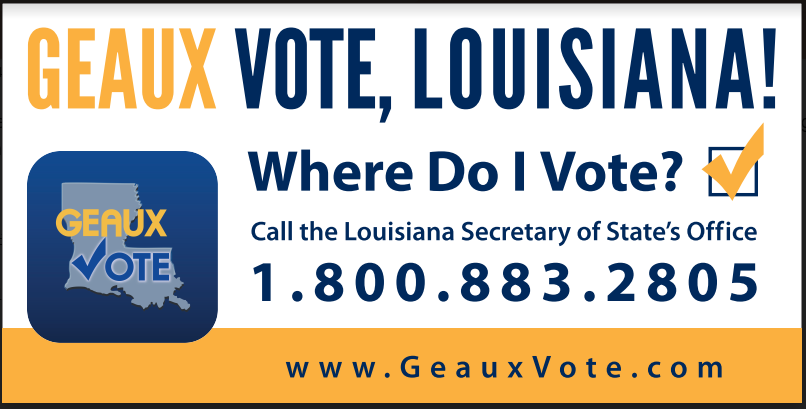 The Secretary of State's Office is erecting this metal sign to help voters in all the parishes impacted by Hurricane Ida.

The Secretary of State's Office is erecting this metal sign to help voters in all the parishes impacted by Hurricane Ida.

Storm water had moved a tomb near the front door. When the door was opened a snake slithered out from the accumulated marsh grass.

Jumping out of the way, Secretary of State Kyle Ardoin’s only thought was “nope.”

St. Paul Baptist Church, a Plaquemines Parish precinct polling station, wouldn’t be used for voting in the Nov. 13 election. A new location would have to be found.

During his four-day tour of 11 storm-ravaged parishes, Ardoin found that 34 of Terrebonne Parish’s 77 precincts would have to be moved, nine of St. Charles’ 41 precincts, 28 of Jefferson’s 273 precincts, several in St. Helena Parish and every one of Lafourche’s “down the bayou” 10th Ward voting locations had been destroyed or damaged.

Gov. John Bel Edwards ordered the delay of upcoming elections that featured important Constitutional questions statewide and the renewal of a …

Each precinct averages 815 registered voters. That’s more than 100,000 voters impacted, about a third of those registered, and the count is still rising.

More precincts in Orleans, Tangipahoa and St. John the Baptist parishes will be moved once the local governing authorities, later this week, pass the necessary ordinances to do so. Only Livingston Parish’s traditional polling places survived enough to be usable.

“Logistics have been the most difficult part,” Ardoin said.

Suitable replacement locations have to large enough to handle multiple precincts with plenty of space for social distancing – there’s a still a pandemic – parking, power, shelter, adequate supplies and not too far away from the locations voters are used to going.

But that’s just one hurdle to staging a successful election.

By the end of the week election commissioners, many of whom evacuated, will have to be named. Meanwhile, the deadline to register in person or by mail is Wednesday. Afterwards wannabe voters will have to register online before October 23. Early voting starts in less than three weeks on Oct. 30.

The Nov. 13 election, which originally was supposed to be this weekend, is pretty much a primary for every significant local government post in New Orleans. Voters will be choosing a mayor, sheriff, assessor and the entire city council plus other local posts.

Scattered across the state are contests for aldermen, judges and police jurors, as well as tax referendums – like renewal of property tax millage that funds the bus system in Baton Rouge.

Mark Ballard: Some surprises on Louisiana's path of postponed elections of the past

Along with tossing out spoiled food and mucking out saturated Sheetrock, another hallmark of a major Louisiana storm is postponing elections.

For most of the state’s 3 million registered voters, however, the ballot contains four Constitutional amendments, two of which promise sweeping changes to the system that levies and collects taxes.

Ardoin said he wasn’t expecting a large turnout – maybe 15% statewide, 35% in New Orleans – even before the storm.

Hurricane Ida came ashore Aug. 29 with 150 mile-per-hour winds at Port Fourchon and kept much of its strength as it traveled north over 30-mile-wide wetlands between Cut Off and Houma.

Lafourche Parish Registrar of Voters Michael R. Boudreaux’s satellite office in Cut Off, maybe 50 yards from the bayou and two miles from Ida’s wetlands route, is unusable. But the parking lot along with another at the nearby library are large enough to handle voters, under tents, who usually cast ballots at South Lafourche High School and the East Galliano Fire Station. The Golden Meadow precincts will all be able to vote at the Golden Meadow Middle School.

“We kind of put them (separate voting locations) together in the largest parking lots we could find and we tried to keep them on their side of the bayou,” Boudreaux said.

Commissioners will be posted at each usual voting station to direct voters to the new poll. That’ll be happening, by law, anywhere in the state a precinct has been moved.

The Secretary of State’s Office has three mobile voting stations that operate off generators. Lafourche is getting one and another is going to heavily damaged St. John the Baptist Parish on the Mississippi River, Ardoin said, adding that the third will be placed soon.

Our Views: An election delay good for voters, hard-pressed by Ida

If the Election Day scheduled for Oct. 9 was not the biggest one that Louisiana has ever seen, it still was an important one — with municipal …

“Our main concern is communications,” said Ashley Shelton, president of the Power Coalition for Equity and Justice, a New Orleans-based community involvement group that emphasizes voting statewide. The nonprofit is pitching in by reaching out to voters with the latest news, particularly at the hot meal stations set up in the storm zone.

“Confusion is part of what happens whenever you move elections in the first place,” as Gov. John Bel Edwards did when ordering postponement of the Oct. 9 polling to Nov. 13. “This just makes it harder,” she added.

Plans, however detailed, inevitably develop problems. For instance, local officials have been mailing absentee ballots as well as the changes in polling stations, and other information. But mail carriers can’t deliver to homes without mailboxes, which has not been a priority for people living in tents and their cars because their homes are so severely damaged.

Ardoin’s task force is talking to the U.S. Postal Service continuously, making sure local mail carriers are aware of absentee ballots. If voters aren’t receiving mail at home, they’re being instructed to go to the post office.

His office is erecting large metal signs throughout the effected parishes with 1-800 numbers to get information, printing posters, handing out fliers, and will start advertising on local radio this week.

“We’re trying to cover all our bases,” Ardoin said.

Terrebonne Parish Registrar of Voters Rhonda Rogers spent the six hours Ida pummeled Houma hunkered down in her home. But her mind kept going back to her office.

She and staff had moved the ballots and early voting machines as high as they could in her Government Tower office that is about football field’s length from Terrebonne Bayou.

After the storm passed, her office had damage, no electricity, no phone service and staffers scattered across several states. The ballots and voting machines were safe.

But she had to contend with the long list of necessary and often legally required tasks to put on an election.

“We’ll all come back, officially, full time on Monday. But we’ve been working non-stop since the storm. Now, we have to communicate what voters need to know so they can participate,” Rogers said. “I’m sure we’ll pull off this election without any major issues.”

Important Dates for the Nov. 13 Election

Important Dates for the Nov. 13 Election

Garey Forster: As tough issues pile up on City Hall steps, is this year's election relevant?

Emails from readers of my column run the gamut from harsh criticisms to kind compliments, and sometimes, they pose fascinating questions.