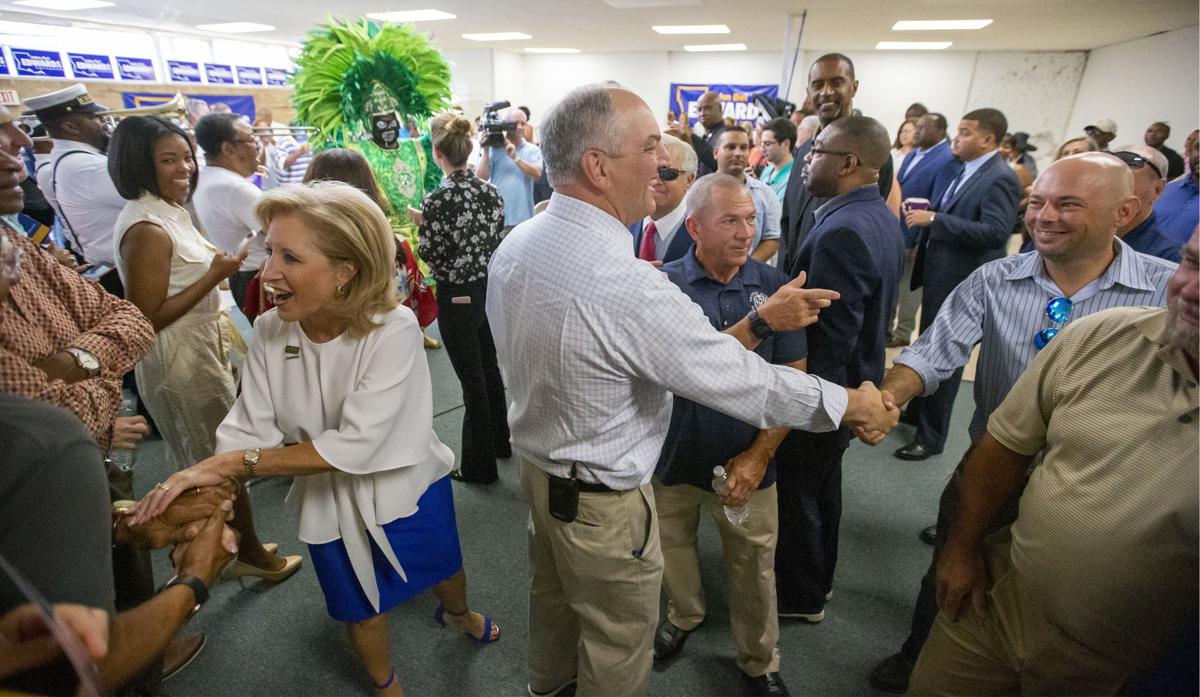 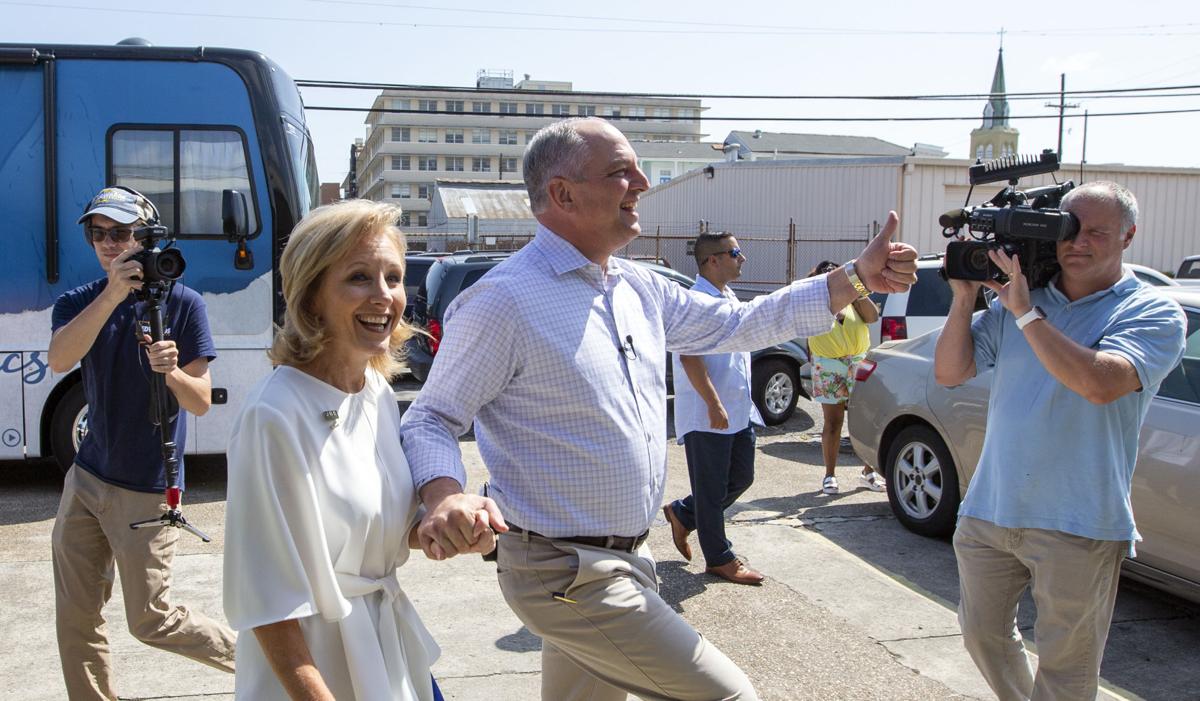 Louisiana Gov. John Bel Edwards and his wife, Donna, arrive in a RV during a for re-election campaign stop at 1516 Thalia Street in New Orleans, La. Monday, July 8, 2019. 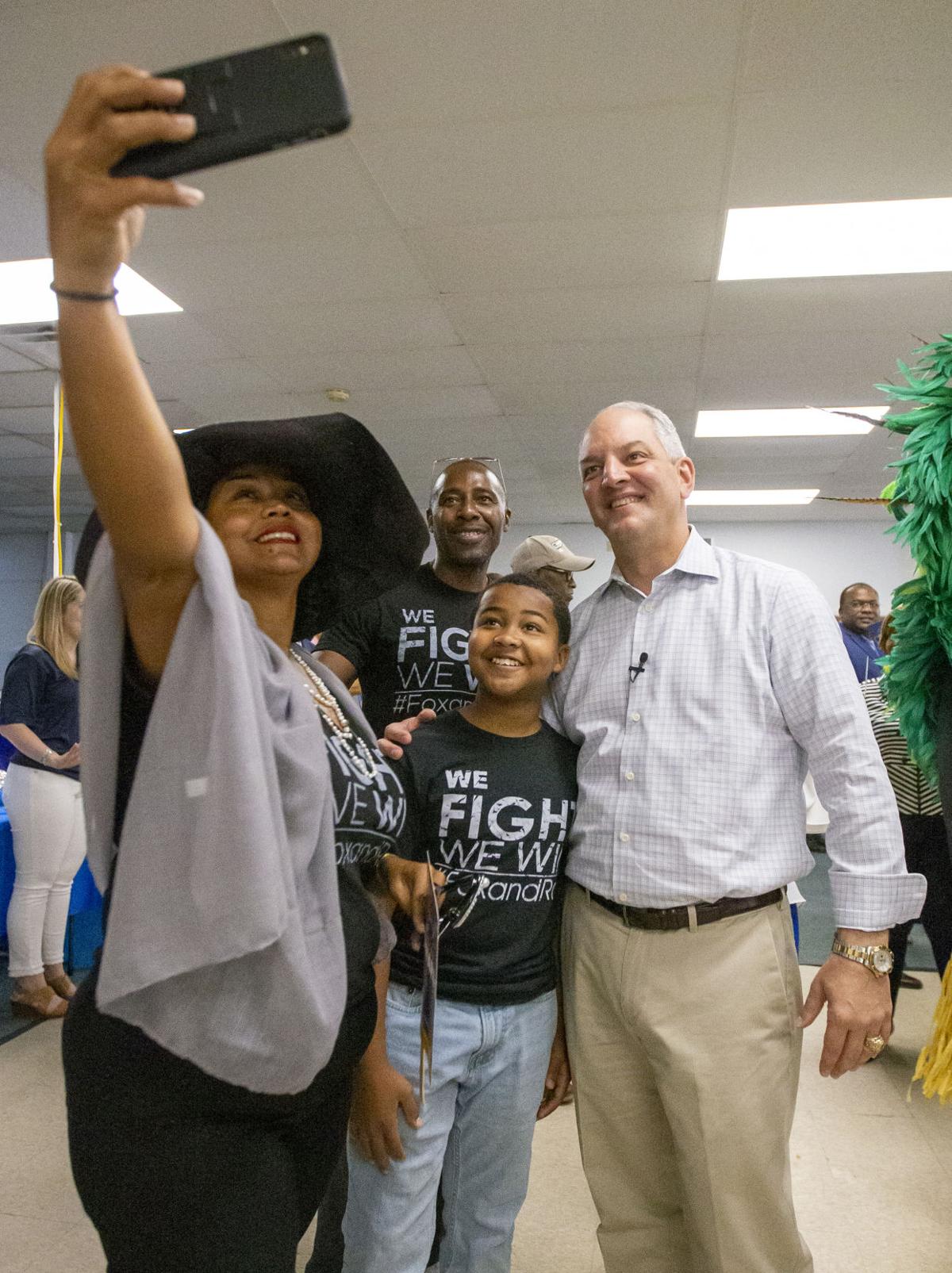 Louisiana Gov. John Bel Edwards and his wife, Donna, arrive in a RV during a for re-election campaign stop at 1516 Thalia Street in New Orleans, La. Monday, July 8, 2019.

His Republican opponents – Eddie Rispone and Ralph Abraham – hit back at Edwards on taxes, and the Republican Governors Association prepared to begin airing its first ad of the campaign with a focus on the governor's economic record, according to the RGA.

“The political season is on us, no doubt,” Edwards said in an interview after he offered a spirited case on why he deserves another four years in the Governor’s Mansion, as his statewide RV tour made its second stop, in New Orleans on Monday.

Edwards touted how the state has gone from a budget deficit to a surplus since he became governor in January 2016, how he provided Medicaid to 450,000 working Louisiana residents and how teachers are getting now their first pay raise in a decade.

“We have transformed our state,” Edwards told an enthusiastic crowd at his campaign headquarters. “Think back to where Louisiana was four years ago. The state was in a ditch.”

The campaign said it spent seven figures on the ad, which will run in heavy rotation on TV and digital platforms.

The 30 second spot, titled "Surplus," contrasts the $2 billion budget shortfall Edwards inherited when he took office with a budget surplus that let lawmakers give pay raises to teachers this year, among other things. The governor and a bipartisan coalition of lawmakers stabilized Louisiana's finances with a sales tax hike and tax increases on beer, alcohol and cigarettes.

"Four years ago, Bobby Jindal left Louisiana in crisis," the narrator of the ad says. "But under Gov. Edwards' leadership, we've turned that deficit into a surplus."

The governor's campaign said it intends to stay on television through the Oct. 12 primary, where the governor hopes to reach above 50% and avoid a runoff. If no candidate wins more than 50% in the primary, the top two vote-getters will advance to a runoff on Nov. 16.

Edwards' campaign has consistently tried to contrast the governor with Jindal, who left office unpopular in Louisiana on the heels of a failed presidential bid. The ad also noted the teacher pay raise, approved by a bipartisan coalition of lawmakers.

As the only Democratic governor in the Deep South, Edwards faces a tricky bid for reelection in a state that has trended Republican over the past decade.

Rispone, a co-founder of the industrial firm ISC Constructors, has lent his campaign more than $10 million, leaving him with $10.5 million in his campaign account as of April 1, the date of the latest campaign finance report, while Edwards had $10.2 million.

Abraham has lagged in the funding race, with only $1 million in his account as of April 1. But two well-known Republican donors, Boysie Bollinger and Joe Canizaro, recently said they would help him raise money in the race.

The next campaign finance reports are due by July 15 through fundraising activity thru July 1.

Edwards began the day in New Orleans by appearing on the morning shows on WVUE-Fox 8 and WWL-TV.

He drove to his campaign headquarters in the Lower Garden District in an RV with his name and image emblazoned on the side.

The Kinfolk Brass Band greeted Edwards with the New Orleans standard, “Iko Iko,” as he and his wife Donna descended from the RV. The Zulu Tramps added New Orleans flavor.

Standing on a blue stump box, Edwards told the crowd that under his watch, the Legislature passed 10 bills that have ended Louisiana’s status as the nation’s biggest jailer on a per capita basis.

He noted that he and lawmakers this year increased spending on early childhood education by $20 million, and he said further expanding this program would be his biggest priority if he wins re-election.

“This is how we will finally close the achievement gap in education,” Edwards said. “We have too many kids starting kindergarten who are not ready to learn.”

Afterward, Edwards appeared on WWL-radio with host Newell Normand, who as the sheriff of Jefferson Parish endorsed him four years ago against then-Sen. David Vitter. Edwards had lunch at Mandina’s and then drove to Houma for another campaign appearance and a fundraiser.

Rispone, who is last in polls, hit Edwards in a tweet.

“Gov. Edwards is bragging about raising billions in taxes. While the rest of America is thriving under @realDonaldTrump, Louisiana is dead last because of the failed leadership from liberal @JohnBelforLA. President Trump cut our taxes, but Edwards raised them by billions.”

Abraham, who is in second place in polls, also criticized Edwards while speaking by phone on WWL-TV.

Abraham said he would lower taxes if elected governor but provided no details on who would benefit and whose programs would be cut.