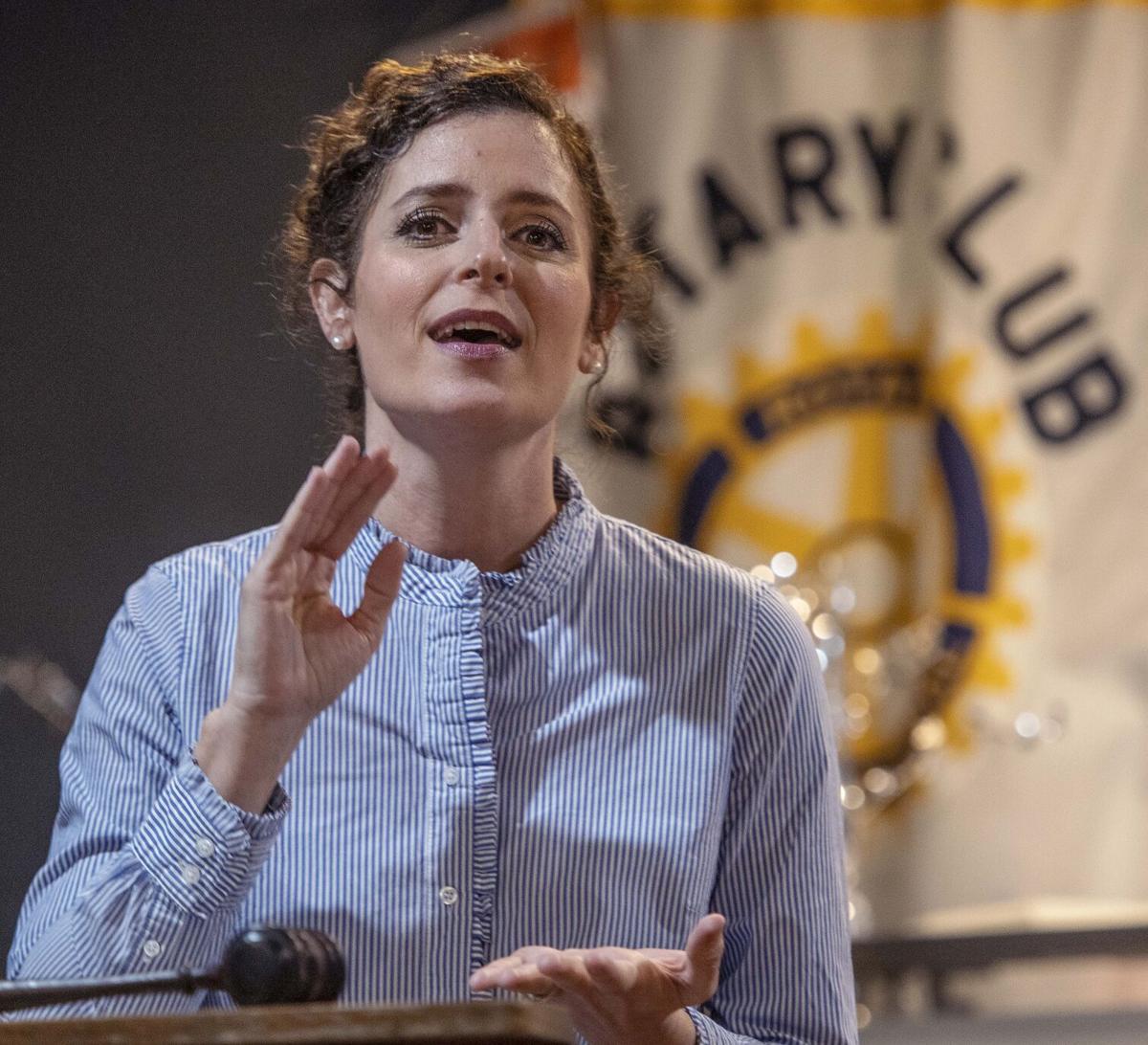 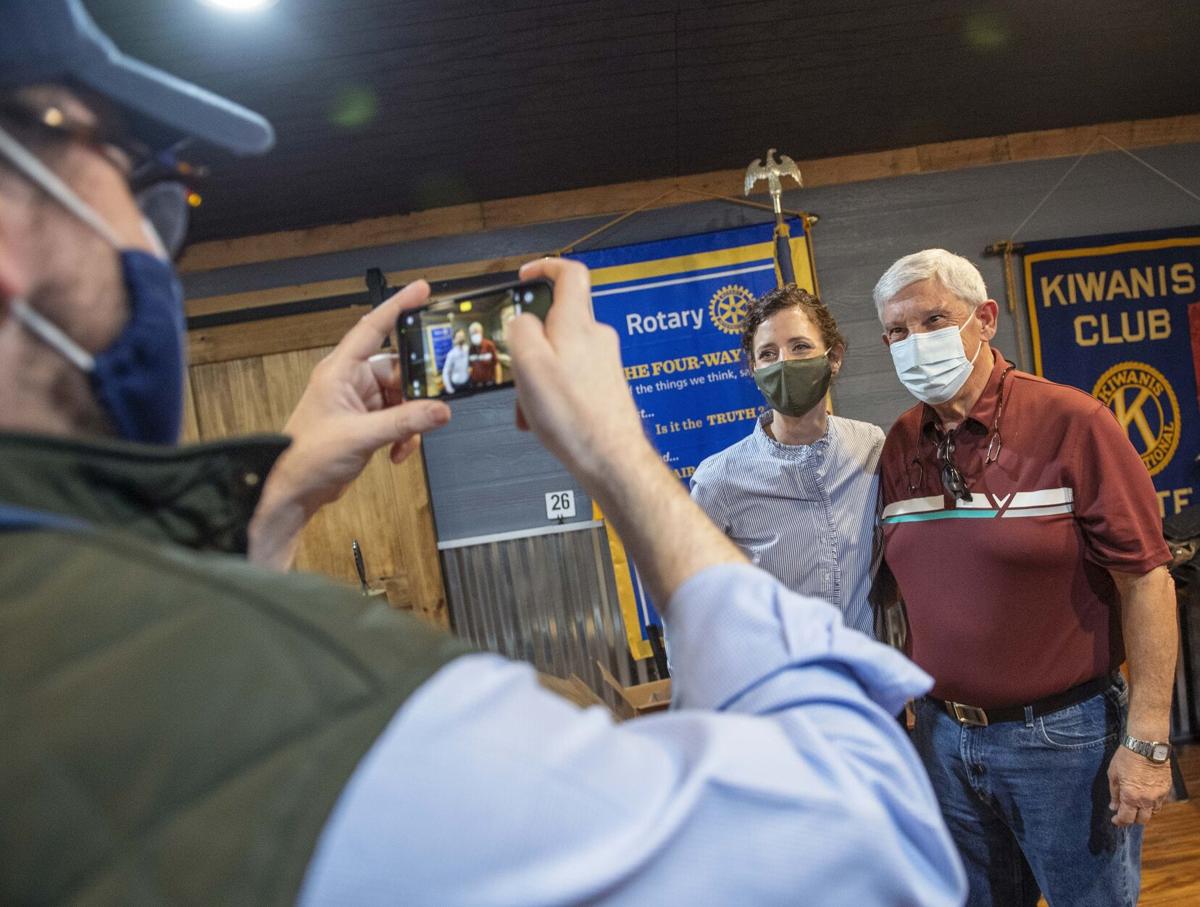 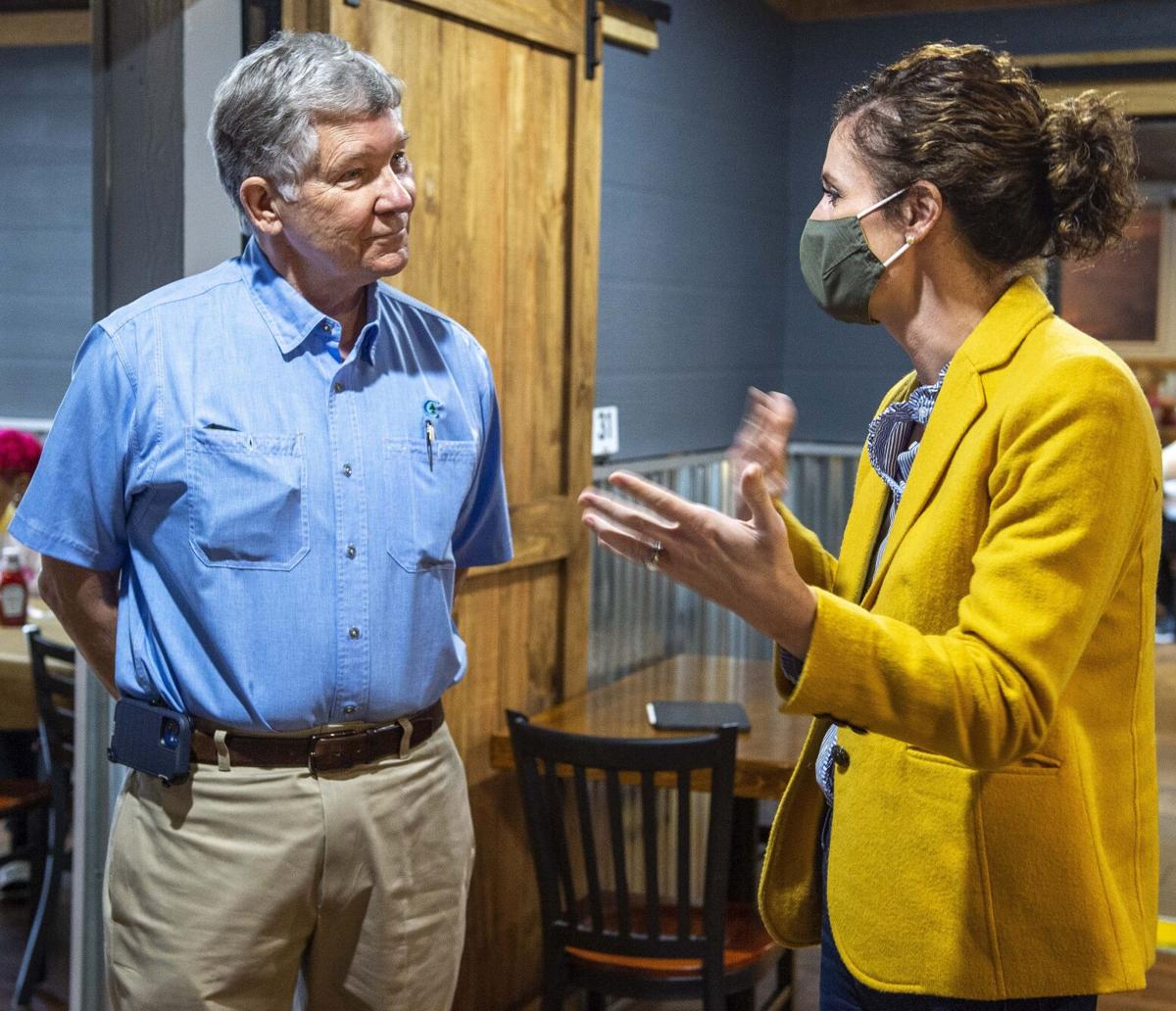 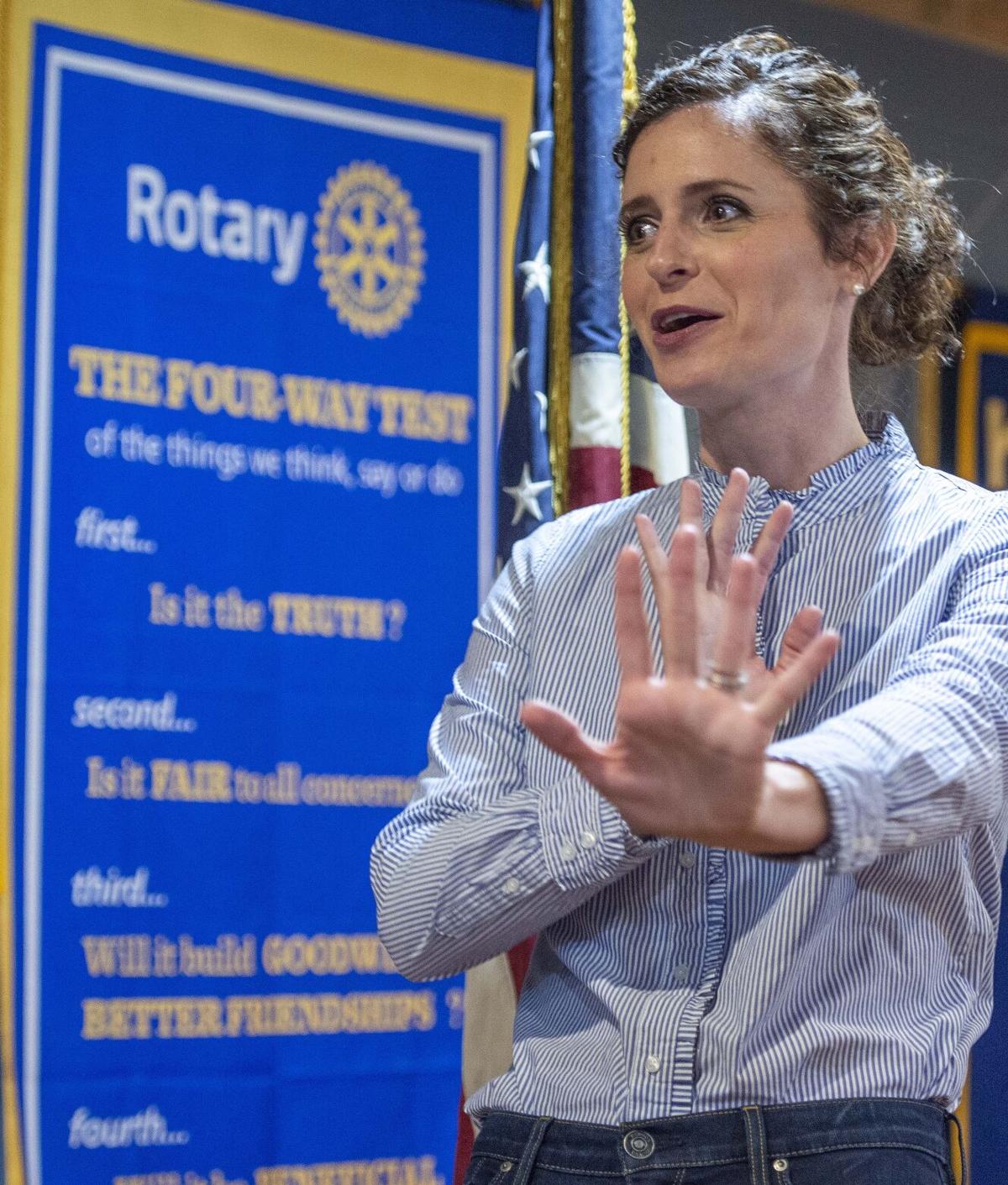 Julia Letlow had just begun processing the Dec. 29 death of her husband, Congressman-elect Luke Letlow, from COVID-19 complications when she was confronted with a monumental decision.

Would she run for the vacant seat in a mostly rural congressional district that her husband had just won?

Half a dozen male Republican elected officials were eying the race. Meanwhile, Letlow would face questions about whether a single mother with two toddlers could handle the constant travel to Washington and throughout the 24-parish district, which sprawls from Monroe to Alexandria, from Opelousas to St. Francisville to Bogalusa.

Letlow announced her decision on Jan. 14. She would run “to pick up the torch that my husband left behind,” as she explained it Tuesday to members of the Amite Rotary Club.

“I’ve never been more sure about a decision since the day I married Luke,” Letlow said in an interview afterward. “I’ll go back to my faith. I needed to have that peace that this was the right decision moving forward. I’ve never felt more ready, more equipped, more determined to serve.”

Now, Letlow is heavily favored to win the 5th Congressional District seat, either outright in the March 20 primary or in the April 24 runoff.

State legislators designed the district a decade ago to elect a Republican such as Letlow. Her husband cruised to victory in the Dec. 5 runoff, winning 62% of the vote. He died at 41, only days before he was supposed to take his seat in Washington, from a heart attack while receiving treatment for COVID-19.

Julia Letlow, who will turn 40 on March 16, seems well positioned to run. She grew up in Monroe, has a Ph.D. in communication from the University of South Florida, and was a finalist to be president of the University of Louisiana at Monroe last year while serving as a university vice president. She knows the district well through her husband’s work as chief of staff for former U.S. Rep. Ralph Abraham, and from his campaign to succeed Abraham, who retired last year.

Reporter's notebook: Luke Letlow, killed by the coronavirus, though he was a cautious campaigner

On Wednesday, former President Donald Trump announced his support for her.

“I want to get results for the 5th District,” she told the Rotarians in Amite. “I will work with anyone who will help me get results. I don’t care what aisle I have to cross over.”

The district includes the soybean, cotton, corn and rice farms of northeast Louisiana, the cattle ranches and timberland of central Louisiana and the dairies of the Florida Parishes. Many of them depend on federal price supports to one degree or another.

The district is home to Grambling State University, Louisiana Tech and the University of Louisiana at Monroe and also to Lumen, a Fortune 500 company previously known as CenturyLink. Pentecostal churches dot the district, with a concentration along Interstate 20 in the north.

In a 12-candidate field, the best known Democrat in the race is Candy Christophe, a 53-year-old social worker and addiction counselor in Alexandria. She won 16.41% of the vote in the Nov. 3 primary last year, falling 429 votes short of winning a spot in the runoff against Luke Letlow.

“We need jobs and affordable health care,” said Christophe, who has the endorsement of the Louisiana Democratic Party.

Christophe said she would have voted for the Biden administration’s $1.9 trillion economic relief package that passed the House on Wednesday and became law with the president’s signature on Thursday. Not a single Republican supported the measure.

Christophe said she supports expanding health care through the Medicare for All program championed by Sen. Bernie Sanders, of Vermont. She wants “to make sure we are able to transition our people into clean jobs,” but does not explicitly endorse the Green New Deal plan championed by U.S. Rep. Alexandria Ocasio-Cortez, of New York. And she says she would have voted to impeach Trump in January.

“I believe he caused the (Jan. 6) insurrection,” Christophe said. “I believe he was instrumental in gathering people to gather at the Capitol and overthrow the government. If President Obama had done the same thing, I would have voted the same way.”

Another Republican candidate is Allen Guillory, who owns a trucking company in Opelousas and won 7% in last November’s primary.

“I want to help get our economy moving again,” Guillory said. “Our farmers are struggling. Our kids have to get back to school.”

Letlow was introduced at the Rotary Club luncheon at Mike’s Catfish Inn by a man who told a joke first: “Did you hear about the guy who was hit by a can of soda? He was lucky. He was hit by a soft drink.”

Letlow joined the rest of the crowd in laughter.

Tall and thin — she was a state long jump champ in high school — Letlow took a spot behind the podium. Having taught public speaking, she was comfortable talking to the crowd, despite being a first-time candidate for political office.

Letlow talked about her steadfast religious faith and how she had been tested before. Her brother Jeremy died at 17 in a car accident when she was a junior at the University of Louisiana at Monroe.

“That tragedy was really hard to walk through,” Letlow said. “But I find what I do, whenever I’m faced with trials and hard times, I dig into literature and research.”

But she found little to read for siblings who had lost a brother or sister, so she decided to fill that gap by making it the subject of her doctoral dissertation. “Giving Meaning to Grief,” she titled it.

She sees what she went through with her brother’s death “as preparing me for such a time as this,” she told the Rotarians.

Letlow moved on to her priorities: improving education; fixing roads, bridges and sewer systems through a massive federal infrastructure bill; making sure that farmers receive the aid they need from the government; and expanding broadband internet service in rural areas.

Her call for government intervention in the economy made her sound something like a Democrat, but no one in the crowd raised any concerns in their questions.

One man, who seemed dismissive of politicians, asked whether she supports term limits.

Letlow said she did, but would not limit herself to a set number of terms as Abraham had done, retiring after he finished his third term last year.

“The way the swamp is set up now, it’s all about seniority,” she said. “If you term-limit yourself, then you don’t get those committee assignments and you can’t bring as many results back to the 5th District.”

Afterward, Letlow talked about Luke. They met when he was in ninth grade, and she was a grade lower at a different school, but they didn’t become high school sweethearts, she said. They reconnected later, broke up, reunited in 2012 and married the following year.

They had two children, Jeremiah, 3, and Jacqueline, 1. The kids live with their mother on a farm in Start, a town in Richland Parish just east of Monroe.

Guillory told the Monroe News-Star in January that the two children would suffer from her time away campaigning and in Washington if Letlow wins.

Letlow said she didn’t consider the comment to be sexist per se, but she also smiled and added: “I don’t think it’s a question often asked of men.” She noted, “It takes a village to raise children. I have parents on both sides.”

She said she would fight any plans to carve up her district when the Legislature meets later this year to redraw the congressional boundaries.

“If you redistrict this district, then the rural population would not be well represented,” she said.

Letlow was virtually the only person in the crowd at Mike’s Catfish Inn who wore a mask. She said she would prefer that everyone wore one, but she didn’t make it an issue.

She had received her first vaccine shot three days earlier.

“It was emotional,” Letlow said. “I won’t lie. Just thinking about its lifesaving capabilities. I wish it had been here a little bit sooner.”

Julia Letlow won a special election outright Saturday to represent the 5th Congressional District and will succeed her husband Luke, who captu…