After years of doing taxes the same way, Louisiana voters beginning Saturday are being asked to decide if the state should head in a different direction.

Forty-three parishes, like Orleans, are choosing local leadership or deciding propositions, like East Baton Rouge, which is seeking to renew a property tax that funds the local city buses.

But when early balloting begins Saturday for the postponed Nov. 13 elections, voters in all 64 parishes will be asked to decide four changes to the Louisiana Constitution. Early voting continues until Nov. 6.

One of the four amendments on the ballot would allow five levee boards to raise taxes. Another offers budget architects a little more flexibility to tap dedicated funds when revenues are down and the state budget needs balancing.

But the first two amendments are attracting the most attention and would start the ball rolling toward sweeping changes in the state tax system. One would lead to centralizing sales tax collections. The other would dump one hefty deduction while decreasing the income tax rates for individuals and corporations.

Most speeches and forums for the business community lately sell the importance of starting the process of unscrambling a far too complex system that hides the fact that Louisiana’s taxes aren’t as high as advertised.

At one forum last week, Michael L. Hecht, head of Greater New Orleans Inc. a regional economic development organization, trotted out a campy photo of astronaut Neil Armstrong on the moon with a Louisiana state flag. “It’s a small step as we said before, but it is a giant leap because it is moving us in the right direction,” Hecht said of amendments 1 and 2.

For literally decades, legislators have talked about the need to change Louisiana’s tax system but have done little other than proposing these two amendments that will tidy up language in the state constitution that then will allow for substantive changes that Hecht and others in the business community say will lead to more jobs.

Conservative radio talk show host Moon Griffon, on the other hand, told his listeners last week that the amendments are all window dressing to make the state look more pro-business.

“What they’re doing with this little bitty Amendment 1, Amendment 2, is tinkering. We’re tinkering with stuff,” Griffon said. “We don’t do anything with it.”

Amendment 1 would authorize a commission to handle collecting sales taxes and disbursing the proceeds to the proper jurisdictions, and would remove from the constitution the ability of local jurisdictions to collect their own sales tax.

Louisiana institutionalized sales taxes in 1948 — there had been an emergency tax during World War II — that allowed the state to charge a certain amount on sales at the cash register, which right now is 4.45% of every dollar. Additionally, local jurisdictions were allowed to add on and collect whatever their voters approve. The systems and procedures grew rather haphazardly.

These days, when local and state sales taxes are combined and averaged, Louisiana has the nation’s third-highest sales tax rates. But this amendment will do nothing about the rates. It’s all about eventually having a state commission be the sole collector of sales taxes.

Over the years, more than 300 taxing entities were approved by voters. And each had a claim on sales taxes in their jurisdiction. In the early 1990s, the state tried to better organize collections but ended up with legislation that allowed one collector per parish.

Legislators ran into opposition from municipal and parish governments, school boards, fire protection districts and others that flat didn’t trust state government to move the money efficiently to local entities.

Local governments do have property taxes, but the ad valorem rates are low. The main revenue source for local government are sales taxes. That’s what mostly pays for police, firefighters and libraries; to augment schoolteacher pay; and to maintain culverts and roads.

Now, a business needs to file returns and make payments to each parish where sales are made. A single streamlined procedure would allow a business to file a single return and remit a single payment.

“It makes your life much easier, and that improves compliance,” said Revenue Secretary Kimberly Lewis.

If Amendment 1 is approved by voters, the Legislature then would have to pass the bills to create the eight-member commission — four locals, four state officials — to collect sales taxes generated for each local jurisdiction as well as the state and ensure that each group gets its share.

“History has taught us that state commissions do not always act in the best interest of cities and towns, like when the State Bond Commission denied funding to New Orleans due to its decisions to institute stricter COVID-19 rules,” Ashley Shelton, executive director of Power Coalition for Equity & Justice, a New Orleans community group, said in a statement. “A yes vote on Constitutional Amendment 1 would allow a new, untested and unelected statewide commission to determine how sales taxes are used.”

Perhaps the biggest question is that the sales tax commission won’t be created by a favorable vote on the amendment.

“It’ll be up to the Legislature to resolve a number of questions,” said Jim Richardson, the retired LSU economist who had chaired the 2017 blue ribbon task force on updating the tax system.

If approved by voters on Nov. 13, two-thirds of legislators will have to pass bills that set up organization and rules. It’ll likely take another year to acquire the technology, hire the personnel and work out the other issues.

“If it happens quickly, I think it’ll be a mistake. A lot of thought has to go into this. It’s big process and we’re talking about billions and billions of dollars,” Procopio said. 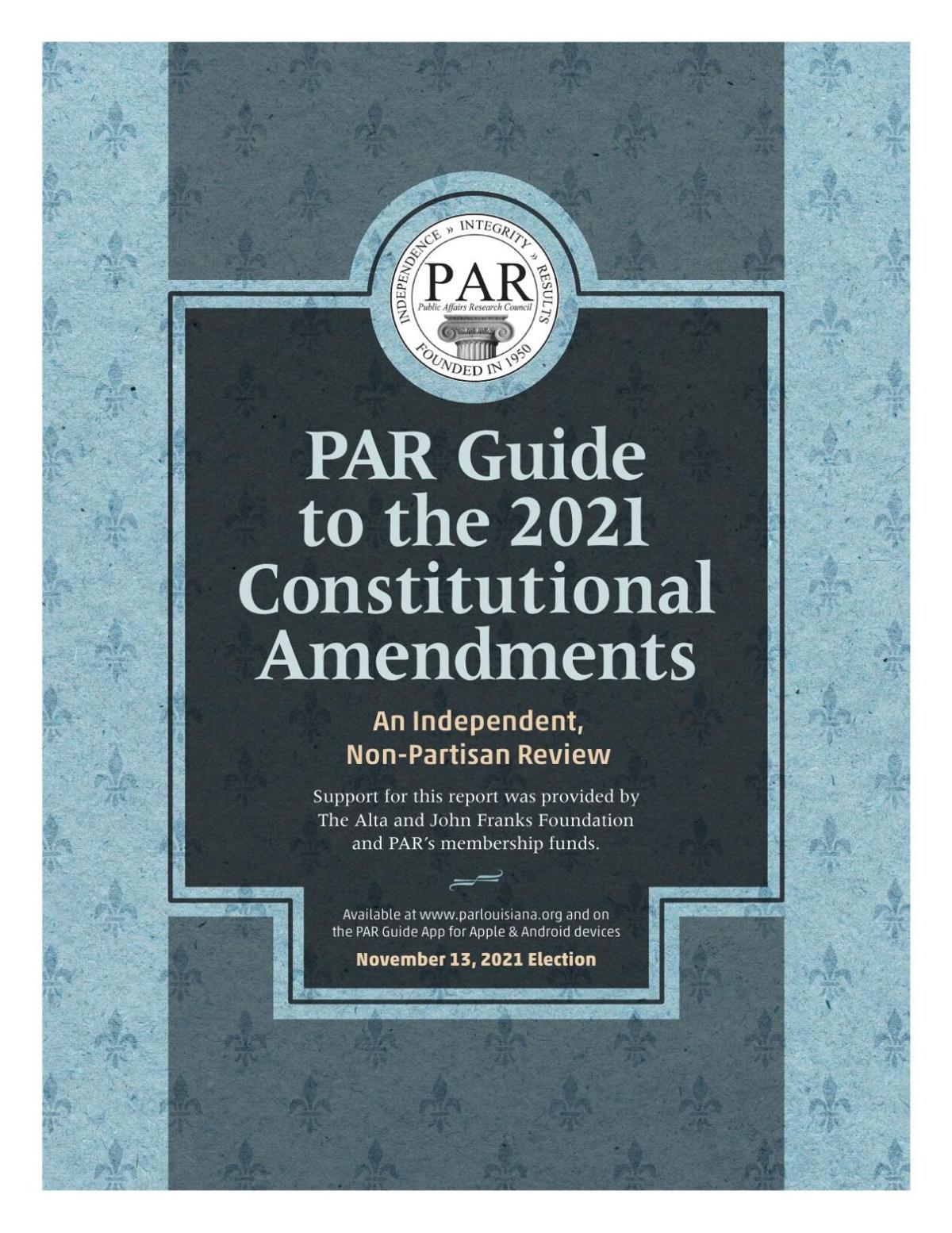 Amendment 2 would start the ball rolling to a kind of tax swap that would eventually cancel a hefty state income tax deduction and lower income tax rates.

Louisiana income taxpayers are allowed to deduct from their state returns the amount paid to the federal government. The federal income tax deduction removed $795.5 million that could have been added to state general fund in 2020, according to the Department of Revenue.

Richardson said back in 1970, legislators removed that deduction to cover a budget gap, only to have many defeated at the polls. In 1974, the federal income tax deduction was guaranteed in the state constitution.

“Indeed, if you even talked about changing it, it got no place,” Richardson said. “They put it on the ballot in 2000, and it was defeated handily.”

If a majority of the voters statewide approve, then three companion laws would take effect to reduce corporate income tax rates and franchise tax rates for corporations; and to cap the personal income tax rate in the constitution but allow for automatic future tax cuts if certain economic conditions are met.

The law also would limit another tax break that allows deduction of the amount in excess of the standard federal deduction to just medical expenses.

“We’ve always said we should get rid of that and by also getting rid of FIT, we get the ability to lower tax rates,” Richardson said.

Removing the federal income tax deduction also would free the state’s revenues from vagaries of federal decisions. The Trump tax changes in 2017 lowered the federal taxes owed, which raised the amount of revenues paid by Louisiana taxpayers. But should Congress increase federal taxes or once the Trump tax breaks expire, the amount of the deduction would go up and cut into Louisiana’s revenues.

Median household income in Louisiana is $49,469, according to the U.S. Census Bureau.

About 93% of the state’s taxpayers would pay less because the amount of the federal income tax deduction just about equals — tax revenues go down by $27 million — the amount people would pay with lower income tax rates, according to the Legislative Fiscal Office.

“First, it does not raise enough revenue to support the good schools, safe streets, reliable infrastructure and other services that families need in order to thrive,” wrote Jan Moller, head of Louisiana Budget Project, the Baton Rouge-based group that analyzes fiscal policies' impact on low- and moderate-income families.

“Second, it is regressive — meaning low-income households pay taxes at higher rates than those at the very top. This is because Louisiana has very high sales taxes — which eat up a disproportionate share of household income for low-income people, who must spend more of their take-home pay on immediate needs than their wealthier neighbors — and comparatively low-income taxes — where the highest rate applies to higher income-earners.

"In fact, it would help cement the status quo. By capping the top income-tax rate in the state constitution, Amendment 2 would make it harder in future years to make the kind of fundamental changes that could truly move Louisiana forward.”

Janelle Cammenga, policy analyst at the Tax Foundation, wrote: "Louisiana has long been near the bottom of the Tax Foundation’s rankings of the competitiveness of states’ tax structures, but these proposed changes would be an important step forward.”

Based in Washington, D.C., the think tank was created 84 years ago by major corporations to study tax issues. The business community and legislators put a lot of stock in what the Tax Foundation says.

“Taken together, the rate reductions, bracket consolidations, and sales tax centralization would improve the state’s tax climate and improve Louisiana’s ranking from 42nd to 38th on our State Business Tax Climate Index, finally lifting the state out of the bottom 10,” Cammenga said.

Our Views: Vote for constitutional amendments on the Nov. 13 ballot

With the enormous disruption caused by Hurricane Ida, Louisiana’s big elections this fall were postponed. And perhaps for that reason, there h…

State Sen. Patrick Connick, R-Marrero, argued that it was only fair to give the five levee boards the same authority as the other boards. Only 10 representatives voted against the measure.

Amendment 4 would increase the amount from dedicated funds that could be tapped in a fiscal emergency from 5% to 10%.

When officials see that the revenues aren’t going to be enough to pay all the bills, the governor must first cut spending. Once the chief executive reduces the budget by nearly 1%, the law allows the governor, with the approval of the Legislature, to tap funds that have been dedicated for a specific use and direct 5% of the money to the state general fund to pay bills.

This amendment to the constitution would change that amount to 10% of the money that had been legally locked away for a sole purpose.

Because the state has so many dedicated funds, in past deficit years, budget cuts had to be limited to appropriations for higher education, health care and a handful of other services.

“CABL and other public policy groups have long been concerned about the billions of dollars that have already been tied up in statutory and constitutional dedications,” wrote Barry Erwin, head of Council for A Better Louisiana, a Baton Rouge policy advocacy group. “Times when potentially huge shortfalls come are not that often. But when they do, the governor and the Legislature should have the authority to protect priorities they deem critical through temporary reductions in dedicated funds.”

A lot of early voters, but turnout for Saturday's election expected to be light

The number of mail-in ballots for Saturday’s election – triple the amount of the last similar contest in 2017 – fueled nearly 50,000 more vote…