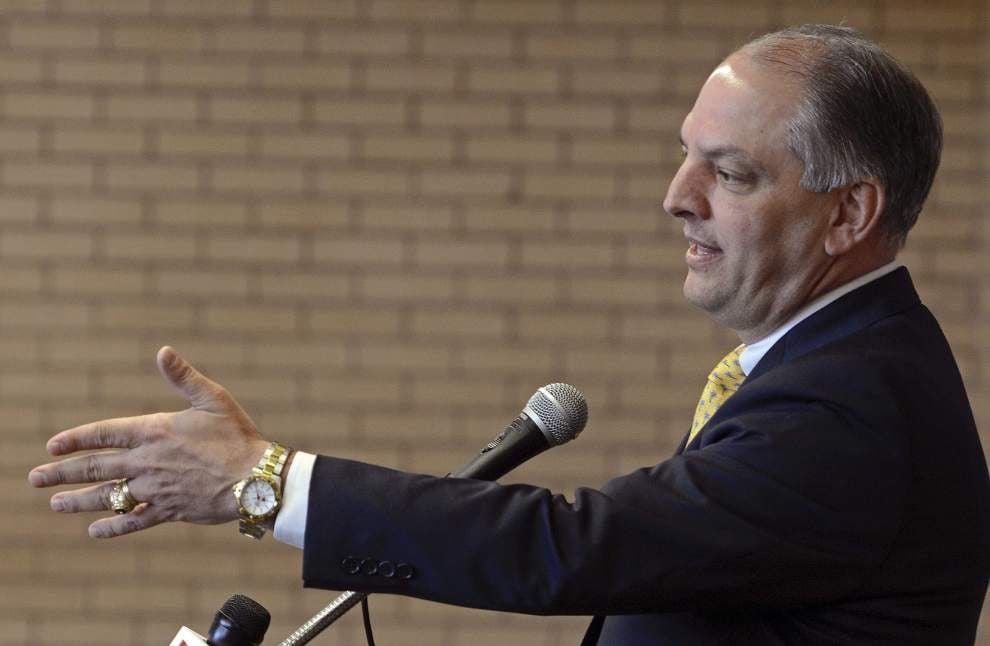 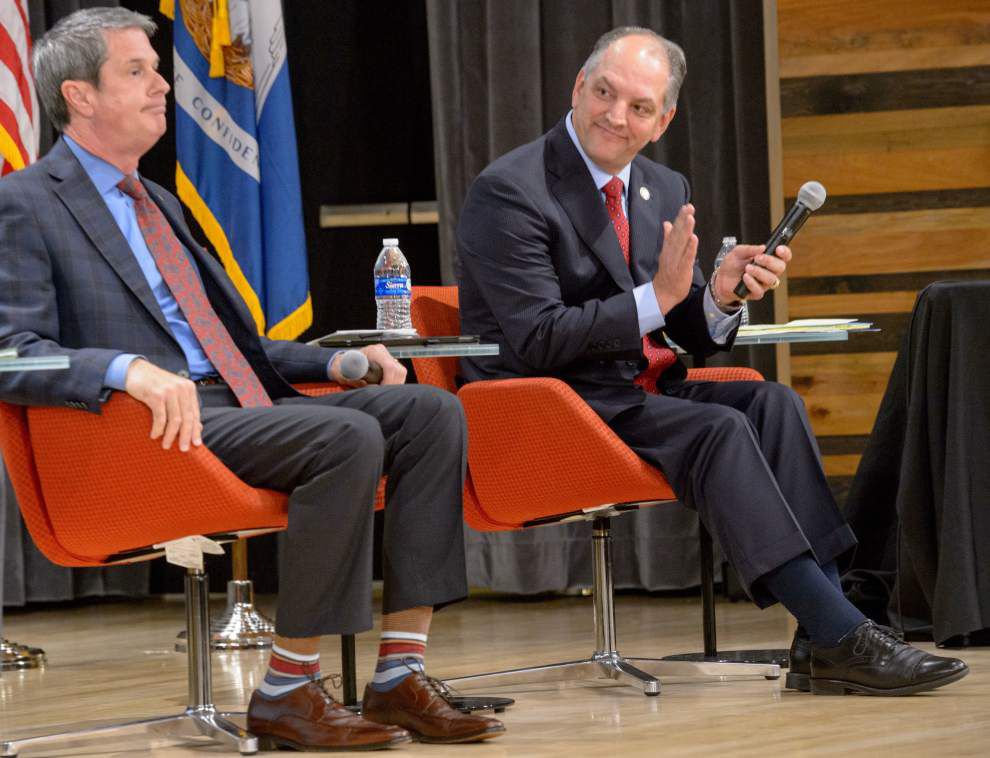 Business groups have given high marks to David Vitter throughout his long political career while taking a dim view of John Bel Edwards, his opponent in the Nov. 21 governor’s runoff.

Conversely, labor unions say Edwards, a state representative from Amite, has stood behind working men and women during his eight years in the House while giving a thumbs-down to Vitter during his 24 years in Baton Rouge and Washington, D.C.

But two groups important to social conservatives — the National Rifle Association and Louisiana Right to Life — blur the distinctions somewhat by giving both men outstanding grades.

The Louisiana Family Forum — which opposes sexual education, gambling and abortion — gave Edwards an average score of 51 percent during his eight years in the State Capitol.

An analysis of the voting records of both candidates shows that Vitter has toed the conservative line as a Republican member of the state House, the U.S. House and now the U.S. Senate. Over the past seven years, he has been an implacable foe of President Barack Obama. During the previous eight years, he was a reliable supporter of President George W. Bush.

In the state House, Edwards has sided with fellow Democrats on the budget, taxes and public education, but he is out of step with his party nationally with his anti-abortion and pro-gun views. Over the past four years, he has led the Democrats’ opposition to Gov. Bobby Jindal.

If past is prologue, how the candidates have voted over the years provides a good gauge of what to expect from them as governor. It’s not a perfect measure, of course. Edwards and Lt. Gov. Jay Dardenne — who endorsed Edwards on Thursday — say Vitter has selectively highlighted obscure votes in attack ads to mislead the public about his record. A broad range of votes, though, does provide a more complete picture.

Perhaps no group in the state has a more closely watched voting scorecard than the Louisiana Association of Business and Industry, the state’s most powerful business lobby. From 1992-99, when Vitter served in the state House, he voted 95 percent of the time with LABI. Over the past eight years, Edwards voted 29 percent with LABI.

Similarly, Vitter has a 98 percent voting record with the National Federation for Independent Business since he was elected to Congress in 1999, while Edwards had a 32 percent mark in the state House. NFIB members overwhelmingly voted to endorse Vitter over Edwards.

For both LABI and NFIB, Edwards scores low in part because he favors raising the $7.25 per hour minimum wage, voted to curb a number of business tax breaks during the 2015 legislative session and has favored stronger controls on business aimed at reducing pollution and protecting workers.

On tax issues, Vitter was one of the 38 senators in 2009 who voted against Obama’s $787 billion plan to stimulate the depressed economy through spending programs and tax cuts.

Ironically, both Vitter and Edwards cast favorable votes on key measures that favored upper-income taxpayers and have been blamed for causing budget deficits in Washington and Baton Rouge.

In 2001, Vitter supported a huge tax cut pushed through Congress by President George W. Bush that gave half of the money to the wealthiest 5 percent of taxpayers and cost the federal Treasury $1.35 trillion over the next decade, according to a Washington Post analysis.

In 2008, Edwards was part of the unanimous state House vote that lowered taxes for wealthier people by repealing a key portion of the so-called Stelly Plan.

“Some experts say this change represented the largest individual income tax cut in Louisiana history, and it comes as no surprise that the state’s tax collections dramatically decreased quickly thereafter,” LABI said in a recent analysis.

Vitter has voted with the national AFL-CIO 17 percent of the time, while the Louisiana AFL-CIO is a key part of Edwards’ coalition.

The League of Conservation Voters, for example, says Vitter has voted 5 percent of the time to protect the environment.

No environmental groups regularly score the candidates in Louisiana, but the Green Army gave Edwards a 100 percent mark in 2014 in part because he voted to keep alive a lawsuit filed by the Southeast Louisiana Flood Protection Authority-East that sought to force 97 oil and gas companies to pay billions of dollars for repairs to the state’s collapsing coast. Edwards’ support for the lawsuit meant he sided with the state’s powerful trial attorneys, a key Democratic constituency.

The lawsuit eventually was tossed out by the courts.

Oil and gas interests — and their allies in the business community — said the lawsuit would prompt companies to take their businesses elsewhere and got the Legislature and Jindal to kill it.

Edwards scored 8 percent with the Louisiana Oil and Gas Association that year on a total of 120 votes. The group, which represents independent drillers, has endorsed Vitter.

Pro-business groups also ding Edwards for siding with trial lawyers by opposing an effort to change the jury threshold for civil cases. Over the past 20 years, cases have not been heard by a jury if the amount in dispute is worth less than $50,000. That is the highest threshold in the country. LABI and NFIB want to lower it in the belief that too many judges are beholden to trial lawyers’ interests. Vitter sides with LABI and NFIB on this issue.

On another issue, Vitter and Edwards are both vowing to reverse the Common Core public school standards that Louisiana has adopted, although for different reasons. Vitter is catering to conservatives’ distrust of the standards, while Edwards is aligned with teachers unions that believe they create unnecessary burdens on schools.

Their differing reasons for opposing Common Core reflect their general disagreement over public education, with Vitter supporting an expansion of charter schools and the use of public dollars for private voucher programs. The National Education Association gives Vitter an F in Washington over the past six years.

Meanwhile, the Louisiana Federation of Teachers gives Edwards an A+ for fighting hard to direct more money for public schools and opposing Jindal’s efforts in 2012 to take more public dollars for the private school voucher plan and to more directly tie teacher pay to teacher evaluations.

“Rep. Edwards was one of the heroes who actually read the legislation, did his own homework and stood tall in defense of our constitution, our kids, teachers and communities,” Steve Monaghan, the union’s president, said in a statement.

Mark Ballard, of The Advocate Capitol news bureau, contributed to this article.

Being pro-gun, as he puts it, is central to Gov. John Bel Edwards' brand. Along with his opposition to abortion, his support of gun rights sen…