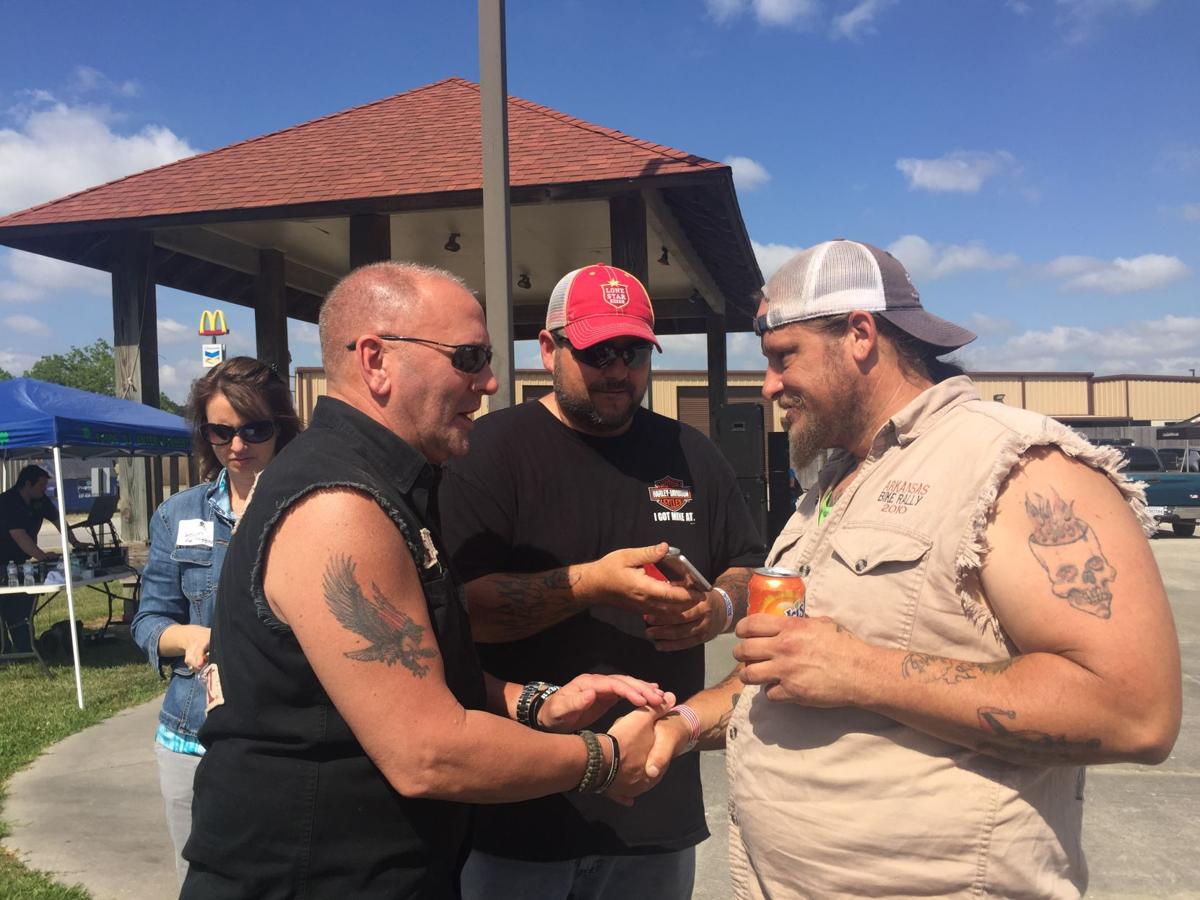 U.S. Rep. Clay Higgins (left) chats with supporters in the parking lot of Cajun Harley-Davidson in Scott during a May 12 motorcycle ride fundraiser that featured Duane "Dog" Chapman from "Dog the Bounty Hunter." 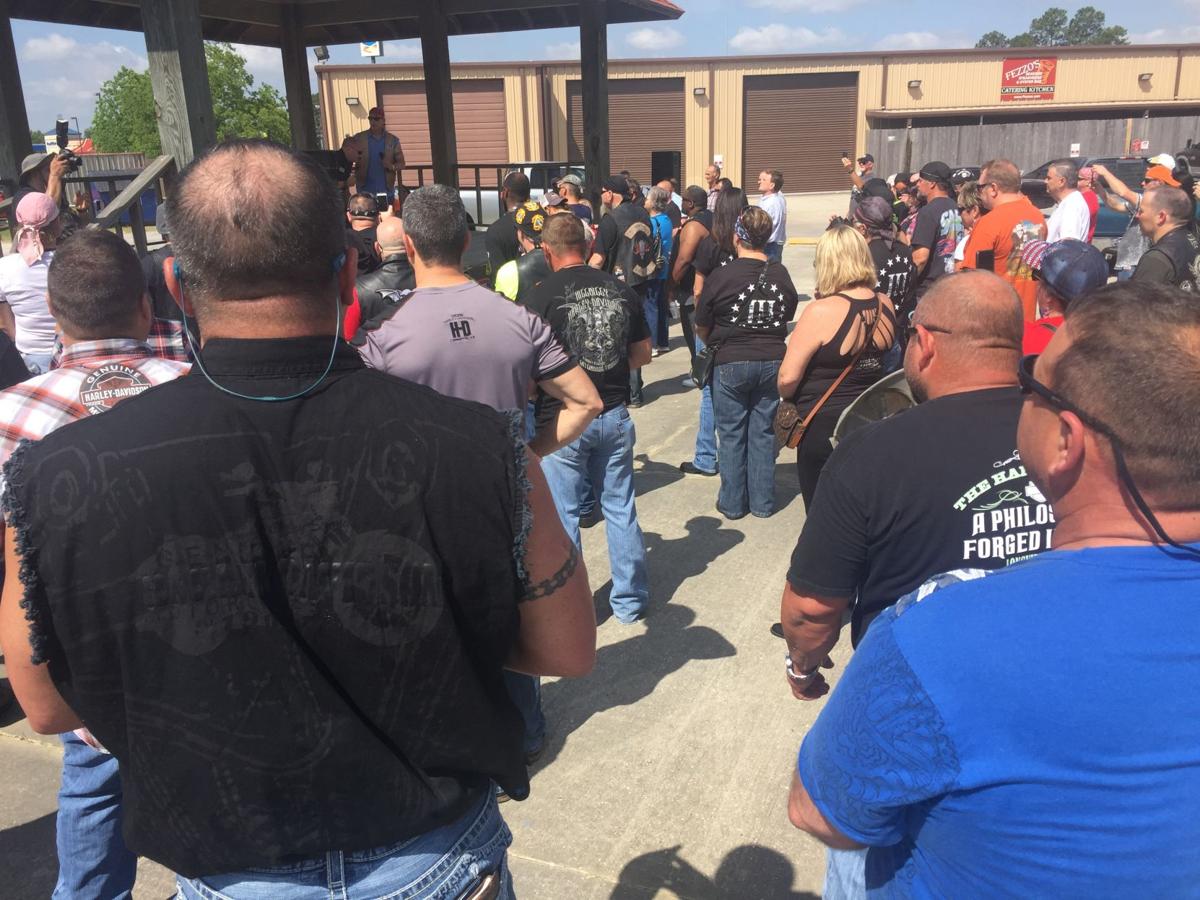 U.S. Rep. Clay Higgins' supporters gather in the parking lot of Cajun Harley-Davidson in Scott during a May 12 motorcycle ride fundraiser that featured Duane "Dog" Chapman from "Dog the Bounty Hunter." 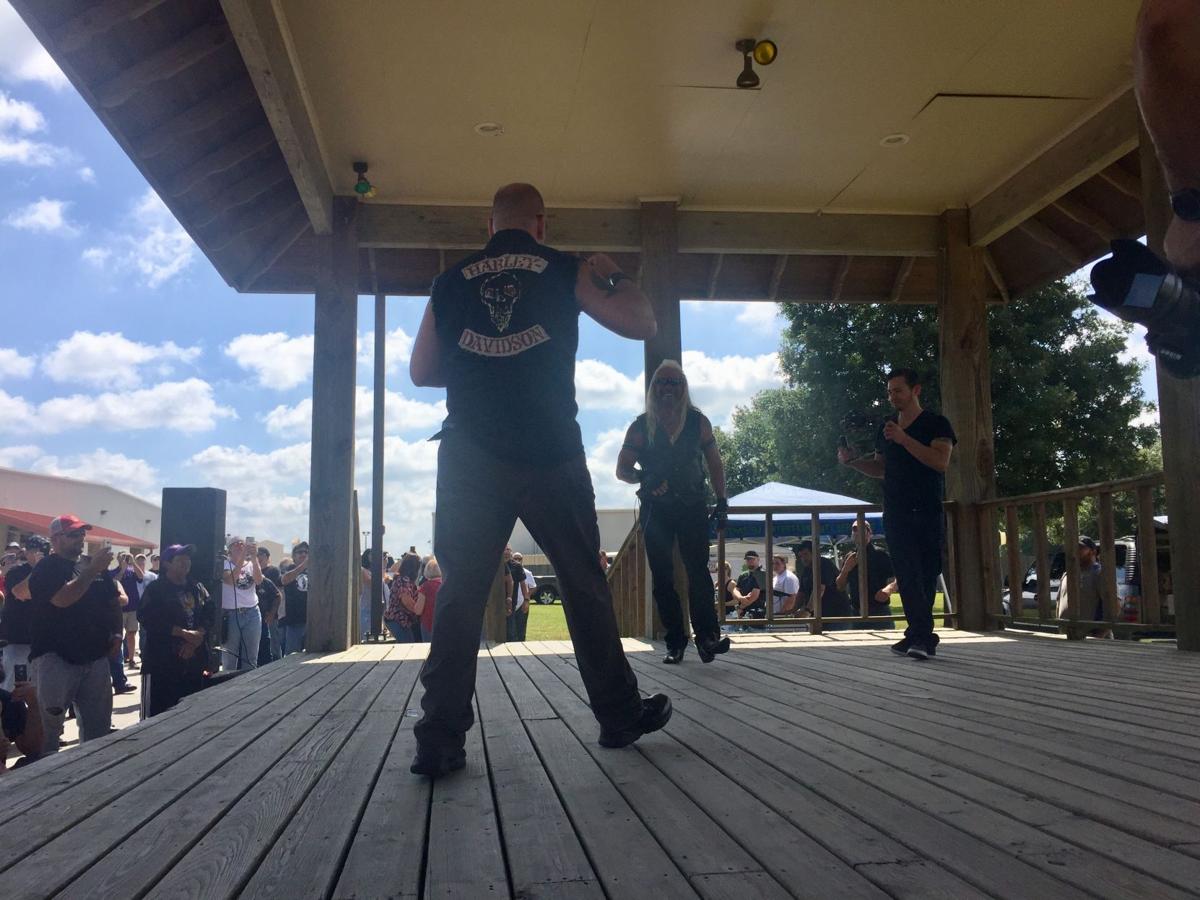 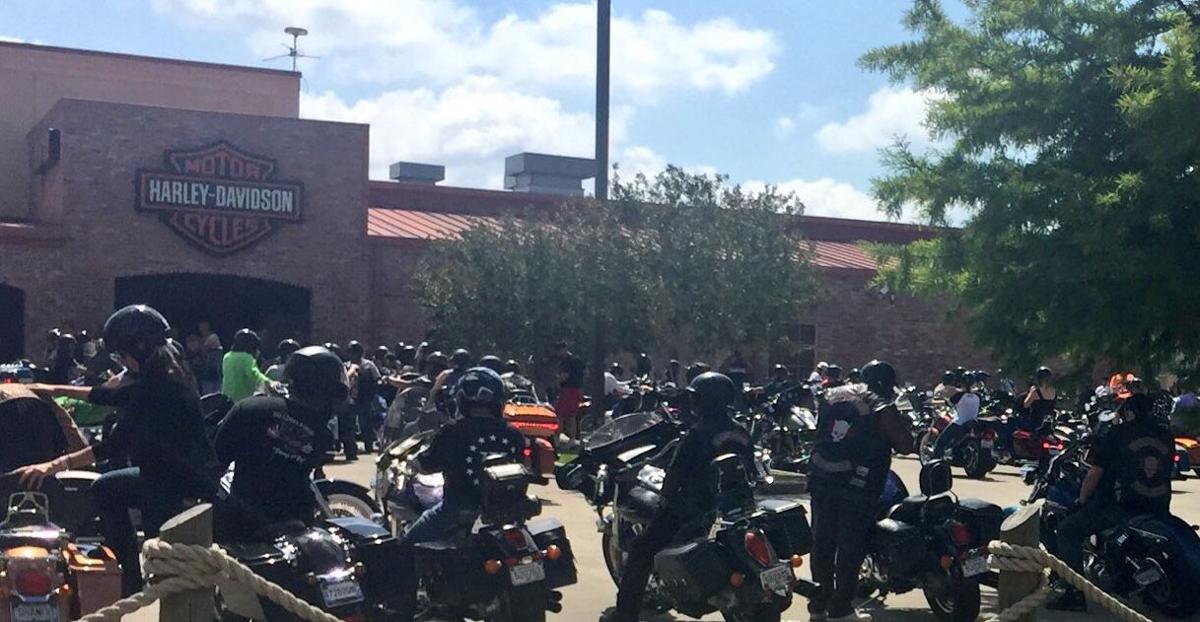 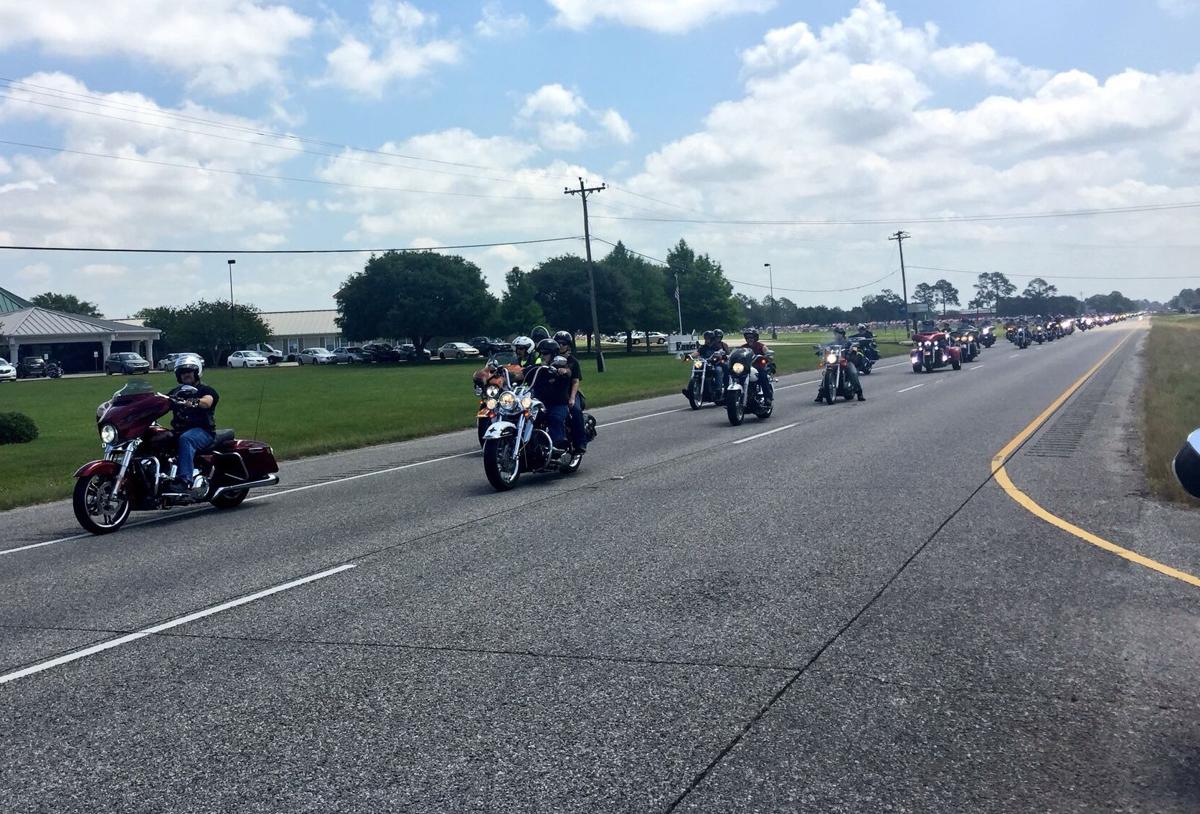 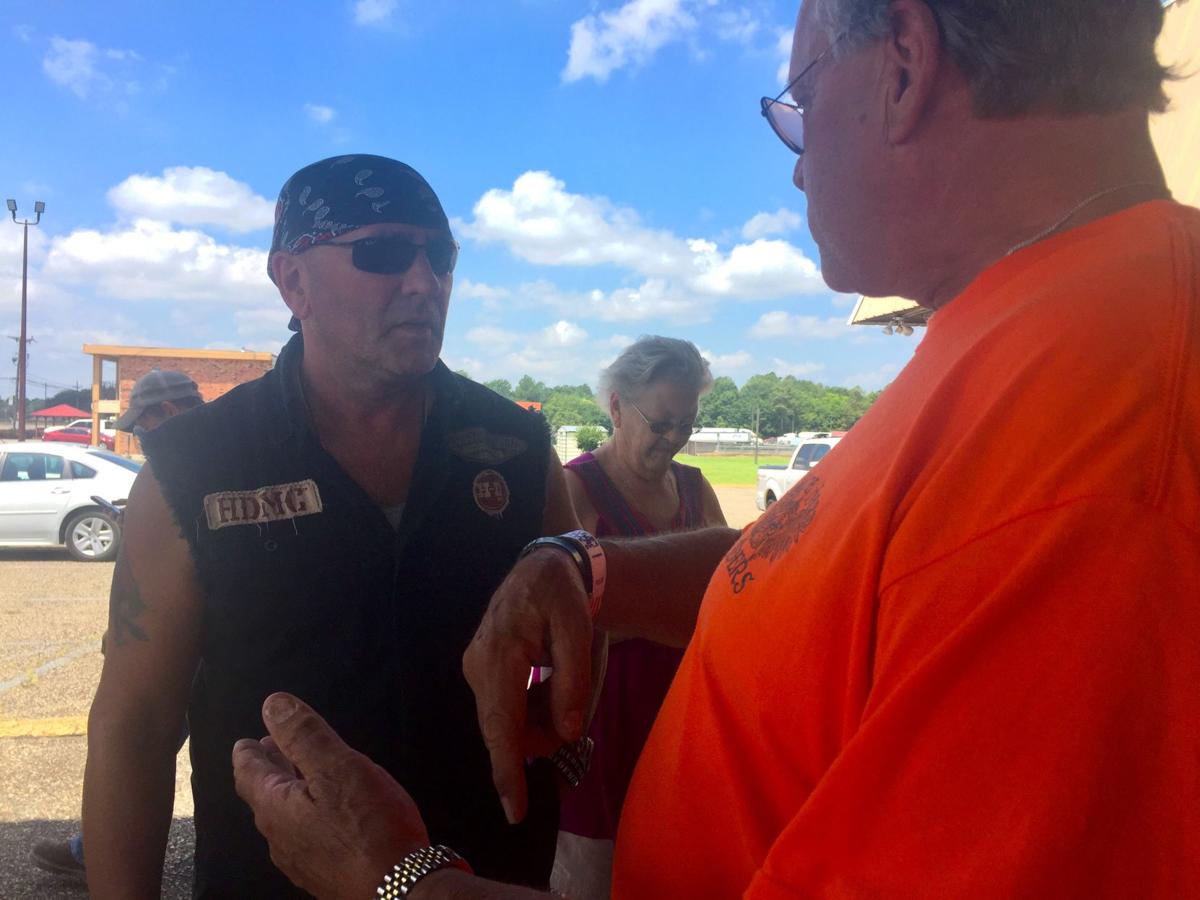 U.S. Rep. Clay Higgins, left, chats with a supporter in outside the VFW hall in Eunice during a May 12 motorcycle ride fundraiser that featured Duane "Dog" Chapman from "Dog the Bounty Hunter." 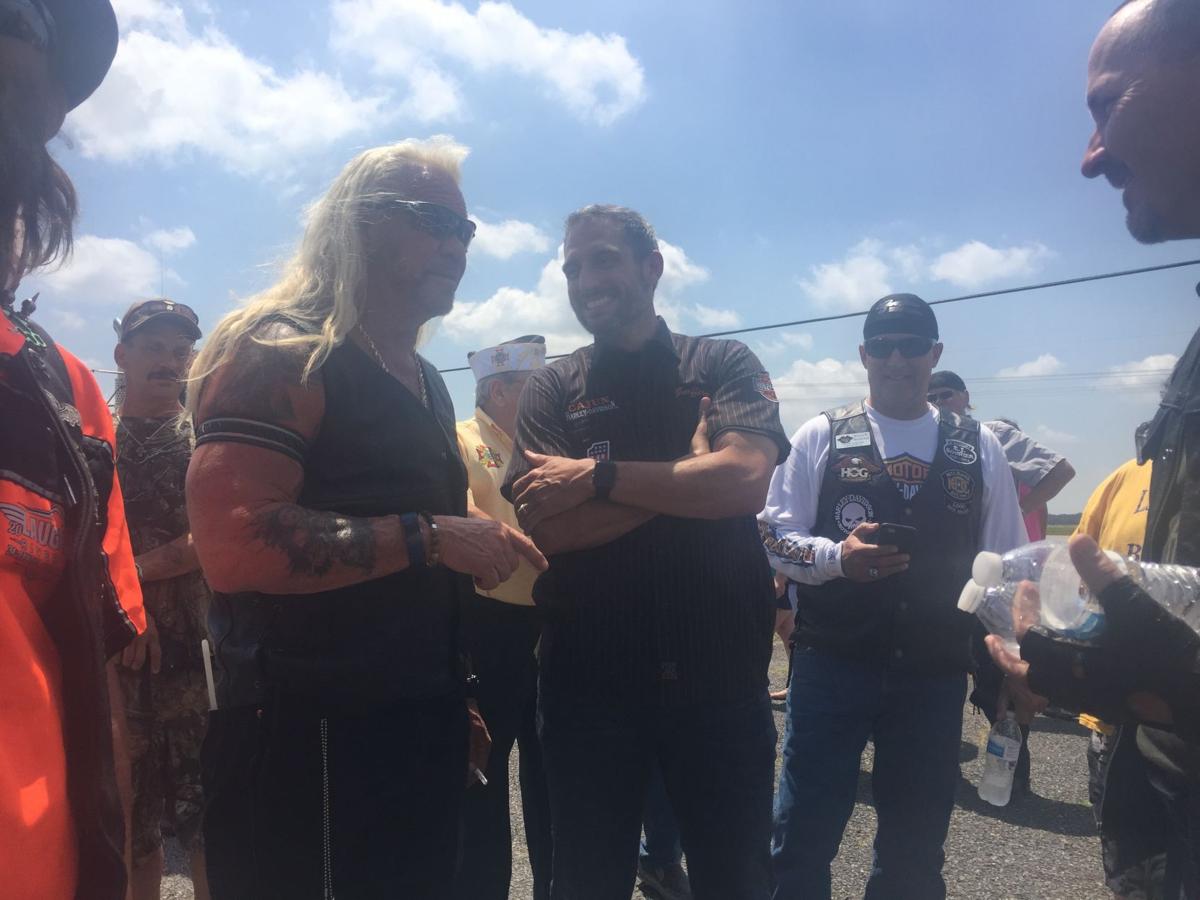 Duane "Dog" Chapman from "Dog the Bounty Hunter" chats with fans outside the VFW hall in Eunice during a May 12 motorcycle ride fundraiser for U.S. Rep. Clay Higgins.

U.S. Rep. Clay Higgins (left) chats with supporters in the parking lot of Cajun Harley-Davidson in Scott during a May 12 motorcycle ride fundraiser that featured Duane "Dog" Chapman from "Dog the Bounty Hunter."

U.S. Rep. Clay Higgins' supporters gather in the parking lot of Cajun Harley-Davidson in Scott during a May 12 motorcycle ride fundraiser that featured Duane "Dog" Chapman from "Dog the Bounty Hunter."

U.S. Rep. Clay Higgins, left, chats with a supporter in outside the VFW hall in Eunice during a May 12 motorcycle ride fundraiser that featured Duane "Dog" Chapman from "Dog the Bounty Hunter."

Duane "Dog" Chapman from "Dog the Bounty Hunter" chats with fans outside the VFW hall in Eunice during a May 12 motorcycle ride fundraiser for U.S. Rep. Clay Higgins.

SCOTT — On a recent Saturday, hundreds of motorcycles rolled through Acadiana — with a curious figure at the head of the pack on his own 2016 Harley-Davidson V-Rod Muscle.

It's safe to say Louisiana's 3rd District U.S. Rep. Clay Higgins isn't your typical congressman. And on this day, he had brought an equally unlikely celebrity for his motorcycle ride/political fundraiser: Duane "Dog" Chapman, of "Dog the Bounty Hunter" fame.

"This is one America, united," Higgins, R-Port Barre, said to an attentive, almost churchlike crowd clad in sleeveless shirts, leather motorcycle vests and do-rags. "Let us today be an example for the nation of what true brotherhood and respect can look like."

Thanks to his sleeveless shirt, the tattoo on Higgins' right bicep of an eagle with a distressed American flag, normally covered by long sleeves and suit jackets in the halls of Congress and at more up-scale events, was on full display.

At each stop along the way over the course of the day — a legion hall, a biker bar and a motorcycle shop just off Interstate 10 — even more fans and potential supporters eagerly greeted the traveling pack.

Higgins, 56, was thought to be a long shot when he first ran for Congress two years ago against presumed Republican front-runner Scott Angelle, who was a member of the state Public Service Commission and narrowly missed the runoff for governor a year earlier.

The former St. Landry Parish sheriff's deputy and Crime Stoppers video star said he's enjoying his time in Congress, but he said the bike ride fundraiser was an opportunity to be among people he feels close to.

Since being elected to Congress, Higgins has maintained a relatively low profile — certainly lower than some had expected, given his bombastic track record as the "Cajun John Wayne" when he was active in local law enforcement.

Now he's up for re-election. The fundraiser featuring Chapman was a launch point for what has been an aggressive fundraising push after Higgins paid off his last campaign effort.

Chapman, star of the eponymous reality TV show that aired eight seasons on A&E, said he considers Higgins a friend. He has visited the congressman's office in Washington, D.C.

"He is a very good human being and cares about people," said Chapman, his long blond hair shining as he took photos with fans in steamy parking lots along the ride. "We need these kinds of politicians in America right now."

Chapman's wife, Beth, who also made a cameo appearance at the event, similarly vouched for Higgins, whom she said she has worked with on issues related to pretrial programs.

"Clay doesn't vote just to please somebody or because it's trendy," she said. "He votes with his heart."

All of Louisiana's incumbent congressmen will face challengers in this fall's election. Of them, Higgins had drawn the most opponents when candidate qualifying ended Friday.

And it's Higgins voting record that his biggest challengers — from both sides of the aisle — say they take issue with.

Democrat Mimi Methvin and Republican Josh Guillory are the only Higgins opponents who have raised more than $50,000 in campaign contributions, according to the most recent finance reports filed this month.

Other candidates in the race include Libertarian Aaron Andrus, of Westlake, and Democrats Rob Anderson, of DeQuincy; Larry Rader, of New Iberia; and Verone Thomas, of Lake Charles.

Guillory, a 35-year-old Army veteran and family law attorney, called Higgins a "phony and a hypocrite." One of his biggest gripes against the incumbent is that he voted to raise the debt ceiling.

"At some point, we have to take fiscal responsibility seriously," Guillory said. "I will not vote to increase our national debt. We have got to get our spending under control."

Giuliani: On why he's in Lafayette to support Clay Higgins' opponent Josh Guillory

He said he believes Higgins has fallen into the same trap other politicians fall into when they go to Washington — putting party politics over their constituents. "I will fight for our constituents and put their best interest over the interests of the party," Guillory said.

Methvin, 65, and Guillory are strikingly different in most of their policy positions. But both characterize Higgins, an unlikely congressman who won election on an anti-insider wave, as being part of the GOP establishment.

"My big complaint is he has just toed the GOP line," said Methvin, a former U.S. magistrate judge in Lafayette. "He has voted for policies that hurt people in the 3rd District."

Because of how Louisiana's congressional districts converge in the center of the state, Higgins actually lives in the 5th District, represented by Congressman Ralph Abraham, of Alto.

Members of Congress are not required by law to live in the districts they represent.

That's another issue Guillory repeatedly deploys in his criticism of Higgins.

"We deserve to have someone represent us who actually lives here," Guillory said. "When you live in a district, you tend to know what the best interest of the community is. You naturally know what is going on."

Methvin's run mirrors other campaigns, mostly political newcomers who also happen to be women, that have seen unexpected success in other states.

"At the bottom line, you ask yourself 'If you don't step up, who will?' ” she said. "I'm tired of sitting back and waiting for candidates to step up and do something."

Methvin said her decision to run for Congress came as part of an accumulation of frustrations over how things are being run in the nation's capital.

"Just watching what is happening in Washington with the attacks on our democracy and observing so many of our representatives who are corporate-owned or too far into party ideology," she said.

Methvin supports the "Medicare for All" concept, increasing the federal minimum wage to $15 an hour and efforts to make college more affordable.

Guillory made national headlines a couple of months ago when Rudy Giuliani, a member of President Donald Trump's legal team, came out in support of Guillory's campaign and held a fundraiser for him in the district, despite Trump's backing of Higgins.

The episode prompted rebuke from some Republicans in the state and eventually spiraled into gossip about the private romantic relationship between a top Guillory campaign aide and Giuliani.

Guillory said he's honored to have the support of the former New York City mayor, whom he looks up to.

"I feel like (Giuliani) has a lot to offer to anybody who will listen to him," Guillory said. "But the only endorsement we should focus on is the residents of the 3rd District -- my neighbors."

As for Trump's Higgins endorsement, Guillory said he doesn't see it as a slight against himself.

"I do not believe President Trump is against me, nor should he be," he said.

No formal polls have been released on the 3rd District race, but each of the three leading candidates have stressed that they believe voter turnout will be key to winning.

Higgins was first elected in 2016 — the year of the presidential election. Midterm elections tend to have lower turnout.

Under Louisiana's nonpartisan "jungle" primary system, all candidates will appear on the same ballot on Nov. 6. If no candidate gets more than 50 percent of the vote, then the top two vote-getters, regardless of party, will face each other in a runoff on Dec. 8.

"Voter engagement has never been more critical," Methvin said. "I think a lot of us were asleep in 2016. ... We have a lot of candidates in the race, and it's just going to require voters pay attention."

Methvin said she believes in the "blue wave" some have predicted could help Democrats seize control of the House. "This district would do a whole lot better with a member of Congress who is part of the majority party," she said.

Methvin said she has more than 300 volunteers already working to build support and sees more interest each day.

"We've got the momentum, and I'm very confident that this is a winnable race," she said.

Guillory said one of his priorities would be to push Congress to do more to deregulate industries by forcing federal agencies to scale back efforts through smaller budgets and other limits to their authority.

"People want a voice back. They want to be heard and know that their representative knows what is going on," Guillory said.

U.S. Rep. Clay Higgins sailed into Congress on an anti-establishment wave in 2016, but the bombastic viral video star has maintained a relativ…