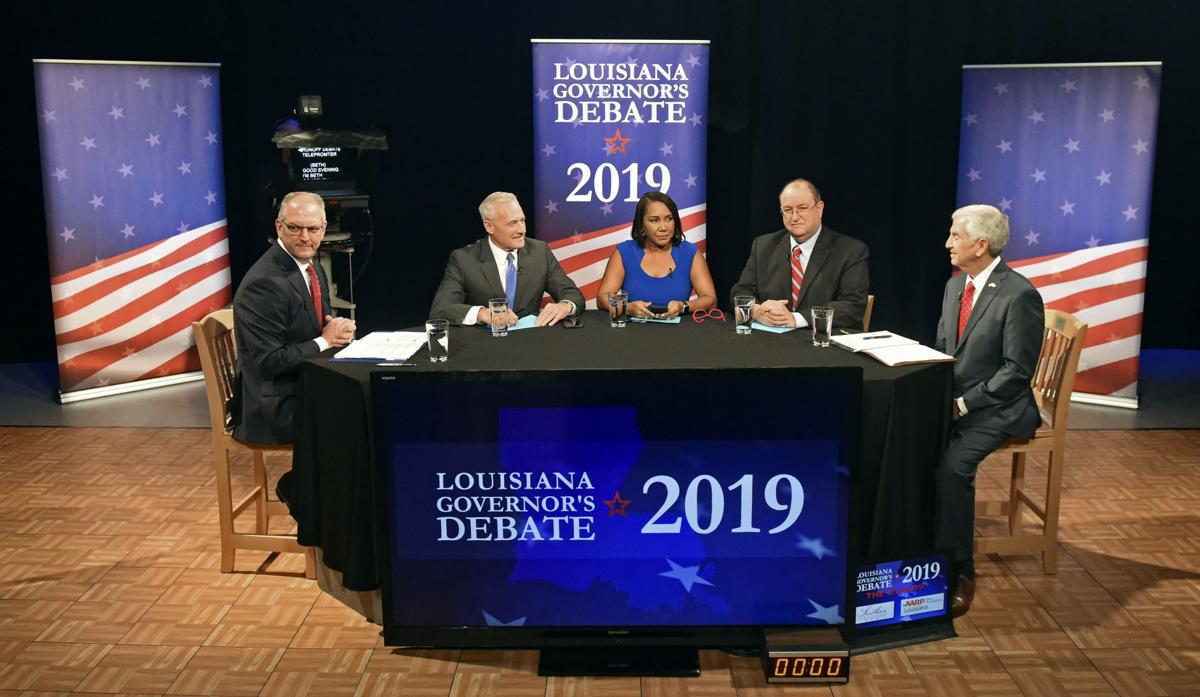 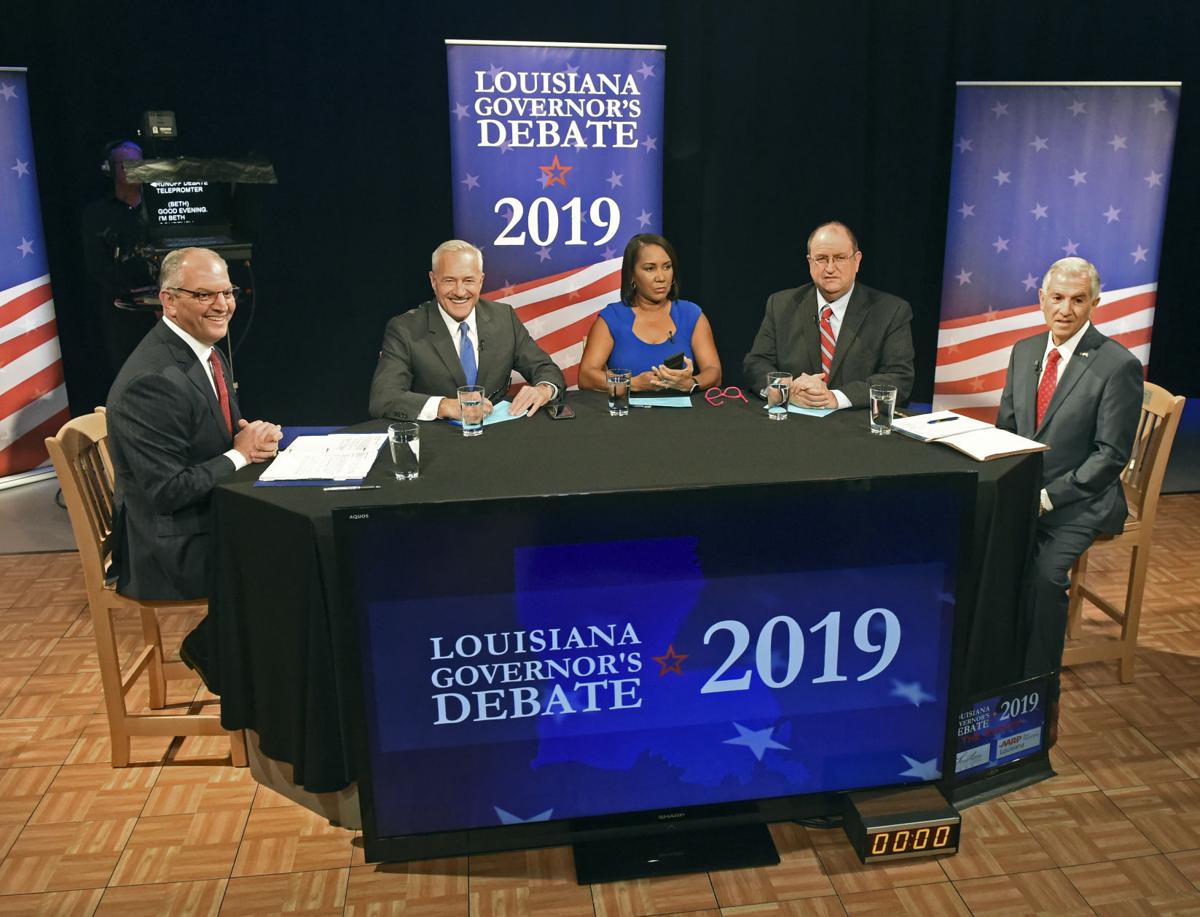 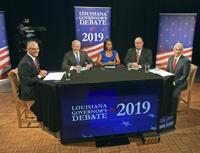 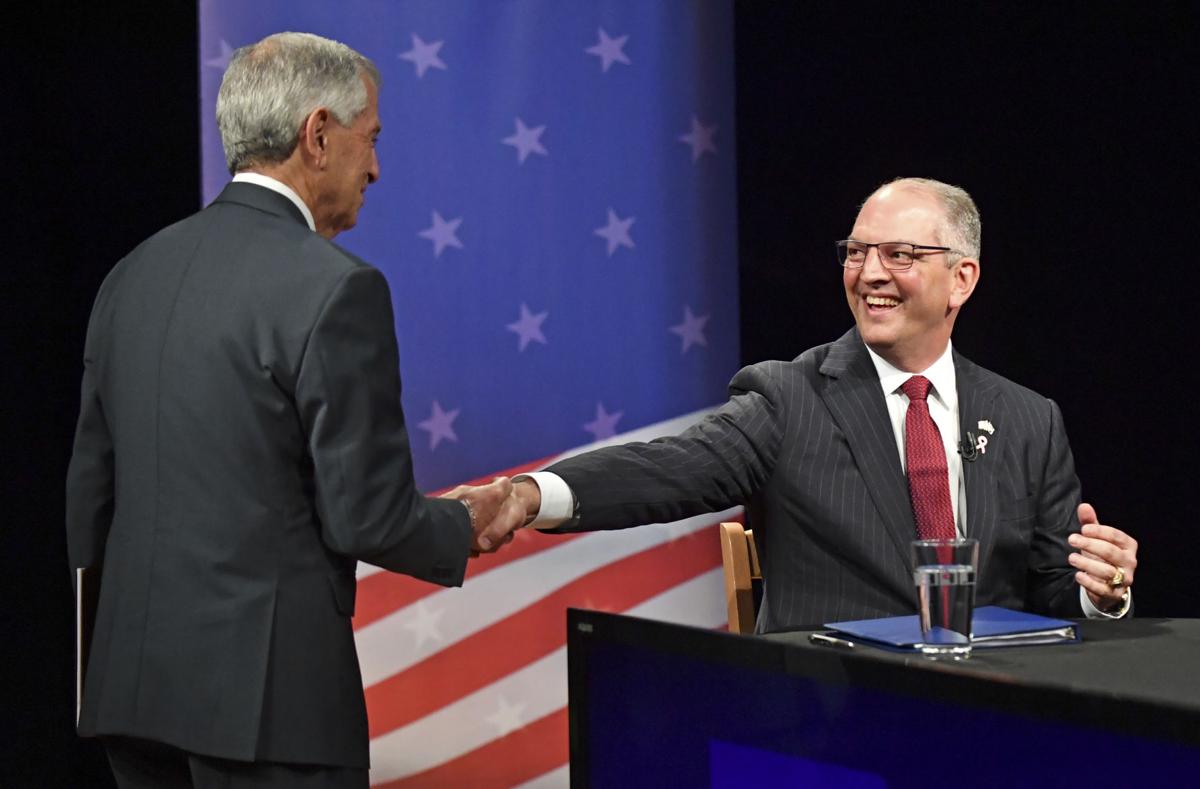 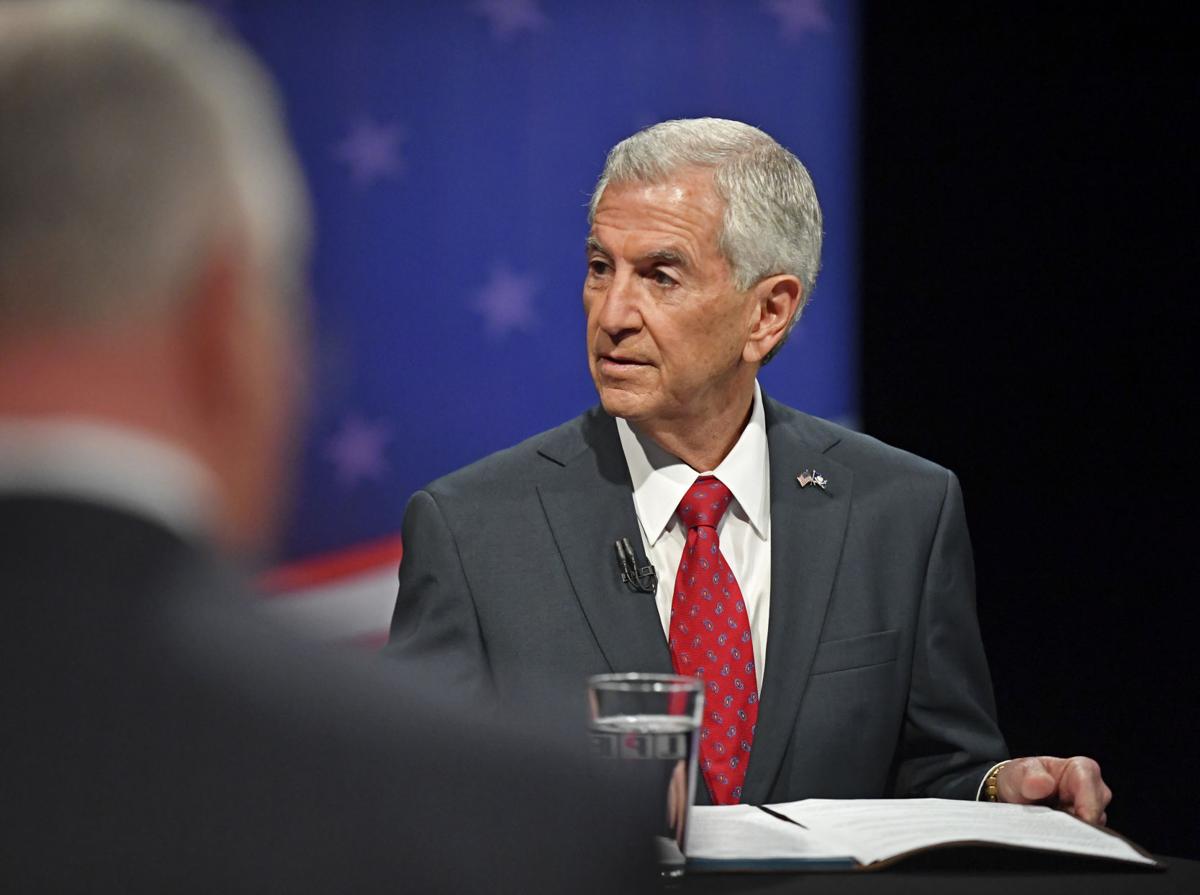 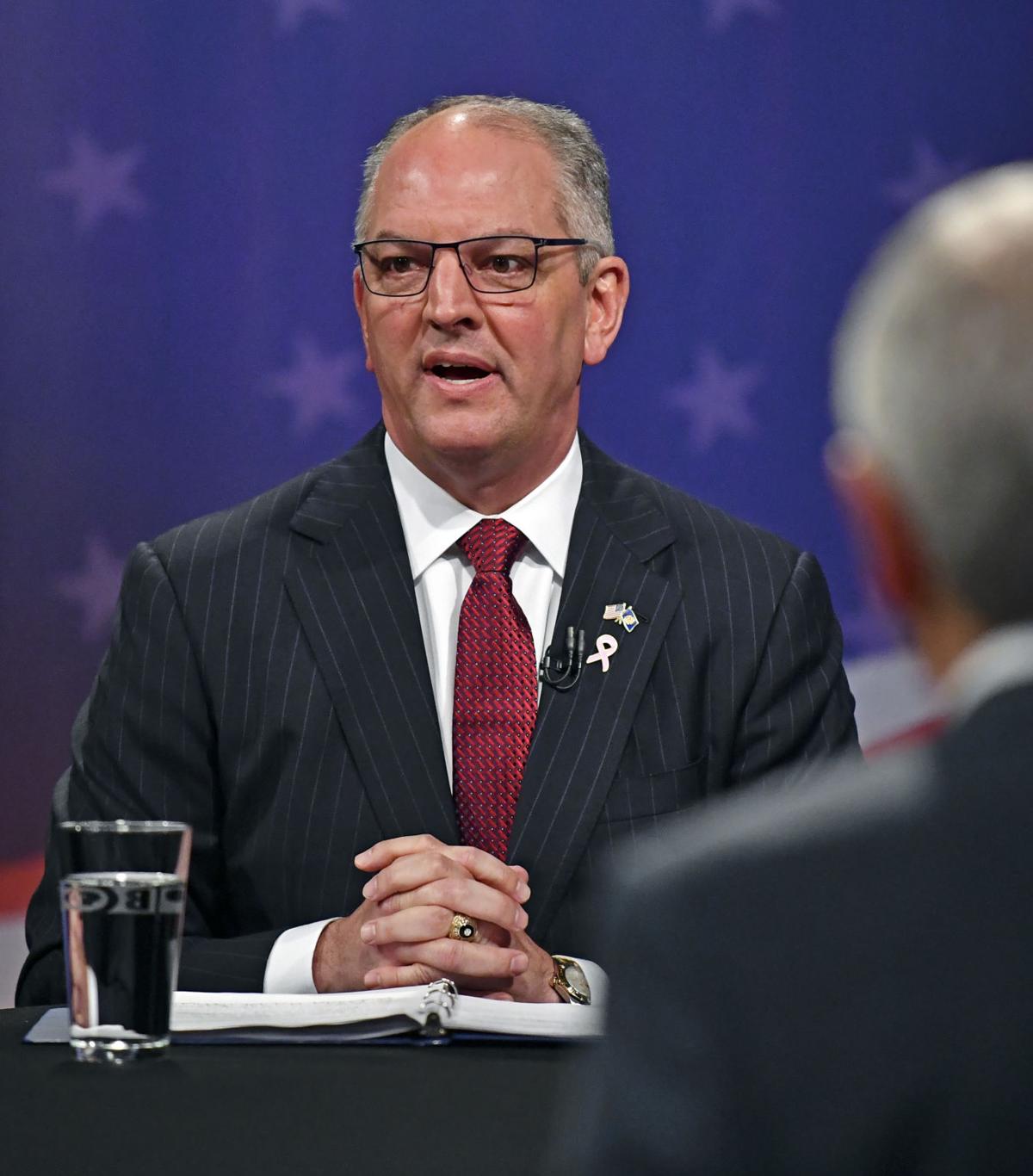 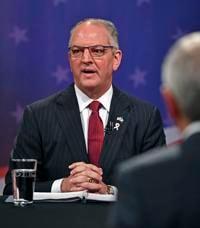 The two candidates for Louisiana governor, incumbent Democrat John Bel Edwards and Republican challenger Eddie Rispone, faced off in a fiery debate Wednesday night, excoriating each other and trying to tarnish each other’s images in the only joint appearance they will make together in the runoff election.

Edwards, the only Democratic governor in the Deep South, sought to play up his bipartisan credentials and distance himself from national politics, amid the Trump administration’s increasing involvement in the race. Rispone embraced President Donald Trump and tried to nationalize the election, repeatedly calling the governor a “liberal” and highlighting his own business background.

But the governor came out swinging. He threw mud on Rispone’s image, cultivated through millions in TV ads funded by his personal wealth, of a conservative outsider. Edwards accused him of bilking state tax incentive programs, trading influence at the state Capitol and repeatedly called him “phony.”

When given the opportunity to pose each other questions, both men went on the offensive. Rispone chastised the governor for “killing jobs” and being beholden to trial lawyers. Edwards, invoking attacks Rispone made against third-place primary finisher U.S. Rep. Ralph Abraham, a Republican, said he was “lying now about my record just like he lied about Mr. Abraham’s record,” in line with the governor’s effort to capture some Abraham primary voters.

The acrimonious nature of the debate prompted Rispone to call the governor “very upset” and “angry” when speaking with reporters afterward.

Rispone painted himself as an outsider businessman in the mold of Trump who would overhaul the state’s constitution, while offering few specifics, to make the state competitive and juice its economy. He argued he has “business skills” needed to create jobs in a state that ranks near the bottom of many lists.

“What you’ve been doing is killing jobs, you and your liberal trial lawyers,” Rispone said to Edwards.

“This is a clear choice between a tax-and-spend liberal career politician...and an outsider, a conservative, a pro-Trump person, someone who has created thousands of jobs,” he added.

Rispone again brought illegal immigration, not typically an election issue in a state with relatively few unauthorized immigrants, to the forefront, which Edwards said was a “stupid question.” And Rispone defended himself from accusations he is ducking voters, saying he’s been “all over this state” visiting with voters, though mostly at private events. Edwards agreed to another TV debate and has attended multiple forums, but Rispone is making Wednesday’s debate his only joint appearance with the governor, who has a reputation as a strong debater.

The debate, hosted by Louisiana Public Broadcasting in its Baton Rouge studios, came ahead of a week-long early voting period in the race that begins Saturday. The runoff is Nov. 16.

Polls show a tight race, with both men within the margin of error. Trump is expected to return to Louisiana during the runoff after stumping for the Republicans on the night before the primary in Lake Charles, and Republicans hope the president will lift Rispone to a victory over a relatively popular incumbent in a state the president carried by 20 points in 2016.

Grace Notes: Debate offers one last chance for gubernatorial candidates to tell us what they'll do

Rispone hit Edwards for supporting Hillary Clinton in that race instead of Trump, as part of his effort to tie Edwards to the national Democratic party. He said Edwards will support what he called a “wacko,” “socialist” candidate for president in 2020, while the governor highlighted his work with Trump in his first term.

“You’re not talking about me, you’re talking about some generic Democrat that’s in your mind,” Edwards said, noting the state Legislature's Republican majority, whose support he needed to pass a tax and budget deal.

Rispone, co-founder of the industrial contracting firm ISC Constructors, poured $11.5 million of his personal wealth into his campaign in the primary, spending millions on TV ads that compared himself to Trump. A longtime GOP donor, Rispone edged out Abraham, the other major Republican, for a coveted second-place spot that advanced him to a runoff against Edwards.

A rare Democratic statewide official in Louisiana, Edwards has drawn the attention of national Republicans, who have delivered an influx of cash used on attack ads. The Trump administration, seeking to flex its political muscle amid a turbulent impeachment inquiry, has made its presence felt. Vice President Mike Pence returned to Louisiana for the second time during the campaign earlier this week to help Rispone raise money, and Trump is expected to return in the coming weeks to try to push Rispone past the finish line.

Republicans are hoping to nationalize the race and liken Edwards to his more progressive Democratic counterparts in D.C. The governor, meanwhile, is trying to cast the election as a decision to keep moving forward or return to the tenure of his predecessor, former Gov. Bobby Jindal, a Republican who left office historically unpopular in Louisiana.

They differ on a host of other issues. Edwards has campaigned on his expansion of Medicaid, while Rispone wants to freeze enrollment and undertake an unspecified reform of the program. The governor opposes a convention to rewrite Louisiana’s constitution, while Rispone supports one. Edwards is mostly standing behind his overhaul of the lucrative Industrial Tax Exemption Program, an incentive for manufacturers, while Rispone wants to change it.

John Bel Edwards vs. Eddie Rispone quiz: How well do you know the candidates?

The Houston Astros and Washington Nationals have had seven long games to go at one another. Gov. John Bel Edwards and his runoff opponent Eddi…