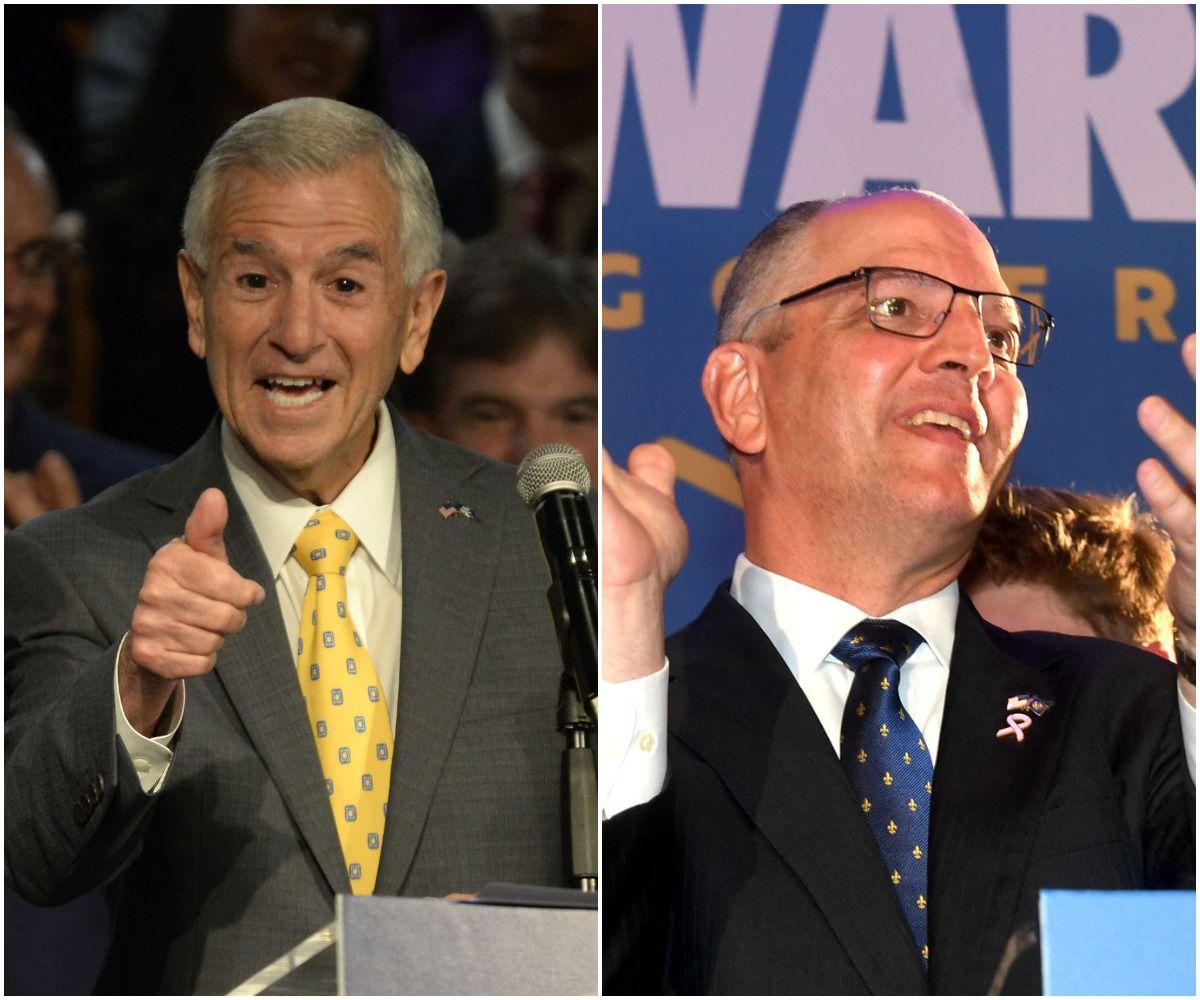 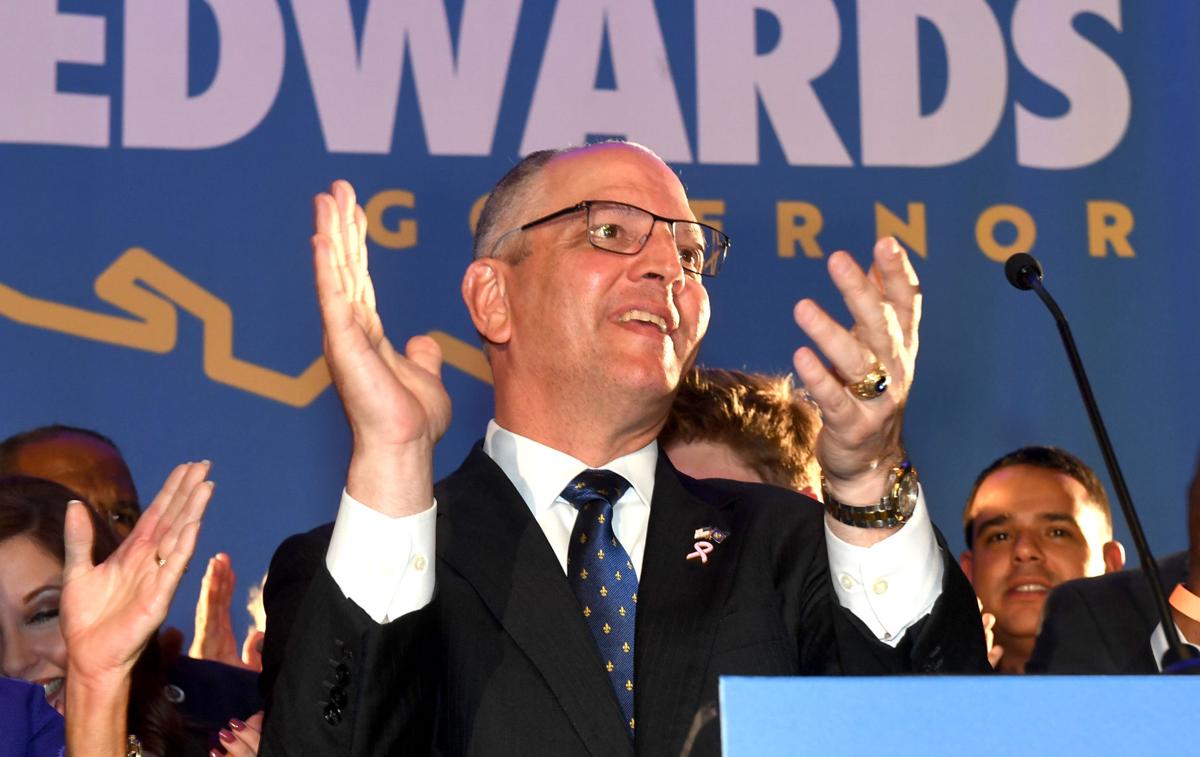 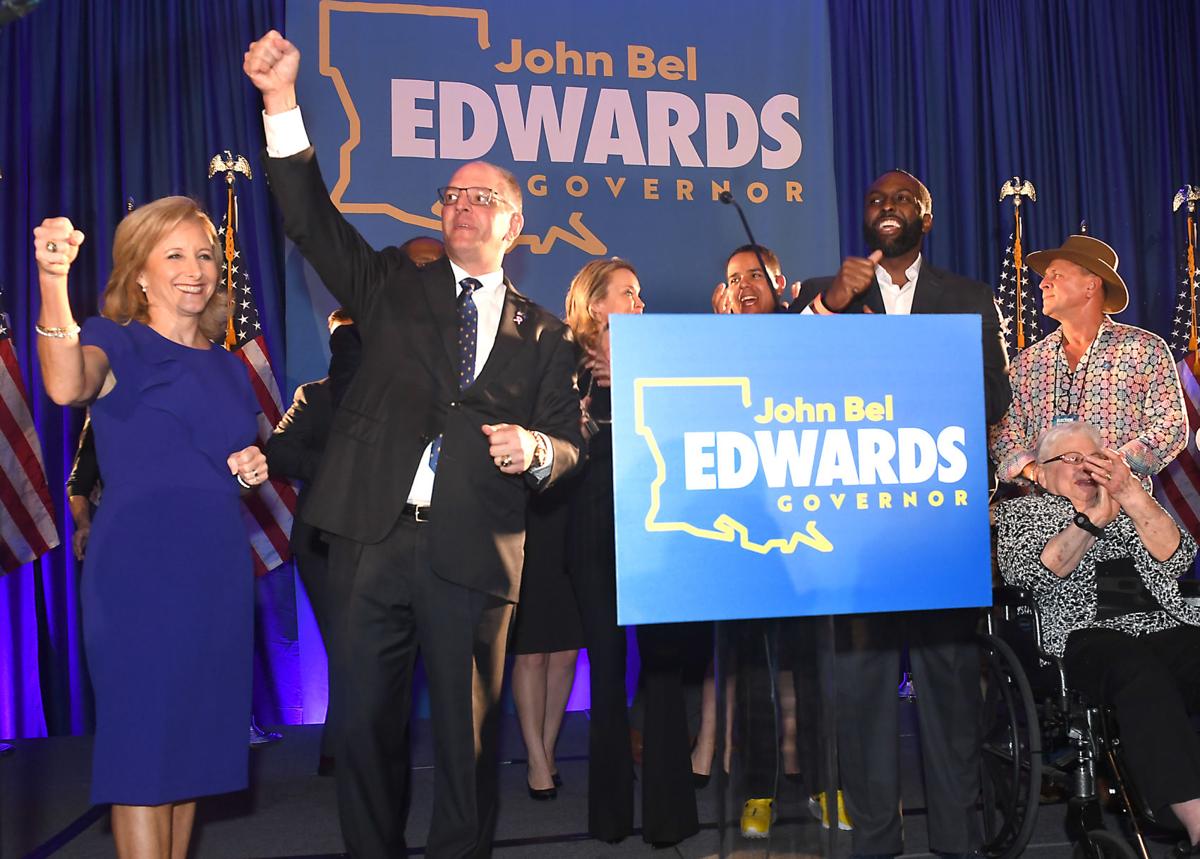 Gov. John Bel Edwards acknowledges supporters after taking the stage to speak at his relection party at the Renaissance Hotel Saturday night. 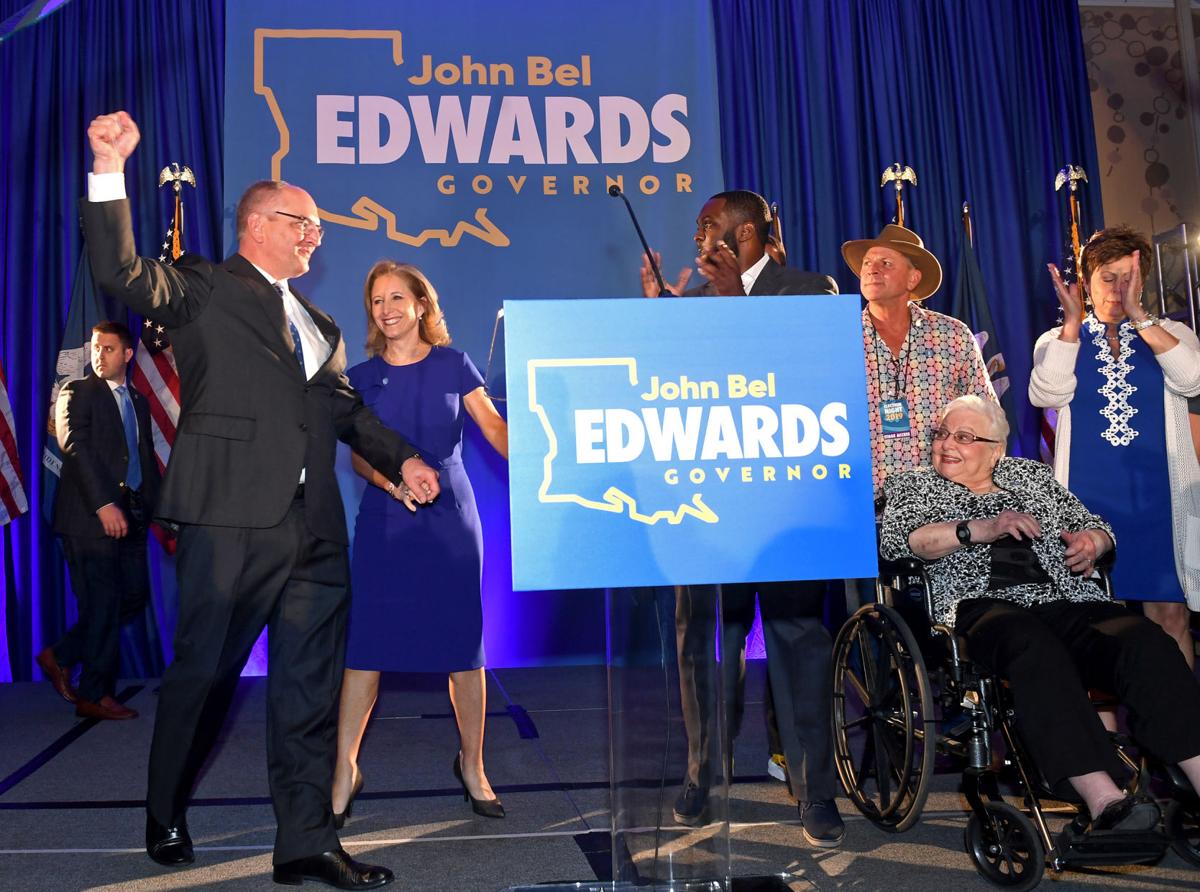 Gov. John Bel Edwards and his wife Donna take the stage before addressing supporters at his election party at the Renaissance Hotel Saturday night. 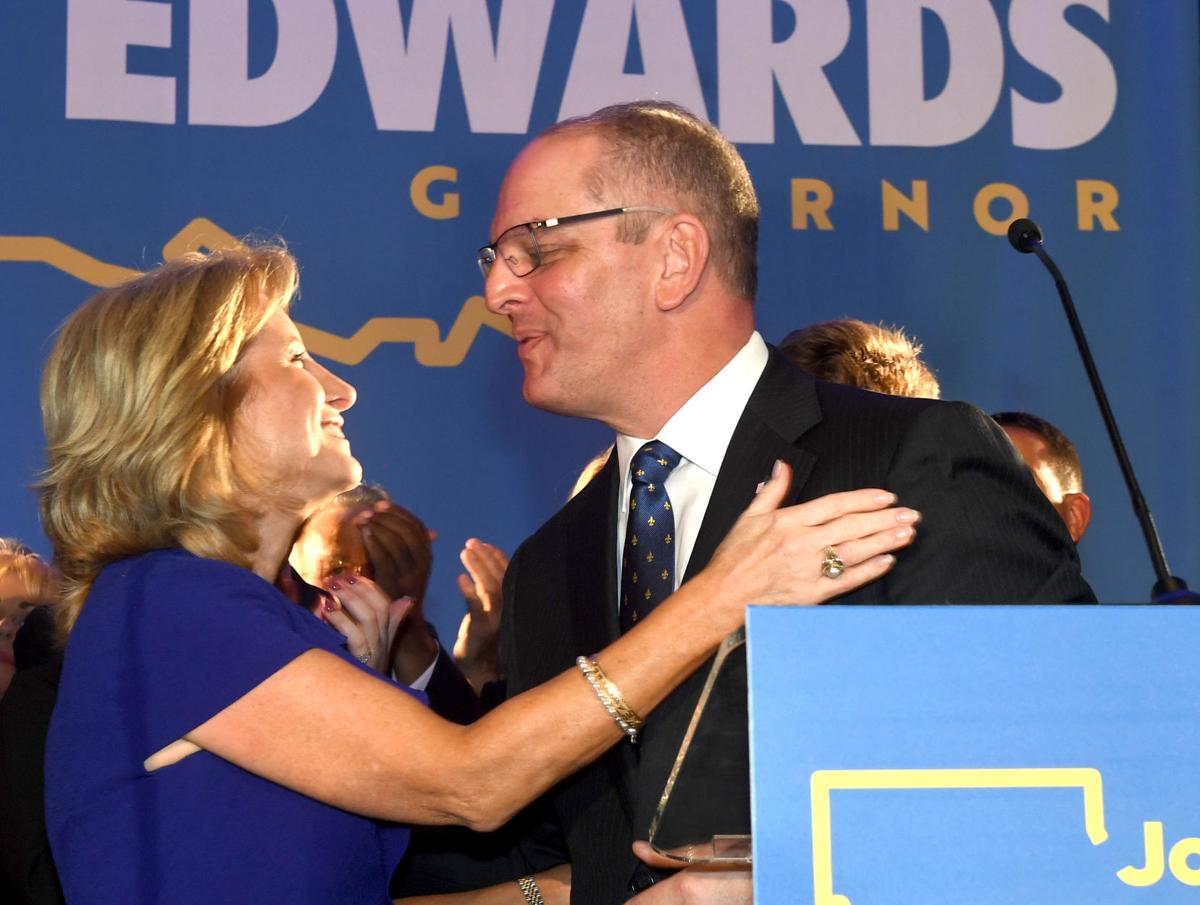 Gov. John Bel Edwards gets ready to kiss his wife Donna at his /election party at the Renaissance Hotel Saturday night. 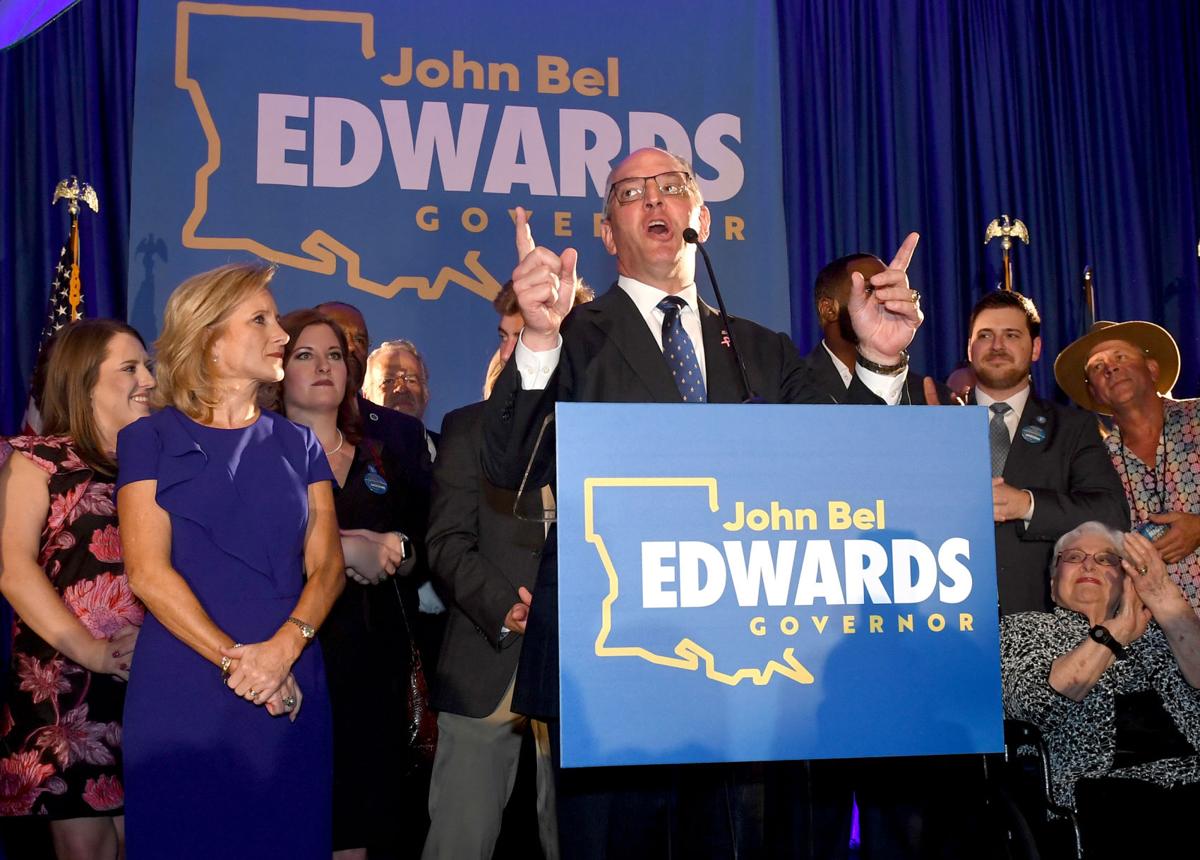 Gov. John Bel Edwards, surrounded by family and friends, addresses his supporters at his /election party at the Renaissance Hotel Saturday night. 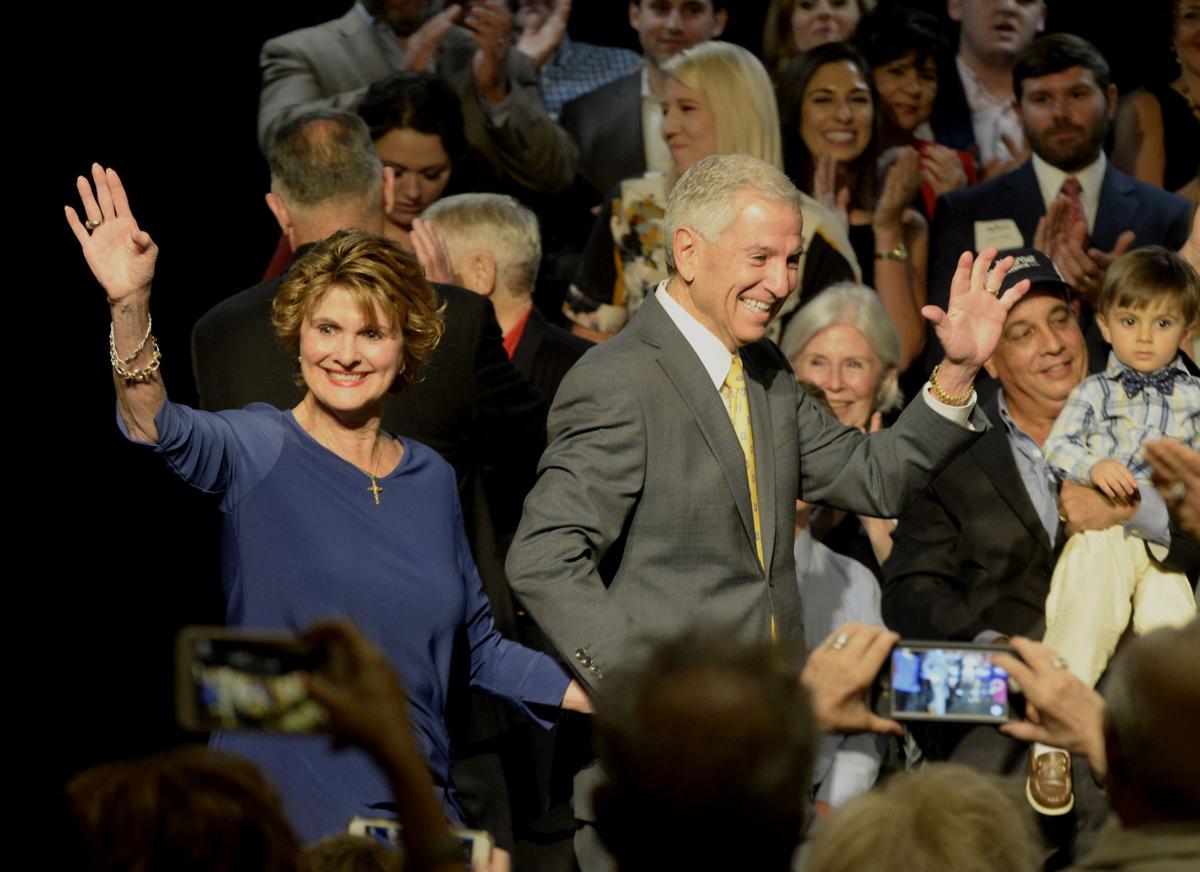 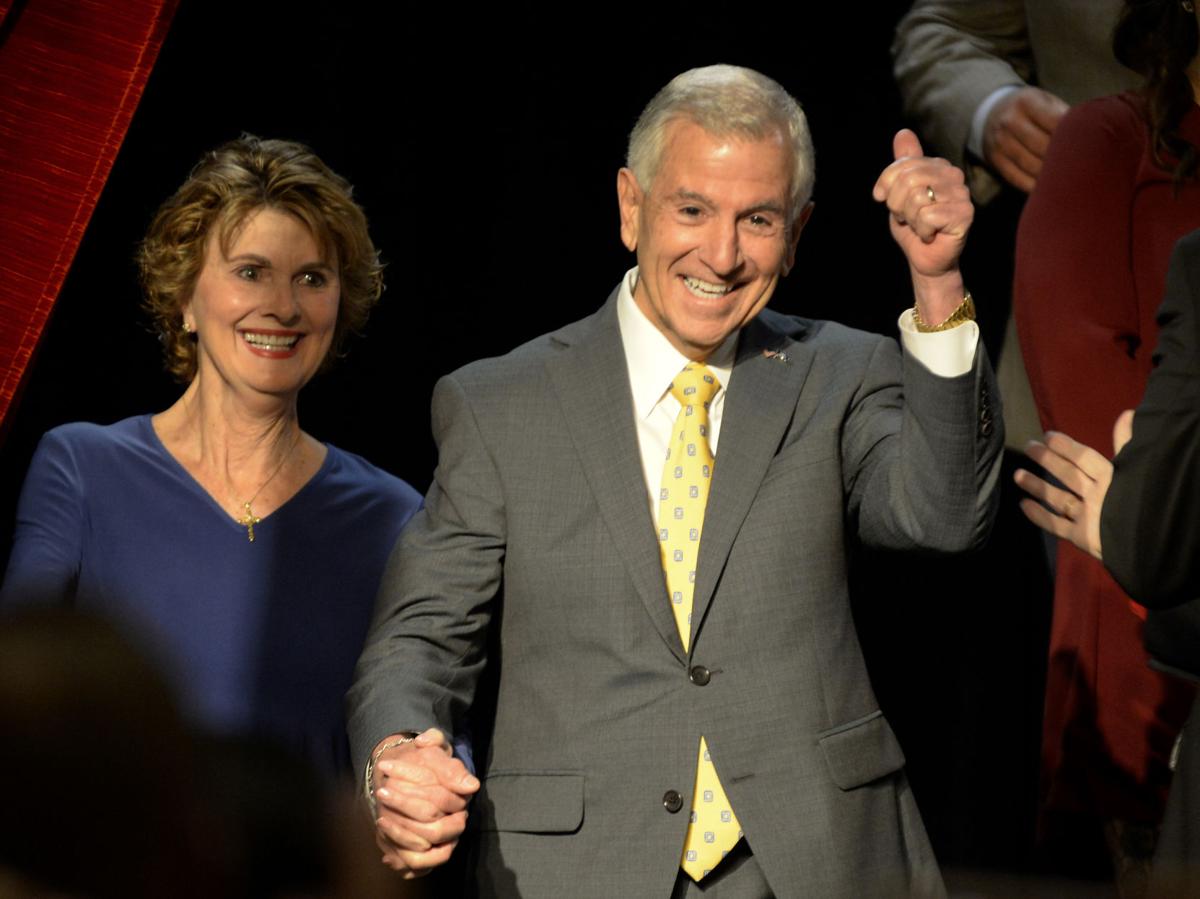 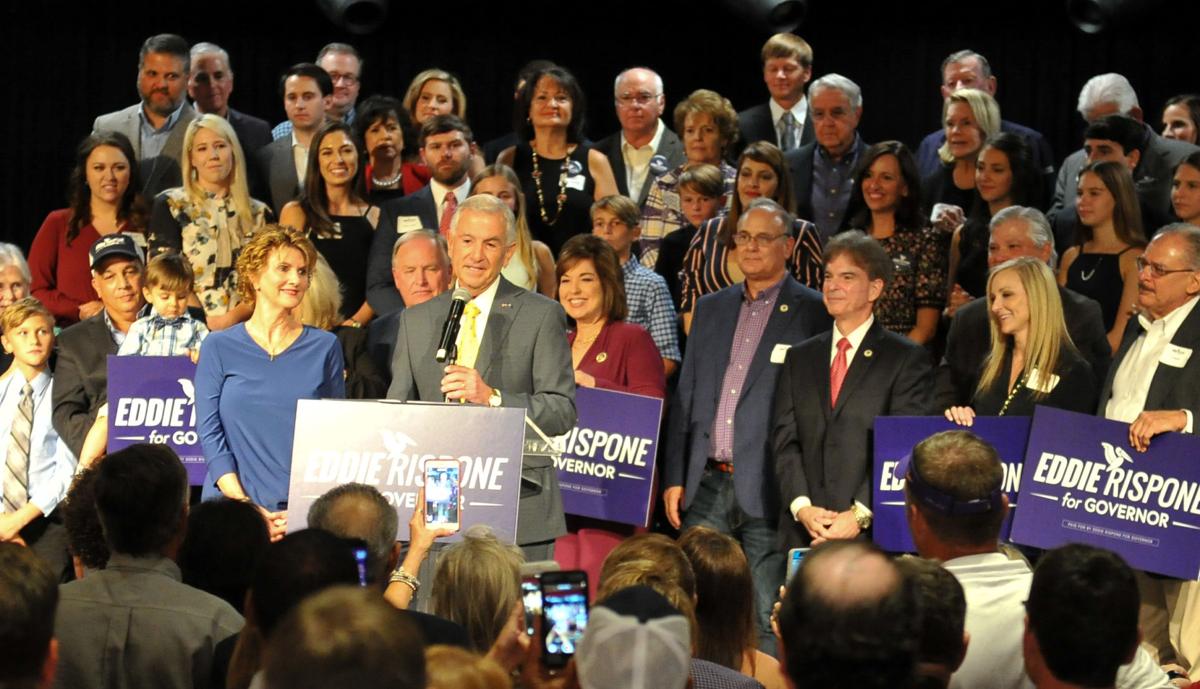 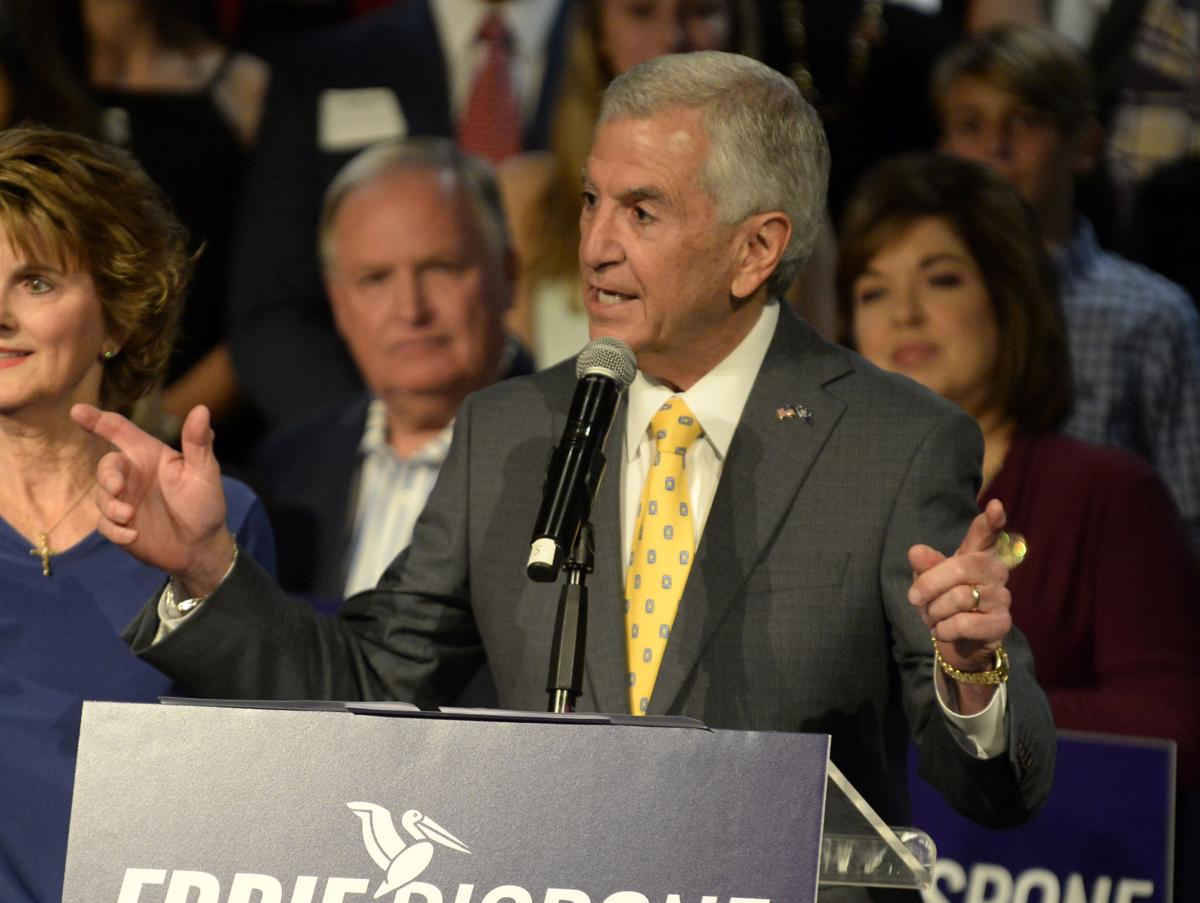 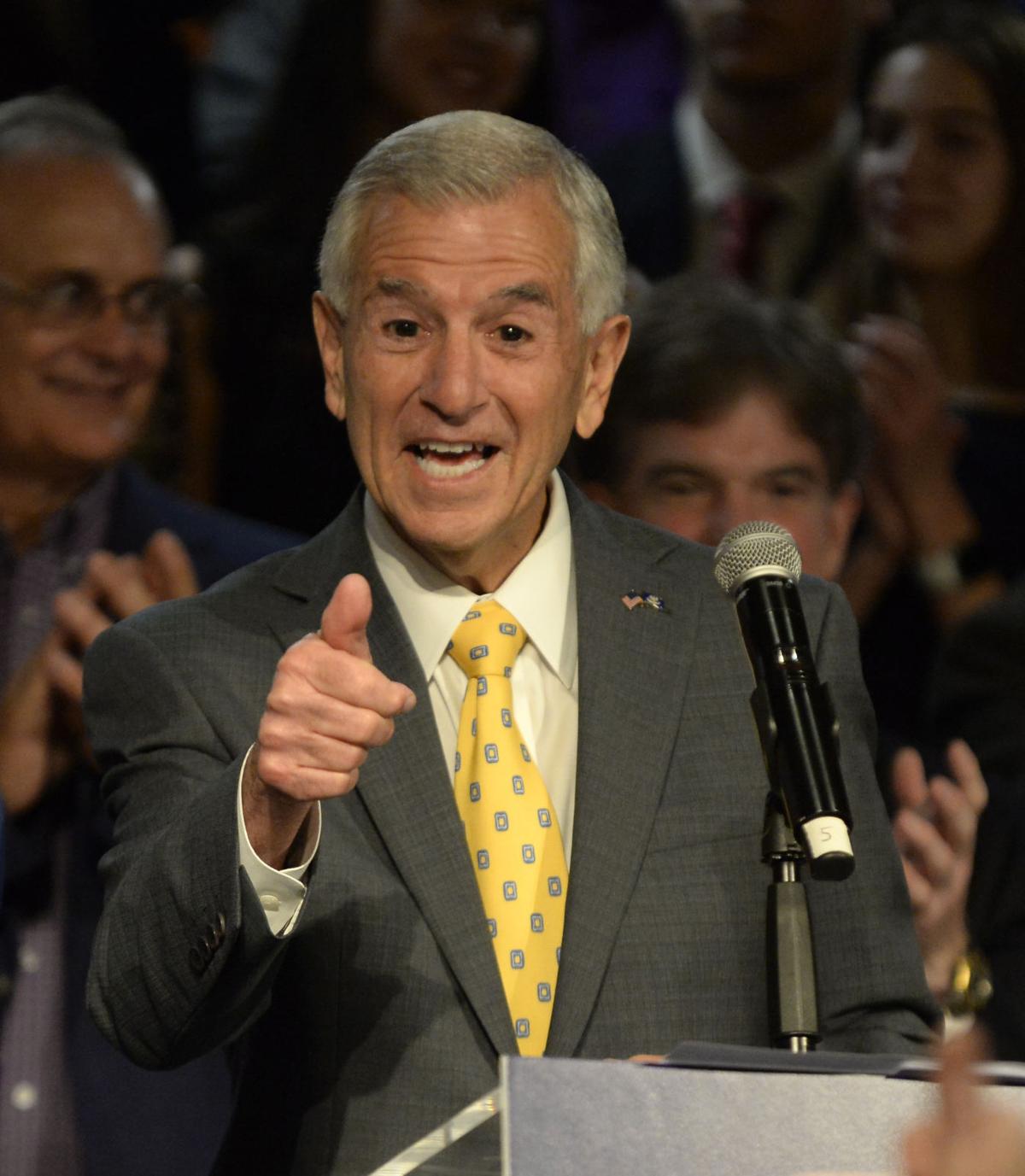 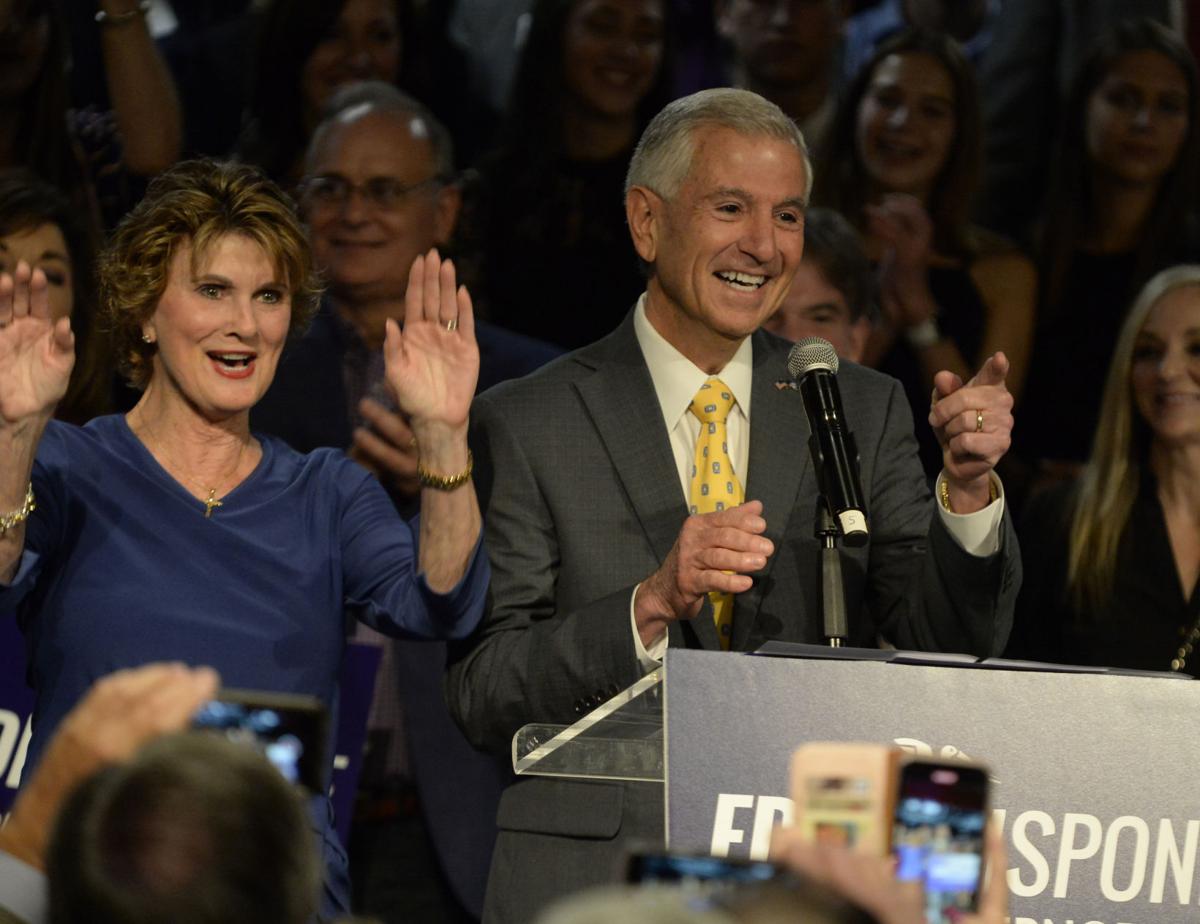 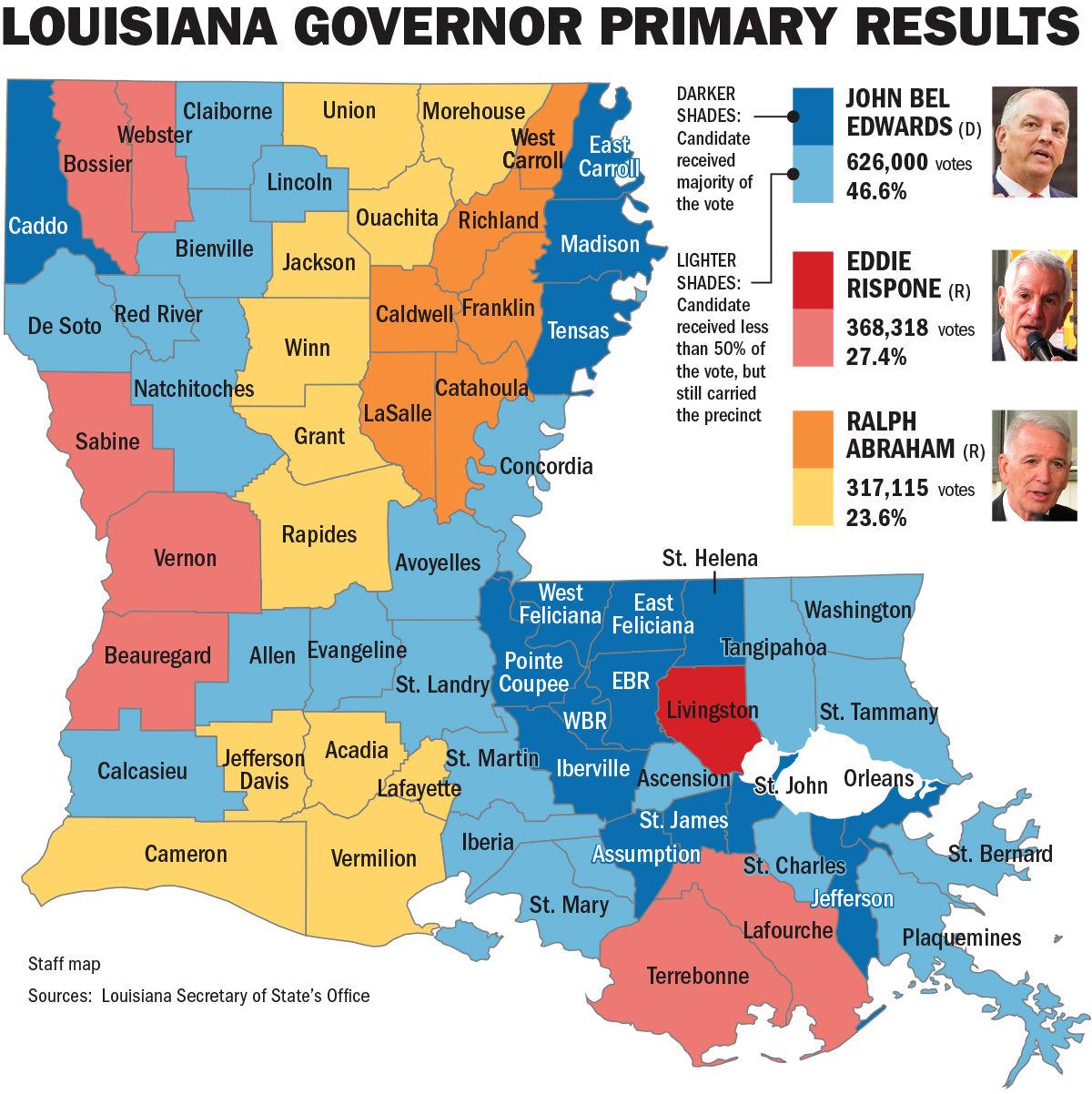 Gov. John Bel Edwards acknowledges supporters after taking the stage to speak at his relection party at the Renaissance Hotel Saturday night.

Gov. John Bel Edwards and his wife Donna take the stage before addressing supporters at his election party at the Renaissance Hotel Saturday night.

Gov. John Bel Edwards gets ready to kiss his wife Donna at his /election party at the Renaissance Hotel Saturday night.

Gov. John Bel Edwards, surrounded by family and friends, addresses his supporters at his /election party at the Renaissance Hotel Saturday night.

By a margin of about 50,000 votes, Rispone, of Baton Rouge, beat his Republican rival, U.S. Rep. Ralph Abraham, to face off with Edwards, who led the field Saturday night but not by enough to win outright.

Three other candidates together attracted 3% of the vote.

Rispone, who made his devotion to President Donald Trump a key part of his campaign, said he got a congratulatory telephone call from the president late Saturday night.

"Isn't it a great night for Louisiana!" Rispone said after clinching a spot in the runoff. "We're going to turn this state around."

During his remarks, Edwards foreshadowed his message during the runoff – painting Rispone as a clone of former Gov. Bobby Jindal and trying to blunt the impact of Trump by warning against “Washington-style partisan politics.”

"My fellow Louisianians, we are not going back," Edwards told his supporters at his post-election gathering. "That is exactly what Eddie Rispone would have us do. He wants to put us right back on the path that led us straight into the ditch."

Most Republican statewide incumbents win reelection; Ardoin in runoff for secretary of state

Most of the Republican incumbents in statewide positions won reelection Saturday night.

When Abraham conceded Saturday night, he announced that he would endorse Rispone’s candidacy. Abraham said he will continue to serve in Congress.

Active in backroom conservative politics for years — he’s given close to a million dollars in campaign contributions to GOP candidates and causes — Rispone said he threw himself into the race after finding through prayer that he needed to give something back. Through a raft of television commercials, Rispone, 70, introduced himself as an outsider with business skills who would change things, comparing himself to Trump.

While Abraham flew his personal airplane all over the state to festivals, rallies and luncheon events, Rispone eschewed that type of schedule, preferring instead to meet leaders behind closed doors and friendly Republicans at various events, often arriving home in time for bed at 9 p.m.

The 53-year-old Edwards focused on his record over the past four years, including expanding Medicaid health care coverage to include the working poor, and ending years of budget deficits, which was accomplished through negotiation with a Republican-majority Legislature. Once the budget stabilized, he was able to push through the first pay raise for teachers in a decade and provide more money for public schools and colleges.

In what was the only competitive race statewide, other than the gubernatorial contest, three-term Insurance Commissioner Jim Donelon barely he…

He reminded voters that he built bridges with evangelical Protestants and sectors of the business community, which usually opposed his agenda, to pass sweeping criminal justice legislation that shifted from harsh prison-time sentences to rehabilitation programs for some nonviolent convicts, which knocked Louisiana off the top of the list for having the highest incarceration rate in the nation and much of the world.

For much of the campaign, which began in earnest only a month ago, Edwards flirted with the very real possibility of getting 50% plus one vote.

Seeing how close Edwards was to winning outright in the primary, national Republicans — the president, his son Donald Trump Jr. and Vice President Mike Pence — during the past week visited the state to energize Republicans to vote. At the same time, media attacks on Edwards that had been planned for the runoff were run early in hopes of tamping down Democratic turnout.

At a Lake Charles rally Friday, the president likened Edwards to Democratic U.S. House Speaker Nancy Pelosi, who Trump said wants to take people’s guns and impeach him. He asked Republicans to send Democrats a message by firing Edwards.

“Quite frankly, the reason he’s coming is my opponents have failed to inspire the people of Louisiana and excite them,” Edwards said after the final televised debate last week in Shreveport.

Rispone and Edwards meet again five weeks from now on Nov. 16 in a winner-take-all election. Early voting will run from Nov. 2 to Nov. 9.

Historically, runoff elections in Louisiana favor GOP candidates because far fewer voters participate and those who do tend to vote Republican. But Edwards is an incumbent with higher than usual popularity, for a Democrat, among moderate Republicans.

The only Democratic governor in the Deep South and only Democratic leader elected statewide, Edwards has embraced positions, such as anti-abortion and pro-guns, that are at odds with his national party. He worked well with moderate Republicans and proved a steady hand on the rudder through police shootings, deadly attacks on law enforcement, floods and hurricanes.

Kyle Ardoin, Gwen Collins-Greenup again in a runoff for Louisiana Secretary of State

In something of mulligan to last year’s election, Secretary of State Kyle Ardoin ended up in a runoff with Gwen Collins-Greenup, the same Demo…

Many Republicans, however, felt his win in 2015 was something of a fluke as the chief GOP candidate, U.S. Sen. David Vitter, had a prostitution scandal in his past and a history of hardball politics that alienated a cadre of important Republicans.

Still, Louisiana’s Republican A-team chose not to challenge Edwards’ reelection. Attorney General Jeff Landry and U.S. Sen. John Kennedy talked about running but didn’t in the end. Jefferson Congressman Steve Scalise, who as minority whip is the third highest-ranking Republican in the U.S. House, reportedly refused the blandishments of the president on Air Force One when opting out.

That left Rispone and Abraham.

A rural doctor, Abraham was known mostly for attending almost every vote in Congress. He also was the only Louisiana Republican willing to publicly criticize Trump in 2016 for bragging that he could grope women at will because he’s a celebrity.

Both came back to haunt Abraham during the campaign in Rispone’s ads that cast him as not being supportive enough of Trump.

Abraham had nailed down the state’s establishment GOP, winning endorsements from most of the parish party executive committees and a nearly full roster of GOP elected officials. He led Rispone in most polls up until the last couple of weeks of the campaign.

“That’s not what the Republican Party is anymore. This is Trump-land now,” said Roy Fletcher, a longtime political strategist who guided Mike Foster’s campaign for governor. Blue-collar and rural voters who backed Trump are not traditional partisans, but they are conservative and quick to throw out the establishment.

Abraham was never able to raise the kind of money Rispone poured into the campaign, despite having major GOP fundraisers Boysie Bollinger and Joe Canizaro on his side.

The grandson of Sicilian immigrants, Rispone grew up with six people in a one-bathroom house near the plants in blue-collar north Baton Rouge. He and a brother, Jerry, built ISC Constructors to a firm with revenue of $364 million last year.

Though much more soft-spoken and polite than Trump, Rispone upended the Louisiana Republican establishment by running as an outsider willing to blow up the traditional politics and historical governing structure to get things done.

Rispone has said he wants to convene a convention to rewrite the state constitution, which includes funding protections for pensions and K-12 education. But Rispone won’t say exactly what changes he wants to make and, when pressed, chided reporters for asking a “gotcha” question.

Tyler Bridges, Sam Karlin and Will Sentell of the Capitol news bureau contributed to this report

Once the polls close in Louisiana on Saturday night, results will begin to come in for statewide and Baton Rouge-area races in one of the busi…