New Orleans lawyer Derrick Edwards may be leading the polls in the treasurer’s race, but the state Democratic Party leaders are withholding their endorsement of him.

As the only Democrat in the contest, poll after poll shows Edwards has the support of 25 to 35 percent of likely voters – well ahead of his three main Republican rivals in the Oct. 14 contest to replace John N. Kennedy, who stepped down in January to join the U.S. Senate.

The leading Republican – former Commissioner of Administration Angele Davis, of Baton Rouge; state Sen. Neil Riser, of Columbia; and former state Rep. John Schroder, of Covington – changes with every poll. But the pollsters agree that Edwards is likely to win a spot in the Nov. 18 runoff.

With a little more than eight weeks to go, polls are showing marginal differences between th…

Still, the Democratic Party’s executive committee worries about how Edwards would get from 30 percent of the vote to the 50 percent plus one needed to win a runoff from an electorate who overwhelming backs Republicans in most statewide elections.

Though Edwards was the first announced candidate in the race, he hasn’t been campaigning much. He reported $138.20 available in a campaign finance report filed Aug. 8. Plus, because he was late filing, Edwards could face $2,000 in fines from the Louisiana Board of Ethics. 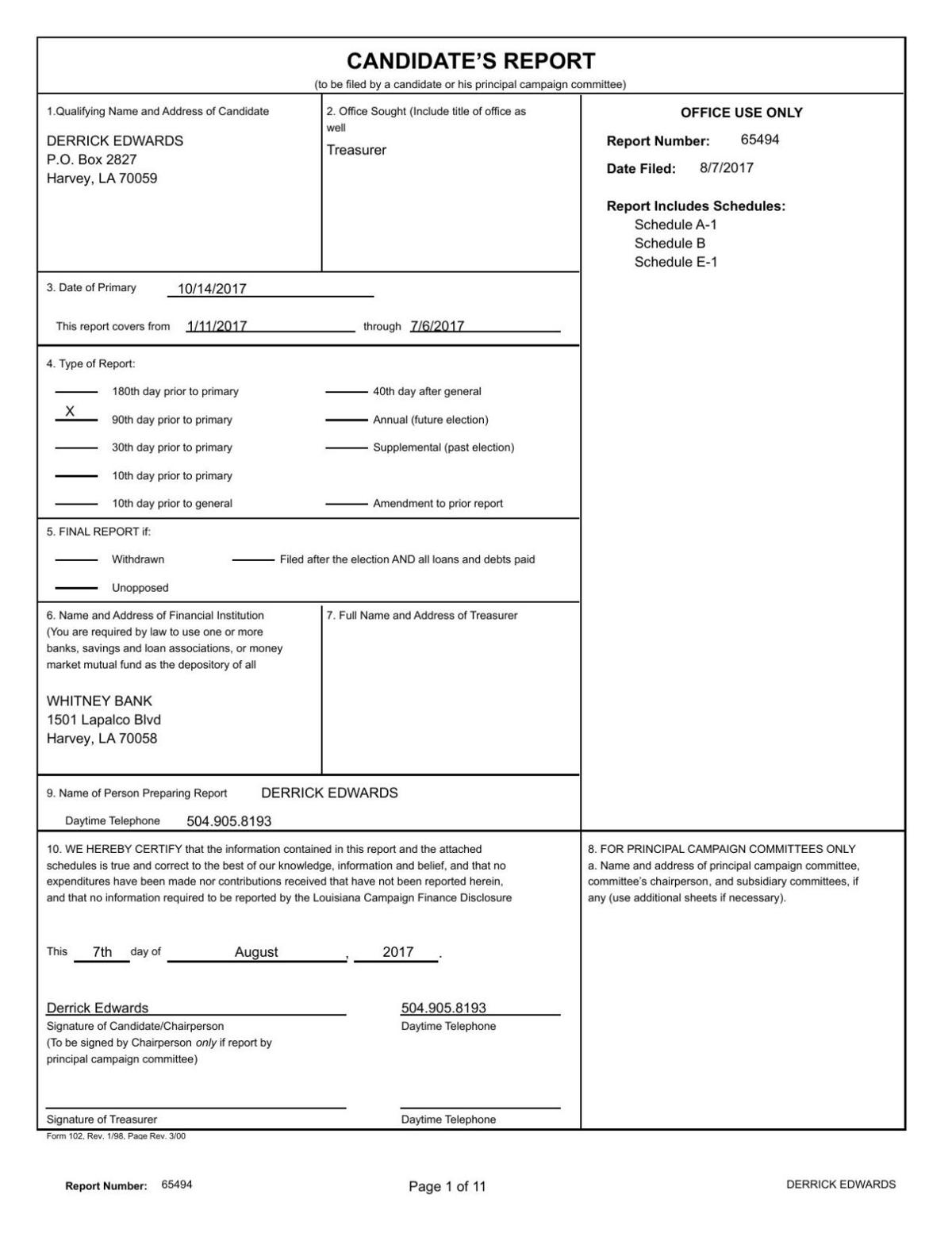 “We were uncomfortable with the fact that he was a little late, at that time, filing his financial disclosure and campaign finance forms,” said Kyle Green Jr., a state party executive committee member from Marrero. “We urged him to get his house in order and once he did that, we would be happy to revisit that decision.”

The 25-member party executive committee decided to hold off until Edwards could name a campaign team, detail fundraising plans, and identify major supporters.

“The executive committee felt rather strongly that Mr. Edwards needs to do some basic things before recommending him for a party endorsement,” said Stephen Handwerk, executive director of the Louisiana Democratic Party.

The leadership votes to recommend a candidate. The full Democratic State Central Committee then votes to do the actual endorsing. Getting the party’s official backing opens the door to voter data and analytics, messaging, and other campaign resources.

When asked for a comment, Edwards said Wednesday afternoon he was going into a meeting and would address the issue later. He then did not respond to two further phone calls and a text message.

“Money is a big issue and quite frankly without money you don’t get your message out. Right now he needs to solidify some fundraising ideas,” said Daniel Banguel, an executive committee member from Baton Rouge. “He has a very inspiring story and he’s very qualified for the position, so I hope he would come back with a pathway to victory.”

Edwards is quadriplegic. He was totally paralyzed when his neck was broken in 1989 during a high school football game. Though some physicians told him he would likely have to be institutionalized, Edwards refused. He went on to earn baccalaureate and masters of science degrees in accounting from Tulane University, then a law degree from the Loyola University New Orleans College of Law. He’s been a lawyer since 2007.

His story has been told on NBC’s The Today Show.

Edwards first foray into public office was a run last fall for the U.S. Senate. He polled 51,774 ballots, or 3 percent of the vote, placing eighth in the 22-candidate race that Kennedy ultimately won.

Stephanie Grace: Sole Democrat in treasurer race is a long-shot, but is still dictating campaign's dynamics

Louisiana's nonparty primary system can make for some pretty weird election scenarios, but this may be a first: The candidate who consistently…

For years, Ron Henson was the one left behind at the Treasury Department when John N. Kennedy went politicking.