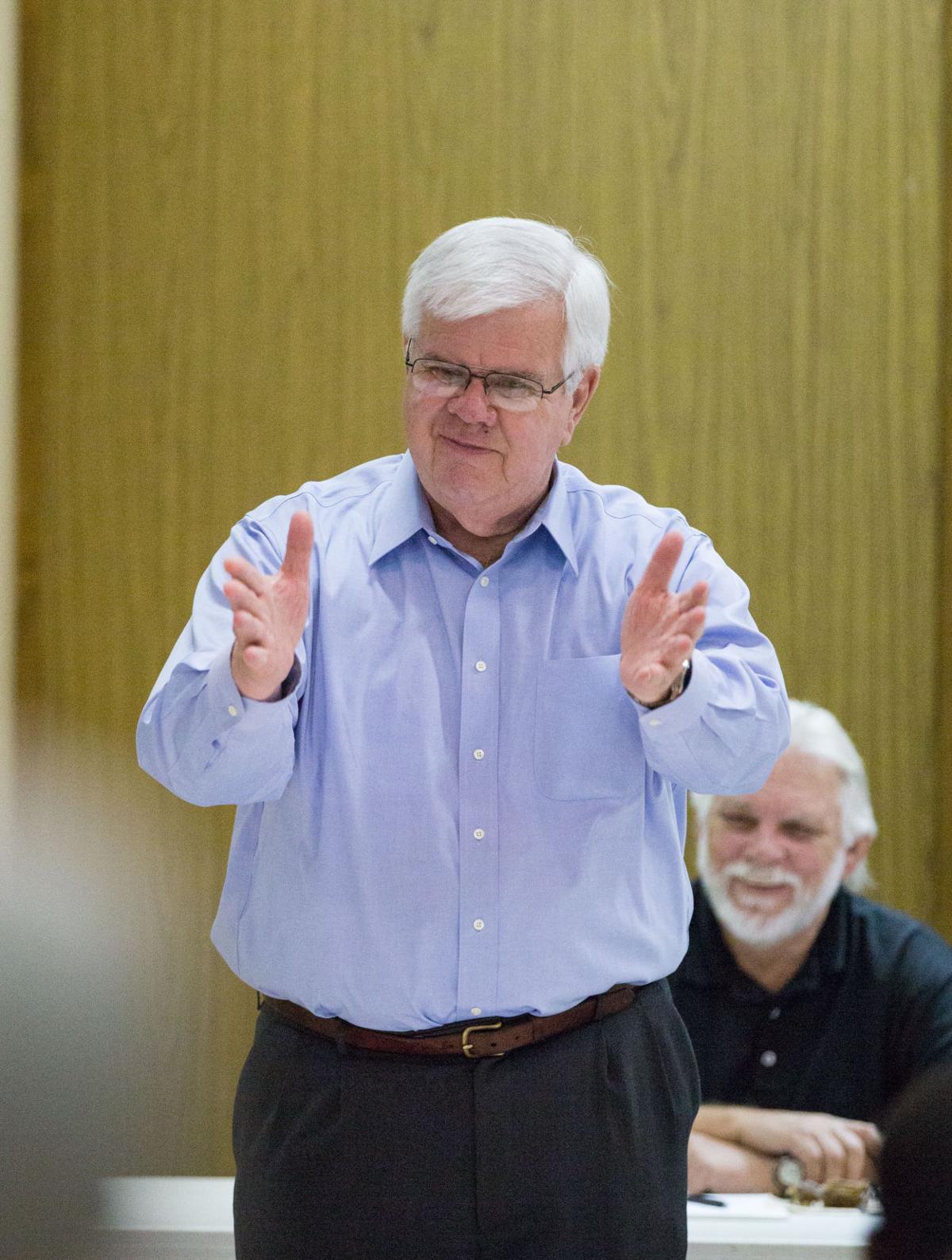 Foster Campbell speaks to leaders of labor unions of the New Orleans area about his campaign as he runs for U.S. Senate, at Plumbers & Steamfitters Local Union 60 in Metairie on September 28. 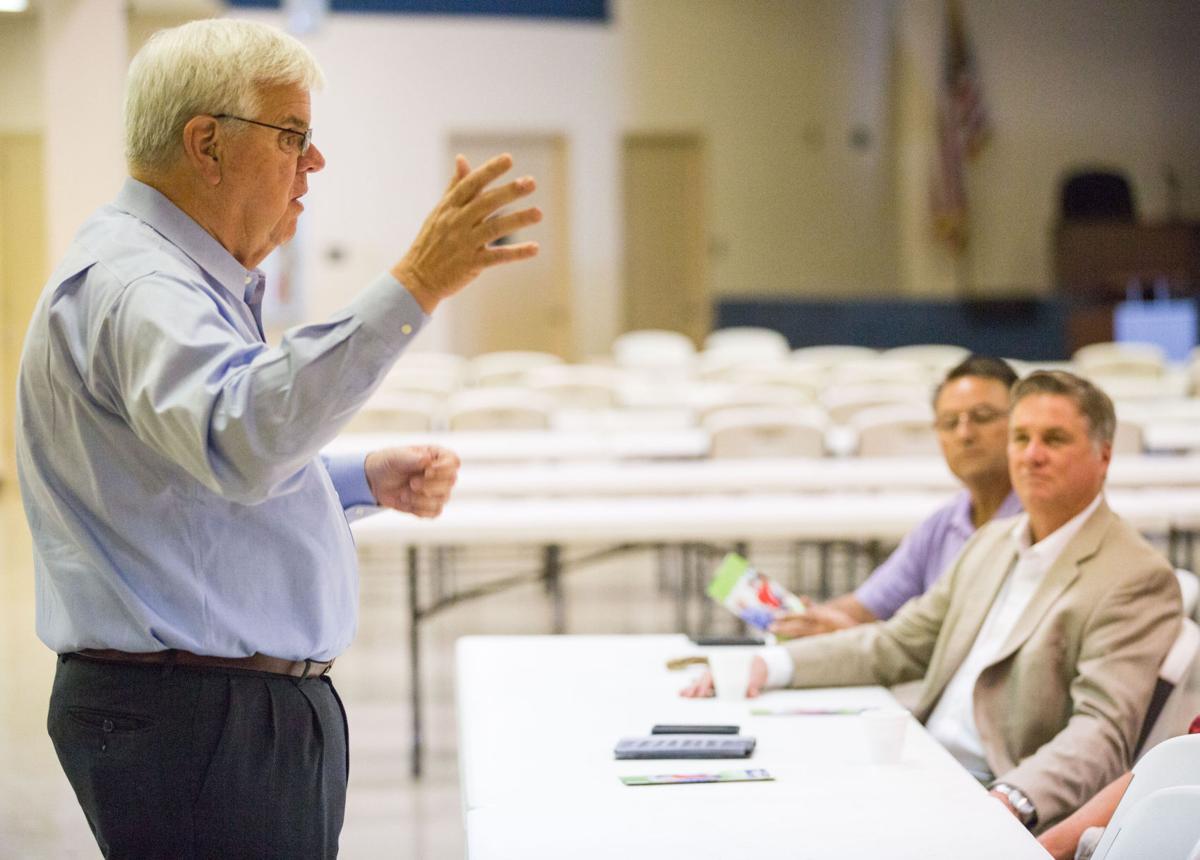 Foster Campbell spoke to leaders of labor unions of the New Orleans area about his campaign as he runs for U.S. Senate, at Plumbers & Steamfitters Local Union 60 in Metairie.

Foster Campbell speaks to leaders of labor unions of the New Orleans area about his campaign as he runs for U.S. Senate, at Plumbers & Steamfitters Local Union 60 in Metairie on September 28.

Foster Campbell spoke to leaders of labor unions of the New Orleans area about his campaign as he runs for U.S. Senate, at Plumbers & Steamfitters Local Union 60 in Metairie.

In a year when being a political outsider is touted as a badge of honor for many candidates seeking elected offices, Foster Campbell embraces criticism from opponents that he's a "career politician."

Campbell has held elected office for 41 years. He had seven consecutive terms as a state senator before term limits. And since 2003, he has been on the Public Service Commission, the body that regulates utilities, phone companies and intrastate trucking.

Campbell, who is running against 23 others for the U.S. Senate seat being vacated by David Vitter, said his longevity in office is nothing to shy away from because his positions have given him the ability over the years to help people and enact changes he otherwise wouldn't have been able to accomplish.

"She would tell me, 'Don't use the word "politician." ' She would say, 'public servant,' ” the 69-year-old Campbell said in an interview, gesturing to a member of his campaign staff. "But I'm not afraid of the word 'politician' because I've been in politics, and I'm proud of what I've done. I'm damn proud of it."

Democratic Gov. John Bel Edwards, whose election last fall surprised many in this Republican-dominated state, has endorsed Campbell, a Bossier Parish Democrat in the populist tradition.

The major Republican and Democratic candidates running for the U.S. Senate divide along part…

Often combative, sometimes profane, Campbell touts his record of fighting for "the little guy" even when it pits him against powerful business interests and other influential lobbying groups.

A graduate of Bossier High School and Northwestern State University, Campbell was a schoolteacher in Plain Dealing in the early 1970s. He says that work, before he began his political career, helped shape his views on public education.

When he was a state senator, he helped pass a law that created an endowment fund for the Bossier Parish school system with money from gaming revenues. The school fund has about $43 million today.

He later re-created the success of that program with all schools in the state. After Louisiana sued cigarette companies in the late 1990s, Campbell sponsored legislation to use $1 billion of the state's tobacco settlement to create another endowment, which allocates interest earnings to schools in every parish and also helps fund the Taylor Opportunity Program for Students, the college tuition scholarship better known as TOPS.

As an elected member of the Public Service Commission, Campbell challenged powerful sheriffs to eliminate many of the fees tacked onto phone calls inmates make from parish jails.

Every time a Louisiana prison inmate picks up a telephone and places a call, it’s money in t…

Sheriffs receive a cut of those fees, and some of their offices have come to rely on that revenue. The lawmen and their lawyers showed up in force every time Campbell brought up the issue before his often reluctant colleagues on the commission. Aside from ministers and bishops, few were willing to champion the convicts' families, who are usually lower-income.

"If a person in jail wants to talk to his wife or kids or grandkids, I think he ought to be able to do it," Campbell said. "I believe in rehabilitation, and I believe communication helps."

Ultimately, the commission limited some of the costs.

Although Campbell represents northern Louisiana on the commission, he said he also has a record of fighting for the interests of residents in the southern part of the state. After Hurricane Katrina, he used a sensational photograph of a room filled with snakes to help lobby the Federal Communications Commission, which directly regulates cellphones (the state commission regulates landlines), into sending $39 million in phones, free minutes and communications improvements.

And after the floods in south Louisiana this summer, Campbell wrote the FCC to push the cause of people who had cellphone overage charges during the emergency. Verizon provided free service for a week, and AT&T waived overage charges for a week.

Foster Campbell endorsed by environmentalists in US Senate bid

In 2007, when he ran as a long-shot candidate for governor, the centerpiece of his campaign was his support for a $5.5 billion tax on oil and natural gas that comes from outside of the state but is processed in Louisiana.

"I'm not one to worry about big business," he said. "I’m worried about working people and how to make the state better for them."

Campbell said big businesses and industry lobbyists with deep pockets have too much influence over state legislators and politicians.

But Campbell, as a member of the Public Service Commission, accepts many donations from the utility companies he regulates, says his chief Democratic rival, Caroline Fayard, a New Orleans lawyer.

Campbell has said there should be laws to prevent people from taking money from the groups they regulate, but that without donations, only the wealthy who could self-finance their campaigns could run for office.

The Public Service Commission is a five-member elected board that oversees what customers pay for electricity. But the commission generates little interest from the public, aside from the 200 or so high-priced lawyers and lobbyists with a stake in the outcome of complex debates where engineering and high finance intersect.

In 2013, New Orleans-based Entergy Corp., which sells electricity to about half the state’s customers, asked for a rate increase. Campbell pushed for the company to instead lower its guaranteed profit margin, which reduced utility bills for many, he said.

Fayard has pointed out that Campbell has received money from Tommy Sparks, the CEO of the Greater Ouachita Water Co. Some customers are suing the company because of concern that the disturbing brown water that comes from their faucets is not safe.

Campbell's team noted that although Sparks donated $7,000 to him, the company, which is regulated by the commission, still has been pressured to spend more than $17 million in sewer upgrades to address the water problems by replacing wastewater pumps, and improving sewer infrastructure and carbon filters.

Priorities for the Senate

Campbell said that if he wins the Senate seat, he intends to fight for a minimum wage increase. He said in Louisiana, the minimum wage should start at $10 per hour but be scaled up to $12 per hour within the next few years.

He said he will fight for paid maternity leave and for more funding for K-12 education in states like Louisiana, where he believes the needs are greater because of deeper poverty. He also wants to increase industry regulations to combat global warming and encourage more clean-energy options, such as solar and wind power.

Campbell is an avid hunter with a collection of guns. He said he strictly opposes additional regulations on gun owners.

He said that during his years in office, he often has been on the losing side of battles but that he's never been on the wrong side. And he said he intends to continue to fight for the little guy in Washington, D.C.

"I've been criticized and I've been laughed at, but I'm right," Campbell said.

Early voting for the Nov. 8 election begins Oct. 25 and continues through Nov. 1. Should no candidate win a majority on Nov. 8, the top two vote-getters, regardless of party, will face off in a Dec. 10 runoff.

Political Experience: Louisiana State Senator for seven terms, member of the Public Service Commission since 2002. Ran and lost for governor in 2007, and ran and lost for Congress three times between 1980 and 1990

What do goats, second-lines, early voting have in common? Senate campaigns attempting to mobilize voters

A U.S. Senate campaign that has yet to excite the public hits the home stretch this weekend with the candidates trying to turn out their suppo…

Though considered a toss-up for weeks, when the votes were counted Tuesday night, the U.S. Senate race narrowed to the two candidates predicte…