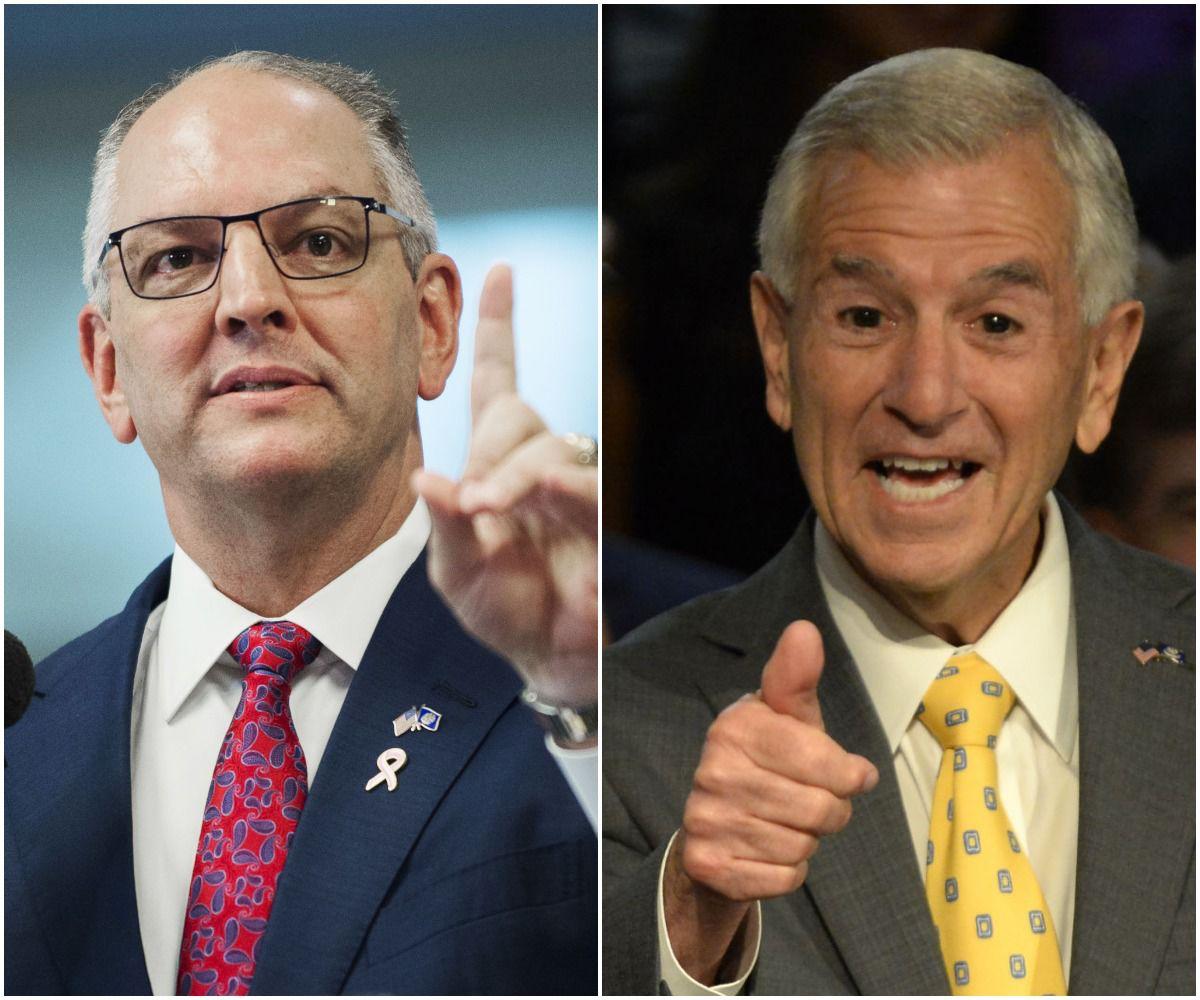 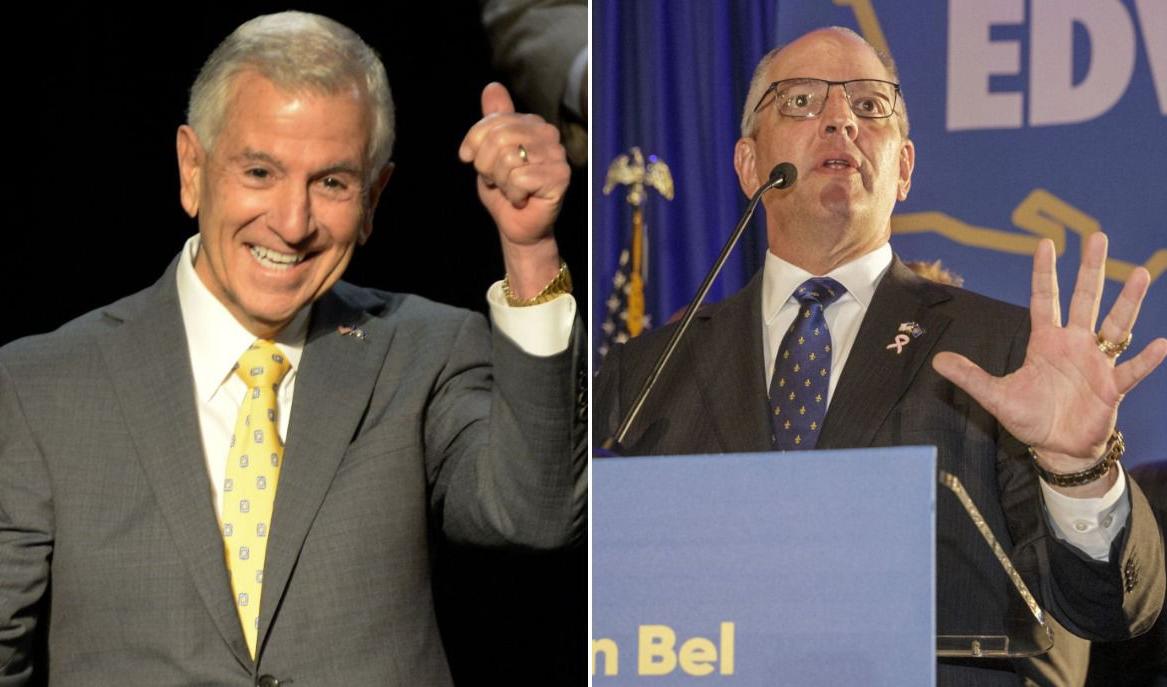 Rispone repeatedly countered that the state’s economy ranks 50th among the states, “dead last,” as he put it.

The two candidates for governor are painting in sharply different hues as they describe Louisiana’s economy in the final stretch of the campaign before the decisive Nov. 16 runoff.

Edwards is painting a rosy picture by selectively citing a number of statistics that have been released by federal agencies during the tenure of President Donald Trump.

Rispone, who has sought to tie himself to Trump, erroneously said Wednesday night that the statistics Edwards was touting date from 2012.

The main source for Rispone’s grim image appears to be a May 2019 U.S. News & World Report ranking of the 50 states. But the ranking uses data in part from 2015 and 2014, when Bobby Jindal was governor, according to the publication. Edwards took office in January 2016.

Throughout the debate, Rispone touted his job-creating skills as the owner of ISC Constructors, which provides electrical services during the construction of refineries and big industrial projects.

At one point, he pledged that he would create 25,000 jobs over a full four-year term. But if he delivers on that promise, he wouldn’t match the pace of job creation over the past two years of Edwards’ tenure.

The Edwards campaign provided a slew of facts and figures to document the governor’s comments Wednesday night.

The Rispone campaign didn’t respond to requests for the candidate’s sources of information.

To be sure, Louisiana’s economy has grown slowly over the past year, as have the number of new jobs, statistics show. Louisiana also long been among the lowest-performing economies in the nation, by several measures.

LSU economics professor Jim Richardson and Greg Albrecht, the Legislature’s chief economist, pin the blame for the slow growth on the price of oil, the Trump administration’s trade war and a drop off of industrial construction projects in south Louisiana.

John Bel Edwards, Eddie Rispone blast each other during only runoff debate

In the debate, Rispone repeatedly blamed the state’s economic weakness on Edwards’ friendless with trial lawyers and tax increases approved by the governor and the Republican-majority Legislature. Rispone didn’t note that the tax increases turned the state’s budget deficit into a surplus and led Moody’s Investors Service in September to upgrade the state’s credit outlook from “stable” to “positive.”

Richardson and Albrecht both say that a governor has little control over the state’s economy in the short term.

State officials “can’t stimulate the economy through tax and spending policies because they have to run a balanced budget, unlike the federal government,” Albrecht said.

But he and Richardson both said they understand that the two candidates will inevitably point to various economic statistics in making their case to voters.

During the debate, the governor made several claims that are backed up by data from the Bureau of Economic Analysis, part of the federal Department of Labor.

“This idea that Louisiana isn’t doing so much better than we were doing four years ago is just absolutely preposterous. It’s made-up,” Edwards said during the debate. “Mr. Rispone is lying now about my record.”

Rispone interrupted Edwards at another point when the governor was touting the positive economic numbers.

Are jobs up or down in Louisiana? Gov. John Bel Edwards and Republicans cite competing numbers

The latest jobs numbers for Louisiana were announced Friday, and they immediately became a political football in the governor’s race.

Edwards then cited the Bureau of Economic Analysis as his source.

“That hasn’t been updated since 2012,” replied Rispone, incorrectly. The bureau updates its numbers throughout the year.

“I went and looked at that. It has not been updated since 2012,” replied Rispone again.

Rispone’s misstatements led the Edwards campaign on Friday to send the Bureau of Economic Analysis statistics to the Rispone campaign.

"Eddie Rispone is entitled to his own opinions, but he's not entitled to his own facts," Edwards said in a written statement sent to reporters. "His campaign is so out of touch that he doesn't even know where to look to gauge how well Louisiana's economy is doing. The Trump Administration lays it out very clearly, and I am happy to provide him with this information.”

The Rispone campaign did not respond to Edwards on Friday.

Throughout the debate, Rispone said that Louisiana’s economy is lagging behind the national economy.

“The economy is booming in the United States, but it is not booming in Louisiana,” he said. “We’re falling behind everyone else. We’re the only state that is losing jobs.”

But Louisiana’s economy has been creating jobs during the past three years.

Richardson and Albrecht say that Edwards took office when Louisiana’s economy was declining because of the drop in oil prices, from over $100 per barrel to about $54 per barrel in 2015. Albrecht said the number of jobs in Louisiana bottomed out in August 2016 and has been growing since then, albeit slowly, by about 0.5% per year.

Louisiana’s economy and state finances have turned around during his 3½ years in office, Gov. John Bel Edwards tells voters constantly as he s…

Rispone correctly noted that Louisiana has about 10,000 fewer oil sector jobs than before.

“We have great oil and gas potential here but we’re killing thousands and thousands of jobs in the oil and gas industry because of lawsuit abuse, because of the liberal trial lawyers that he’s close to,” he said at one point.

The economists point to other factors.

“That’s all oil price driven,” Albrecht said about the jobs loss in the energy sector. “No government is going to change that.”

Rispone told viewers Wednesday night that the state’s economy will flourish under him.

“I understand job creation because I’ve created thousands of jobs myself,” Rispone said, adding that he has a plan to create 25,000 jobs before the end of his first term. He did not reveal the details of that plan.

The 25,000 new jobs over four years would mean an addition of 6,200 per year, or an increase of 0.3% annually. That’s less than the 0.5% growth the state has seen over the past two years under Edwards.

When the governor cited the federal figures, Rispone repeatedly interrupted to say that Louisiana ranks 50th.

“The U.S. News and World Report listed us last in everything that matters,” Rispone said.

The publication’s May 2019 “Best States” report, which listed Louisiana’s overall rank as 50th, based its rank on eight different measures.

On three of those measures – “Opportunity,” “Crime & Corrections” and “Natural Environment” – Louisiana was indeed last.

WASHINGTON — President Donald Trump will hold a rally in Monroe on Wednesday in support of GOP gubernatorial candidate Eddie Rispone, who is h…

Louisiana ranked 49th in “Economy,” not 50th as Rispone repeatedly stated, although Edwards seems unlikely to challenge him over that. In the other four measures, Louisiana ranked 43rd to 48th.

A bigger flaw with Rispone’s citation of the U.S. News rankings was that they were based on old data, some of it from before Edwards’ tenure, when Louisiana was in a mini-recession.

The publication relied on statistics from 2016 for tax burden, from 2015-17 for business environment, from 2014-17 for employment and from 2014-17 for growth, said Maria Santucci, director of Strategic Communications for U.S. News and World Report.