By the time qualifying in the Louisiana governor’s race ends on Thursday, the Republican Governors Association, a national group based in Washington, D.C., will already have spent $1 million on the race.

Louisiana is the only opportunity in 2019 for the group to flip a state’s governorship from blue to red, particularly since Edwards is the only Democratic governor in the overwhelmingly Republican Deep South.

GOP operatives expect the RGA will spend several million dollars to influence the race, but they won't be alone.

A host of political action committees for various interests are pouring millions of dollars into the state to sway the outcome. Contributions given directly to candidates are limited by law. But Super PACs and political foundations are allowed to raise unlimited sums of money. Though the Super PACs can't coordinate directly with the campaigns, they do advocate, often harshly, on behalf of their favored candidates' causes and against those of their opponents.

Edwards, who is seeking re-election, faces two Republicans – U.S. Rep. Ralph Abraham, of Alto, and Baton Rouge millionaire contractor Eddie Rispone – in the Oct. 12 open primary. If no candidate wins more than 50% of the ballots, the top two vote-getters will meet again in a November runoff.

Some of the organizations involved, often called "dark money groups," are not required to disclose their donors — and don't — making it unclear who exactly is paying to influence the election.

But a review of campaign finance records shows a wide range of business interests, mega-donors and several national organizations are writing large checks to unseat Edwards, or to keep him in the governor’s office.

A PAC allied with Abraham, called Securing Louisiana’s Future, has begun ramping up fundraising, posting $275,000 in contributions during the second quarter. Meanwhile, Gumbo PAC, which is supporting Edwards, had about $2.7 million in the bank. All of the groups could double or triple their money overnight with large donations.

American Bridge 21st Century, a liberal Super PAC based in D.C., has "trackers" following Republican candidates on the campaign trail and is releasing a steady drip of attacks on Abraham and Rispone through emails, Twitter and other digital platforms.

Truth in Politics, a 501(c)(4) run by Baton Rouge contractor and GOP donor Lane Grigsby, who is supporting Rispone, is directing its sniping at Edwards.

G. Pearson Cross, a political science professor at the University of Louisiana at Lafayette, said these third-party groups are operating with a “different dynamic” this year than in the 2015 election. In the last gubernatorial election, the Democratic Governors Association focused on protecting incumbents and did not donate to Gumbo PAC until after Edwards' long-shot candidacy won a place in the runoff. That has changed this time.

“Part of that is because there aren’t that many gubernatorial elections in 2019,” Cross said. “And part of that is John Bel Edwards has a good shot to repeat as the only Democratic governor in the Deep South.”

Edwards’ position — a rare Democrat holding the most powerful office in a state that voted for Donald Trump by 58% — has attracted national attention.

Labor unions, industrial corporations and trial attorneys are among those who have written checks exceeding $100,000 to Gumbo PAC, the Super PAC that played a crucial role in taking down Republican David Vitter, a U.S. senator who was expected by many in 2015 to easily win the governor's race.

The biggest donor to Gumbo PAC in 2015 was the Democratic Governors Association. The group spent a little more than $2 million and could well exceed that amount this year, as it has begun spending far earlier.

Since the 2015 election ended, Talbot Carmouche & Marcello, a Baton Rouge law firm representing local jurisdictions seeking damages in court on allegations that oil and gas producers harmed coastal wetlands, has donated $200,000 to Gumbo PAC. A PAC controlled by the International Brotherhood of Electrical Workers, a major labor union in Louisiana, has poured in $100,000 to Gumbo PAC.

Texas Brine Co. LLC, a Houston-based firm at the center of the infamous 2012 Bayou Corne sinkhole, has donated $160,000 to the committee. Rain CII Carbon, a Covington-based industrial firm, and Houston-based Tellurian Services — both of which have been approved for millions in tax incentives — donated $120,000 and $110,000, respectively. Companies controlled by private equity magnate and prominent Democrat Jim Bernhard have donated tens of thousands of dollars.

Gumbo PAC, run by Democratic operative Trey Ourso, is based in Baton Rouge. It has already begun attacking Rispone and Abraham on digital platforms. Ourso said in a recent interview that Edwards’ side will have “ample resources,” and that the DGA will be ready to pitch in as the race heats up.

A handful of rich businessmen in north Louisiana, along with retired south Louisiana shipbuilder Boysie Bollinger, a longtime rainmaker in GOP politics, are funding Securing Louisiana’s Future PAC, which is dedicated to electing Abraham. Bollinger donated $105,000 to the Securing Louisiana’s Future PAC and also heads a campaign finance committee for Abraham. Frank Maxwell, a Delhi businessman, was the PAC’s top donor at $125,000.

Republican officials in Louisiana have warned Republican candidates against going negative against each other. A digital ad by Securing Louisiana’s Future that took a soft punch at Rispone drew criticism and attention in the local political sphere.

Meanwhile, Rispone ally Grigsby says he will be involved in the governor’s race with his Truth in Politics, which was formed as a way to hammer the Democratic governor and his legislative agenda. Because it is a nonprofit and is not required to disclose funders, Grigsby’s organization has more restrictions on promoting or attacking candidates. Rispone does not have a Super PAC aligned with him so far.

“I would assume if there’s somebody out there with a lot of money that wants to support Eddie Rispone, they’ll form a super PAC and support him,” Grigsby said. “That’s the way America works.”

These Super PACs are not bound by the $5,000 donation limits that are placed on the candidates’ actual campaigns. They can raise millions of dollars overnight from big-money donors. However, they are prohibited from coordinating directly with the campaigns.

So-called “dark money groups,” usually organized as 501(c)(4) nonprofits, have more restrictions — they cannot advocate for voting for a specific candidate — but don’t have to disclose who their funders are.

Cross, of ULL, said there are still ways for PACs to coordinate with candidates. For instance, the people running them can strategize directly with the candidate up until they form the Super PAC.

The biggest role the organizations will play this year is in going after the 8% to 12% of the voters who could break either for or against Edwards.

“I don’t think they can change the dynamic of race and party politics in Louisiana,” Cross said. “But you can affect the group of independents who really haven’t made up their mind yet or who aren’t in either camp.”

Republicans involved in the race say they expect the RGA to spend heavily here. The group would not disclose what it plans to spend, but it recently announced it raised $30 million in the first six months of the year, ahead of the pace it set in 2015.

“In a state that is historically challenging for incumbents, Gov. Edwards faces an unenthused base and a Democratic Party increasingly out of touch with the vast majority of Louisiana voters,” said Amelia Chassé Alcivar, a spokeswoman for the RGA. “Electing a Republican governor to break through the Edwards malaise and get Louisiana’s economy moving is a top priority, and we are confident we have the resources to win.”

The organization’s rival, the Democratic Governors Association, is likewise expected to focus heavily on helping the incumbent Edwards, during a year when only three states – Louisiana, Kentucky and Mississippi – are holding elections for governor. David Turner, a spokesman for the group, said it “strongly supports” the governor and pointed to the state’s budget surplus, Medicaid expansion and economy.

“The truth is he’s only just getting started, and we know he will be able to build on that progress with a second term,” Turner said.

While Talbot, Carmouche & Marcello has already donated heavily to Gumbo PAC, John Carmouche, a partner with the firm, said he and his father, Don Carmouche are “standing by” and seeing how the race plays out. The attorneys helped fund attacks on Vitter in the 2015 race.

He also said they will pinpoint 10 to 15 legislative races to get involved with.

Another Super PAC, Louisiana Families First, also supported Edwards in 2015, but when the name expired, it was scooped up by Republican operatives. However, the organization has been dormant and has not yet shown any signs of getting involved in the race.

Rebuild Louisiana, another political nonprofit that supports Edwards’ legislative agenda and was on TV with supportive ads earlier this year, is not expected to get heavily involved in the governor’s race. Emilie Tenenbaum, a senior consultant for the group, said it does not intend to make large TV ad buys in the race.

Baton Rouge millionaire businessman Richard Lipsey, a Republican who supports Edwards, runs another political nonprofit called Put Louisiana First. Lipsey said he is not yet sure what role his organization could play in the race, but he will definitely be involved in opposing the St. George incorporation effort in Baton Rouge, he said. 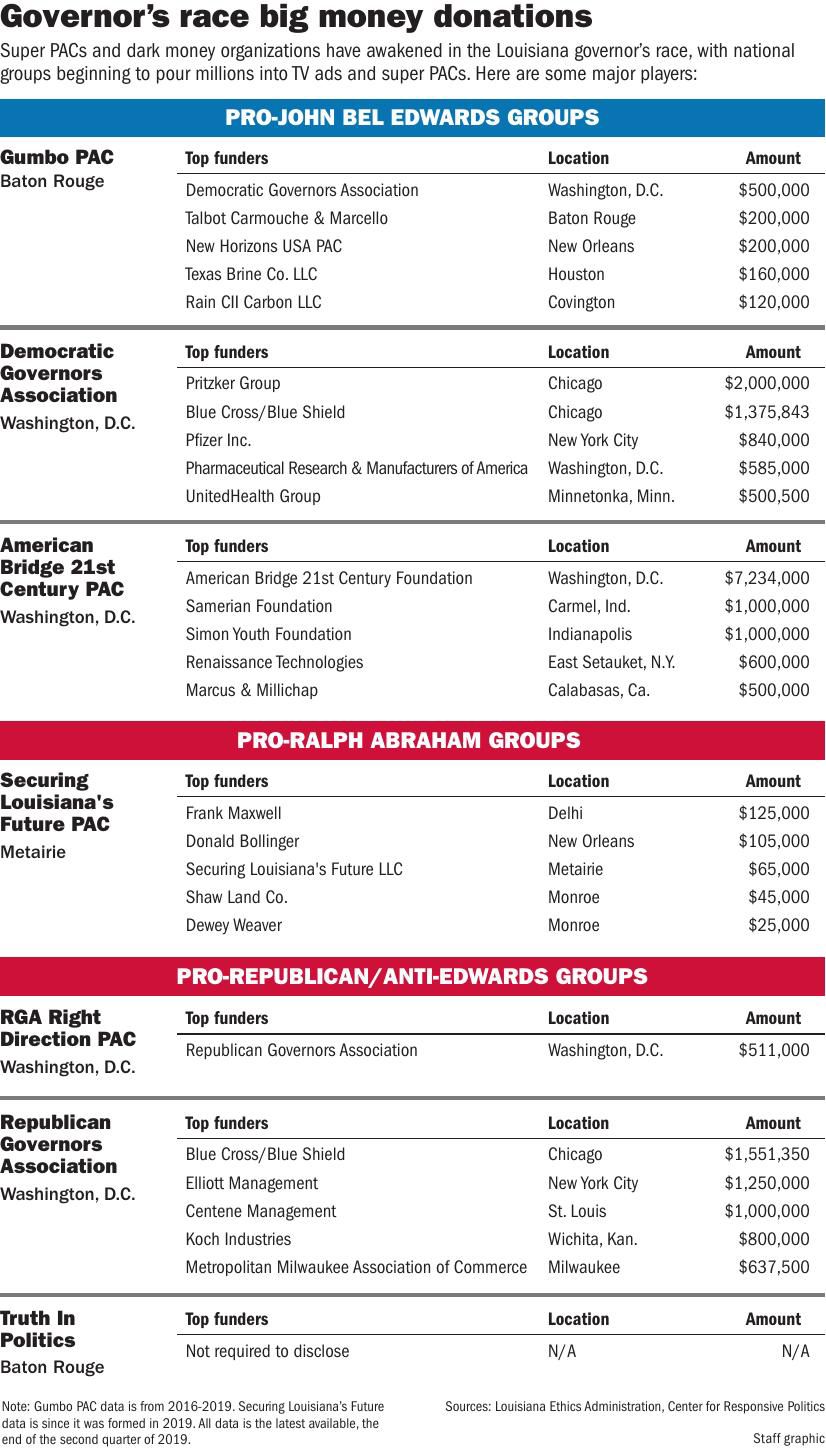