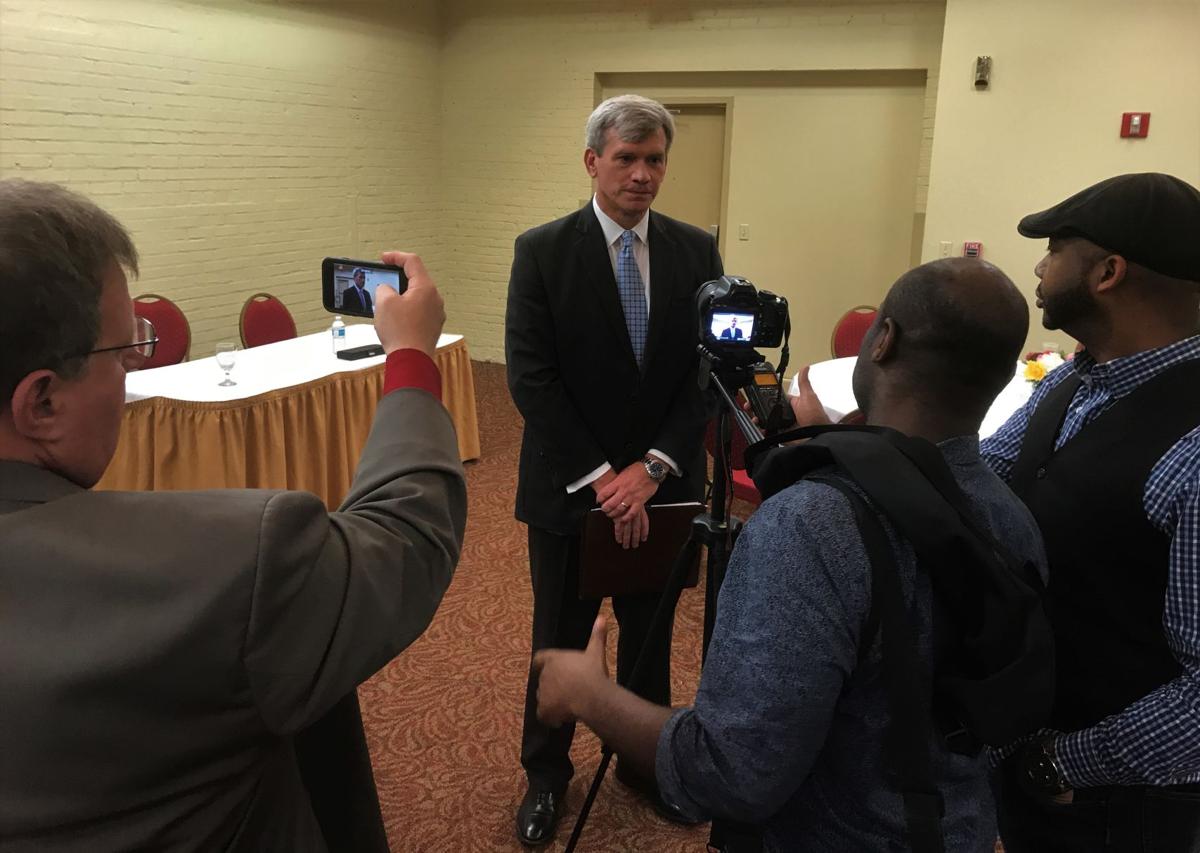 Republican Tim Temple, a Baton Rouge candidate for insurance commissioner, at the Press Club of Baton Rouge on Monday, Sept.16, 2019 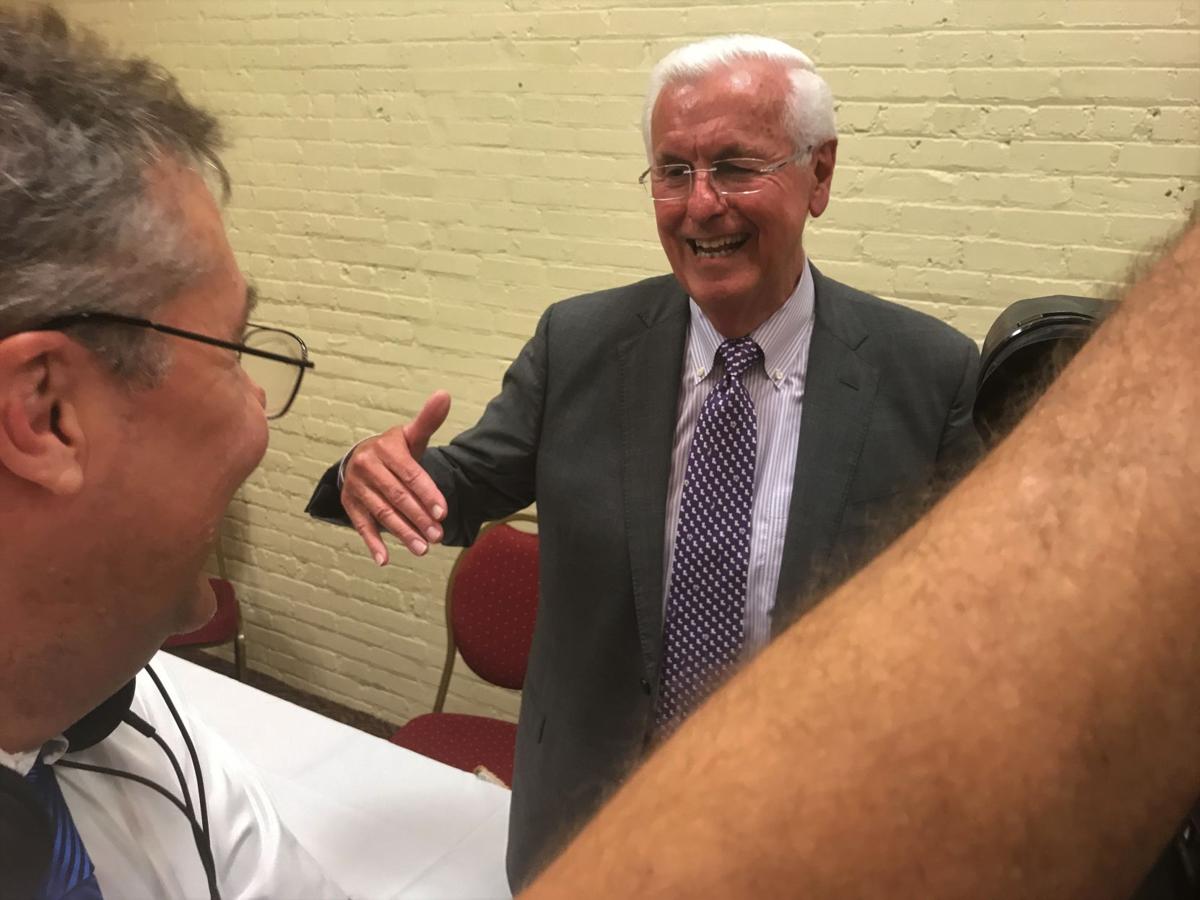 Republican Tim Temple, a Baton Rouge candidate for insurance commissioner, at the Press Club of Baton Rouge on Monday, Sept.16, 2019

Three-term Insurance Commissioner Jim Donelon is portrayed as a creepy clown on interstate billboards and sleeping on television ads.

The chief regulator overseeing what Louisiana residents pay for auto, homeowners and other insurance policies usually attracts little attention, even though those costs are about 18 percent of the typical household budget. In fact, a poll released Sunday night showed that more than half the state’s likely voters haven’t decided which candidate to back.

This time Donelon faces self-financed opponent Tim Temple, a fellow Republican who is spending about $1 million in what is the only real competitive campaign among the seven statewide races – with the exception of the governor’s contest. With only two candidates the outcome will be decided Oct. 12. Early voting begins 8:30 a.m. Saturday and continues until 6 p.m. the following Saturday, Oct. 5.

Though the rhetoric has been harsh, the two candidates agree on most issues.

Both want to limit the injured’s access to the courts and significantly reduce their chance of success should they get a hearing.

Both don’t want the sellers of insurance, which is required to drive or buy a house, to be regulated as utility companies are.

Both say competition is the answer to drive down Louisiana’s higher than average premium prices.

But what qualifies as competition is where the rub lies.

Donelon, who took over 13 years ago after the 2005 hurricanes sent insurance companies scurrying, says more companies are competing in the state than ever before and the results are the companies decreasing rates.

“Auto insurance rates have gone down for half of Louisiana’s policy holders, because State Farm, Farm Bureau, and Progressive have reduced their rates,” Donelon said.

State Farm, the state’s largest writer of auto insurance with a million policies, for instance, has lowered auto rates by 10.5 percent, primarily to win back the 100,000 or so former policyholders who went elsewhere, Donelon said. The cost of workers compensation policies, which employers have to buy to cover expenses from on-the-job injuries, have gone down 19 percent because 253 companies are competing for the business. Homeowners policies have only gone up by 1 percent for each of the past five years because 32 new companies have started doing business in Louisiana, he said.

Donelon blames lawyers and a legal system that he claims makes suing all too easy for the injured and that’s at the heart of Louisiana’s struggle with higher costing policies.

Temple, a second-generation career insurance man who is pretty much self-funding his challenge, dismisses the recently announced rate reductions, saying those three auto insurance companies are just trading around the same 100,000 policyholders.

“The commissioner shouldn’t be focused on driving rates up or down. The commissioner needs to be focused on bringing competition to the state of Louisiana; that’s what brings rates down,” Temple said. "Louisiana needs a commissioner who understands the marketplace, the distribution channels, and is dedicated to making insurance affordable again.”

One answer – and this really is a key difference between the candidates – is the regulation that limits insurance companies to a single rate increase per year.

Donelon would keep the rule thereby allowing insurers to apply each year for higher rates. Temple would eliminate that rule and allow insurers to, basically, determine their product’s prices at will.

Temple said insurance executives tell him that their companies would return to Louisiana if the state jettisoned the ratemaking limitations. “That gives them back the ability to manage their risk; to change their pricing as market conditions allow not when the commissioner says it’s alright,” Temple said. “My goal is to bring more companies, true competition to Louisiana and that is what they have identified as inhibiting them coming to the state.”

Donelon counters that any insurance company worth its salt can predict conditions for more than six months out and properly calculate how much they need to charge for the coming year. Most states in the southeast have a similar rule. It’s law in South Carolina.

“If he wants to introduce a bill allowing rate increases every six months he can do so as a private citizen, through any legislator in the House or Senate,” Donelon said, adding “I dare say it’s D.O.A. (dead on arrival.)”

The Washington, D.C. conservative research group opposes rate regulation, arguing that controls over premium prices “may hinder the speed with which new products are brought to market. … An open and free insurance market maximizes the effectiveness of competition and best serves consumers.”

The F grade awarded Louisiana by R Street was influenced by the lack of points because the insurance commissioner and his staff must approve rate increases prior to their being employed.

The group also knocked off five points because Louisiana is one 11 states in the nation that elect its insurance commissioner. They favor a gubernatorial appointment for a set term.

Louisiana has the second highest auto insurance rates in the country. The state scored poorly, third worst on the R Street analysis, for “market concentration,” meaning too few companies writing too many of the auto insurance policies, and “loss ratio,” meaning number of claims and amount insurers have to pay out for those claims.

Insurance is the largest financial services industry regulated on the state level.

Donelon is the seventh commissioner since the office was created in 1957. Insurance duties previously had been handled by the Secretary of State. Since 1971, the third, fourth and fifth commissioner ended up in prison, convicted on federal charges. The sixth, whose leaving in 2006 catapulted his assistant, Donelon, stepped down after being criticized for using $40,000 of state money to buy designer-edition pickup truck loaded with luxury options.

Under Donelon’s watch over the past 13 years, the office has been free of the type of corruption allegations that once seemed a regular part of the Insurance Department.

Donelon was on the Jefferson Parish Council from 1978 to 1980, and a member of the Louisiana House of Representatives from 1982 to 2001, during which time he commuted from Metairie to Baton Rouge with David Vitter during legislative sessions.He was chairman of the House Committee on Insurance and co-chairman of the Republican Legislative Delegation.

A rising conservative star, Donelon ran for lieutenant governor in 1979 but was defeated by Bobby Freeman. In 1998, he was the GOP candidate picked to challenge Democratic U.S. Sen John Breaux. In 2001, Donelon joined the staff of the Insurance Department.

Temple, who lives in Baton Rouge, is the president of Temptan LLC, a family-owned financial and real estate management company.

His family founded Gulf Universal Holdings, which included a firm that sold worker’s compensation policies and another entity that sells insurance. His Dad was the first chairman of the Louisiana Workers’ Compensation Corporation and Temple has been involved with several areas of insurance, including selling workers’ comp policies and later as a reinsurance broker.

“Louisiana has never had an Insurance Commissioner from the insurance industry. That’s my background,” Temple said.

A statewide survey of 550 people released Monday by Louisiana Association of Health Plans showed incumbent Donelon with 22 percent of the vote and challenger Templet with 20 percent. The margin of error for the poll conducted by John Couvillon was plus or minus 4.2%. Interestingly, Couvillon calculated that 58 percent of likely voters hadn’t made up their minds.

Another poll released earlier this month, this one conducted by pollster Bernie Pinsonat, found a similar percentage of undecideds. His poll has a margin of error of plus or minus 4%. Donelon polled 35% of the voter to Temple’s 20%.

“For Donelon is unique, because he hasn’t had a serious challenger in years and now he does,” Pinsonat told The Associated Press at the time.