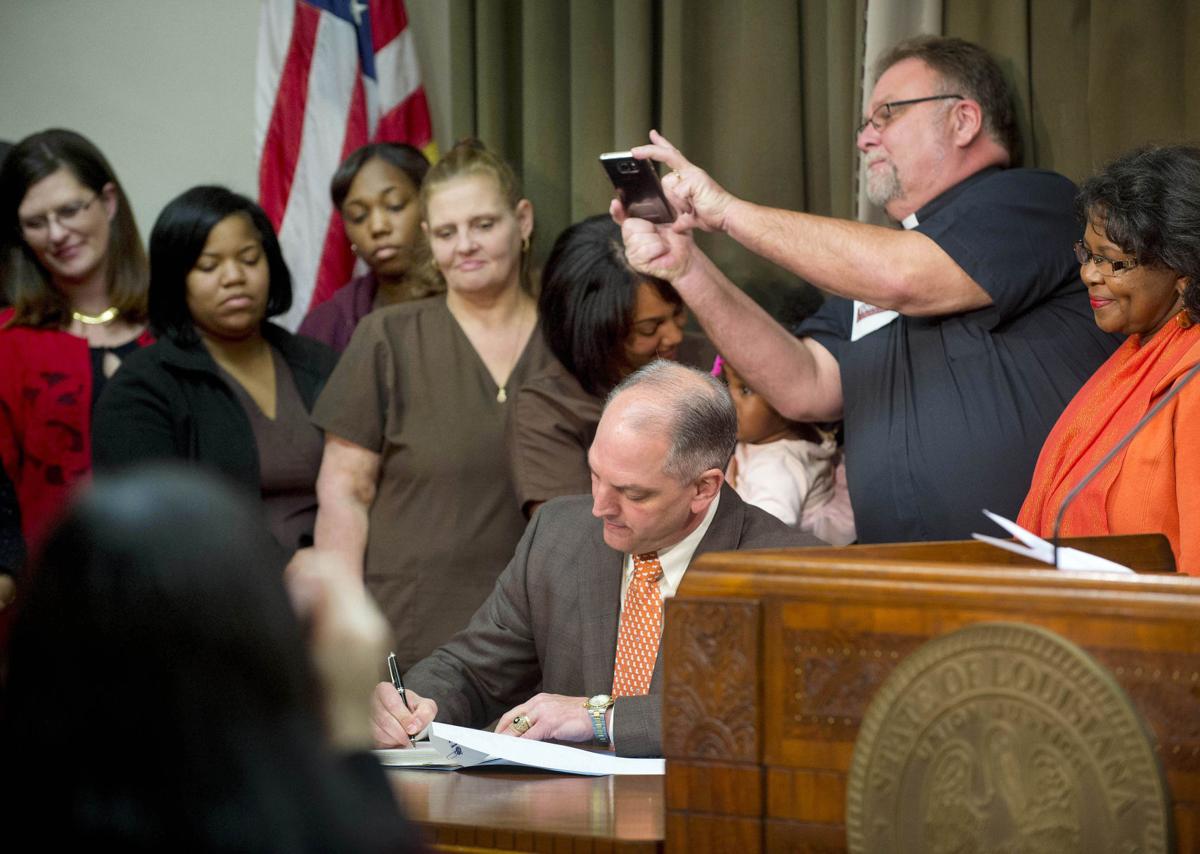 Advocate staff photo by TRAVIS SPRADLING – Gov. John Bel Edwards signs the first executive order of his new administration at the State Capitol, No. JBE 16-01, which provides for Medicaid expansion in the state of Louisiana. 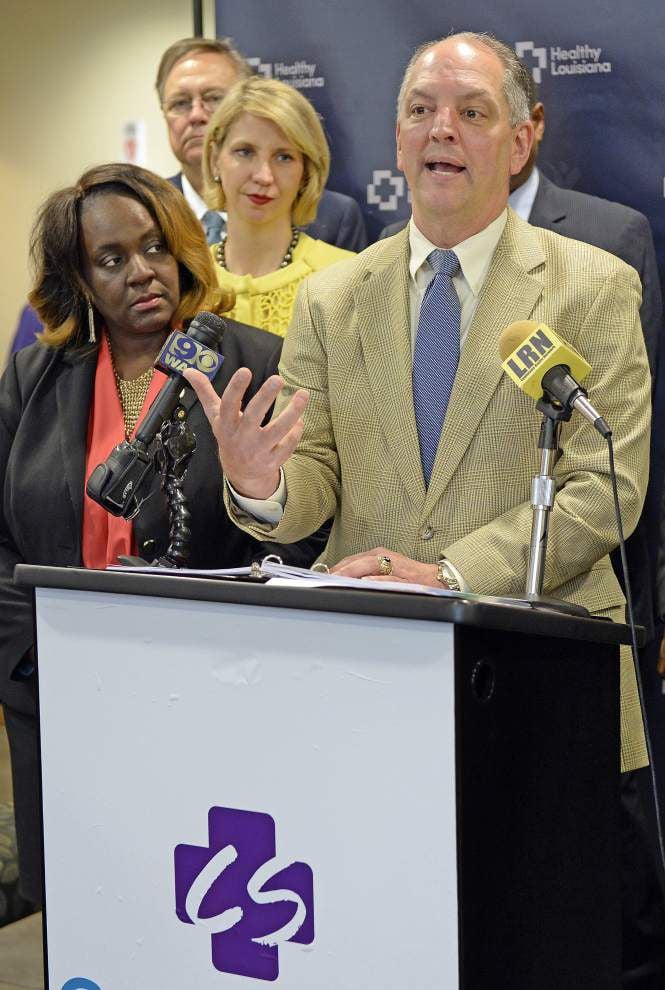 Advocate staff photo by TRAVIS SPRADLING – Gov. John Bel Edwards signs the first executive order of his new administration at the State Capitol, No. JBE 16-01, which provides for Medicaid expansion in the state of Louisiana.

The major Republican and Democratic candidates running for the U.S. Senate divide along party lines when asked whether they support Gov. John Bel Edwards’ decision to allow the working poor to qualify for Medicaid.

The four Republicans oppose the Democratic governor’s decision, while the two Democrats support it, according to a survey of the candidates by The Advocate.

The newspaper asked the question after Edwards’ Department of Health on Monday reported that 305,000 Louisiana residents have enrolled in Medicaid and are beginning to treatment for various maladies.

Over 100 patients, following a colonoscopy, underwent the removal of polyps, to eliminate a precursor to cancer. Treatment has begun for 160 adults who were diagnosed with diabetes, and 24 women are now getting treatment for breast cancer.

“It makes health care available to people,” said Foster Campbell, a Democrat from Bossier Parish who serves on the five-member Public Service Commission, which regulates utilities.

“It’s not a good decision,” Campbell said. “It’s a great decision. G-R-E-A-T. I thought the other side was heartless. They should be worried about people getting the medicine they need.”

Republicans in the House have voted about 60 times to roll back the Affordable Care Act. But Democrats in the Senate have blocked those efforts, and Obama has insisted he would veto anything that got through Congress.

U.S. Senate candidates split on Obamacare; one would 'rather drink weed killer' than support it

“Show me how the extra money we spend every year on Medicaid is making our people healthier,” Kennedy said. “You can’t do it.”

Kennedy opposes the Medicaid expansion. But now that it has been implemented, he said that state officials ought to make patients pay more through higher co-pays when they visit emergency rooms for nonemergency needs, as a way to encourage them to see primary care physicians.

“You now have 300,000 more people carrying a (Medicaid) card around,” said Fleming, a family practice physician before his 2008 election to the House representing northern Louisiana. “They’re getting the same care as before.”

Fleming said Medicaid patients face a fundamental problem. “Most doctors do not accept it for payment because payment is oftentimes lower than what they can operate their practices on,” he said.

Rob Maness, as he has done throughout the campaign, offered a full-throated cry against a Democratic program.

“The expansion is just a trap for the state,” said Maness, a retired Air Force colonel and Republican who finished a distant third in the 2014 Senate race. “It’s going to enable the federal government to grab more power at the expense of people.”

The Edwards administration has said the expansion will save the state nearly $200 million this fiscal year as the working poor seek treatment with doctors rather than make more costly emergency room visits.

Washington could alter its commitment if the president and Congress, which is currently in Republican hands, approve a lower federal matching rate.

Under the expansion, adults who make less than 138 percent of the federal poverty level — about $33,500 a year for a family of four or $16,200 for a single adult — can qualify for free health care coverage.

“Without reforms, it’s a bad decision,” said Boustany, who was a heart surgeon in Lafayette before his 2004 election to the House. “It will add more stress to the state budget. We’re going to be delivering the most expensive care. They’re not going to have access to a good patient-doctor relationship.”

Caroline Fayard, a New Orleans attorney, accepts the Edwards administration’s view that the Medicaid expansion will save the state money.

“Our money was already going out of state because of (Gov. Bobby) Jindal’s refusal to accept the (federal) dollars,” said Fayard, noting that Edwards’ decision is bringing millions of dollars from Washington to Louisiana.

Fayard also questioned why Fleming and Boustany would oppose the Medicaid expansion given their medical background.

“I find it ironic that there are physicians in this race who are so anti-health care, even though providing health insurance means people can be working,” she said. “It’s the right thing to do for people who are working every day and providing for their families. When you talk to a single mom working multiple jobs to feed her family, if her children are able to get coverage, that is what government is good for.”

Troy Hebert, a political independent who served in the state House and Senate before working in the Jindal administration, sides with the Republicans in believing that the Medicaid expansion ultimately will harm the state’s budget.

“In the long term, sooner or later the tab is going to come due, and taxpayers will foot the bill,” Hebert said.

Republican David Duke, of Mandeville, refused to be interviewed. His campaign released a statement saying Medicaid and Medicare “should encompass all who work for a living, full or part-time. The problem is that the illegal alien presence sucks enormous funds from the health care system financed by those who work or have worked.”

It was perhaps an odd place to find U.S. Senate candidate and conservative Republican Rob Maness campaigning for votes — front row of the LSU …

In a year when being a political outsider is touted as a badge of honor for many candidates seeking elected offices, Foster Campbell embraces …

Republican U.S. Senate contender John Fleming had been a family physician for years when he took up a new hobby.

Polls close at 8 p.m.: Your guide to what's on ballot, info on candidates, more

In the Nov. 8 general election, voters will choose a new president, a new senator from Louisiana, a new Baton Rouge mayor and much more.