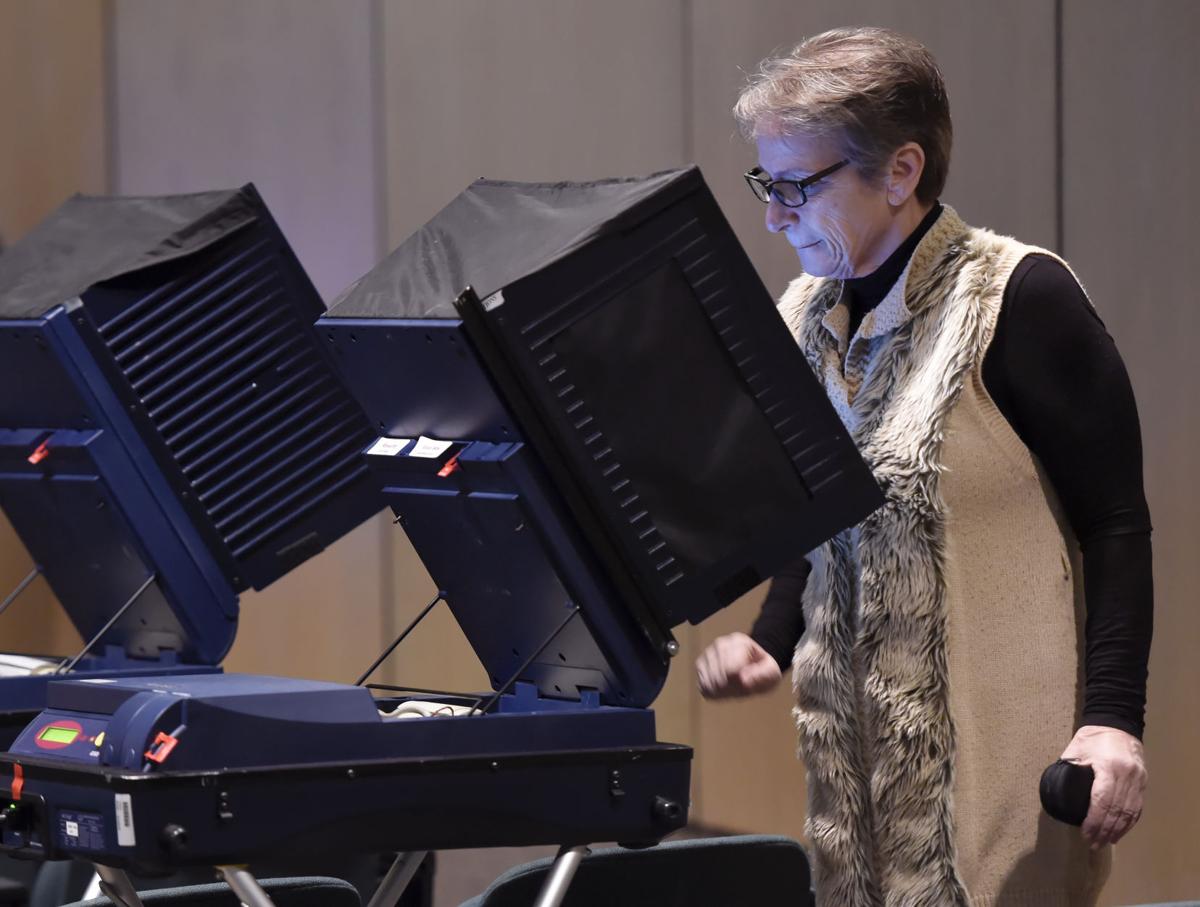 Making her decision, Elisabeta Pekmezi is bathed in the blue glow of the portable voting machine as people turn out for early voting at the Louisiana State Archives Building Monday Nov. 26, 2018, in Baton Rouge, La. 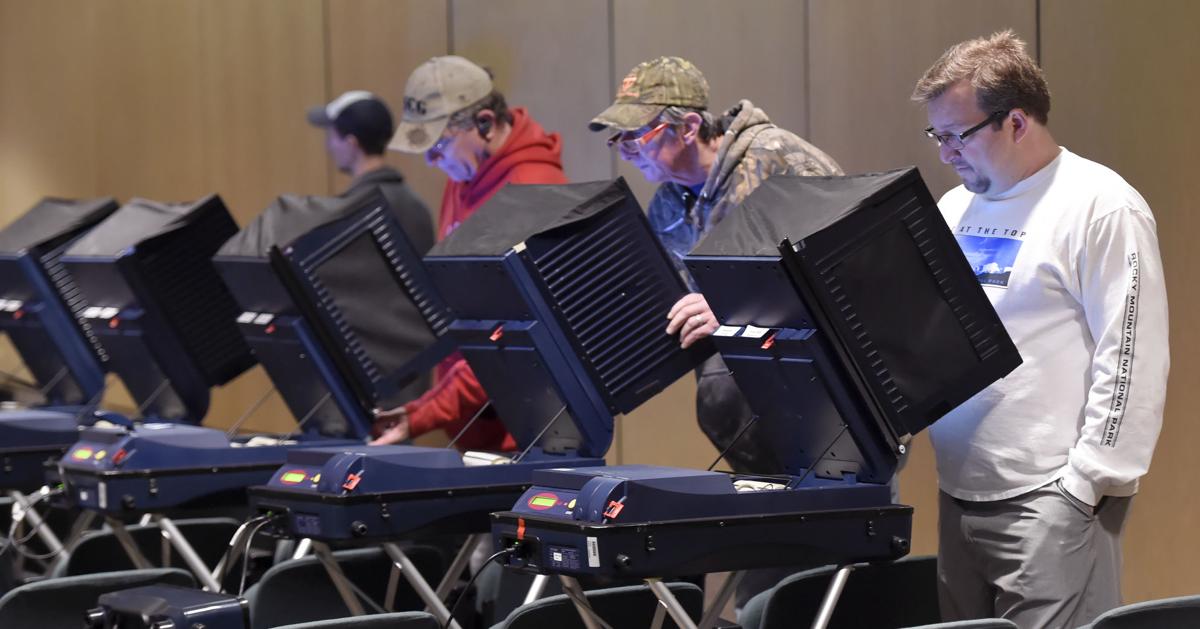 Bathed in the blue glow of the portable voting machines,voters cast ballots as people turn out for early voting at the Louisiana State Archives Building Monday Nov. 26, 2018, in Baton Rouge, La.

Making her decision, Elisabeta Pekmezi is bathed in the blue glow of the portable voting machine as people turn out for early voting at the Louisiana State Archives Building Monday Nov. 26, 2018, in Baton Rouge, La.

Bathed in the blue glow of the portable voting machines,voters cast ballots as people turn out for early voting at the Louisiana State Archives Building Monday Nov. 26, 2018, in Baton Rouge, La.

More people went in person to cast ballots on the first day than have since early voting began – with the exception of the 2016 presidential campaign.

The Secretary of State reported Sunday morning that 77,059 people voted Saturday on the first day of early voting. It’s the second highest first day in history – 87,066 voters participated in November 2016 presidential contest. But Saturday’s numbers are more than twice the 37,611 who early voted on the first day in 2015 gubernatorial race.

The first day is an early indicator of how enthusiastic voters are about the upcoming Oct. 12 election. And it gives campaigns a hint as to how their strategies are working.

Though the first day numbers were high, a closer look underscores a lack of fervor in this year’s gubernatorial contest, which could prove problematic for incumbent Gov. John Bel Edwards winning in the primary two weeks from now, said Baton Rouge pollster John Couvillon. Couvillon has been analyzing early voting for about a decade.

Edwards, the only Democratic governor in the Deep South and only member of his party elected statewide in Louisiana, faces five opponents to reelection for a second term. U.S. Rep. Ralph Abraham, of Alto, and Baton Rouge businessman Eddie Rispone, are the two top Republicans in the race.

If no one candidate wins more than 50 percent of the vote on Oct. 12, the top two vote-getters meet again in a Nov. 16 general election to decide.

“The first day tends to set the tone. It was an incredible turnout compared to 2015. But I’m not seeing the excitement of four years ago in this governor’s race,” Couvillon said, adding that he nevertheless was shocked by the lines at the State Archives early voting location.

Looking deeper into the statistics shows a decrease in the components of vote that could keep the incumbent from winning the election outright on primary day.

Recent polls have showed Edwards a few points shy of winning outright in two weeks, largely because his campaign has operated flawlessly. “You could presume that part of that was a get-out-the-vote-early operation. You figure they did everything they could and if the best they could do on their first day was 4% less on Democratic side, that translates into problems for Gov. Edwards,” Couvillon said Sunday.

Stephen Handwerk, executive director of the Louisiana Democratic Party, disagreed: “We are so excited that we made some serious strides forward yesterday with breaking previous gubernatorial first day Early Vote. We expect to see robust turn out continue. Voters need to know that this is going to be a higher than expected turn out,” Handwerk texted Sunday in response to questions by The Advocate.

Abraham’s campaign manager, John Vick, also saw optimism in Saturday’s numbers as they applied to the parts of the state where Abraham needs large turnouts to prevail.

Edwards needs a healthy turnout in New Orleans, Baton Rouge and Shreveport to win. He’ll need an overwhelming number of African-American votes and the support of at least 30 percent of the whites voting.

Both New Orleans and Baton Rouge had dramatically more people voting on the first day of early voting. But that doesn’t necessarily portend well for Edwards.

First day voting in East Baton Rouge Parish, which Edwards won in 2015, was 244% higher Saturday than in 2015. But the precincts of what could become the new city of St. George were up by 726 percent. Those precincts, which are voting on whether to breakaway from the parish to incorporate a new city, backed Republican President Donald Trump with about 80 percent of the vote in 2016.

“St. George may not be enough to flip East Baton Rouge, but if those numbers sustain in the most Republican part of the parish, his support will be diluted,” Couvillon said.

The other part of the equation is that Republicans in 2015, candidates as well as some elected officials, actively opposed front-runner U.S. Sen. David Vitter, who spent much of the race with more money and name recognition than all the other candidates combined.

Revelations about the details of the Republican's admitted indiscretions was part of the reason, but a history of hardball politics led many of his GOP colleagues to turn against his candidacy.

Republicans are not as fractured this time around.

Eric Trump blamed Edwards for what he called a "decimated" Louisiana economy.

Traditional mathematics applied to the first day calculate out to a 60 percent turnout on Oct. 12. Pollster Couvillon, however, thinks the turnout will be more like 40 percent – similar to 2015 – partly because more voters are comfortable with early voting and partly because absentee ballots, since 2017, are being included in the count.

Couvillon expects about 60,000 more voters will participate in this election, but the overall percentage of participation by the state’s 2.9 million registered voters will remain about the same. He expects 1.19 million votes will be cast as opposed to 1.13 million in 2015.

Early voting opens Saturday for the Oct. 12 general election primary. Ballots can be cast at any of five locations in East Baton Rouge Parish …