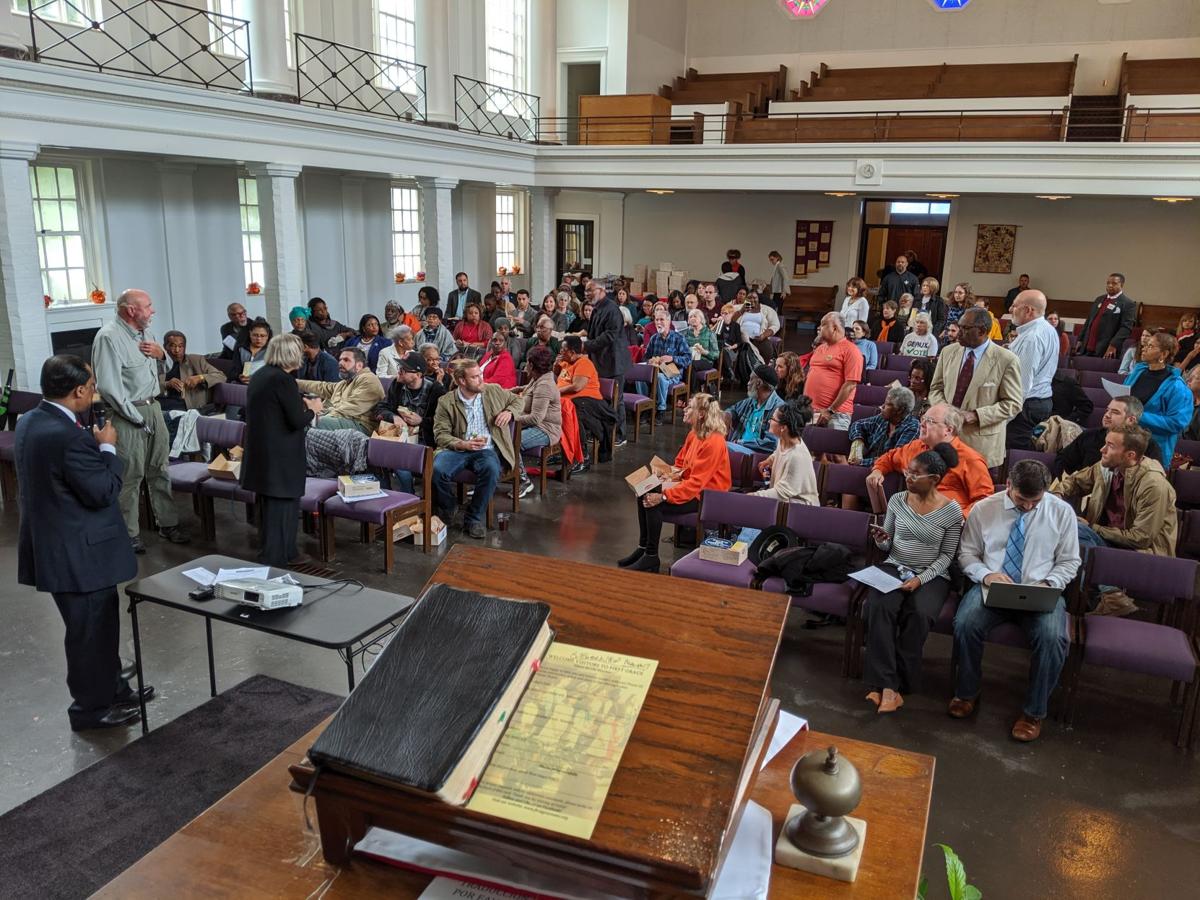 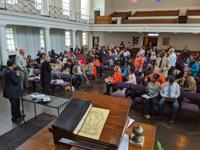 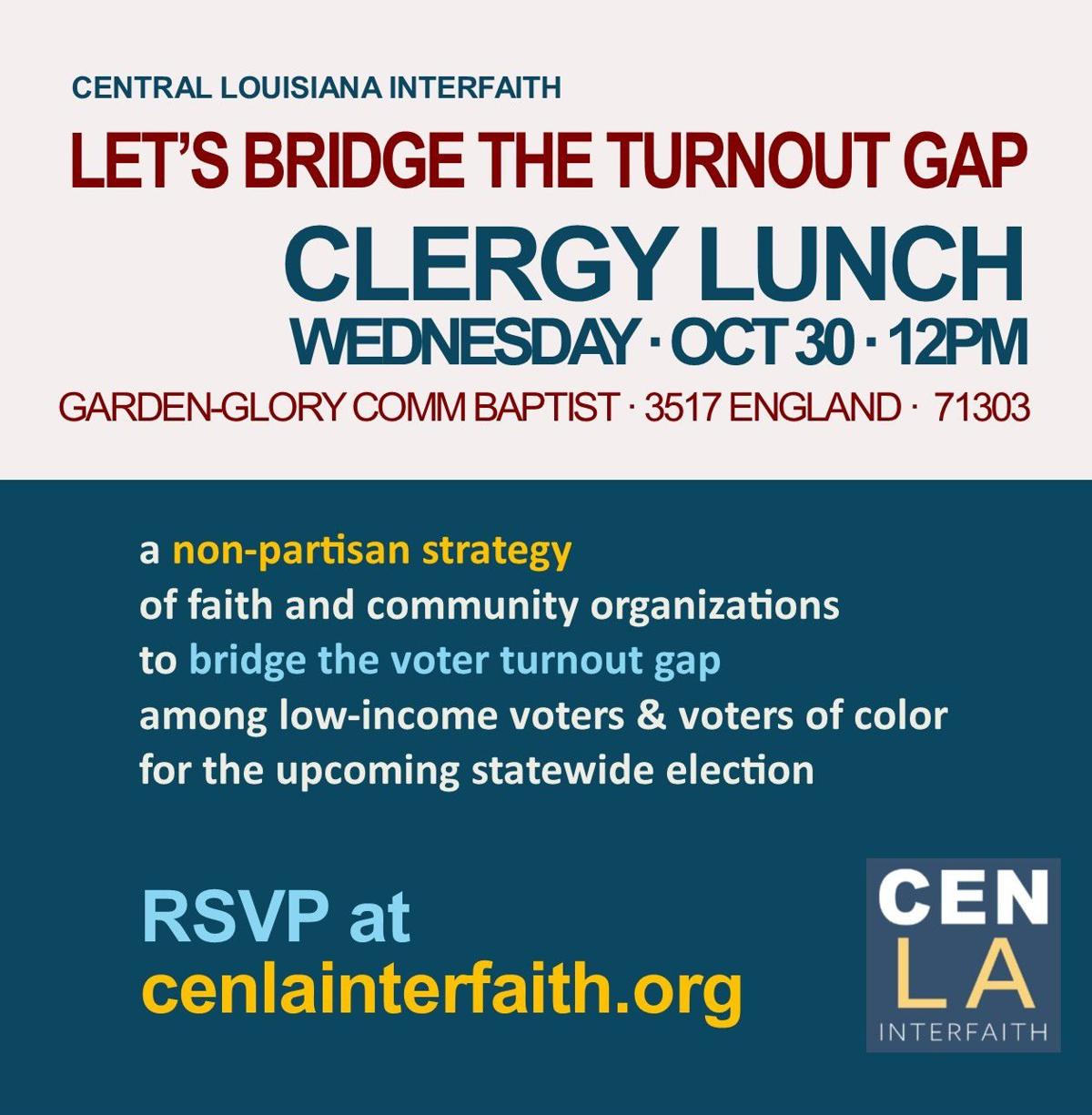 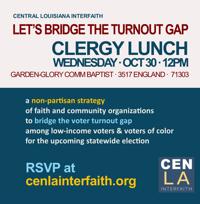 Ministers from around the state met and organized get-out-the-vote initiatives for the runoff election. This leaflet advertised a clergy organizational luncheon in Alexandria. 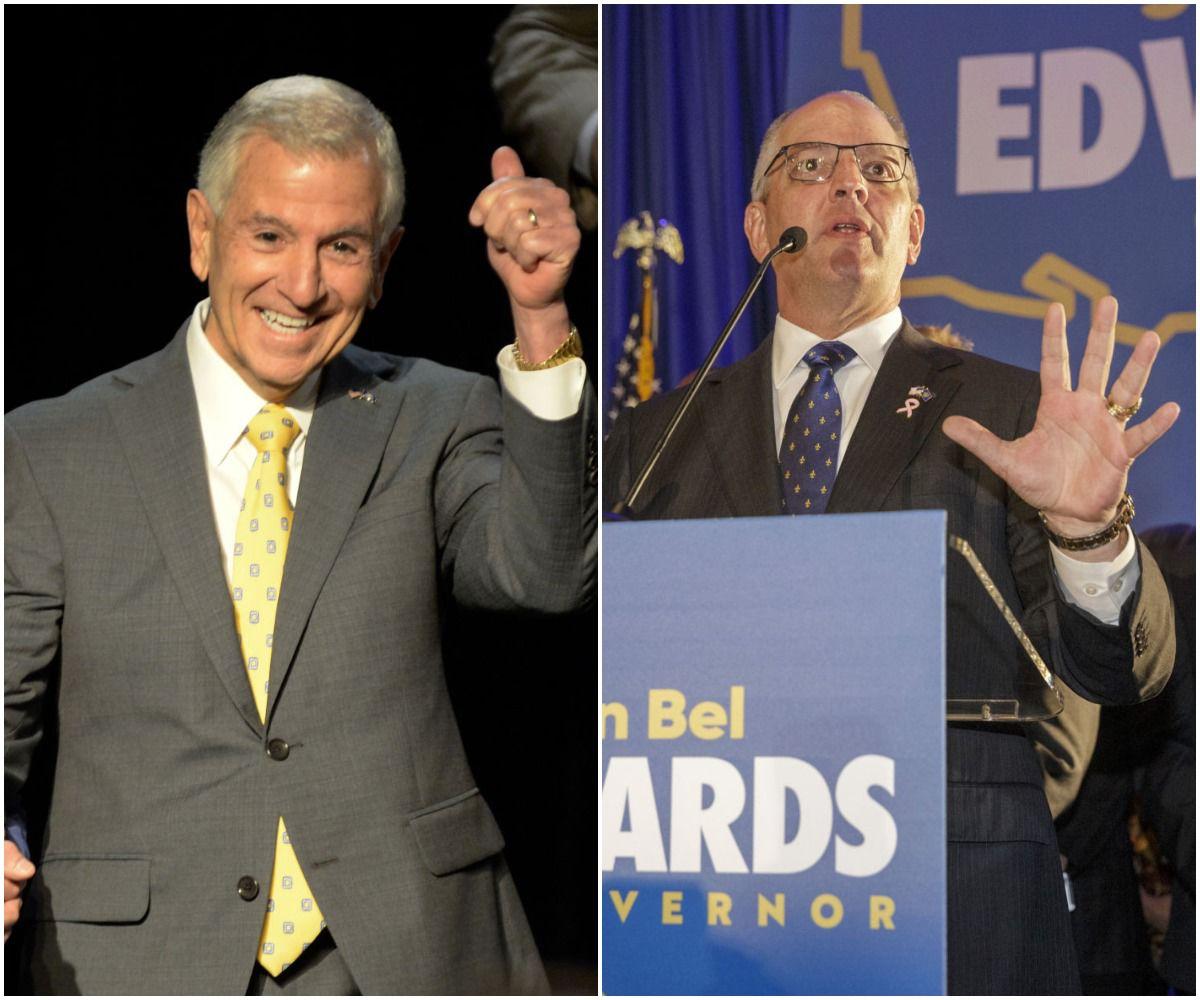 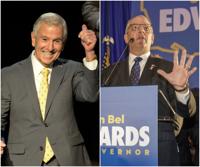 Ministers from around the state met and organized get-out-the-vote initiatives for the runoff election. This leaflet advertised a clergy organizational luncheon in Alexandria.

After a fairly lackluster campaign for governor, in which even the media took scant notice, voters flocked to the polls Saturday in record numbers on the first day they could cast their ballots for the Nov. 16 runoff election.

The Secretary of State’s Office counted 89,623 early votes – the highest first day early voting turnout ever, about 2,500 votes more even than the benchmark 2016 presidential election. Faith-based groups around the state may have contributed to the increase.

“It’s up 16 percent, and that is a good indication that people are more engaged in this runoff,” pollster Edward Chervenak, of Edgewater Research in New Orleans, told The Advocate Sunday. “We’re seeing a lot more enthusiasm by African Americans.”

The numbers of early voters increased dramatically in some locales: up 87% in New Orleans, 57% in Baton Rouge, doubling in Shreveport and up 77% in Alexandria – all areas in which incumbent Gov. John Bel Edwards did well during primary voting and needs to do better in the runoff to offset rival Eddie Rispone’s Republicans who have been energized by President Donald Trump and a national GOP intent on denying a second term to the Deep South’s only Democratic governor.

John Couvillon, a Baton Rouge pollster with JMC Analytics & Polling and who has studied early voting trends for years, said the first returns show higher turnout for whites and Republicans, but the most dramatic jump was among black voters and Democrats.

Nov. 16 election: Here's what's on the ballot in Acadiana

Democratic Gov. John Bel Edwards and his Republican rival, Eddie Rispone, are neck and neck in the governor’s race that tops the ballot.

“The ‘missing ingredient’ in the primary was lower black enthusiasm, which clearly has changed and that change has – for now – provided an electoral lift for Democratic Gov. John Bel Edwards,” Couvillon wrote in his analysis.

Edwards came up about 40,000 votes shy of winning the Oct. 12 primary outright. Since then, however, Rispone, a multi-millionaire who largely self-funded his first bid for public office, has surged. As of last week, two different polls showed both candidates are so close that they are within the margin of error for winning.

Of course, it's just the first day of early voting. The numbers could change dramatically during the week of early voting and again on Nov. 16 when all the polls are open. Early voting takes place 8:30 a.m. to 6 p.m. Monday through Saturday at Voter Registrars' offices around that state as well as at specific locations in the more populous parishes.

Concerned about the Oct. 12 primary’s low turnout – particularly among lower income people and minorities – a group of churches in various cities initiated their own get-out-the-vote programs.

The Rev. Shawn Moses Anglim, pastor of the First Grace Methodist Church in mid-city New Orleans, said throughout the campaign candidates had avoided being specific and shied from media coverage, which contributed to the lower turnout.

WASHINGTON — President Donald Trump will hold a rally in Monroe on Wednesday in support of GOP gubernatorial candidate Eddie Rispone, who is h…

“They (the candidates) have been plodding around, trying not to offend anybody in their base,” Anglim said Sunday.

The result was that the majority of voters abstained from casting ballots in the primary, in which 46% of the state’s 2.9 million registered voters participated. Turnout for low income and minority voters was about 17% lower than in the 2016 presidential election. When he and other ministers saw the statistics, they were concerned that such a large group of voters had abstained from picking legislative and gubernatorial leaders for the next four years.

With the Rev. Chris S. Gordon, pastor of New Zion Baptist Church in New Orleans, as well as members and pastors from Touro Synagogue, Sixth Baptist Church, St. Charles Avenue Baptist Church, and other faith-based organizations, they convened a meeting last week to decide what to do.

Rispone's constitutional convention idea a thorny issue, and homestead exemption is one reason why

Eddie Rispone has offered few details about his No. 1 policy priority if elected governor: a convention to rewrite the Louisiana Constitution …

Anglim said he expected about 75 people to attend the meeting but upwards of 200 packed his New Orleans church.

With help of Together Louisiana, the ministers put together envelopes to give volunteers that held the names of about 30 voters who cast ballots in the 2016 presidential election but didn’t participate in last month’s primary. The volunteers were charged with reaching out personally to each of those voters and asking them to participate.

The Edwards and Rispone campaigns were not consulted and really, Anglim said, the ministers were not really concerned with how they voted, just that they did.

With a ballot topped by a governor's race that is just now getting feisty, a week of early voting begins 8:30 a.m. Saturday.

Republicans also showed up in record numbers on Saturday.

The winner take-all runoff in on Saturday, Nov. 16. Early voting is taking the day off and resumes Monday through Saturday this week.