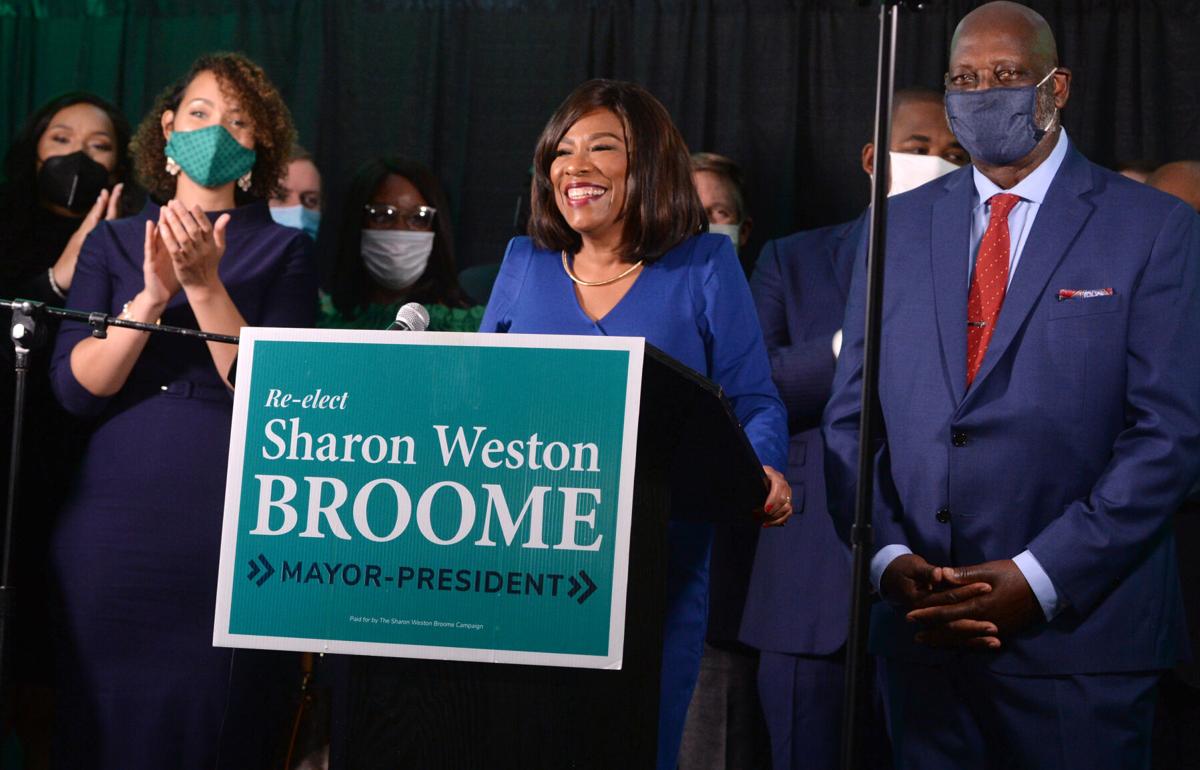 Reelected Mayor Sharon Weston Broome, surrounded by family and staff, speaks to the at her election night party Saturday at Embassy Suites. 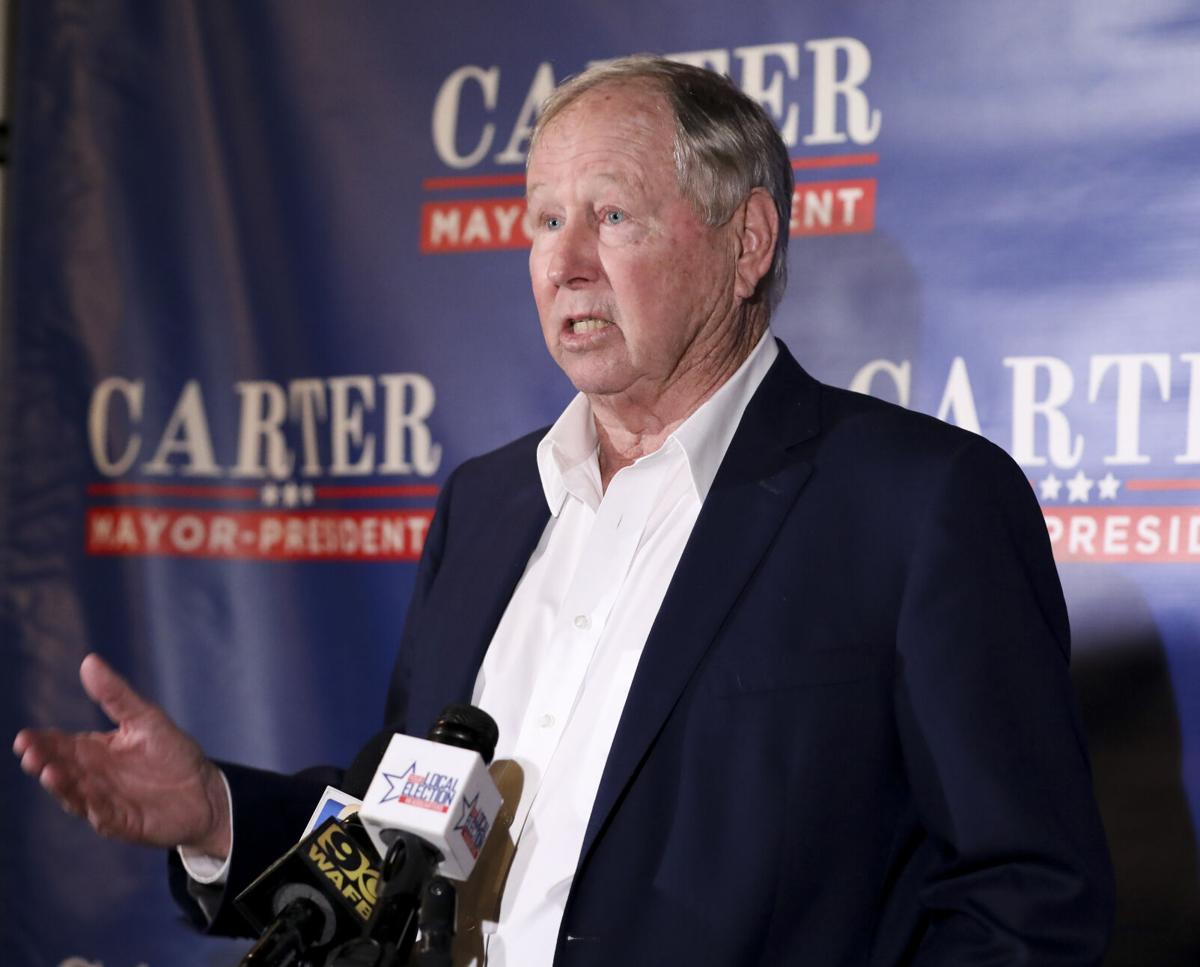 Reelected Mayor Sharon Weston Broome, surrounded by family and staff, speaks to the at her election night party Saturday at Embassy Suites.

Broome had 57% of the vote in complete but unofficial returns, after finishing with 48% of the vote Nov. 3. Carter grew his percentage of the vote from 20% to 43% Saturday.

In a speech Saturday night to supporters, Broome expressed a desire to bridge the gaps between opponents' beliefs and hers.

"If you chose someone else as your option, we'll still work for you and hopefully earn your respect and support in the future," she said.

Carter conceded around 9:45 p.m. Saturday during a phone call with Broome, in which he congratulated her on running a great campaign. He quipped that he wants to see traffic light synchronization finally become a reality during her second term, calling back to a point he needled her on several times during the campaign.

"Well, obviously you read the headline in the paper today. We have the highest murder rate in the history of the city," Carter said in an interview later. "I’m very concerned about that for the safety of the citizens of our parish and hopefully we can turn that around. I don’t want to be negative about our city. I want to be positive about our city because I love our city."

"I wish her the very best of luck," he added.

"You were able to accomplish a great deal in your first term (and) I appreciate all your hard work," said Edwards, who endorsed her reelection campaign early on. "The people of Baton Rouge made the right decision."

Broome had to ward off a crowded field of opponents in her road to a second term as the city-parish's first Black female mayor. She drew seven challengers, including Carter and two from the Metro Council.

Broome cast herself as a transformative leader who effectively led the city-parish in the trying times it faced during the aftermath of the social unrest after the police killing of Alton Sterling and the 2016 historic flood that swamped much of the Baton Rouge metro area.

During the final year of her tenure, Broome was confronted with the coronavirus and the shockwaves the pandemic has sent through the local business community.

Broome's administration responded to the economic fallout by implementing her Keep BR Serving initiative, a fundraising mechanism to cover the lost tips and wages suffered by the hospitality industry during the pandemic, and launching a $1 million microgrant program that was available to locally owned small businesses that were adversely affected.

But Broome was criticized for being too timid and even called an ineffective leader by some of her opponents, with many of them pointing to the city's spiking homicide rate and substandard infrastructure as hot-button issues in their attempts to unseat her.

In the days leading up to Saturday's runoff, Carter ran an ad saying Broome has "failed the leadership" test.

In turn, Carter tried to position himself as a "common sense" leader who would focus on crime prevention and job creation. He attempted to appeal to the parish's more hard-leaning conservatives by criticizing the "defund the police" movement and touting his military's background and support of President Donald Trump.

Carter's campaign was initially shunned by the some of the state's GOP heavy hitters like contractor and mega-donor Lane Grigsby. But once the field of candidates narrowed to just Broome and Carter, he gained endorsements and money from the likes of Grigsby, Broome's previous opponent, Bodi White, and last year's GOP gubernatorial candidate, Eddie Rispone.

"I’ve run campaigns and we’ve made mistakes, I don’t see where we did anything wrong," Carter told his team Saturday night. "We did every conceivable thing we could do."

The Broome/Carter showdown is one most political pundits predicted when the former legislator made his unexpected entry into the mayoral race back in July. Carter was viewed as a threat to Broome's White moderate supporters, who resided in Carter's old legislative district and proved critical in Broome's success in winning her first term.

However, pundits also expressed confidence that Broome would get reelected despite Carter's strong political résumé and community ties.

She was able to tout multiple large-scale projects she help spearhead in her first term aimed at address the city-parish's drainage issues and her $1 billion MovEBR roads improvement plan, which was arguably the first big win she got after a rocky start to her first few years as mayor-president.

In her second term, Broome has promised pay raises to the city's police, fire and first responders, which are up for approval this week by the Metro Council as it considers her 2021 budget proposal.

She's also claimed residents will start feeling traffic relief as a handful of her roads projects gets underway and work begins on the more than $200 enhancement work on five of the parish's major tributaries, and engineering and other preliminary work kicks off on the city-parish's long-gestating stormwater master plan.

Broome highlighted those accomplishments in her speech last night as she looked ahead to her future as the city-parish's leader.

"The work we've done these last four years will set the stage for a stronger, safer, more prosperous Baton Rouge," she said. "I'm going to honor the trust you've placed in me (because) we have so much left to do."