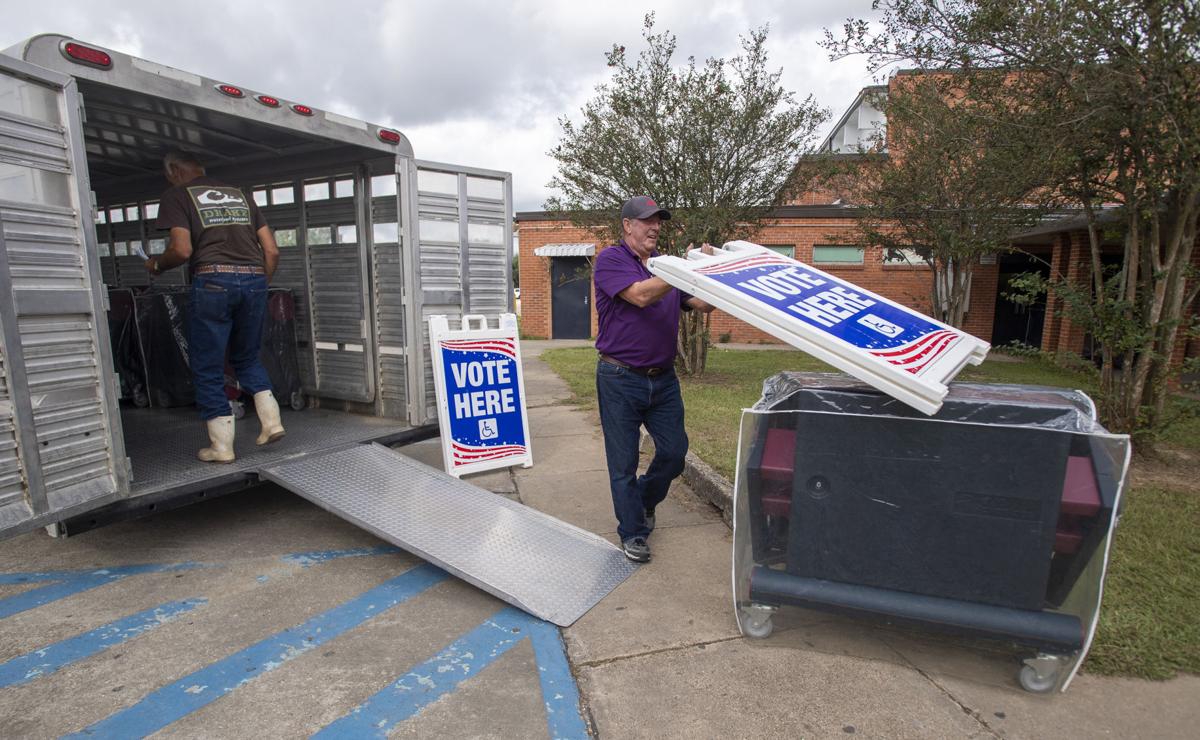 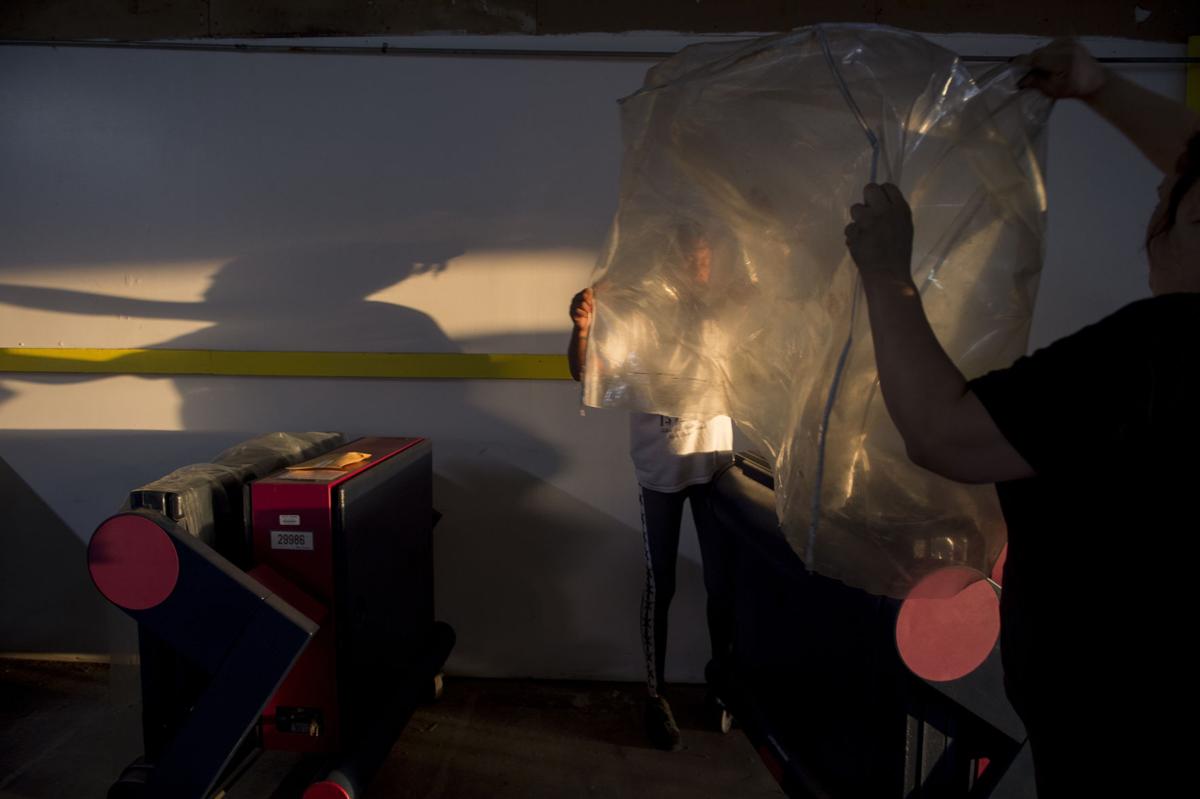 Early morning light sneaks into a warehouse where Tracey Augustin, center, and Gina Donohue, right, help move about 800 machines from a warehouse in New Orleans East on Friday, October 11, 2019. Saturday is Election Day in Louisiana. 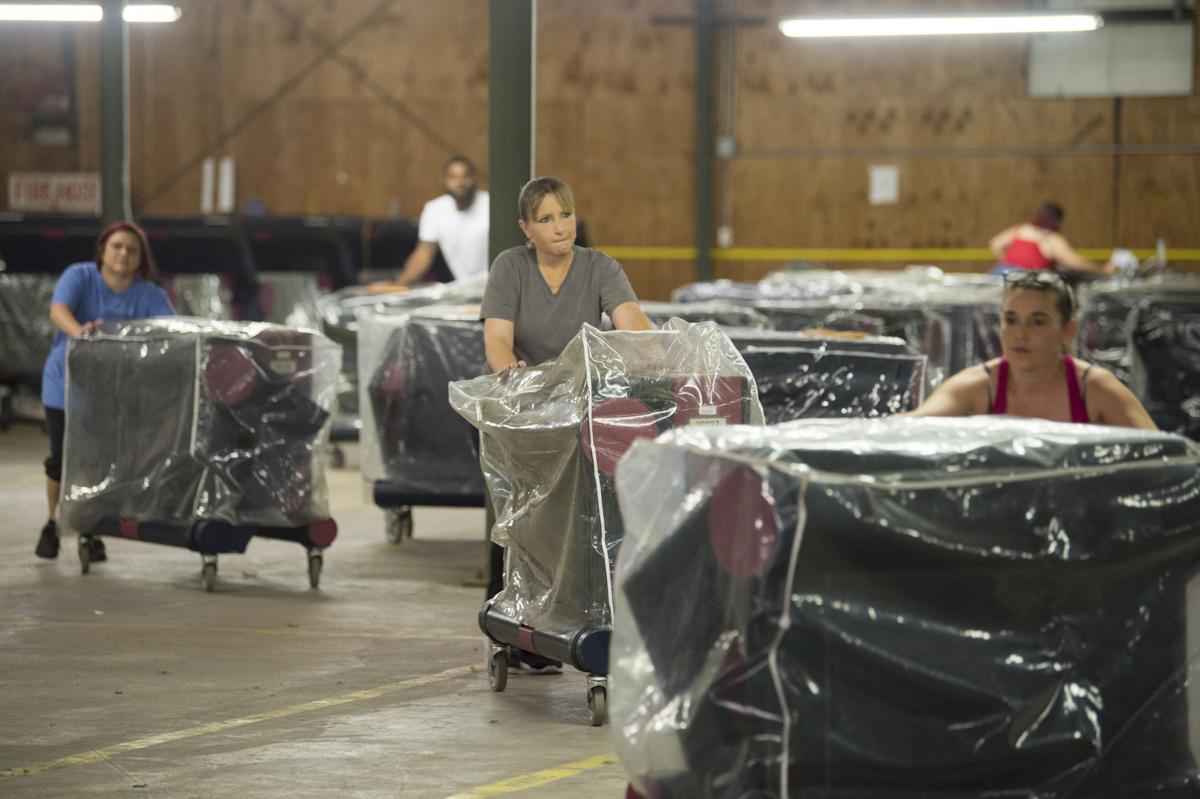 Crews moved nearly 800 voting machines from a warehouse in New Orleans East on Friday, October 11, 2019 as they prepare for Election Day on Saturday.

Early morning light sneaks into a warehouse where Tracey Augustin, center, and Gina Donohue, right, help move about 800 machines from a warehouse in New Orleans East on Friday, October 11, 2019. Saturday is Election Day in Louisiana.

Crews moved nearly 800 voting machines from a warehouse in New Orleans East on Friday, October 11, 2019 as they prepare for Election Day on Saturday.

Gov. John Bel Edwards, businessman Eddie Rispone and U.S. Rep. Ralph Abraham are making last-minute appeals for votes today as voters go to the polls in the primary to elect their next governor.

Edwards, 53, will be waving signs with supporters at two locations in New Orleans in the morning followed by lunch at the same restaurant where he ate on the day of his election four years ago followed by more sign waving in Baton Rouge. His election night party will be at the Renaissance Hotel in the capital.

Rispone, 70, is meeting with campaign volunteers at his office in the morning and will attend church in the afternoon. His election night party will be at L'Auberge Casino and Hotel in Baton Rouge.

Abraham, 65, is voting in his hometown of Alto, then will spend time with his grandchildren and will be at the University of Louisiana-Monroe tonight.

Edwards appears to have a roughly even-odds chance of winning the primary outright by notching at least 50% of the vote and continue as the only Democratic governor in the Deep South. Rispone and Abraham, both Republicans, are battling for second place and a spot in a Nov. 16 runoff that will occur only if Edwards can’t clear the magic mark.

The three men and three minor candidates for governor are among the 1,759 candidates on ballots across the state. They are running for everything from governor and six other statewide elected offices to the 92 undecided seats in the Legislature (the other 52 were decided when only a single candidate qualified). The election also includes all seven seats on the Board of Elementary and Secondary Education and a host of municipal and parochial contests, such as the mayor of Ridgecrest in rural Concordia Parish (population 694 in 2010).

Voters throughout the state also will pass or reject four constitutional amendments; each one would have a limited impact if approved.

Voters in metro New Orleans will choose from among four Republicans to fill an open seat on the seven-member Louisiana Supreme Court.

In all, 665 candidate races will be decided Saturday or will be forced into the Nov. 16 runoff.

The Secretary of State’s office is projecting a turnout of 45-46% on Saturday, up significantly from the 2015 primary, when turnout was 39.2%.

Because 384,013 people voted early, a 45% turnout would mean 948,800 people voting in person on Saturday, or 71.2% of the overall turnout, said Tyler Brey, a spokesman for the Secretary of State’s office.

President Donald Trump introduced a potential wild card into the race Friday night with an 11th-hour speech in Lake Charles. Trump rallied Republican voters to turn out and offered a vigorous defense of himself at a time when Democrats in the U.S. House are moving to impeach him. The president brought Abraham and Rispone onto the stage but did not single out either one for support.

The Democratic formula for victory in a statewide race in Louisiana typically calls for the candidate to win at least 33% of the white vote, at least 90% of the black vote and for black voters to account for at least 30% of the overall turnout.

Pollster Verne Kennedy, whose Florida-based Marketing Research Insight firm has been surveying Louisiana voters for more than 40 years, had welcome news for the governor on Friday.

Tracking 600 voters over the previous three nights, Kennedy found that Edwards had 52% after redistributing undecided black voters to assume that 90% of black voters overall will pick the Democratic candidate. Rispone had 22% of the overall vote, Abraham 17%. The remaining 8%, all of them white, were undecided.

Kennedy’s poll, which had a margin of error of 3.9%, showed Edwards winning among white voters, where he had 38% compared to Rispone’s 28% and Abraham’s 21%. Kennedy assumed that black voters will account for 27% of the overall turnout. Edwards was winning about 25% of the Republican vote.

If Edwards falls short of 50%, it will be because Kennedy’s poll under-sampled whites in rural areas, under-counted votes for the three minor gubernatorial candidates – other polls have shown them receiving 3-4% – or over-estimated the black turnout.

The primary ends a gubernatorial primary in which poll numbers have remained surprisingly stable. Edwards has hovered around 50% throughout the campaign.

Rispone’s attacks prompted howls of protest from the Republican political establishment and led several prominent Republicans to endorse Abraham. But by self-funding his campaign with more than $11 million, Rispone has spent about five times as much as Abraham and drowned out the congressman’s message.

Throughout the campaign, Edwards has emphasized how he worked with the Republican-controlled Legislature to turn the state budget deficit into a surplus -- a message aimed at Republicans and independents -- reduced sentences for some non-violent offenders.

Edwards has also appealed to conservatives by noting his background as a West Point graduate who served as a captain in the Army, is comfortable with guns and signed into law a strict anti-abortion bill.

He has touted this year’s teacher pay raise and more aid for early childhood education and for the state’s public colleges and universities.

He has appealed to liberals by noting that he expanded Medicaid to 450,000 working poor people – a decision that neither Abraham nor Rispone has said he would repeal.

Abraham has followed an orthodox Republican approach of pledging to cut taxes and to eliminate “waste, fraud and abuse.” The tax cut, he has said, would more than pay for itself by unleashing a wave of business investment. Abraham also has promised to upgrade roads and bridges – the state has a $14 billion infrastructure backlog – but hasn’t explained how he would pay for it.

In a stop in Metairie on Friday before 25 supporters, Rispone hit the high notes of his campaign talking points, emphasizing his background as a business owner who has never sought public office before.

“I can do for Louisiana what the president has done for the country,” he said, predicting that he would win a spot in the runoff and then defeat Edwards. “We’re going to send home this liberal, tax-and-spend career politician who happens to be a trial lawyer, and we’re going to have someone who is an outsider.”

Republicans are expected to continue their gains in the state House, where they currently have 61 of the 105 seats. Republicans might pick up a seat in Senate where they hold 25 of the 39 seats.

Medium Buying, an Ohio-based firm that tracks media spending, said the three candidates and outside groups – including the pro-Edwards Gumbo PAC and the anti-Edwards Republican Governors Association and Truth in Politics – have spent at least $30 million on the race.

Anyone who has difficulty voting should speak with a poll worker or the polling commissioner at the voting site, said Brey, the Secretary of State spokesman. Anyone wanting more assistance can call the office at (225) 922-2880.

Will Sentell of the Capital News Bureau contributed to this article.

Gov. John Bel Edwards is getting a last-minute boost to his get-out-the-vote efforts from former President Barack Obama, who recorded a robo-c…