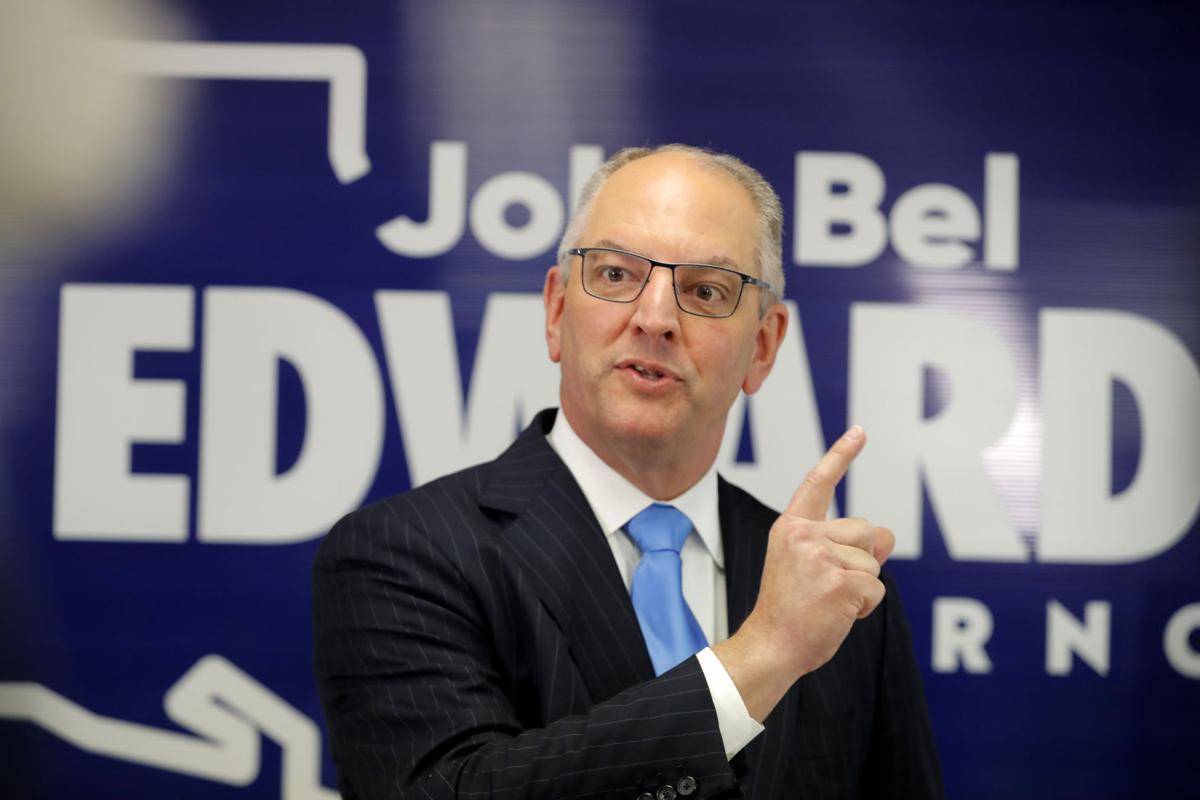 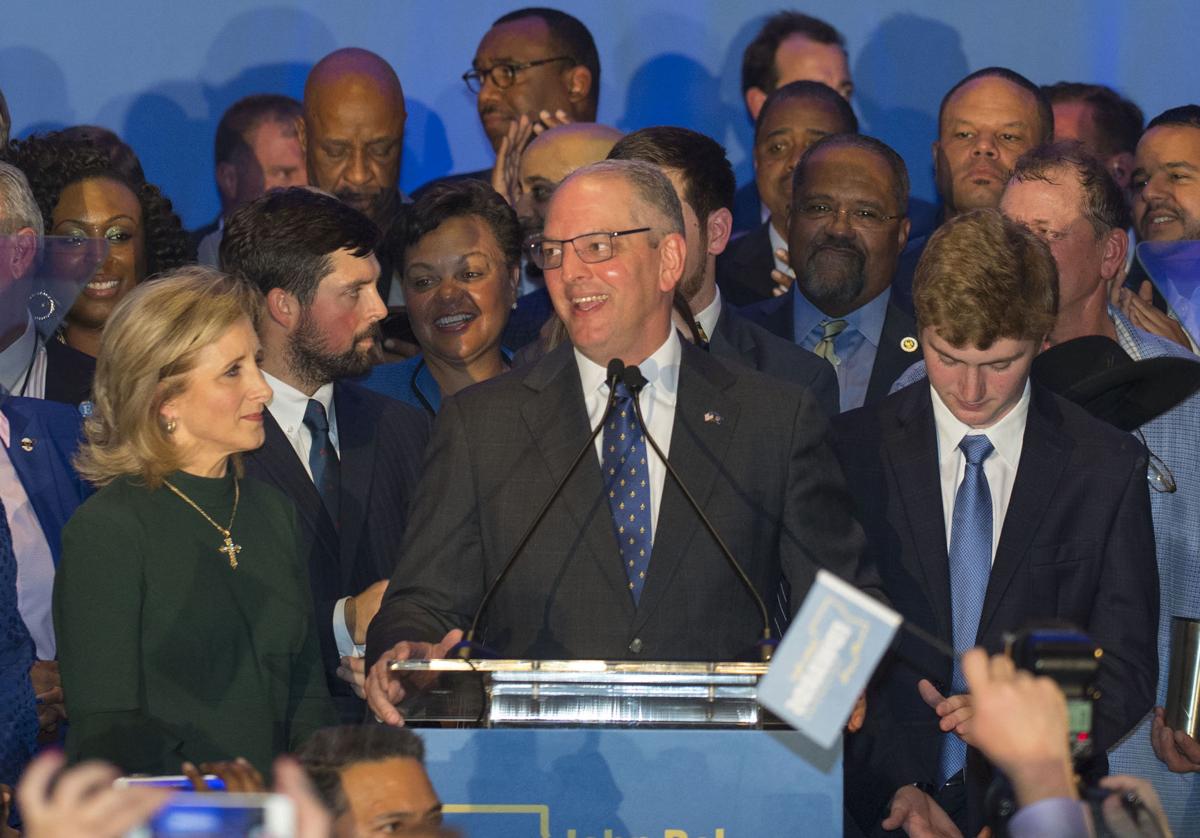 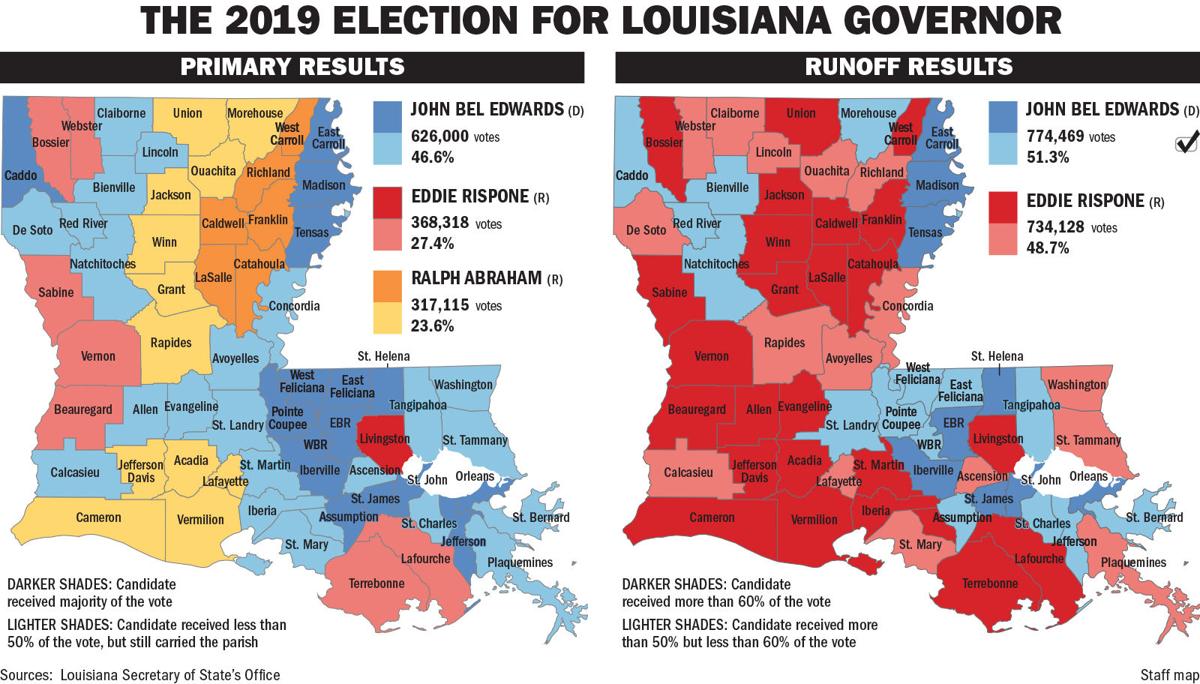 Gov. John Bel Edwards had to check off three boxes to win re-election Saturday over businessman Eddie Rispone, after narrowly falling short in the primary.

He needed to turn out dramatically more African-American voters, who form the core of the Democratic Party.

He needed to win at least 10% of the voters who had supported Republican U.S. Rep. Ralph Abraham, the third-place finisher in the primary.

And he needed to win over enough moderate, suburban Republicans in East Baton Rouge, Jefferson and St. Tammany parishes who were turned off by President Donald Trump and his tight embrace of Rispone.

Edwards put it all together for a remarkable win, overcoming an all-out effort by Trump for Rispone, the dominance of Republicans in Louisiana in recent years and more than $25 million spent by the GOP, outside business interests and his Republican opponent.

When it was all tallied, Edwards won 51.34% versus 48.66% for Rispone, a difference of 40,300 votes, according to complete but unofficial returns from the Secretary of State’s office.

“Everything came together for Gov. Edwards,” said John Couvillon, a Baton Rouge-based pollster and demographer.

The Democratic formula for a statewide candidate to win in Louisiana typically calls for taking at least 33% of the white vote and at least 90% of the black vote, and for African Americans to account for at least 30% of the overall turnout.

Edwards exceeded all of those marks on Saturday, said Couvillon, who estimated that the governor won 95% of the black vote and 33.5% of the white vote, and that black voters accounted for 30.5% of the overall turnout, up from 27.6% in the primary.

Couvillon also estimated that Edwards won 10% of Abraham’s voters, after the governor’s campaign and the pro-Edwards Gumbo PAC repeatedly reminded voters that Rispone had blistered the congressman during the primary with attack ads that Abraham said were lies.

Saturday’s election ended a bruising campaign that pitted the only Democratic governor in the Deep South against a Republican who had never before sought office and said he would do for Louisiana what Trump had done for the country.

Working on three hours of sleep Sunday, Edwards remained as giddy as the night before, when his first words to a jubilant crowd at the Renaissance Hotel in Baton Rouge were: “How sweet it is!”

The re-election victory, he said Sunday, was much more satisfying than his triumph over then-U.S. Sen. David Vitter in 2015, when Edwards won with a resounding 56%.

“People said David Vitter was such a controversial candidate or was a poor candidate because of his personal issues,” Edwards said in a phone interview. “I beat a multimillionaire this year, who was aided and abetted by the president of the United States, who made multiple visits to the state.”

Edwards won re-election by rolling up big margins in New Orleans, Baton Rouge and Shreveport – all cities governed by African-American mayors – while winning or holding his own in suburbs of New Orleans that had overwhelmingly voted Republican in 2003 when the last Democrat, Kathleen Blanco, was elected governor.

'It’s unprecedented': This fresh faced Louisiana Legislature is more conservative than ever

As Democratic Gov. John Bel Edwards enters his second term, he’s going to have to work with a Legislature that has more Republicans and more c…

Edwards won 28,000 more votes in Orleans Parish in the runoff than in the primary. And he took an extraordinary 90% of the vote there, enough for a 101,800 margin.

Ironically, the urban voters who went for Edwards voted for the son of a sheriff from Amite, population 4,141 in the 2010 census, while rural voters favored Rispone, who grew up in north Baton Rouge and now lives in the exclusive Country Club of Louisiana neighborhood.

Meanwhile, Edwards lost the 3rd Congressional District, which covers southwest Louisiana, by only a few votes in 2015, but by 21 percentage points on Saturday, said Miles Coleman, a New Orleans native who is associate director of Sabato’s Crystal Ball, which handicaps elections across the country.

“Acadiana is becoming so red now that not even a pro-life, pro-gun Democrat can win it,” Coleman said.

In triumphing, Edwards became the first Democrat in Louisiana since Edwin Edwards in 1975 to win re-election. For the next four years, he will have to continue to govern surrounded by Republicans, who continue to hold all other statewide offices and have big majorities in the state Legislature.

Powering Edwards to another four years in the Governor’s Mansion was a personal approval rating of 57%, in the last internal poll of his campaign.

But Edwards was facing a direct challenge from Trump, who had won 58% of Louisiana’s vote in the 2016 presidential election.

The president came to Louisiana three times within a month to tar Edwards as “a tax-and-spend liberal,” as he put it, echoing Rispone’s words.

Richard Carbo, Edwards’ campaign manager, said his candidate had to avoid attacking Trump even though the president was lambasting him and telling adoring crowds that the governor was pro-choice (he actually signed a strict anti-abortion bill into law this year) and was weak on the 2nd amendment (Edwards actually had been a hunter since age 9).

During the interview, Edwards said he didn’t watch any part of Trump’s rallies to avoid taking the president’s bait.

“I needed to be disciplined enough not to be angry with him and call him a liar or something like that,” Edwards said. “If I’m out there responding to their attacks, that pulls me off my message.”

Several data points emerged Sunday to show how Trump had failed to pull Rispone across the finish line ahead of Edwards.

Edwards’ vote in north Louisiana increased by 6 percentage points from the primary to the runoff, despite Trump’s visits to Monroe and Shreveport during the final 10 days of the campaign, said Edward Chervenak, who crunches political numbers in New Orleans.

Trump didn’t even provide a measurable lift in Precinct 4-8C in Bossier City, which includes the CenturyLink Arena, where Trump rallied conservatives on Thursday night. Coleman found that Edwards went from losing to Vitter 42-43 there in 2015 to winning 84-67 over Rispone.

To Chervenak, the results show that “Trump is as likely to galvanize opposition as likely as he is to mobilize supporters.”

John Carmouche, a Baton Rouge-based trial attorney who has sued oil and gas companies on behalf of coastal parishes, spent hundreds of thousands of dollars on ads in north Louisiana and on a get-out-the vote campaign particularly in Baton Rouge and New Orleans.

Scott Arceneaux, a Louisiana native, returned from Florida to oversee the Democratic Party’s get-out-the-vote effort, just as he had done for the 2015 runoff.

Under Arceneaux, the party targeted 220,000 African-Americans who had voted in the 2016 or the 2018 elections but had stayed home for this year’s primary.

“We made a full court press with digital advertising, direct mail, texting, phone calls, the whole gamut, to motivate them to vote,” Arceneaux said.

John Bel Edwards: 'It is an easier state to govern when the Saints and LSU are winning'

Don't underestimate how much college and pro football in Louisiana can impact what it's like to be the state's governor. That's what John Bel …

Ron Nabonne, a veteran political operative in New Orleans, helped coordinate a volunteer effort that consisted of alumni groups at Dillard and Xavier universities and such organizations as 100 Black Men.

“Edwards was able to get the black turnout that he needed,” said Coleman.