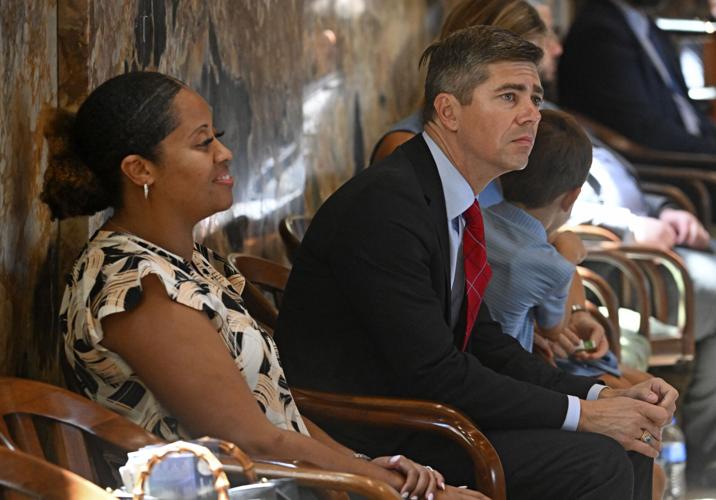 Syrita Steib, left, sits with Luke Mixon during a meeting of the state Democratic Party, Saturday, August 13, 2022, at the Louisiana State Capitol in Baton Rouge, La. From left, US Senate candidate Gary Chambers speaks with Cleve Dunn, Jr. and Rep. Edmond Jordan during a meeting of the state Democratic Party, Saturday, August 13, 2022, at the Louisiana State Capitol in Baton Rouge, La.

Syrita Steib, left, sits with Luke Mixon during a meeting of the state Democratic Party, Saturday, August 13, 2022, at the Louisiana State Capitol in Baton Rouge, La.

From left, US Senate candidate Gary Chambers speaks with Cleve Dunn, Jr. and Rep. Edmond Jordan during a meeting of the state Democratic Party, Saturday, August 13, 2022, at the Louisiana State Capitol in Baton Rouge, La.

The Louisiana Democratic Party last weekend bypassed a party sub-committee recommendation to support only Gary Chambers Jr. as its candidate in the uphill battle this fall to unseat U.S. Sen. John Kennedy, a Republican.

Instead, party officials overwhelmingly voted to co-endorse Chambers and two other candidates: Luke Mixon, who is White, and Syrita Steib, who like Chambers is Black.

Since then, Chambers has accused party chair Katie Bernhardt, who is White, of orchestrating the move to endorse all three Senate candidates, saying that Bernhardt doesn’t believe a Black candidate can win statewide. Chambers wants her to resign.

Bernhardt, who has no plans to quit her post, has dismissed Chambers’ accusations, saying the concern of many Democrats is that he is too far to the left.

“It’s a progressive vs. moderate battle, not a racial battle,” Bernhardt said. “To say this is White favoritism is disrespectful to all the leaders in the process. I want to see all of our candidates, whether they come from the progressive or moderate wings of our party, to raise money, run strong campaigns and win elections. This race is no different.”

Chambers’ complaints expose long-simmering disagreements within the party on the best way to win elections: Is it better to choose a Democrat with a full-throated progressive message to try to galvanize voters, or a candidate who hews to the center and likely has greater appeal to independents and moderate Republicans?

It's a debate that also plays out repeatedly nationally among Democrats – think Joe Biden v. Bernie Sanders in 2020. But it’s complicated further here by White voters’ steady flight from the Democratic Party over the past 20 years, turning Louisiana into a red state. About 60% of Democrats in Louisiana now are African-American, yet no African-American has won a statewide election since 1872.

To be sure, White Democrats also have fallen short in recent years, though Gov. John Bel Edwards is a notable exception. But he is the only Democrat who holds statewide office, and White Democratic candidates lost Senate races in 2010, 2014 and 2016. Shreveport Mayor Adrian Perkins, who is Black, finished second in the 2020 Senate election with only 19% of the vote.

“The split that you see within the Democratic Party in Louisiana is an argument over what’s the best path to be competitive statewide,” said Albert Samuels, who chairs the political science and geography departments at Southern University. “Democrats have struggled over how to win statewide elections.”

Chambers is the most left-leaning of the three candidates in the Senate race, having made his mark by agitating for voiceless Blacks against the political establishment and for Whites who want systematic change. In provocative campaign ads this year, he has smoked marijuana, burned a Confederate flag and shot a handgun at a cardboard cutout of a Ku Klux Klan figure.

Mixon is closer to the other end of the Democratic spectrum. He is a Naval Academy graduate and former fighter pilot who opposes abortion but says he would vote to legalize the procedure nationwide to ensure that women who are impregnated through rape or incest have a right to the procedure. He has the endorsement of Edwards, whose opposition to abortion and support of gun rights makes him more conservative than the national party.

Steib is more progressive than Mixon, supporting abortion rights without qualifications. She spent 10 years in prison for participating in the burglary and arson of a Texas auto dealership and was pardoned just before then-President Donald Trump left office last year. She advocates for women reentering society from prison.

Kennedy is heavily favored over all of them to win a second six-year term. He has the support of Trump, easily the dominant figure in the Republican Party, has a solid conservative voting record during his 5½ years in office and had raised $28 million as of July 1. Combined, the three top Democratic candidates had raised only $2.2 million.

The ideological split in Louisiana last played out in a big way in 2021, during the special election to replace Cedric Richmond in a congressional seat anchored in New Orleans that stretches to Baton Rouge.

Then-state Sen. Troy Carter ran as a Biden-type Democrat, supporting abortion rights and tighter controls on pollution in Cancer Alley. He also quietly courted the support of local Republicans by saying he could work with people in both parties.

“There’s no evidence that Louisiana Democrats or Louisiana general election voters want to lurch to the left,” said Carville, who is supporting Mixon. “The people who win are people like John Bel and Troy.”

But Chambers argues that during a time of sharp political polarization, only a Democrat who unapologetically stands for abortion rights and against corporate interests can energize voters.

Chambers has noted that Mixon supported then-U.S. Sen. John McCain, a Republican, in the 2008 presidential election over Barack Obama – Mixon says he wanted to support a fellow Navy veteran and voted for Obama in 2012, Hillary Clinton in 2016 and Biden in 2020.

Chambers argues he can turn out the large number of Black voters who have stayed home in recent races – and that they can spell the difference.

Carville disagrees, pointing to a November study by the Pew Research Center that broke voters in each party into four different categories and found progressives were the smallest Democratic group.

“The ‘dormant voter’ theory – that voters are ready to be activated to push the progressive button – has been looked at and found not to be the case,” Carville said. “That has been studied and re-studied.”

Nonetheless, Chambers believed that party rules called for the full party to endorse him. The party’s executive committee also had endorsed Davante Lewis, a policy analyst in Baton Rouge who favors a greater emphasis on renewable energy, for a seat on the Public Service Commission. That endorsement was perhaps even more unusual, given that Lewis is challenging a Democratic incumbent, Lambert Boissiere III, of New Orleans.

But on an 88-36 vote, the full committee approved a motion to endorse Chambers, Mixon and Steib in the Senate race and all five candidates in the Public Service Commission district, which is centered in New Orleans but extends to Baton Rouge. The vote meant that all the candidates have the party’s official seal of support and can coordinate with the state party to receive up to $10,000 more per donor.

“The multi-candidate endorsement was a way for us to reconcile the progressive and moderate wings of our party,” Bernhardt, a businesswoman and lawyer in Lafayette, said later.

But Chambers said Bernhardt told him last October that she didn’t think a Black man could win statewide. Bernhardt has said she actually told Chambers that he was getting into the race too late to win. But two of his supporters – East Baton Rouge Parish Council member Cleve Dunn Jr. and state Rep. Edmond Jordan, of Brusly – corroborate Chambers’ account, saying they attended the meeting at the Democratic Party’s headquarters in Baton Rouge.

Chambers cried foul immediately after last Saturday’s vote, putting much of the blame on racism.

But a number of Black elected officials who participated in the process disagree. The resolution to issue multi-candidate endorsements was offered by C. Denise Marcelle, a Black state representative from Baton Rouge.

Marcelle said afterward that she favors a level playing field because the rules had been changed before the meeting, and most state central committee members didn’t realize that. She said she supports Chambers and Lewis, but didn’t think they alone should get the party’s nod.

Lisa Diggs, the clerk of Second City Court in New Orleans, who is Black, was one of several committee members who spoke in favor of Marcelle’s resolution.

“We are a large tent,” Diggs said. “We are not in a position to have this party in Louisiana divided by choosing one candidate.”

And while Chambers says the party has opposed him at every turn, Bernhardt notes that Democrats issued a multi-candidate endorsement for him, Peterson and Carter in last year’s congressional election.

Still, the optics of not endorsing Chambers alone in the Senate race don’t look good, said Samuels, the Southern professor.

“You open yourself up to charges,” he said. “Why were the rules changed?”

Silas Lee, a veteran Democratic pollster in New Orleans, said Chambers and other Democrats need to spend less time on intra-party battles that appeal only to political insiders and more time on rebuilding the party neighborhood by neighborhood, as Stacey Abrams has done in Georgia. It’s now a purple state with two Democratic senators.

“Endorsements don’t go to the polls,” Lee said. “Voters do. I’ve seen candidates with all the endorsements in the world, but they still lose. Candidates have to present themselves as the viable alternative.”